Meet the most endangered animals in the world, including the Javan rhino, vaquita, mountain gorillas and Asian elephants. Plus we recommend where you can still see them in their natural habitat… 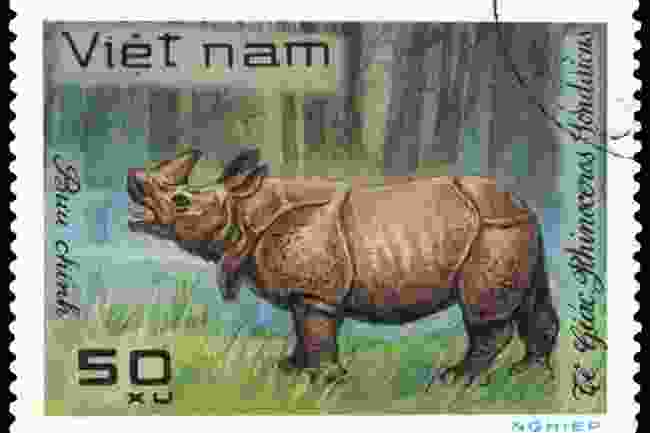 Once the most widespread of Asian rhinos, Javan rhinos are now listed as critically endangered. With only one known population in the wild, it is one of the world's rarest large mammals.

There are between 58 and 68 in the wild, with none living in captivity. The rhinos are often poached for their horns, although loss of habitat, especially resulting from the Vietnam War, has also contributed to their decline.

The only population of Javan rhinos can be found in Ujung Kulon National Park on the south-western tip of Java, Indonesia. The only other population, in Vietnam, was wiped out in 2010. 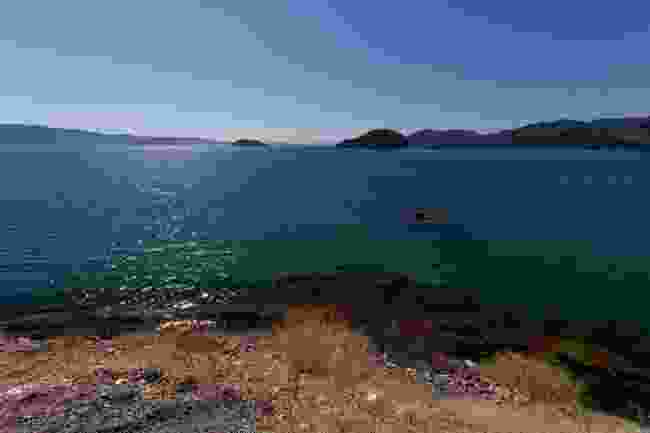 The Sea of Cortez, or Gulf of California, where the few remaining vaquita live (Shutterstock)

The vaquita is considered the rarest endangered marine mammal in the world. Sadly, the future looks bleak for this small porpoise, with just 10 left in the wild.

Found solely in the northern part of the Gulf of California, Mexico, they are fairly easy to spot due to the shallow water that they inhabit - lagoons generally no deeper than 30m. They'll quickly scarper if a boat sails by, though.

In the last few years, the population has dwindled at an alarming rate. Fishing nets, chlorinated pesticides, irrigation and inbreeding are just a few of the threats causing the species to teeter on the brink of extinction. 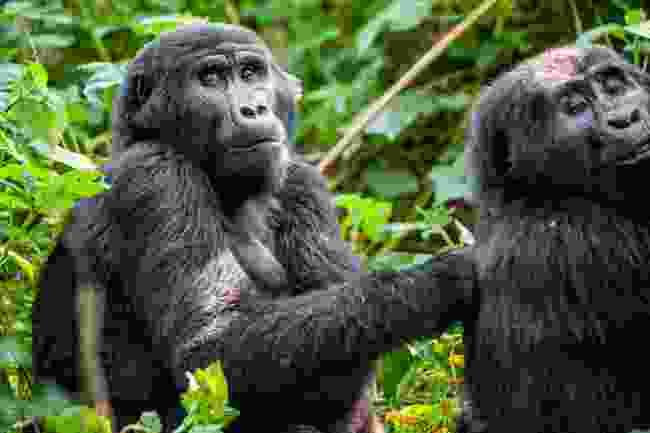 Today, around 1,063 mountain gorillas are thought to exist in the wild, and the future is looking brighter for these rare primates.

Since 1981, the gorilla population has almost doubled. 30 years ago, experts feared they were soon to be extinct. Thanks to intensive conservation efforts, mountain gorillas were moved from 'critically endangered' to 'endangered' on the IUCN red list in 2018.

There are two mountain gorilla populations for travellers to visit. One group can be found in the Virunga volcanic mountains of Central Africa across three national parks: Uganda's Mgahinga National Park, Rwanda's Volcanoes National Park and DR Congo's Virunga National Park (although this has been closed to tourists due to a recent violent rebellion).

The other population inhabits Uganda's Bwindi Impenetrable National Park. You're most likely to see mountain gorillas in Rwanda or Uganda, and you're unlikely to return disappointed. At the beginning of the 20th century, there were 100,000 tigers in the world. Today, this number is estimated to have dwindled to around 3,900 in the wild.

Tigers need large areas of habitat, but living in some of the most densely populated places on Earth has placed them in locations that have caused significant conflict with humans. Habitat destruction and fragmentation has had the most significant effects on the tigers' habitats, and poaching is one of their biggest threats.

India is the best country to see tigers in the wild, but you can also spot tigers in Bangladesh, China, Sumatra, Siberia and Nepal.

Here are the best places to spot tigers in the world 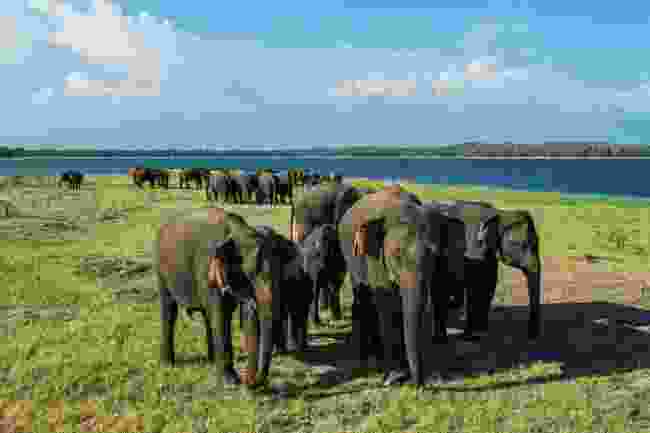 Asian elephants have been considered an endangered species since 1986, as their population has decreased by at least 50% over the last 75 years or so. There are fewer than 50,000 remaining in the wild.

Fragmentation, deforestation and an increasing human population are destroying the elephants' habitat and decreasing the space available for them to live in.

The Sri Lankan, Indian and Sumatran Asian elephants can of course be found in their countries of name and other mainland Asian countries.

However, the best opportunity to see Asian elephants is at The Gathering, a natural assembly of up to 300 elephants coming to the shores of the Minneriya Tank in Sri Lanka's Minneriya National Park during August to bathe and drink. It is the largest congregation of Asian elephants in the world. 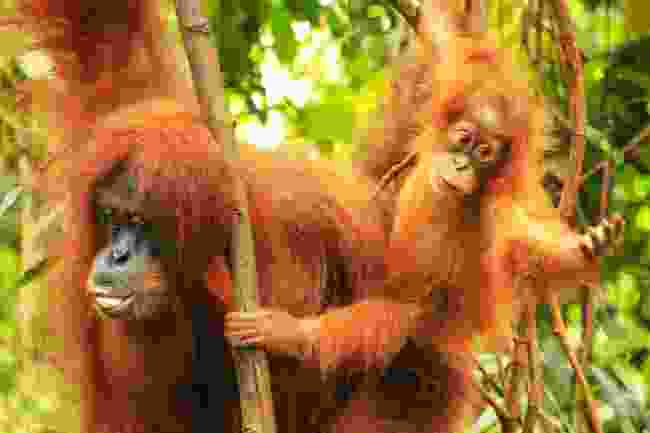 A Sumatran orangutan and its baby swinging (Shutterstock)

Once widespread, the orangutan has been considered critically endangered since 2000, and is one of the world's most endangered primates. A century ago, more than 230,000 orangutans lived in our world, but their numbers have now dropped by around half.

Over 104,000 Bornean orangutans still live in the wild, and can be found in both Malaysian and Indonesian Borneo. There are just 14,000 Sumatran orangutans left, naturally living on the Indonesian island of Sumatra.

The rarest of all is the newly-discovered Tapanuli species, with just 800 left in the wild. If you're lucky, you'll also be able to spot Tapanuli orangutans in the Batang Toru eco-system of Sumatra's north. As of late 2019, their habitat is under serious threat by the build of a controversial new hydropower plant, near the Batang Toru River.

The 5 best places to see orangutans 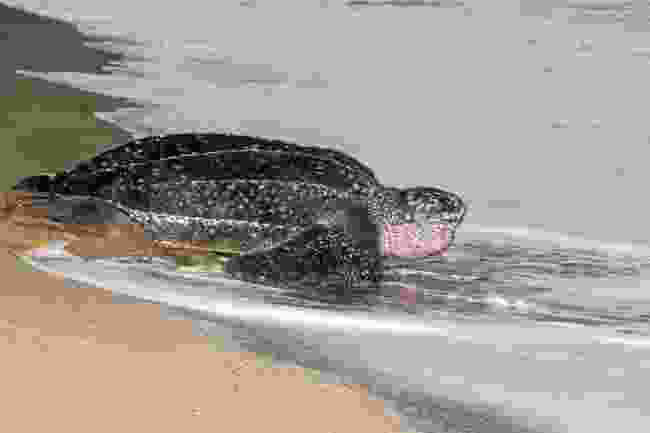 Leatherback sea turtle heading back into the water (Shutterstock)

In between 26,000 and 43,000 female sea turtles nest annually; a dramatic decline from the estimated 115,000 in 1980. Young turtles are incredibly vulnerable and sadly, very few make it to adulthood.

Birds and small mammals often dig up turtle nests in order to eat the eggs. Once they've hatched, birds and crustaceans pick them off before they can make it to the sea, and fish, squid and octopuses often prey on them if they do manage to make it into the water.

The Mayumba National Park beaches in Gabon host the largest nesting population on the African continent. April is the time to visit, when around 30,000 turtles descend on the park's beaches to lay their eggs. 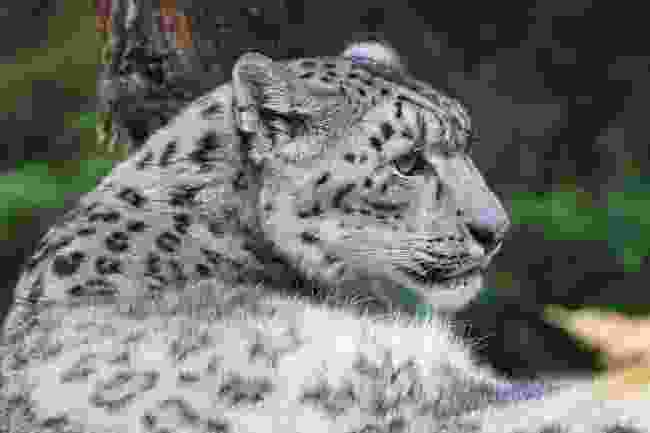 One of the few thousand remaining snow leopards (Dreamstime)

The wild snow leopard population is estimated to be between 4,080 to 6,590. They're found in 12 countries in Central Asia: China, Bhutan, Nepal, India, Pakistan, Afghanistan, Tajikistan, Uzbekistan, Kyrgyzstan, Kazakhstan, Russia, and Mongolia.

The species is threatened by herders who kill snow leopards to prevent them from preying on their livestock. Poachers, and a significant decrease in the leopards' wild prey, are also an issue. 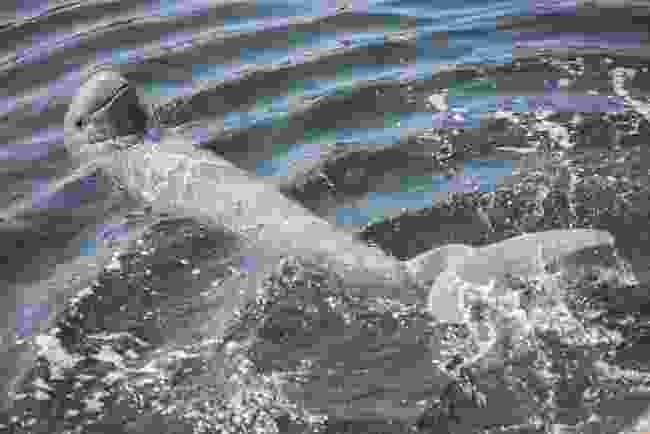 The irrawaddy dolphin is classed as endangered by the ICUN, and it's little wonder. Reports as of 2020 suggest there might be less than 100 left, making them an incredible sighting in the wild.

If you were hoping to spot this playful-looking mammal in its natural home, you'd be heading off to the south of Asia. They've been spotted in the Ayeyarwady River in Myanmar (Burma), the Mahakam River in Indonesian Borneo and in the Mekong.

Indeed, the irrawaddy dolphin may be best spotted by travellers in the Mekong, as they're known to live and swim in 118 miles of the river between Laos and Cambodia. Here, 92 individuals have been accounted for. 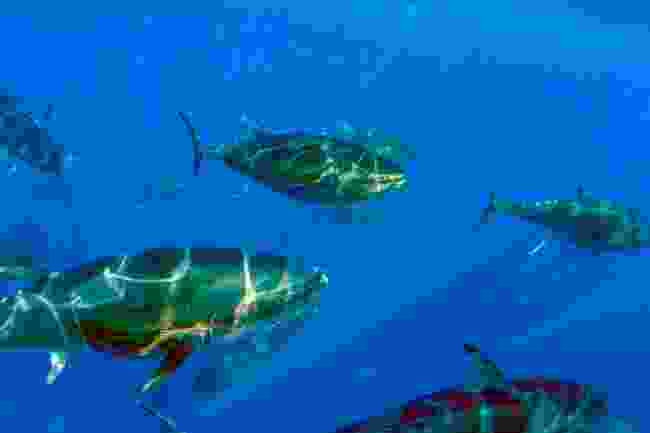 Overfishing is the main cause for the destruction of this species due to their commercial value as food. They have been heavily targeted for the Japanese fish market, where they are highly sought-after for sushi and sashimi. However, farming is the most serious threat to the species, as the tuna are taken from the wild before they are old enough to reproduce.

Where to travel to find the world's great creatures:

Where to see rhinos in the wild

Where to spot leopards in Africa

The best places to see jaguars in the wild

Where can you see wild lions?