Year-round adventures await in Hokkaido: 7 things to do in this part of Japan

With a new direct flight meaning Hokkaido can be reached by Helsinki in just nine hours, now’s the perfect time to explore this part of Japan, from its adventure-ready capital to the nature on its doorstep

Sapporo enjoys up to six metres of snow every winter, making it one of the best cities for snow adventures in the world, and creating the most striking winter cityscape in Japan. This mass of snow serves as a backdrop for the giant snow sculptures of the annual Sapporo Snow Festival in February, plus outdoor pursuits such as skiing the slopes of Sapporo Kokusai Ski Resort and Sapporo Teine, snowshoeing in Moerenuma Park, or cross-country skiing at Nakajima Park in the city centre. There is also plenty to see and do in the heart of the city for those in need of a culture fix.

And after a day out in Sapporo’s snow, nothing warms the bones as well as Sapporo signature dishes such as miso ramen and soup curry. Except maybe a soak in an onsen, or hot-spring bath. For the latter, head to a hot-spring town such as Jozankei Onsen, an hour from central Sapporo, where people have been enjoying the soothing, hot waters for generations.

In Hokkaido’s far northeast, the wilds of Shiretoko National Park are wonderful year-round, but in the region’s long winter they really come into their own. With the land covered in snow and drift ice carpeting the ocean, Shiretoko becomes the setting for some unforgettable activities. On land, you could take a fat bike for a ride across the snow or go snowshoeing with a nature guide, taking in frozen waterfalls and perhaps spotting Ezo red foxes or Ezo deer.

Offshore, you could don a dry suit to go for a walk on the creaking drift ice or head out on the Aurora icebreaker for views of the dramatic coastline and birdlife including Steller’s sea eagles and white-tailed eagles. If you are feeling especially adventurous, you could even go diving under the ice.

Just 90 kilometres from Sapporo, Niseko has become one of Asia’s premier winter sports towns, with high-quality powder snow and top-class facilities well-geared to visitors from overseas. The fun is centred around four interlinked ski and snowboard resorts that receive more than 15 metres of snow each winter, together combining to deliver something for every level of skier and snowboarder – from picturesque tree runs and moguls to night skiing.

Beyond that there are also opportunities for backcountry skiing, snowmobiling and even snow rafting, while after all the exertion you’ll find the muscle-soothing hot-spring baths of Goshiki Onsen and plenty of places in and around Niseko’s resorts to shop, drink and try the regional flavours of Hokkaido.

4. Immerse yourself in Sapporo's nature

Although Sapporo has a population of almost two million, it still breathes in tandem with nature. Running 12 blocks through the centre of the city, Odori Park is one obvious example of that, with its greenery, flowers and summer festivals helping to give Sapporo its laidback feel.

Elsewhere there’s the 70-hectare Maruyama Park, home to wooded nature trails, an array of birdlife and plant life, and Hokkaido-jingu Shrine – a tranquil and traditional spot that blends seamlessly into the natural surrounds. About five kilometres southwest of central Sapporo, Mount Moiwa adds another dimension. Whether you walk up or opt for the cable car, the end result will be sweeping views back over the city from the 531-metre peak.

5. Go green in the national parks 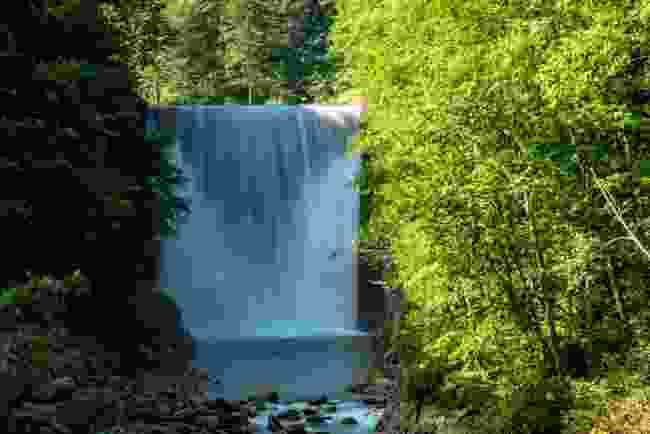 With refreshing, cool temperatures—while Tokyo, Kyoto and other parts of Japan swelter—the six national parks spread across Hokkaido provide the best summer escapes in Japan. All of them offer the chance to explore pristine wildernesses that are home to an incredible range of wildlife and flora and fauna, and together provide ample opportunities to trek through jagged mountain ranges, hike around caldera lakes or take in volcanic landscapes accented by delicate alpine plants – maybe even spot a bear or two in the process.

There’s also plenty for water sports fans. You could raft down the crystal-clear waters of the Sorachi River in Daisetsuzan National Park, sea kayak around rugged Rishiri Island in Rishiri-Rebun-Sarobetsu National Park or canoe through protected marshland in Kushiro-Shitsugen National Park.

Although typically hearty and warming, befitting a northern city that spends months covered in snow, local culinary specialties are a highlight of a trip to Sapporo at any time of year. With miso ramen, the city delivers a rich version of Japan’s favourite noodles, while the city’s soup curry has become a Hokkaido soul food – not too dissimilar to a mulligatawny. Or there’s jingisukan mutton barbecue, which arguably is the best partner for a crisp Sapporo Beer, although the city also has plenty of beer gardens for trying that in the warmer summer months.

From crab to creamy sea urchin, Sapporo also serves up some of the best seafood in Japan. It doesn’t have to be expensive either: stop by markets such as Nijo or Jogai to try the super-fresh sushi sets or donburi rice bowls topped with fish roe, scallops and in-season raw fish.

7. Immerse yourself in culture

In Sapporo, there are many ways to experience local culture, new and old. Long before Sapporo became a city the late 1800s, Hokkaido’s indigenous Ainu were living in harmony with nature here for millennia, something you can learn about by visiting the small Northern People’s Museum or with a side trip an hour out of the city to the new Upopoy National Ainu Museum and Park.

Much more recently, Sapporo has blossomed into a centre for the arts, hosting the triennial Sapporo International Art Festival as well as being home to numerous galleries and ground-breaking art venues created to blend into the natural environment; places such as the Isamu Noguchi-designed Moerenuma Park and Tadao Ando’s Hill of the Buddha, the latter of which features a 13.5m Buddha statue poking its head out of a cavernous underground shrine.

Find more year-round adventures in Hokkaido by heading over to the official website.