Want to see tigers in the wild? We’ve put together the top 10 places in India where you can see the big cats with your own eyes… 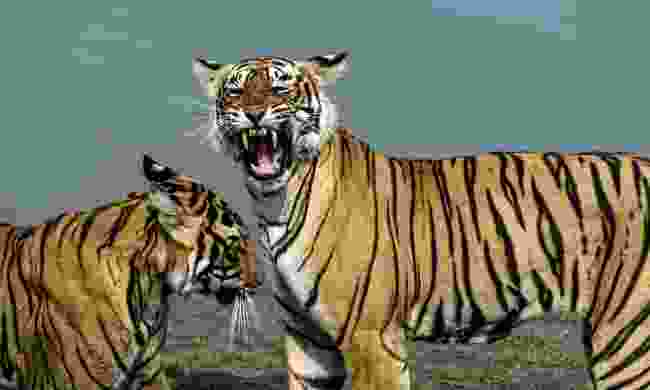 Chance of a sighting: Considered to be the best place in Rajasthan to spot the elusive tiger, now may be a better time than ever to go due to the recent increase in tiger numbers. There are thought to be more than 60 tigers in the park (at the time of writing) so you’re very likely to spot the big cat.

Other wildlife: Keep your eyes pealed for leopard, sloth bear, jackal, hyena, mongoose, the elusive Indian wolf and even crocodile. The birdlife is sensational with the varied terrain and abundance of water attracting more than 270 species of bird (parakeets and pelicans galore).

Need to know: Dress for the season! For visits between April and June you'll need the lightest of clothes, a hat and sunglasses. November – February can get very cold in the mornings and evenings, so layer up and ensure you have a pair of gloves with you. 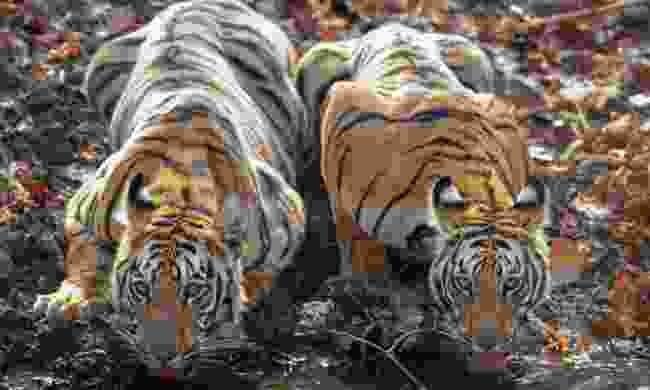 First glance: At 1,727 Sq km, this is the largest national park in Maharashtra and also one of the most beautiful with dense teak forest, meadows and deep valleys.

Chance of a sighting: Good. You’ll see few other tourists and the tiger population is thought to be at more than 60. And with a large number of jeep safaris departing everyday, even if it gets busy you'll be able to track down the striped creatures.

Need to know: To increase your chances of spotting a tiger, visit between March and May where the temperatures are high and they come out to drink. 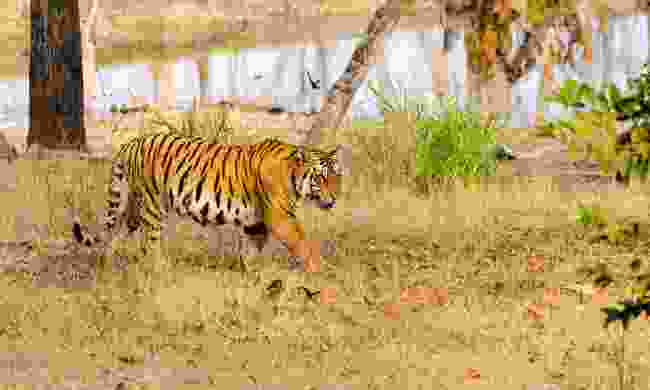 Chance of a sighting: The waterholes are probably your best bet for a tiger encounter, although anywhere around the park can be rewarding.

Other wildlife: Chital, gaur, wolf, antelope, sloth bear and a wide variety of bird. Fingers crossed for the Indian leopard.

Need to know: The park is closed from the beginning of July until mid October. 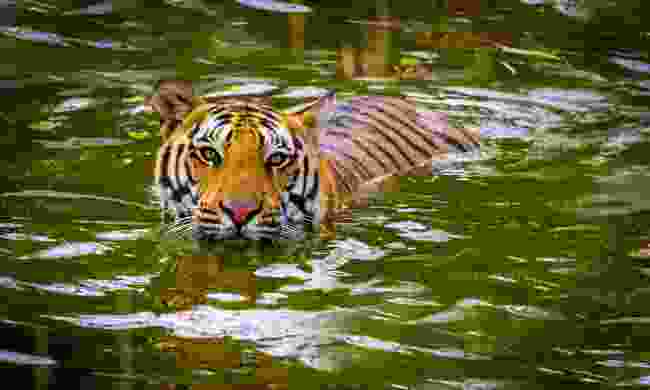 Tiger resting in the water at Corbett National Park (Dreamstime)

First glance: Named after hunter-turned-conservationist Jim Corbett, this beautiful park is draped over the Himalayan foothills in a rich mosaic of dense forests and wide river plains.

Chance of sighting: They’re out there, somewhere, but the dense vegetation means tiger encounters are hit-and-miss. Follow the alarm calls of birds and monkeys – they’re your spies in the jungle.

Other wildlife: Those aren’t boulders, they’re wild Asian elephant grazing the floodplains. Look out for gharial crocodile, too, plus a full cast of Indian safari wildlife. Corbett’s birding is some of the best in Asia.

Need to know: Not only is visiting in the winter (October – February) a great time to see Bengal tiger, it is also the best time to enjoy the huge variety of birdlife. 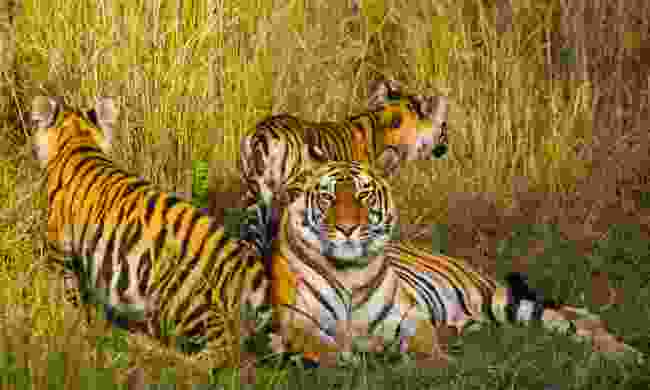 First glance: Steeped in history, this former royal hunting reserve in the Vindhyan Hills has an ancient fort perched atop an 800m-high plateau.

Chance of sighting: Better than most – Bandhavgarh has one of the world’s highest tiger densities. And you won’t just see the Bengal tiger, but will likely see the white tiger, too.

Need to know: The park has been divided into three major zones: visit the Tala zone for your best chance of spotting a big cat. 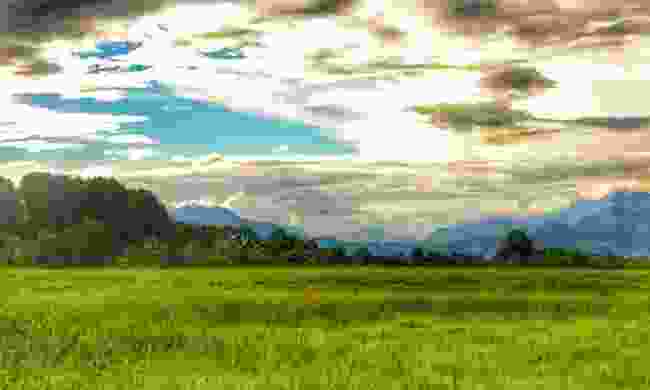 First glance: World heritage site extending into Bhutan and encompassing grasslands and forests along the banks of the Manas River in the Himalayan foothills.

Chance of sighting: Despite the high number of tiger here, (the population doubled between 2010 and 2018) the thick forest makes sightings very difficult. Still, it is an exciting, little-visited territory to explore.

Other wildlife: Elephant, the golden langur, pygmy hog, and many species of bird including the great hornbill and red-headed trogon.

Need to know: The opening and closing of the park depends on the time of sunrise and sunset. Be aware the sun goes down early in November (4:30 pm), so you'll have less time in the park. 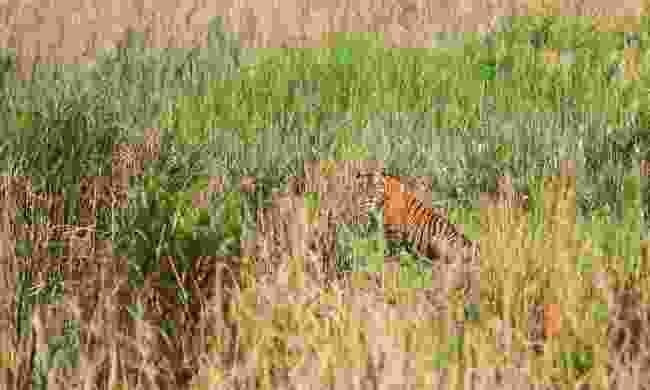 A tiger hiding in the grass in Kaziranga National Park (Shutterstock)

Chance of sighting: Quite slim – it’s a jungle out there; blink and all you may see is a stripy tail vanishing into the grass. But with evidence of kills, pug marks, and territorial markings, you’ll sense the tiger the whole time you’re there.

Other wildlife: More than 90 per cent of the world’s Indian greater one-horned rhinoceros call this park their home (at the time of writing). Large herds of elephant and buffalo are also present, along with swamp deer and a huge amount of bird, including pelican.

Need to know: The best way to ensure you see as much wildlife as possible, including the rhino and tiger, is by booking a jeep safari. There is a morning slot starting at 6:30 am and the afternoon safaris depart at 2:30 pm. 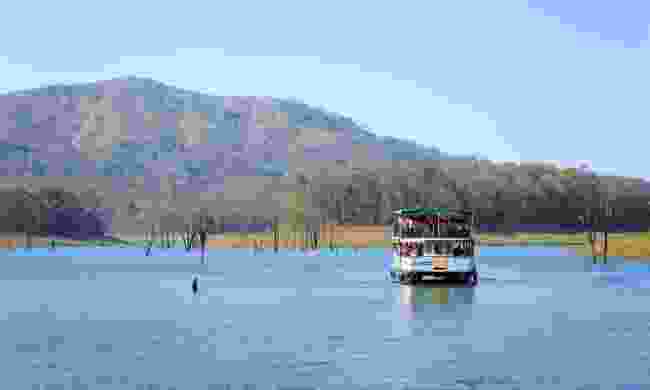 First glance: Lush forests in the Cardamom Hills of the Western Ghats.

Chance of sighting: Slim; most visitors join boat trips, but they can be crowded and noisy.

Need to know: Increase your chance of seeing the elusive cat by visiting in the summer, where tigers are more easily spotted as they'll come to the water's edge to drink. Go during winter and if you're lucky, you may spot a tiger with its cubs. 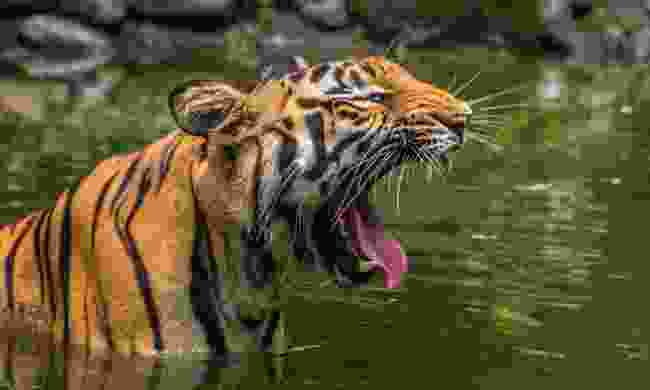 First glance: A huge park spread across the Ganges Delta, the Sunderban is a gloriously muddy mishmash of tidal waterways, mudflats and mangrove forest.

Chance of a sigjting: A stronghold for the Bengal tiger, but the swampy nature of the place makes them hard to spot. Seek advice from local honey collectors.

Other wildlife: Wild boar, spotted deer and porcupine. Head to the water for fabulous marine life as well as fishing cats searching for a meal.

Need to know: Not only is winter a great time to see the Bengal tiger, it's the best time of year to enjoy shark, turtle, dolphin, and saltwater crocodile sightings, along with other marine life. 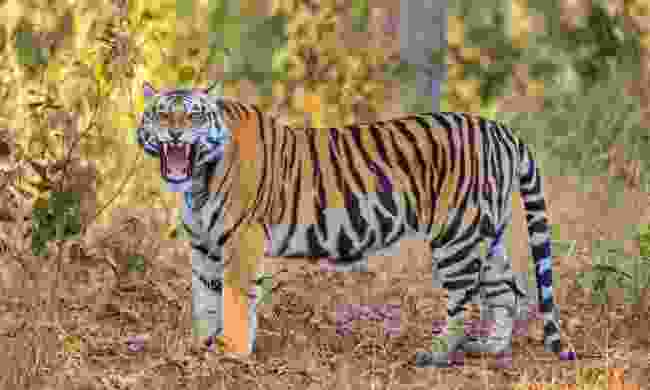 Chance of sighting: In this area of significant tiger numbers, stake out grassland areas for a chance to see the big cats hunting.

Other wildlife: The park is renowned for its swamp deer, but you’ll also find wild dog, wild boar, jackal, hyena, barking deer and Indian flying fox. 220 bird species include forest beauties such as the Malabar pied hornbill. There’s also a wide range of bird including water bird such as stork and heron, ground bird such as partridge and quail, and birds of prey such as eagle, and even vultures.

Need to know: Timing is everything! You will have a better chance of spotting wildlife if you start your safari very early in the morning or in the evening.