Rare treats: The best places to still see rhinos in the wild

Following the sad news that Sumatran rhinos have become extinct in Malaysia, Lyn Hughes reveals the best places to see these magnificent horned beasts around the world, and how to help protect them... 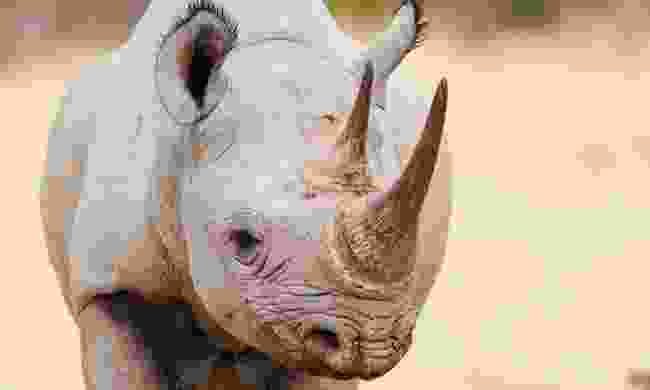 As the first African country to incorporate environmental protection into its constitution, it’s no surprise Namibia has been such a huge conservation success story in recent years. Over 40% of the country is under some sort of protection, with local community conservancies accounting for over 19 per cent of that. Communities benefit from tourism activities, which creates jobs and revenue in rural areas.

Not only is Namibia one of the only countries where the lion population is increasing, but the numbers of black rhino have grown to more than 1,700 in the past few years, with the rhino population almost quadrupling in the area over the last three decades. A few hundred white rhino live here, too.

The main populations can be found in Estosha National Park and the Kunene area, the Palmwag Reserve, and also on private land and in community-run conservancies under a unique custodianship programme.

Uniquely, the south-western black rhino of the Kunene region are desert-adapted, covering huge areas, climbing mountains and drinking only every few days. White rhinos can be found in Etosha National Park and the Waterberg. 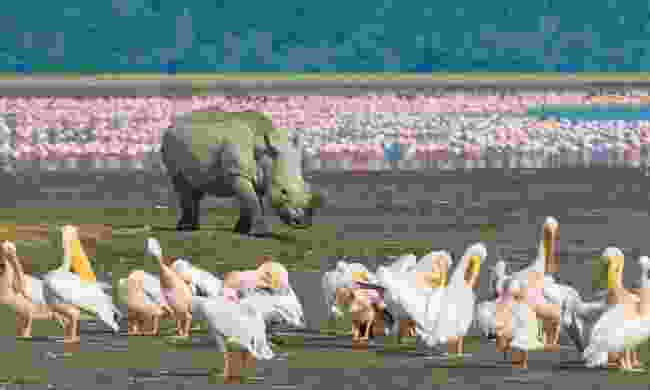 Although there are rhinos in some of Kenya’s national parks (try the Mara Triangle for the best chance), more than half of the country’s rhinos live in heavily guarded private reserves.

The not-for-profit 90,000-acre Ol Pejeta Conservancy has the largest population of black rhino in East Africa; over 100. The conservancy was also home to Sudan, the last male northern white rhino, before he died, and where you'll find the last two northern white rhinos still alive, both females. It is hoped they will provide a breeding population with Sudan's semen, saved for posterity. Ol Pejeta has a range of accommodation and welcomes day visitors too.

Lewa is another inspirational example of a successful private conservancy and like Ol Pejeta, ensures that the local communities benefit. Lewa also offers a wide range of accommodation options. 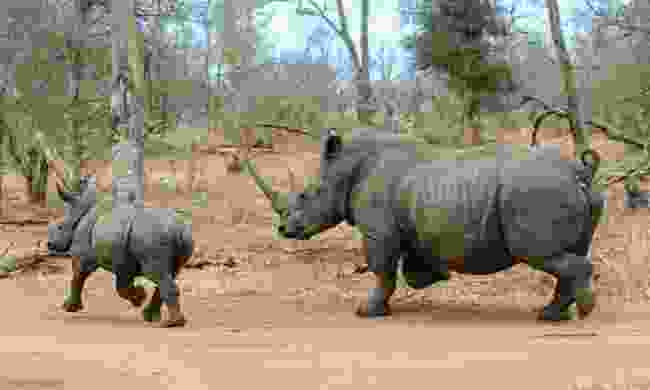 The Kingdom of Eswatini may be small, but it punches well above its weight, being one of the best places in Africa to see free-roaming rhino.

Beautiful Hlane Royal National Park is home to a wide range of flora and fauna including lion, giraffe, vultures, the placid white rhino, and the occasional black rhino. You can self-drive, or by booking onto a ‘Rhino Drive’ you get the opportunity to approach the rhino on foot, giving you an astonishingly close view.

Mkhaya Game Reserve in the south-east is rugged bushland dotted with thorn trees, which makes it probably your best chance of seeing black rhino in the wild in Africa. Get intimately close with a guided tour on foot. You’ll also see elephant, hippo, buffalo and birds.

Both reserves have varied accommodation options and offer excellent value for money compared to many African parks and reserves. 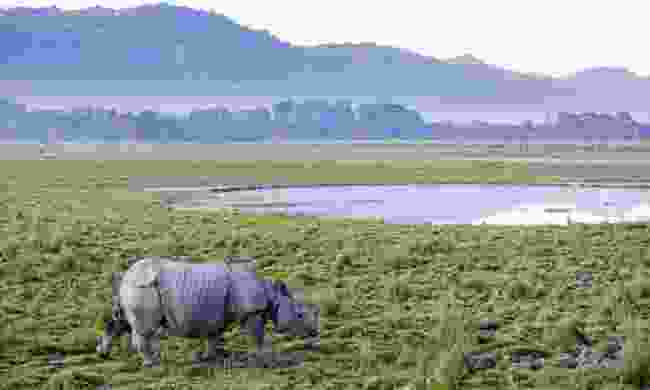 Only 600 one-horned rhinos remained in Asia in 1975, but now, thanks to strict protection from Indian and Nepalese wildlife authorities, these numbers have increased to between 3,500 to 3,600.

Around two thirds of these live in Assam’s magical Kaziranga National Park. You are almost guaranteed to see one-horned rhinos on the open plains here and you can see the Jurassic-like creatures either on a jeep or elephant safari.

Kaziranga, bordered in the north by the Brahmaputra River, is a mix of forest grassland, marsh and pools. It floods in summer during the monsoon – the river bursts its banks – and 2012 was a particularly tough year, with some rhinos lost to high floodwaters and poaching.

Going between November and February, when the climate is mild and dry will increase your chances of spotting rhino.

The park has a significant tiger population too and its name has been extended to include ‘Tiger Reserve’, though you’d be very lucky to spot one in the tall elephant grass.

Other mammals here include elephant, swamp dear, and sloth bear, while there are 490-plus species of birds. Book onto the park’s birdwatching tour for 4-days of spotting the various species. 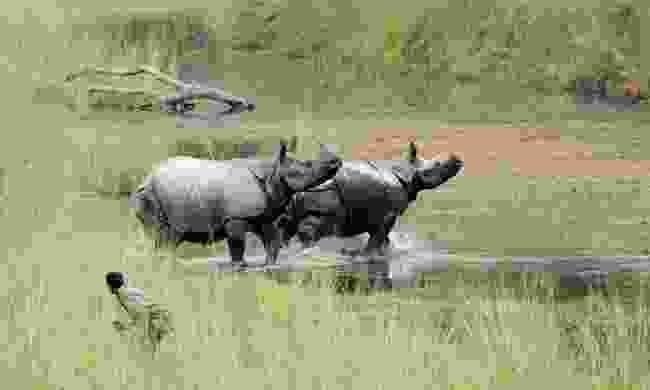 Nepal is the other stronghold for the one-horned rhino. The country has been a rare conservation success story in the past few years, and an estimated 600 one-horned rhinos remain in Nepal. Most can be found in Royal Chitwan National Park, in the country’s southern Terai lowlands.

You can explore the park by foot, jeep, or elephant safari. As well as the rhino, the park is also renowned for its protection of royal bengal tigers, gharial crocodiles and is home to over 60 mammals, 500 plus species of birds and more than 120 variations of fish.

There are several renowned lodges deep inside the park; the village of Sauraha, just outside the park on the Rapti River, has a range of accommodation to suit all budgets. The village is also actually one of the best areas for rhino-spotting – the animals have been known to cross the river at night to raid crops. The Sumatran rhino is sadly the most in peril, with fewer than 80 left in Asia today. There's been an astonishing population decline of 70% in the last few years. They are the most endangered large animal on Earth.

Recently, the Sumatran rhino became extinct in Malaysia. In November 2019, it was sadly reported that Malaysia's last Sumatran rhino - a male - passed away of natural causes.

Today, the most likely place you’ll spot a Sumatran rhino is at Way Kambas National Park in southern Sumatra, Indonesia. Its plans for breeding offers hope to the species, leading to the planned doubling of the sanctuary’s size. A new breeding facility opened in 2019. There are also small populations of the Sumatran rhino in Borneo.

Javan rhinos are also critically endangered and are also secretive and live in dense tropical forest, so they are very hard to see.The Javan rhino is the rarest of all. They used to be found in Vietnam as well as Indonesia, but what was believed to be Vietnam’s last remaining individual was killed in October 2011. A tiny population of less than 70 lives in Ujung Kulon National Park in Java. 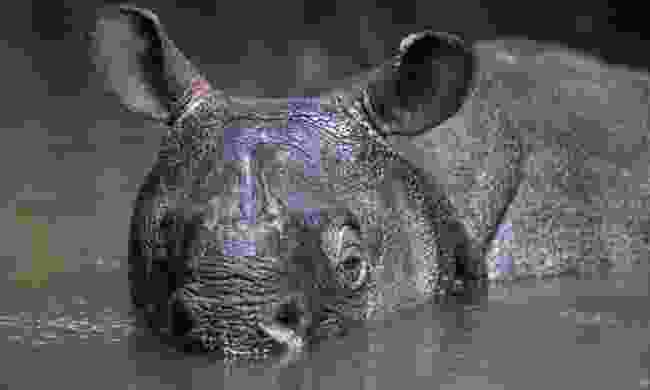 The chances of spotting one is low, but Wanderlust reader John Ironmonger was very lucky...

“We knew it was something big. Very big. Something was thrashing and splashing behind the curtain of palm fronds that shielded the river we floated down in Ujung Kulon National Park.

“We sat frozen in silence. The whole undergrowth seemed to be waving. ‘Rhino,’ whispered the ranger, and there it was – the huge brown backside of a Javan rhino just a metre or so away on the bank. Something else was crashing towards us.

“I saw the fleeting shape of a smaller rhino and my wife Sue caught a clear sight of them both – a mother rhino and her calf framed in the palm fronds. And then they were gone.

"We have no photograph to prove it, only our own memories and the account of a Javan park ranger called Dedi Hidayat who told it all to the park staff when we finally got back.

"We had been relying on luck and luck is what we definitely had!”

This piece originally ran in an older edition of Wanderlust magazine. While the numbers quoted in this piece were accurate at the time of publication, such is the plight of the rhino that they change rapidly.

For the most up-to-date and accurate figures on rhino populations, visit rhino.org

The world's most endangered animals - and how to help them

Where to see elephants in the wild

The best places to spot tigers in the wild