A magical landscape of bird-filled broads, long empty beaches and windmills from days of old, Norfolk is the perfect place to stretch your legs, breathe in the brisk sea air and soak up the solitude...

Norfolk’s coast is rich in wildlife, from the pine-fringed dunes and mature deciduous estate woodlands, to the long stretches of white sands and salt marshes.

Come out of season to enjoy the seal colonies and blow away the winter blues. Head inland to walk the Broads National Park, the sails of waterside windpumps filling the Norfolk skies.

Here are 7 of the best walks in Norfolk…

1. Along marsh and creek to Holkham Hall From Burnham Overy Staithe 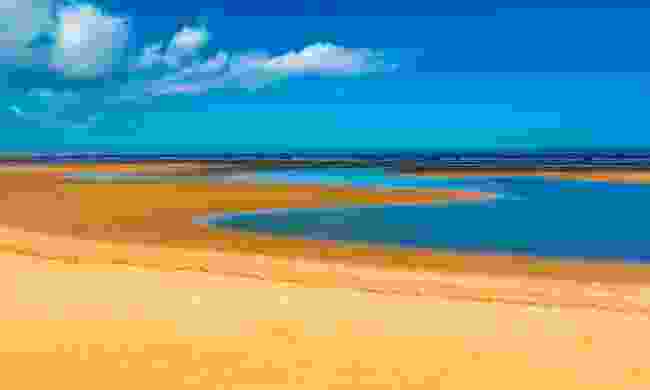 So beautiful is this stretch of coast, it was chosen as a setting for Shakespeare in Love. This is an atmospheric ramble through the wetlands, dunes and sands of Holkham National Nature Reserve to an 18th century country house.

From Burnham’s coastal settlement of red-roofed and white-washed cottages, marooned in a watery landscape of salt marshes and water channels, stride out east past Overy Marsh and Creek to the boardwalk.

The walk winds through high dunes to Holkham beach. Birdwatchers will rejoice - it's a haven for waders, flycatchers, crossbills and warblers.

Continue to Holkham Gap and head up Lady Anne’s Drive. The elegant Victoria Inn at the top of the lane is good for a mid-way break. Cross the road and continue up the adjacent lane to Holkham Hall surrounded by landscaped parkland.

Take time to explore the grounds before catching the Coasthopper bus back to Burnham Overy Staithe. Treat yourself to a champion’s pint or pub meal at The Hero to celebrate your successful five-mile coastal tramp.

2. Pine-fringed sands and big skies from Holkham to Wells-next-the-Sea 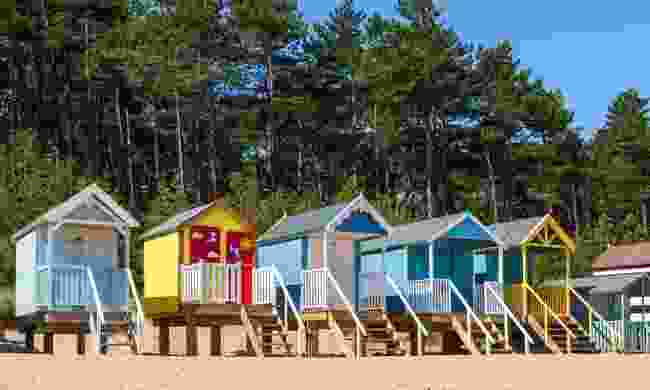 Blow the cobwebs away and walk from Holkham Gap along the beach to the historic port of Wells-next-the-Sea. This is a superb five-mile circular coastal walk that combines the wide sweep of Holkham sands, fringed by dunes and Corsican pines, with a charming coastal port.

From the car park at Holkham Gap, follow the beach east, big skies reflected in the shallows as you cross the strand - and if lucky, you may stumble on a starfish or a sunflower sea star.

You know you’re getting close to Wells when you reach the long rows of colourful beach huts. Pause at the beach cafe, or head straight into town for a pub lunch, following the footpath between Beach Road and the estuary with its salt marshes.

Once you’ve explored the wharves and seaside stores, retrace your steps along Beach Road, this time joining the path along the bottom of the car park and boating lake to follow the Peddars Way and North Coast Path alongside the pine-covered dunes to your starting point.

3. Across the shingle spit to Blakeney Point and the Lifeboat House 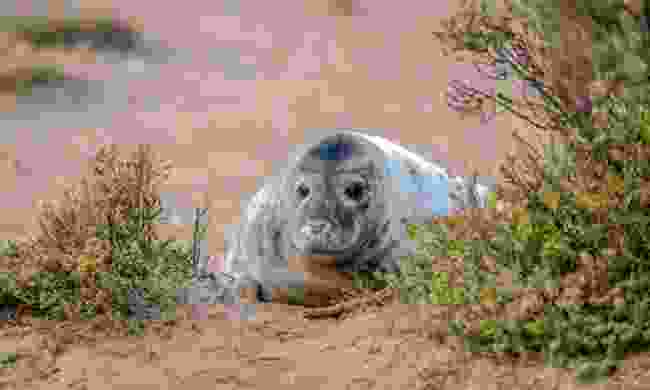 A grey seal hiding in the bushes at Blakeney Point (Shutterstock)

Bleak yet magnificent, the three-and-a-half mile stretch along the shingle ridge of Blakeney spit from Cley takes the rambler to Blakeney Point Lifeboat House, sea and sky filling the canvas of your walk.

This seven-mile, there-and-back walk is packed with interest. Rare plants - horned sea poppy, sea pea and sea blight - thrive, while common and grey seals shore up on the beach.

Starting from Cley Beach Car Park, follow the ridge out to the point (when the tide is out, it’s easier to walk along the beach). Veer away from the shore to follow the path beside the dunes to the distinctive blue boathouse (its information centre is open during summer).

From here, a boardwalk leads to the beach on the point. Look out for seals (from October to January) in among the dunes and enjoy a picnic before you wade back across the soft shingle to your starting point. 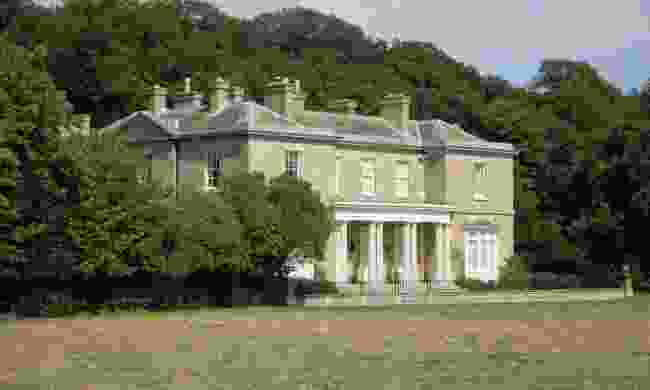 Between Wells-next-the-Sea and Cromer, you’ll find the estate of Sheringham Hall. Wander parkland lanes and pathways through mature woodland and landscaped gardens.

Take in breathtaking views of the stately home and coast from the strategically placed Bower and Ling houses, gazebo and temple. The walk is best appreciated in late spring when the rhododendrons and azaleas are ablaze with colour.

Starting from the visitor centre, head down the main path then detour left to the Bower. Back on the main path, continue along the main drive. Just before reaching Sheringham Hall take the path to the left, go through the gate, then head right up to the gazebo to enjoy the sea views.

Retrace your steps and continue straight along the path this time. Pass Farm Hall and take a pathway on the right leading to the temple. Following the arrows, cross the field to a gate and continue on up the track through Summer House Valley.  Go left to return to the visitor centre.

5. Along coast and marshland to Horsey Windpump 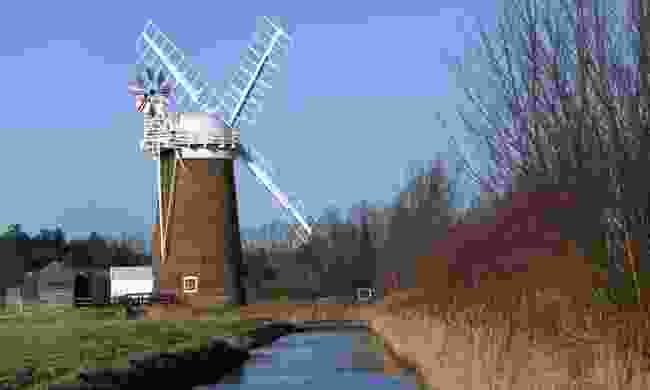 Horsey Windpump on the Horsey Marshes in Norfolk (Shutterstock)

This superb five-mile walk follows the coast before heading inland to the village of Horsey and two windpumps. Do the walk in winter, if you can, when the beach belongs to the seals.

Park at the Horsey Gap Car Park and take the well-defined path south-east that meanders between wetlands and the dyke. Look out for solitary grey herons and drop through the gap in the dyke to the beach to view the seals scattered the sands, between October and January.

Head back over the dyke, crossing over the Norfolk Coast Path this time, following the fingerpost signed for Nelson Head pub. Follow the path through the marshes inland, where the track emerges at The Street.

Continue towards Horsey and enjoy a break at Nelson Head before backtracking a short way, this time taking a right before the junction. At the end of the lane, turn right again to cross meadows to Horsey Windpump.

Fully restored, it’s worth climbing the windmill’s sixty-one steps for great views of the coast. Cross the main road and follow the path around Horsey Mere, then alongside Waxham New Cut to the dilapidated Brograve Mill.

Head east from here along the ditch to Horsey Corner. At the end of the lane, turn right to join the main road, veering left at the bend to return to your starting point at Horsey Gap.

6. Hardley Windpump on the Wherryman’s Way 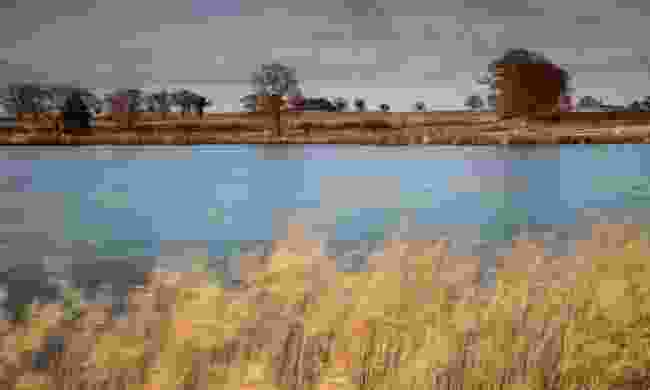 This is an idyllic walk of seven miles, following country lanes, dykes and the Wherryman’s Way on the River Yare. It passes the remains of a medieval monastery and a beautifully restored windpump. Do the walk on a summer weekend when the windpump and information centre, with light refreshments, is open.

From the end of Hardley Staithe Road at Hardley Dike, cross a signed field path to Hardley Street and follow it to the junction. Turn right and right again onto Hardley Road, leading to Langley Street, then follow Gentleman’s Walk.

Where the track turns a bend, go left onto a bridleway that joins with Staithe Road. At the staggered junction turn left, then right at Almshouses and head north along Stone Lane and track to Langley Green Road.

Turn right, taking time to view Langley Abbey with its ruins and medieval buildings. Veer left into Langley Street and take the signposted track left along Langley Dike to the River Yare.

Head east along the river bank, following the great white sails of Hardley Windpump. If the sails are turning, the mill is open. Continue along the Yare, then follow Hardley Dyke, lined with boats, back to your starting point. 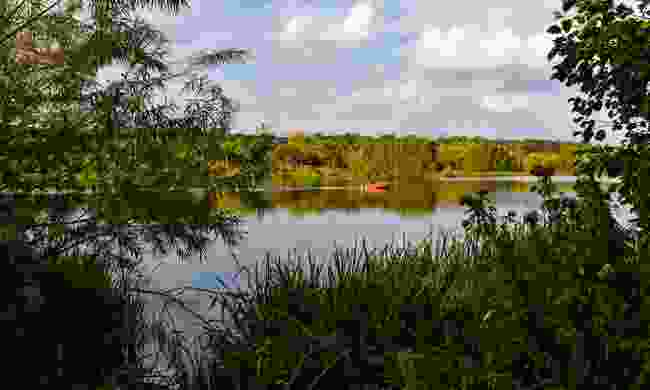 Just east of Norwich, this easy accessible two-mile ramble circles Whitlingham Great Broad. Before leaving the car park, drop into the visitor centre and learn more about the wildlife that inhabits the Broads here.

Pass the ruins of a stately hall, west of the car park, and follow the path cutting between Great and Little Broad. On the north shore, the path crosses a sliver of land that lies between Great Broad and Long Cut on the River Yare.

Stop at the bird screen and watch the waterbirds on Great Broad. Continue through woodland back to the south shore and the car park, where you can refuel at the cafe in the visitor centre.