7 of the best exhilarating walks in Dorset

From fossil hunting and oversized fibreglass bread loaves, to stone globes, ghost towns and rude chalk giants carved into the hillside, Dorset walks aren't all about the world-famous coastal path... 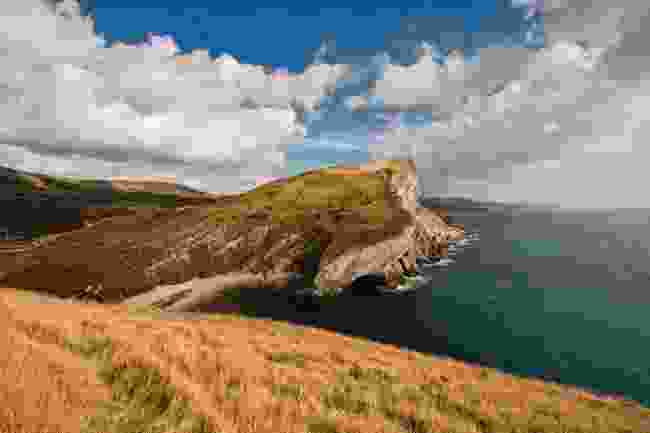 The ghost village of Tyneham, known as Dorset’s ‘lost’ village, is an intriguing start/finish point for this nearly four mile walk. Evacuated in 1943 during WWII and deserted ever since (it was needed for military training after the war ended), it is worth delaying the start of your walk to explore some of the original buildings to imagine what it would have been like to live there.

After a short climb out of the village, you will find yourself on a prehistoric ridgeway. The Iron Age Flower’s Barrow hillfort is a brilliant spot for looking out over the rugged coastline and the vast nearby heathland. Preserved as military land, almost no agricultural development has taken place on the heath, and as a result it is teeming with gorgeous wildflowers.

Walk a little further and you will find yourself in dog-friendly Worbarrow Bay. P.S. Tyneham and Worbarrow are part of the Ministry of Defence Lulworth Ranges, so it is important to check access on the day you plan to walk, plus keep to the paths marked with yellow posts at all times.

2. The Isle of Purbeck: Studland Bay to Great Globe 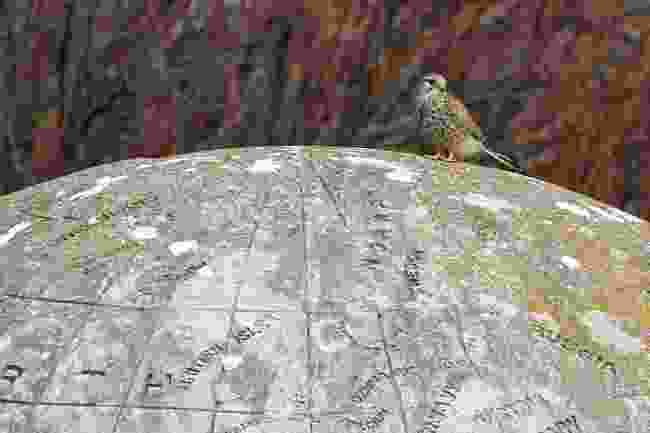 If you’re looking for a moderately strenuous day of walking (about 13 to 15 miles) that combines intriguing rock formations, a characterful coastal town, a few decent pubs and an enormous stone globe, then look no further than the Isle of Purbeck.

Starting at the car park by the quirky Bankes Arms pub, head straight for the cliffs (signposted downhill from the pub) and start the climb towards one of the famous landmarks of the Jurassic Coast, Old Harry. Old Harry is not a man on a bench, but a chalk stack (the furthest from the mainland). Interestingly, his wife (another stack) sadly tumbled into the sea back in 1896.

Leaving Harry behind, the next stretch of coast path is bracing but beautiful, before you descend towards the sandy beach at seaside town Swanage. The descent is always a surprise, as the path has been known to fall into the sea, so is being constantly relocated. If you can tear yourself away from the craft shops or local pubs, it’s certainly worth heading out beyond the Pier and up the hill towards Durlston Country Park and National Nature Reserve.

Hug the cliffs long enough (and follow a short forest walk) to reach the impressive Great Globe. Be sure to check out the quotes engraved in stone behind the globe, covering everything from Shakespeare to facts about the natural world.

Then, unless you feel like extending the walk to the Dancing Ledge, it’s time to retrace your steps and find your way back to the Bankes Arms for a well-deserved drink and pie.

3. Corfe Castle to Swanage along the Purbeck Ridgeway 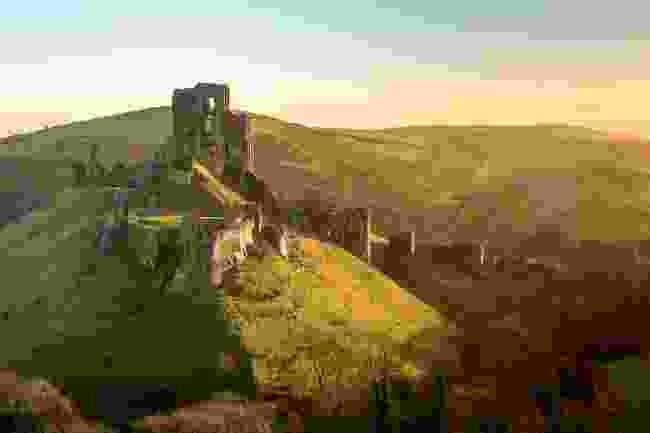 If you do find yourself on the Isle of Purbeck, be sure to linger for longer than a day to tackle another of its memorable walks.

With views of Poole Harbour (said to be Europe’s largest natural harbour) along with green and chalky coastal landscapes from the vantage point on Nine Barrow and Ballard Down, the Purbeck Ridgeway is well worth the climb.

Skip the stroll back to Corfe Castle along the ridgeway in favour of a trip on the Swanage railway (although do check the timetable being planning your day).

4. A loop round the Isle of Portland 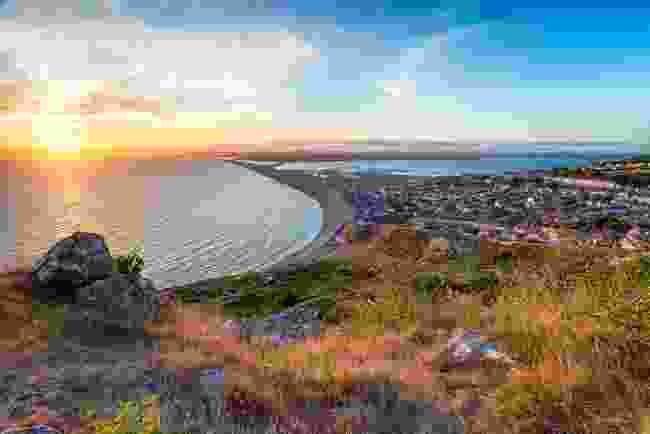 Weymouth view from the Isle of Portland (Shutterstock)

Joined to the mainland near Weymouth by the shingle of Chesil Beach, Portland is the southernmost point of the Jurassic Coast and its coastal path can easily deliver a full day of walking (between 10 to 14 miles depending on whether you tackle Chesil).

If arriving by car, drive up through Fortuneswell to the car park at the top of the hill on the way to the island’s prison The Verne. Don't be deterred! By walking towards the prison, you will soon hit the coast. What you can see of the prison is architecturally interesting, too.

Walking clockwise round the island, the first stretch of coast will see you walking beside sheer cliff edges (a mecca for rock climbers and abseilers). The gravel path winds its way towards the red- and white-striped Portland Bill Lighthouse, which is surrounded by rows of colourful cliffside beach huts (that are sold for eye-watering prices).

From here, the path opens up and snakes along the grass-topped cliffs, passing Mutton Cove (named after the famous breed of Portland sheep and home to many shipwrecks) and Blacknor Fort. After a few wind-blown sections, you will be grateful of the descent into Chiswell, a tiny fishing village with a striking sea wall, allowing you to avoid the Chesil Beach shingle (which is hard going after the undulating coast path).

At this point, you can either walk back towards the mainland to extend the walk, or make your way through the marina and build up strength for the steep climb through Fortuneswell to the car park. There are a few routes, but there is an interesting old tram track, which will distract you from your aching legs. 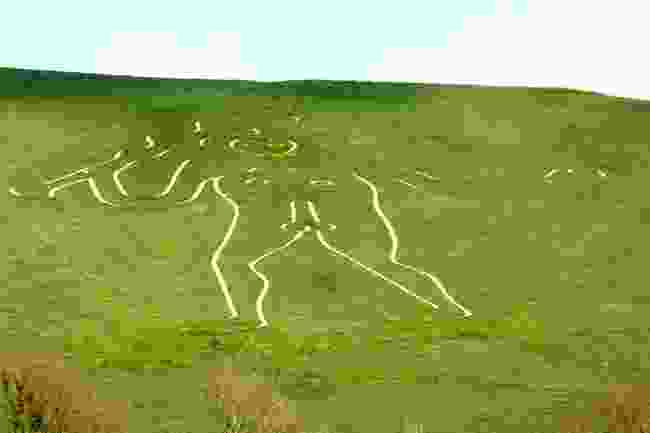 Spend too long pondering the origins of Britain’s largest chalk figure and you won’t do much walking. Whether a symbol of spirituality, linked to the Greco-Roman hero Hercules, a mockery of Oliver Cromwell or an aid to fertility, this 180ft giant chalk figure is indisputably impressive.

Start from the Cerne Abbas Viewpoint Car Park for a good view, but do look at the hill from different points if you can (including taking the short walk to its giant feet). In different lights and at different points, it can look bright white or like a faint outline. Interestingly, the chalk is refreshed every decade or so by an army of rangers and volunteers.

Having had your fill of hillside giant, head down to the local village, stopping at the ruined 10th century Cerne Abbey on the way. Then, you can either extend your walk by picking up the Wessex Ridgeway - to enjoy sights such as Minterne Gardens - or climb back for one last look at potentially the weirdest thing ever carved into a hill. 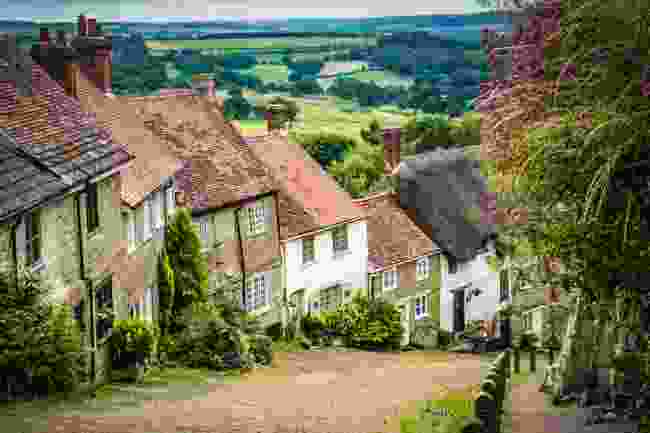 The shortest walk here (at less than a mile in length), people head to Gold Hill for two main reasons. One, for the view at the top of the hill and, two, to imagine just how hard it would have been to push a bike laden with bread up the hill in the famous 1973 Ridley Scott Hovis advert.

With an incline of 16.09º, Hovis Hill (as it is fondly known) is nothing short of punishing. The cobbles, cottages and a thatched roof or two certainly provide a distracting and charming backdrop for the climb.

Of course, if you have more time (and would rather go down the hill), there is an easy loop starting at the Tourist Information Centre on Bell Street. This extended walk will give you the chance to enjoy more bread-related sights (including the giant fibreglass Hovis loaf outside the Town Hall) and views stretching as far as Glastonbury Tor on a clear day (from Castle Hill).

With fields, kissing gates and whitewashed thatched cottages, the loop is a great way to take in all the features of Dorset’s only significant hilltop settlement. 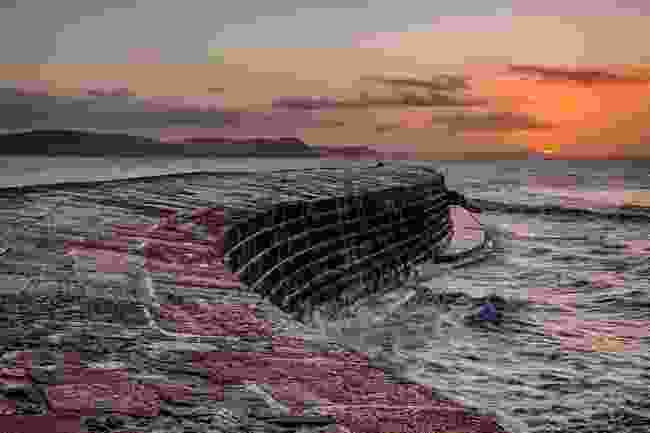 Get the tide right and walking from Lyme’s famous Cobb, along the promenade and out towards to the beach, takes you straight into fossil hunting territory.

This first stretch, after you’ve left Lyme behind, does involve an element of clambering as you navigate the slimy rocks. But rocks soon become pebbles as you head towards the small village of Charmouth.

The Charmouth seafront is small and beautifully formed, but it does little to hide the next energetic section. At 191m above sea level, Golden Cap is highest point on the Dorset coast and, as such, rewards all those who climb it with a pretty spectacular view. Be prepared: there are strenuous parts on the way up and steep downs.

However, with the promise of a tasty ploughman’s lunch on the cliff edge at The Anchor Inn in Seatown, you will be grateful for the chance to make room for those extra calories. As this is a linear route, do check public transport connections for a rather less strenuous passage back to Lyme Regis.

P.S. One of our top literary walks is based in Dorset. Check it out

The most glorious English castles and their histories