9 places that are perfect for social distancing during COVID-19

With social distancing rules in place, it’s got us thinking about where we wish we could go to keep our distance from the rest of the world. From vast deserts to remote islands, here's our top nine... 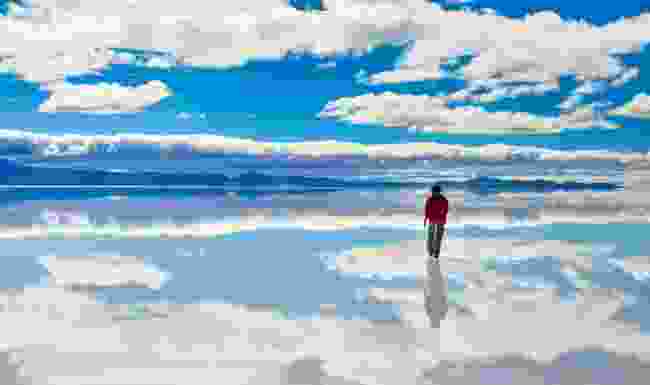 Reminiscent of a huge, frosted mirror that stretches as far as the eye can see, in every direction, Bolivia’s salt flats are one of the most desolate places in the world.

You certainly wouldn’t have any trouble abiding by the two-metre rule here, and if someone else did happen to be walking by, you’d probably see them coming a long way off, reflected in the salt pans.

At certain times of the year, the salt crust-carpeted, dried-up lake is flooded by a shallow layer of water to create a beautiful optical illusion. The water turns the 10,582 sq km plain into a mirror, reflecting everything around it.

From clouds floating in blue skies and mountains on the horizon, to every person on its surface, the largest salt flat in the world offers up a perfectly symmetrical reflection of everything in its wake. 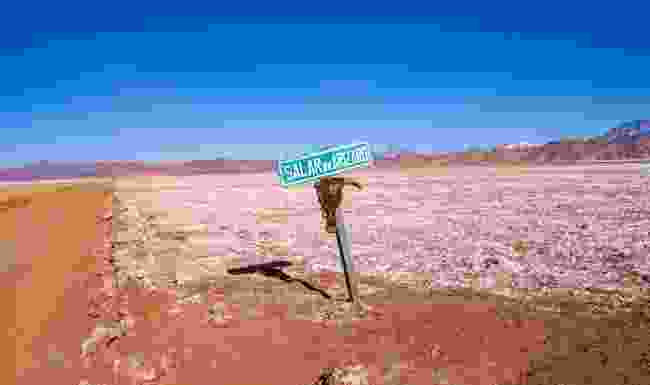 Argentina's salt flats are remote, and a great place to be during the coronavirus lockdown (Shutterstock)

Just over the border in Argentina, the High Puna de Atacama is the perfect place to avoid other people during the coronavirus lockdown. If only we could get there.

This land of high deserts, salt flats, turquoise lakes and incredible rock formations has a fraction of the visitors that Chile's better known Atacama desert receives. Truly off-the-beaten-track, it has yet to be discovered by many of the world’s travellers, so it's highly unlikely you'd be joined by other visitors.

The landscapes vary from sand dunes to twisted rocks to vast expanses of salt plain. But it's worth going for the Salar de Arizaro alone; one of the largest salt flats in the world, it is also home to one of earth's greatest natural wonders Cono de Arita.

Is Argentina's Puna de Atacama the most surreal place on Earth? 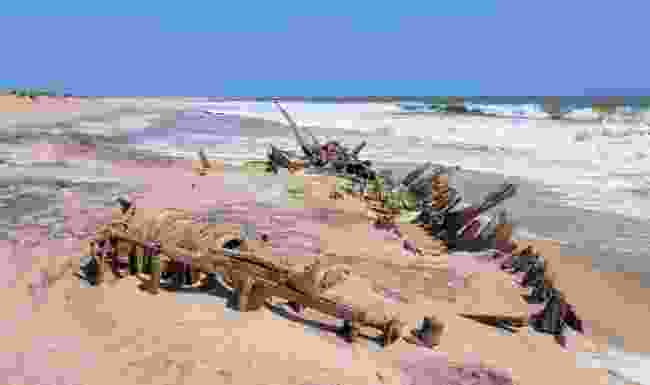 Skeleton Coast: an apt name for this ghostly stretch of sand on Namibia's northern coast, nestled between the Kunene River and the Ugab River.

Littered with whale bones, abandoned mines and the shipwrecks of those who dared and failed to cross the waters create a palpably dramatic atmosphere.

Add a touch of pathetic fallacy from the thick fogs that hang low over the sand, and the vicious wind that swirls them into the air, and the gloomy picture is complete. But this is what makes it such a brilliant – and adventurous  – place to self-isolate.

That said, the coastline isn’t quite as abandoned as it may appear. Despite the harshness of the environment, an array of wildlife have managed to make it their home. Among other creatures, you’re likely to spy black rhinos, lions, giraffes and the odd giant shadow of a desert elephant looming dark and mysterious on the horizon.

Of course, you'll need somewhere comfortable to stay, especially when you're social distancing. Shipwreck Lodge offers modern, artistic accommodation on the Skeleton Coast, with luxury embedded in every detail. This is how we'd self-isolate in style. 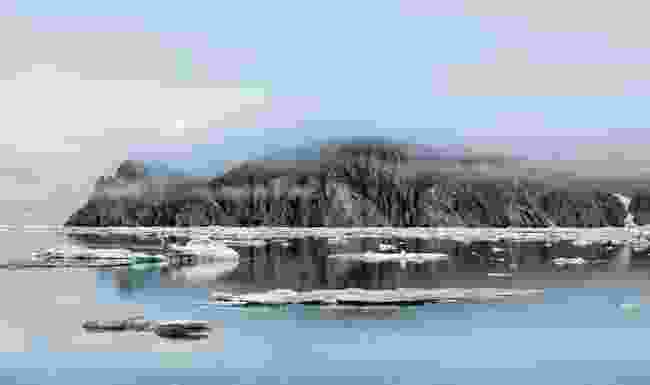 Wrangel Island, in the Chuckchi Sea, is devoid of people, so social distancing here would be a breeze (Shutterstock)

But if you were to manage stepping foot it, you'd certainly have no trouble social distancing. You’re more likely to meet a polar bear here than another person.

But be warned, the some 100,000 Pacific walruses that call this island home may try to get in your way...

See more of the world’s most remote islands here 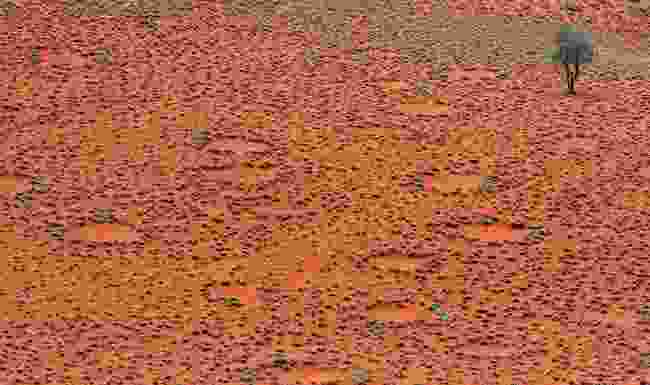 As one of the least populated countries in the world, it should come as no surprise that Namibia has more than one place perfect for social distancing.

The NamibRand is an orange-hued private nature reserve: over 2,000 sq km of rugged land, pockmarked with mountains and sand dunes. You could spend days roaming over the desert landscape, spying oryx and zebra, and feel like you’re the only human on Earth.

But the real reward comes when the sun goes down and the NamibRand is illuminated by a sky punctured by glittering stars, so bright you’ll think someone left the light on. One of the world's only gold-certified Dark Sky Reserves, not only will you have the land all to yourself, but the entire night sky, too. 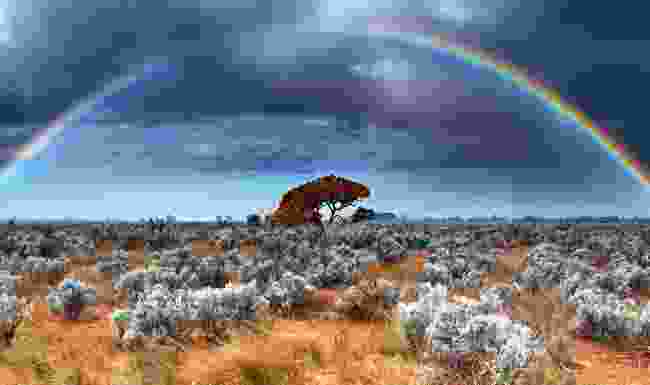 So vast is Australia’s iconic Outback that no one can actually agree on how big it is.

It's safe to assume, though, that the seemingly never-ending, sun-scorched landscape offers more than enough space to keep your social distance.

With more to do here than first meets the eye, you won’t find yourself sat twiddling your thumbs, either. Find stories in the Aboriginal skeleton art on the ochre rocks, seek out large wildlife such as crocodiles and kangaroos, view some of the most spectacular sunsets on Earth, and gaze up at star-studded night skies. 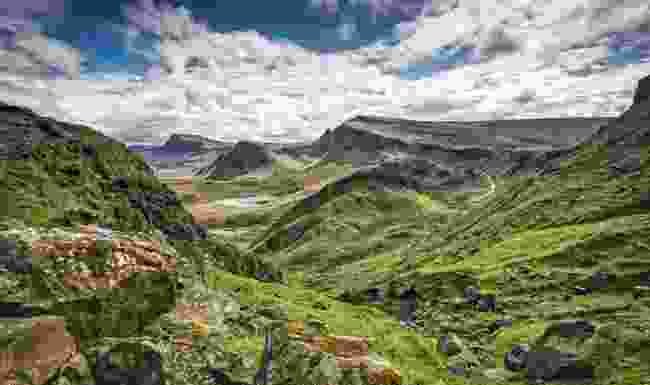 Rolling green hills, pristine lakes, trickling waterfalls and peak-studded mountain views. The Scottish Highlands is not only one of the most solitary places in the whole of the UK, but also one of the most beautiful.

Natural splendour is everywhere, from the birds flying in the sky to the Shetland ponies grazing in the grass. The only man-made addition to the unspoilt landscape are crumbling castles, their faded bricks almost blending into the nature surrounding them.

Being isolated here feels like a treat rather than a burden. It's not uncommon for phone signal to cut out, either, meaning the Scottish Highlands offer the chance to truly social distance, allowing you to fully switch off from the digital world, too.

The Wanderlust guide to the Scottish Highlands

8. The Gobi Desert, Mongolia and China 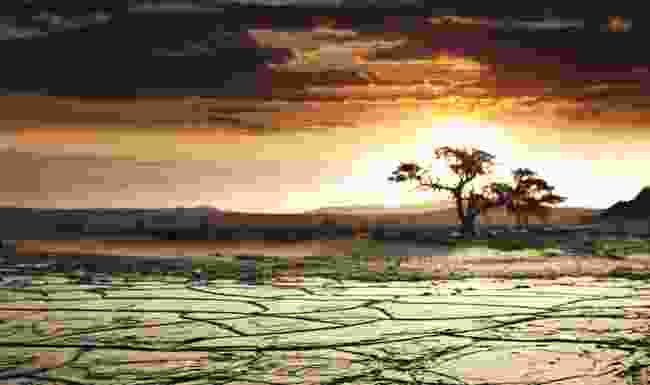 The Gobi Desert in Asia is vast and low on people, making it ideal for social distancing (Shutterstock)

However, it does have more than enough space, and enough diversity, for everyone. Adventure is easy to find by climbing the mountains, seeing huge herds of camels, and even spotting the very rare snow leopard – by no means a boring place to self-isolate. 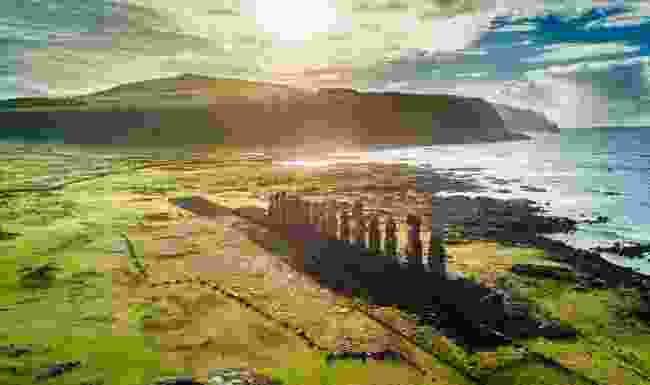 Easter Island in Chile is so remote, social distancing is barely a challenge (Shutterstock)

Far flung in the Pacific Ocean, to reach Easter Island you have to get a plane from mainland Chile and fly 3,686km.

With a subtropical climate, bright white beaches, and rainbow-hued fish you can see by snorkelling - this is a true hidden paradise.

And best of all, with just a handful of locals, you'll have the island largely to yourself. The only company will be in the form of the moai (carved stone heads) that form a jagged line, some leaning forward and some back, all looking out at the vast, empty ocean. The perfect place to social distance.

Explore these landscapes in more detail:

The Wanderlust guide to the Scottish Highlands

8 of the best things to do in Namibia