Swim with dolphins in the Amazon, cycle the world's most dangerous road, and explore ancient Inca ruins – these must-do activities reveal the highlights of Bolivia and beyond... 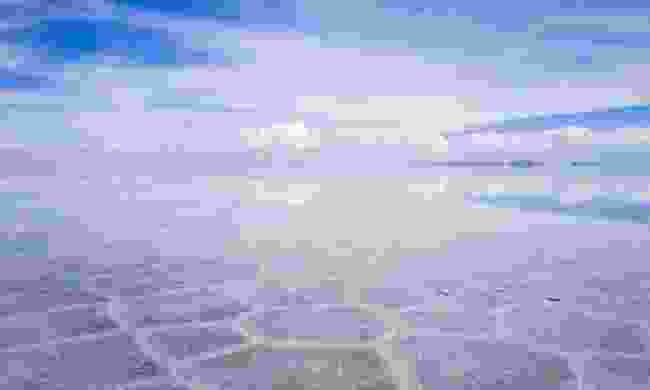 A trip to Bolivia isn’t complete without a visit to the world’s largest salt flat. A dazzlingly white expanse of mirror-like surfaces, rock formations and cacti-studded islands, Salar de Uyuni is a land of big skies and endless horizons.

A visit in the dry season (late April to October) reveals its unique blanket of hexagon-shaped salt deposits, which form as a natural result of evaporation in the post-summer period. While heavy rainfall in the wet season (November to April) replenishes the surface to form a vast reflective mirror.

The 10 billion tonnes of salt that form this distinctive dry plain is a stark contrast to the giant lake that once dominated the landscape in the Mesolithic period. But take note: this isn’t the kind of salt you’ll want to add to your fish and chips. 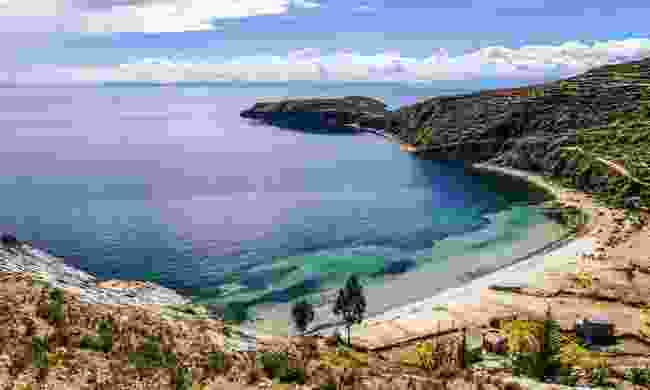 Straddling the border between Bolivia and Peru, Lake Titicaca is rich in ancient Inca settlements and underwater ruins – and it's home to over 530 aquatic species, including the rare giant frog. The local delicacy is freshly-caught smoked trout, washed down with ripe papaya juice.

Boats regularly ply the waters to Isla Del Sol, where you can immerse yourself in quiet island life and watch the sun rise in the same spot where – according to local lore – it first rose thousands of years ago. Navigating this idyllic island couldn’t be easier, with signposted trails that lead you to sacred ruins in its remotest corners.

3. Cycle the world’s most dangerous road 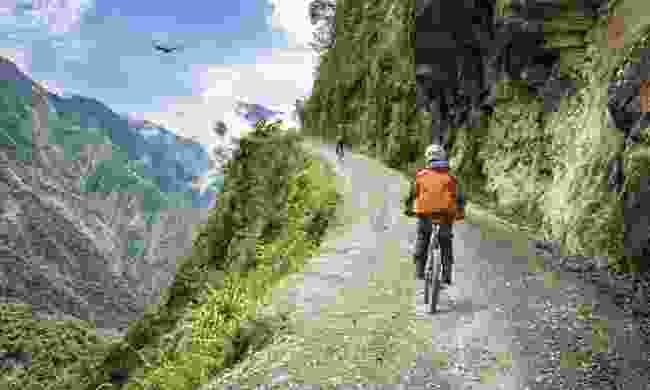 Cycle from the dizzying heights of the Bolivian Altiplano to the lowland rainforests of Coroico, following the tracks of Yungas Road. This narrow path winds its way along jaw-dropping 300ft-high cliff edges, and pedalling it is a must-do activity for thrill seekers.

The route starts at La Cumbre Pass (4,650m) and meanders to sub-tropical climates, where local coca farmers can be spotted drying leaves en route. Wooden crosses buried in the hedgerows indicate where vehicles have fallen off the edge – a chilling reminder of how it got to be nicknamed the ‘world’s most dangerous road’.

But fear not, as additional safety measures in the form of barriers, cycling guides and safety equipment have been embraced in recent years. To further increase your chances of survival, we'd recommend ditching your selfie-stick too. 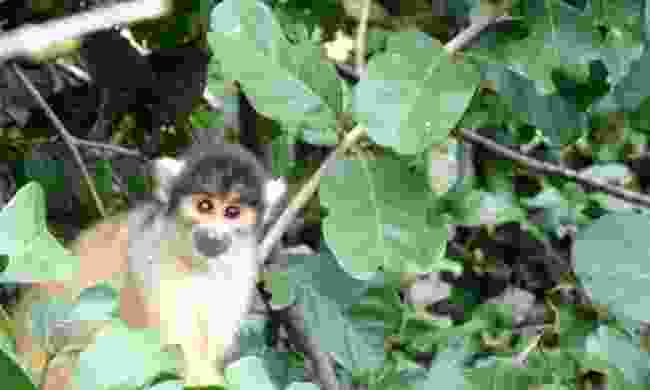 From sloths to squirrel monkeys, the variety of wildlife found in Bolivia’s northern region makes it one of the most diverse eco-systems in the world.

The Amazon basin stretches into Bolivia's northern region and can be easily accessed by public transport from major cities to its main town Rurrenabaque. Hop on board one of the boats that await to whisk travellers away to stilt-houses on the river, before venturing upstream for piranha fishing, anaconda hunting and swimming with pink river dolphins.

5. Shop for souvenirs at the Witches' Market 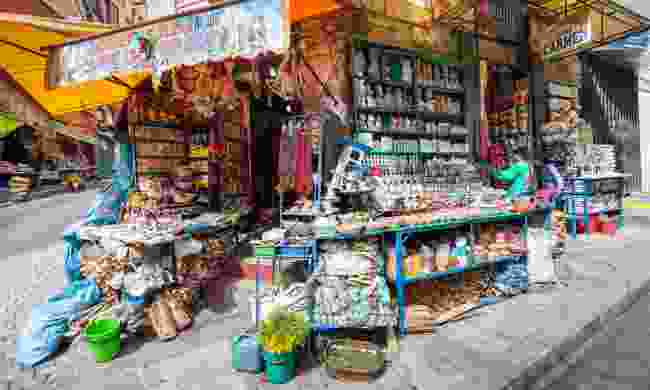 A stall at the Witches' Market (Dreamstime)

Hidden in the backstreets of La Paz, the Witches' Market is the place to find all things weird and wonderful, with everything from dead llama foetuses and dried frogs to good fortune potions and llama-wool jumpers.

Wander the alleyways for encounters with cholitas and witches, who sell a selection of intriguing charms and unconventional souvenirs – although we can’t guarantee you’ll get them all through airport security.

Brushing up on the local lingo will stand you in good stead for haggling, and will better your chances of not being approached as a foolish gringo. Ask “cuánto cuesta” for "how much" and “muchas gracias” for a polite "thank you". 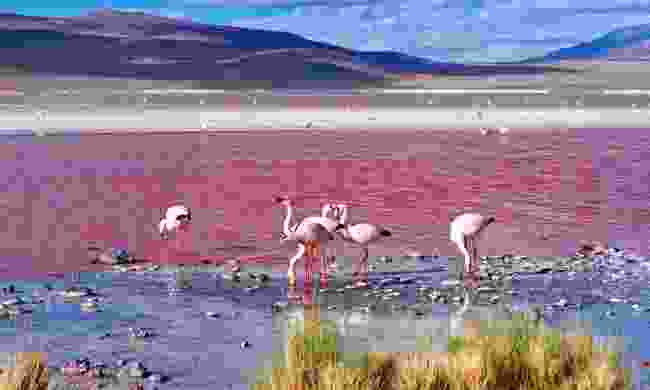 The blood-red waters of Laguna Colorada is where you'll find the world’s largest population of rare James's flamingos, as well as both Andean and Chilean varieties, which can be best spotted between December and April.

The flamingos' blossom-pink feathers come as a natural result of feeding on the algae that thrives in the mineral-rich waters, which also naturally gives the lake its unique shade.

Deposits of the lake's salt waters form white islands across the laguna and have been photographed weaving in a marble pattern from the NASA International Space Station – it's quite a sight!

7. Mountain trek in the Andes 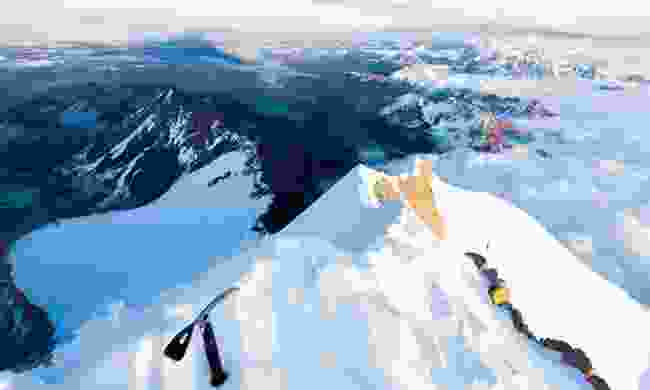 The Andean mountain range holds some of the world's most majestic peaks, including Mount Aconcagua – marking the highest point in the Southern Hemisphere and renowned as one of the Seven Summits. But you needn't be super-fit to tackle some of the peaks that soar over 5,000 metres high. Whether you’re a beginner or novice hiker, there’s a mountain with your name on it.

One of the most popular ascents is Huayna Potosí, due to its ease of access and sexy 6,000-metre height, which earns bragging rights for outdoor adventurers. The distinct outline of Illimani is equally tempting to climb, and can be spotted in the distance from La Paz.

8. Walk in the footsteps of Che Guevara Che Guevara carved his way through history as a revolutionist, socialist and activist, yet few know him as the ambitious traveller that he was. The chance to follow in his footsteps lies within one of Bolivia’s most off-beat regions, marking an iconic point on the Che Guevara Trail.

With fewer than 20 houses, the dusty village of La Higuera is the last place you’d expect to have once hosted a leader of a revolution. But it was in this unsuspecting hamlet that Che Guevara’s life came to an end, after he was executed in the local school.

More than 50 years after his death, people from all over the world continue to navigate their way to the area to pay their respects.

The best things to do in Ecuador

What can you do in Peru, beyond Machu Picchu?

Why you should visit Colombia