Dream sleep: Would you stay the night at Shipwreck Lodge?

Namibia's Shipwreck Lodge may be set in an area once dubbed 'The Gates of Hell', but that's all part of the appeal at the hotel breathing new life into the Skeleton Coast…

Even by Namibia’s arid standards, the Skeleton Coast isn’t what you’d call hospitable. Over the years, Namibian bushmen and Portuguese sailors have approached this stretch of Namibia’s north-western coast with a mixture of awe and dread: the bushmen called it ‘The Land God Made in Anger’, while Portuguese sailors dubbed it ‘The Gates of Hell’.

With the infamous Benguela current bringing in fierce swells and dense sea fogs, this area close to the Angolan border is known for the scores of ships that have run aground here over the years, and whose wrecks still remain. Abandoned diamond mines, bomber planes and rusting steam trains, not to mention the whale bones poking out of the sand, only add to the post-apocalyptic vibe. 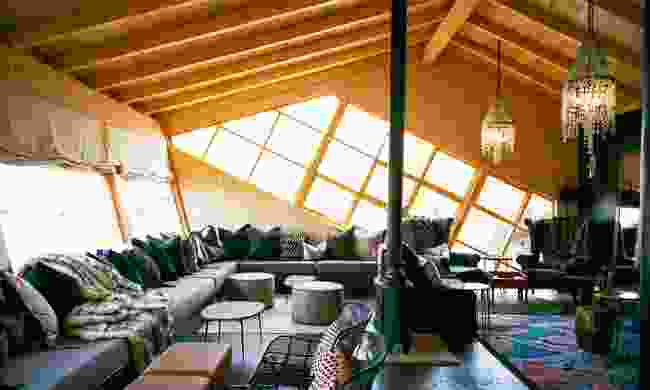 But, as of June this year, the Skeleton Coast has a new adventure lodge that somehow fits in with the dramatic tone of the area. Shipwreck Lodge’s eight solar-powered wooden cabins, set in the dunes overlooking the crashing Atlantic, have asymmetrical shapes inspired by the coast’s shipwrecked remains, and its muted colours mean it blends in seamlessly. The central restaurant and lounge even has a viewing deck, from which visitors can gaze out over the sand dunes, and there are plans to add a pool.

As inhospitable as the coast might seem, it is home to an unlikely array of wildlife: from the vast seal colony at Möwe Bay to giraffes, black rhinos and lions, as well as desert elephants only to be found in Namibia and Mali. Naturally, the lodge offers trips to see all this and more, with visits to shipwrecks, the old Westies diamond mine and the Clay Castles where wild predators roam the formations. It all makes for a fascinating way to soak up an area too often skimmed over.

British Airways fly from London Heathrow to Windhoek via Johannesburg. Charter flight companies such as Scenic Air fly from Windhoek to the airstrip at Möwe Bay, where transfers to the lodge can be arranged. Self-drive travellers are also able to transfer from a site at Möwe Bay.

Steppes Travel run 14-day self-drive Namibia tours and can be tailored to include a stay at Shipwreck Lodge.