9 amazing destinations where you can swim with wildlife

From sea turtles in Malaysia to dolphins in Madeira, there's a whole world of marine life you can swim with. So, strap on a snorkel or a scuba tank and dive into our top watery encounters… 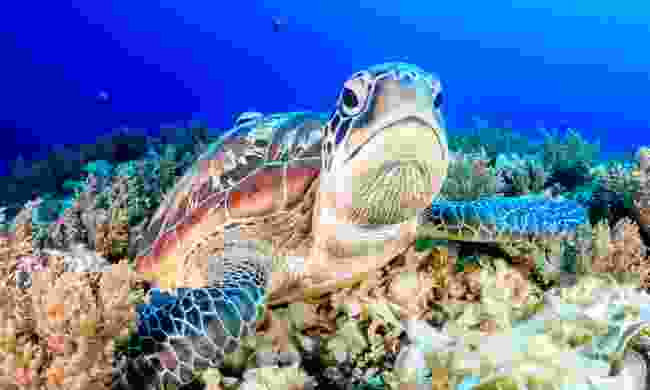 With strong currents rushing in from the Celebes Sea, Malaysian Borneo’s Sipadan Island is the ideal place to glimpse some of the richest marine life in the world.

Scores of scuba divers agree, frequently taking to the coastal waters to swim alongside bales of green and hawksbill turtles. Daily diving trips leave from South Point, where you can often drift alongside 20 sea turtles on a single dive.

See them: Huge numbers of green turtles cluster in the water during August, at the start of nesting season (July to October), when experienced divers and snorkellers can watch their behaviour firsthand.

Turtle mating is not for the faint-hearted, though – groups of males cause chaos, biting necks and flapping their fins wildly as they chase a mate. 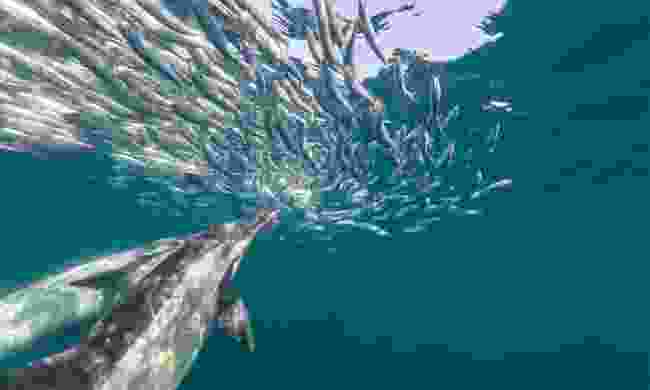 The world-famous ‘sardine run’ between South Africa’s Eastern Cape and the waters off KwaZulu-Natal draws countless visitors every summer.

Silvery shoals of sardines migrate in their millions, hurtling north to warmer sub-tropical waters and straight into the waiting jaws of voracious sharks, seals and seabirds.

See them: The sardine run occurs between May and July each year, when underwater escapades can be arranged for experienced divers and snorkellers keen to observe the theatre of nature.

It’s a chaotic sight as the sardines swarm, helpless against the tide of bronze whaler sharks and dolphins that patrol the waters, fencing them into tight balls, ready to be devoured. 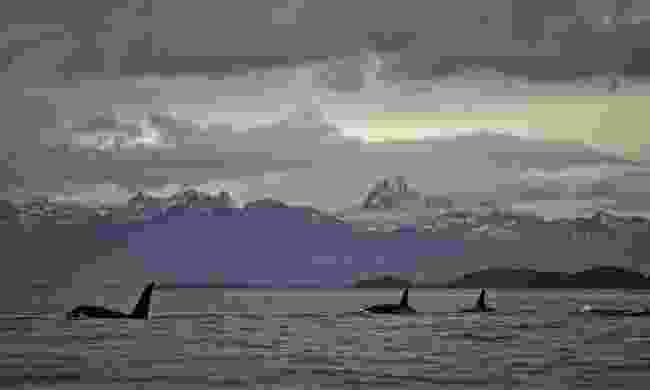 A pod of Norway's orcas in Tysfjord (Shutterstock)

Nothing beats the moment you spot a black dorsal fin popping out of Norway’s Arctic waters. However, the millions of herring that had typically sought winter refuge around Tysfjord are now increasingly found just north of the fjord, and those famous fins seem to be following; the fish are an irresistible invitation for the pods of orca, who hunt the closely packed fish en masse.

See them: Head to Tysfjord between October and January (the best month is November) for encounters. Tysfjord Turistsenter runs ten-hour trips off the north Norwegian coast, where confident snorkellers can have dramatic encounters with the largest dolphins on Earth. 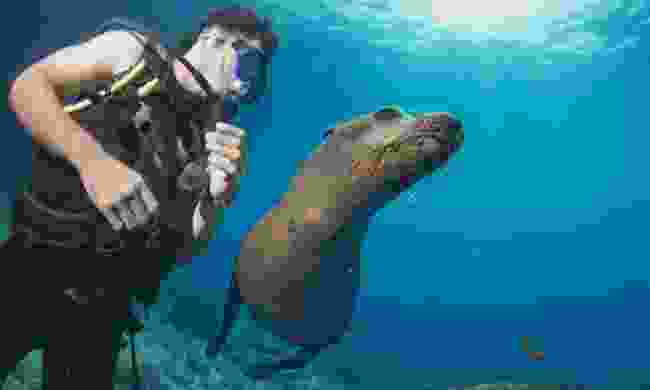 Swim with sea lions in the Galápagos Islands (Shutterstock)

Friendly sea lions playfully zip through the waters around San Cristóbal and Champion Islet, off Floreana, where encounters are common. Glimpses of marine iguanas, whitetip reef sharks and the only penguins found north of the equator can also be spotted in and around these waters.

See them: The Galápagos Islands are a year-round destination and, with very little current, the waters off Floreana are excellent for snorkellers and divers of all abilities looking for sea lion encounters.

You can spot them here any time of year; that said, it’s easier during breeding season (July to December), while you’re most likely to see adorable pups in August. 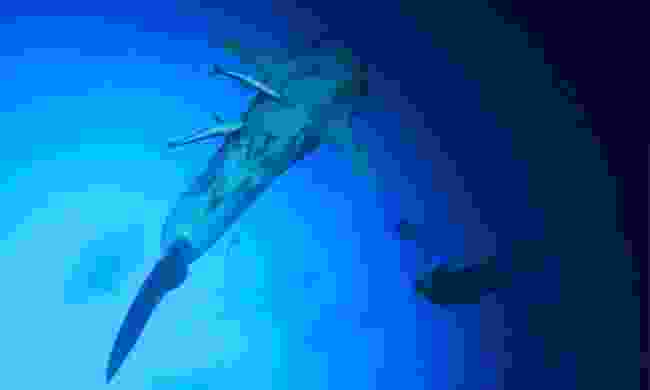 Unsurprisingly, whale sharks feature at the top of many divers’ bucket lists. Don’t let their enormous mouths fool you, these fish (the largest fish in the world, no less) are gentle giants and are strictly protected against too much human interaction.

See them: Whale sharks appear on the Western Australian coast near Exmouth between March and August each year.

Local tour operators will also typically take experienced and non-certified divers around the Muiron Islands, a short boat ride away and home to soft corals and nesting turtles. Snorkellers are also welcomed on these trips, though encounters may be more fleeting. 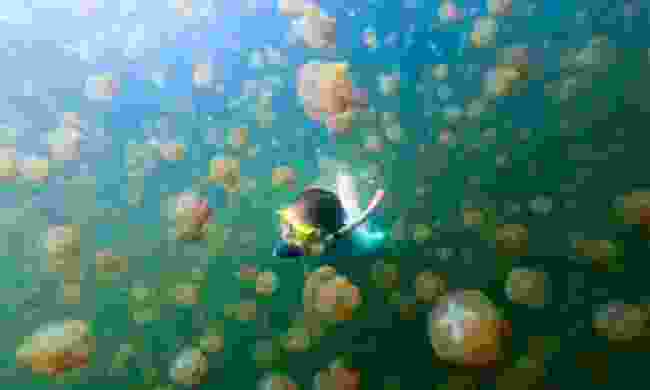 Snorkel among the golden jellyfish in Palau (Shutterstock)

At around 12,000 years old, this marine lagoon off Eil Malk Island in Micronesia has become the unlikely setting for large gatherings of golden jellyfish.

Many believe that this creature has no sting; it actually does, but it’s so mild as to be unnoticeable, meaning swimmers gather to paddle among thousands of these jellyfish utterly untroubled.

See them: You can see these jellies year round, but only snorkellers with certified guides are allowed in the  water (diving is not permitted).

The lake closed in 2016 after droughts devastated the 30-million strong jellyfish horde, but it reopened this year, and now its residents are said to number more than half a million. 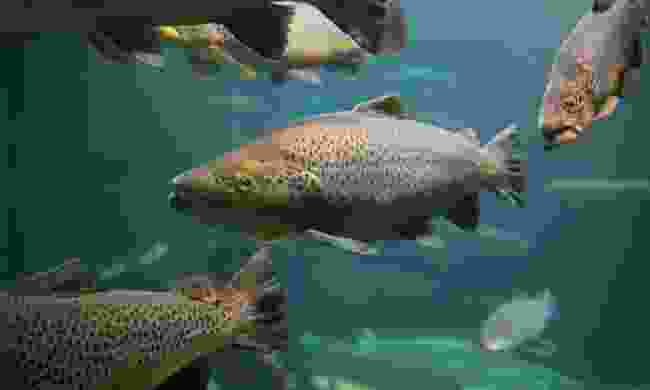 Swim with salmon in New Brunswick in September (Shutterstock)

The salmon run off British Columbia’s coast is rightly famous, but it has a rival. On the other side of the country lies New Brunswick and the Inner Bay of Fundy.

Here, researchers at Fundy National Park are working to protect its endangered Atlantic salmon, and offer guests the chance to help, training snorkellers to swim alongside the fish and count their numbers in the name of science.

See them: In September, you can don a dry suit, mask and snorkel and drift along Fundy NP’s rivers with rangers on in-depth expeditions to count the number of salmon threading through the river. 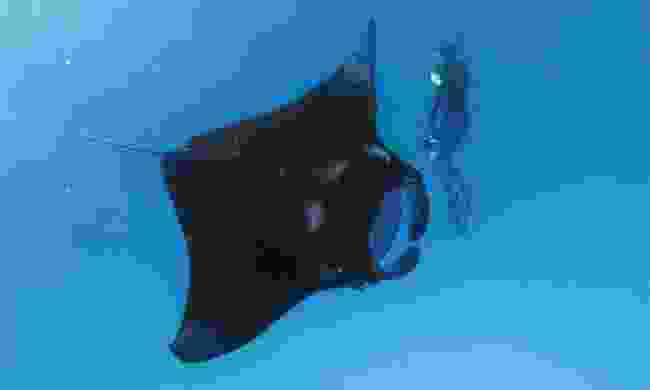 Dive to be dwarfed by manta ray (Phoebe Smith)

The Maldives’ network of coral atolls are something of a magnet for manta rays. The deep-water channels are your best bet for spotting these creatures as they drift through and feed for hours on the glut of microscopic plankton that sweeps in with the current to arrive at Baa Atoll’s Hanifaru Bay.

See them: Sustainable expeditions operate in Hanifaru Bay between May and November, when the south-west monsoon season turns this sleepy lagoon into a plankton feast, bringing lots of chances to spy feeding mantas. Scuba diving is no longer permitted here, but even snorkellers can spot mantas going for a wash at reef cleaning stations, where smaller fish floss the mantas’ gills, polish their skin and remove parasites. 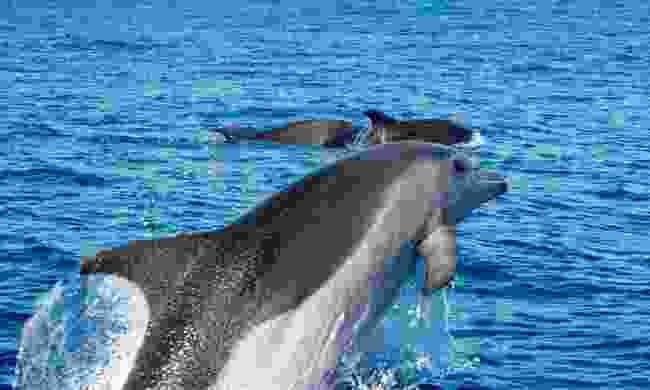 Swim with Madeira's many dolphins (Shutterstock)

All kinds of dolphins can be admired off the coast of this island. A half-dozen species visit the waters here, including bottlenose, common and Atlantic spotted dolphins, and it has excellent visibility for diving.

See them: Year round, but dolphins are best seen from May to September. It’s possible to organise a boat or catamaran trip from Funchal’s harbour, which usually offers the chance to swim among the dolphins.

Beginner and more experienced divers alike can also find them at several dive sites at different depths in Garajau Nature Reserve, where you can swim around its shipwrecked sites and also encounter barracudas, giant anemones and plenty more.

The best places in the world to see orcas

Where to track chimpanzees