There is a fresh candidate to join the premier league of ‘Great Swimming Pools of the World™’. Cool, sparklingly clear and shimmering in dappled shade, the pool is formed by granite boulders and fed by a waterfall on the Regueiro dos Enxurros stream. I chanced upon this sublime spot on a hot afternoon while hiking through the wild Serra d’Arga range of hills in Portugal’s northern Minho region.

Actually, I have a water snake to thank for the find. My walking companions and I disturbed the coiled creature while we forded a stream. It slithered away, but we followed  it around some rocks to the pool. The water looked so inviting, even harbouring a hidden snake in its shadowy depths, that we peeled off sweaty T-shirts and jumped in.

Having grown up in northern Portugal, I’m frequently asked for tips on exploring the region. If my questioners are hikers, nature lovers or merely adventurous, it is the chain of craggy mountains, running parallel with the coast between Porto and the river Minho to the north, that comes to mind. The Serra d’Arga, one link in this chain, rises 825 metres out of the sea and is deserted save for wild ponies and the ruined São João monastery. There are few marked walking trails, but over the years I have followed countless ancient shepherds’ paths across these wild uplands where birds of prey wheel overhead and boar scrabble in the scrub.

As with so many parts of Portugal there are always wonders and fresh discoveries, so I should really not have been surprised to come across enchanted rock pools of a kind that in other places would feature in brochures and have railings and drinks stalls. But there was something unusually elating about this hidden spot. Not even water snakes could keep me away. 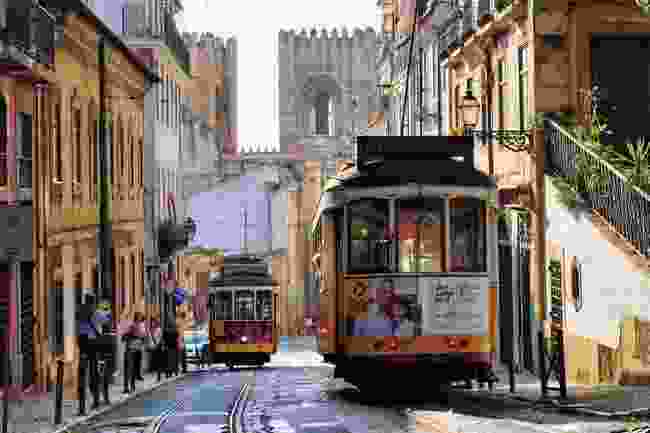 A tramway in Alfama (AWL)

When to go: Year round.

Why do it: To revel in the location, and for the palaces, castles and monasteries that  tell the story of a proud and ancient nation. To savour gourmet meals and be transported to other realms by the music. And because laid-back Lisbon, sprawled over hills on the wide Tagus estuary,  is a beauty and it knows it.

The most eye-catching part of town is the Moorish Alfama quarter of cobbled alleys, miniature squares and whitewashed houses with wrought-iron balconies, rising in tiers from the great Tagus river. You will probably hear the drums of Mozambique and Cape Verde as you stroll through the Alfama, reminders of when this small country commanded the sea route to the east and ruled an Empire.

Unimaginable wealth flowed Lisbon’s way while Portugal controlled the spices trade. The trappings of this era are most evident in Belém district, reached by a tram ride along the Tagus estuary. It was from here that Vasco da Gama and other navigators sailed during Portugal’s golden age of exploration.

Find the Torre de Belém fortress at the water’s edge.  This most photogenic of landmarks was built in the 16th century to guard the maritime headquarters. Centrepiece of the district is the astounding Jerónimos monastery, the most exuberant example of Manueline architecture. This is the flamboyant, Portuguese style that celebrates the seafaring exploits with stone-carved extravagances such as sails and sea-monsters and here, royal sarcophagusi rest on marble elephants.

Bohemian Bairro Alto is the district to listen to fado, Lisbon’s soulful, homegrown music. Fado gives expression to the notion of saudade – an ethereal longing for something lost or unattainable. Fado houses, most of which are also bars and restaurants, can be found amid the Bairro Alto’s stone stairs and steep streets. Follow your ears. 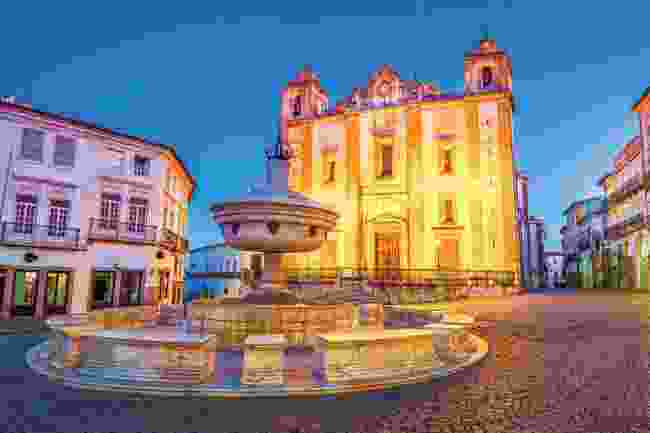 Giraldo Square at the heart of Évora (Shutterstock)

When to go: Spring and autumn are best. Summers can be baking.

Why do it: For a multi-stop tour through sun-baked plains of cork-forest, historic towns, whitewashed villages, Moorish citadels and hilltops crowned with castles.

Over the last few years the Alentejo – literally ‘beyond the Tagus’ – has become suddenly and unexpectedly popular. However, the region covers a huge area, about a third of the country but with barely a tenth of the population, so it still feels empty and in parts remote.

A journey across the region between Lisbon and Faro in the Algarve, is the practical way to make the most of it.

The unmissable marvel is Évora, a UNESCO World Heritage Site and sightseers’ dream. Treasures, all tightly packed within massive city walls, range from Portugal’s best-preserved Roman temple to a chapel lined with human skulls. Then there are gleaming towns built from the locally-quarried marble: Estremoz where a legendary queen worked miracles; and Vila Viçosa, seat of Portugal’s last royal dynasty.

Marvão and Monsaraz are spectacular walled hill villages dominated by medieval castles. Further south you can stay on a cork-growing plantation near Grândola, or by tranquil Lake Alqueva, a vast expanse of water, artificially created by a dam.

Mértola, on a rocky gorge of the Guadiana river in the far south, has a fabulous fortress and Portugal’s only surviving Moorish mosque. 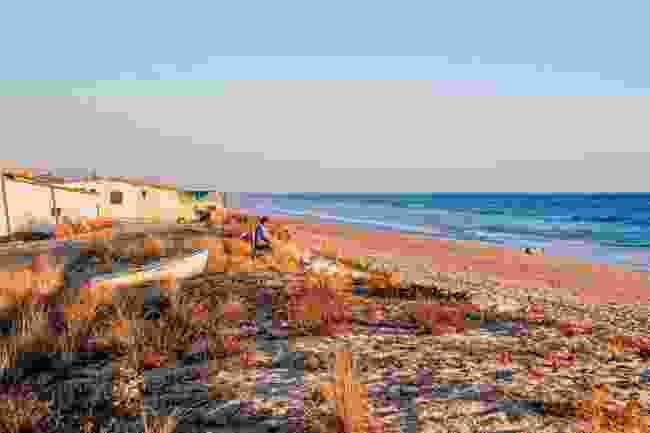 When to go: Spring and autumn are best. Winter can also be wonderful for birding.

Why do it: Because there is so much more to the Algarve than the thronging beach resorts – explore its nature-rich east-end and ruggedly wild west.

Slice Portugal’s deep south into three, roughly equal, pieces and you find a trio of quite distinct Algarves. The idea here is to forget the touristy middle section, and instead explore both the bird-rich flatlands of the east, and the wild, sea-surged west.

Eastwards, beyond Faro, the coastline splinters into marshy wetlands, salt flats and sandy islands which emerge and disappear with the tide. Spoonbills, flamingos, and waders that winter in West Africa find their way to Ria Formosa NP in huge numbers.

The waterfront at Tavira, on the Gilão estuary is lined with elegant, 18th century classical facades built on the prosperity of tuna fishing. Have lunch at a quayside seafood restaurant before catching the ferry out to Ilha de Tavira island, an 11km-long strand of tide-washed, desert island-esque sand.

Around Sagres over on the western side of the Algarve, gulls swirl and hover over sheer 75m cliffs. The furthest promontory is Cape St Vincent, the very corner of continental Europe, punctuated with a lighthouse. Turn right here and you are on Portugal’s west coast, where a track off the main road leads to Arrifana beach where waves crash onto expanses of sand overhung with reddy- brown bluffs. A short way inland, you’ll find the Moorish town of Aljezur, all whitewashed walls and red tiles topped by a ruined castle 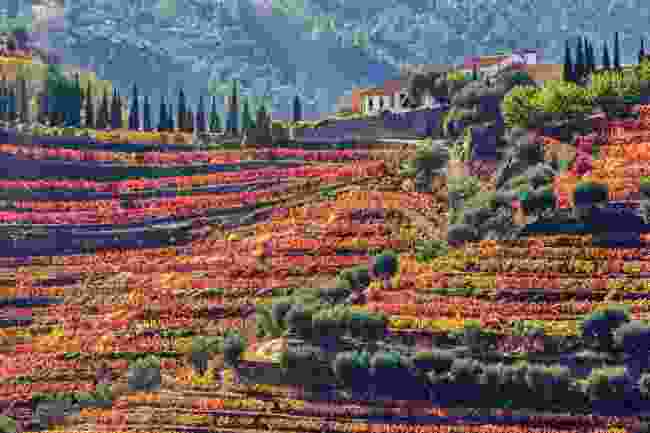 Vineyards of the north (AWL)

When to go: Avoid winter

Why do it: To meander through one of Europe’s most isolated and forgotten corners. For vinous treats and hiking in far-flung mountains.

From Porto, wind eastwards up the Douro valley into the heart of port wine-growing country where vines and silvery olive trees grow on terraces hewn out of precipitous mountainsides. Stay at Pinhão for winery tours and tastings, before continuing up to the remote alley of the Côa tributary where Europe’s most extensive array of Palaeolithic rock engravings was discovered in the 1980s.

Then head north for Tras-os-Montes – literally ‘behind the mountains’ – in the far right-hand corner of the map. Montesinho Natural Park, which begins just beyond the region’s fortress-city capital Bragança, is Portugal’s wildlife-richest area. Hares leap through the heather blanketing this giant hump of wild and exposed upland, and you might spot foxes and genets, or otters in the streams. Wolves are rarely seen but their spine- tingling howl is sometimes heard at night.

Return westwards through the Minho region where Peneda-Gerês NP has superlative hiking. Much of it is on newly-waymarked trails through dramatic mountains such as the Trilho dos Moinhos de Parada (Trail of the Mills) near Ponte de Barca. 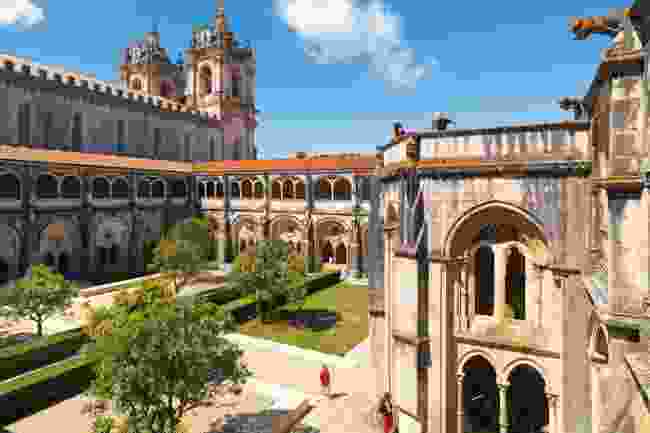 When to go: Spring and autumn are best.

Why do it: The central regions, between the Tagus and Douro rivers, offer a window on Portugal’s national story, while some magnificent landscapes unfurl along the way.

Driving north from Lisbon, sightseeing spectacles arrive thick and fast. Start with Alcobaça Monastery, raised in gratitude for victory over the Moors and best known for its effigies of star-crossed noble lovers Pedro and Inês, buried toe-to-toe. Next comes honey-coloured Batalha, the monastery built to give thanks for defeating the Castilian army in 1385. It holds some extravagant ‘Manueline’ architecture and the tombs of kings and queens.

Head inland to Tomar, a riverside town dominated by the Knights Templar stronghold where Prince Henry (‘the Navigator’) held court. For some relief from the sites, deviate next through the glaciated valley of the Zêzere river into the wilds of the Serra da Estrêla, mainland Portugal’s highest mountain range.

Last stop before Porto, has to be Coimbra (pronounced ‘Queenborough’), one of Europe’s oldest University cities, humming with activity during student terms. At other times, the hilly old town feels more like a huge museum; do not miss the university library, a trio of baroque rooms with expanses of gilt wood and more than  a million books. 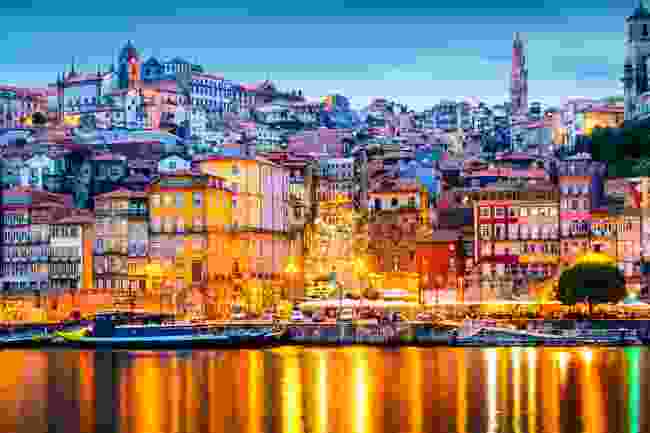 Porto old city skyline from across the Douro River. (Shutterstock)

When to go: Year round.

Why do it: To revel in the energy of an ancient trading city that has rediscovered its mojo. For graceful bridges, hidden courtyards and alleyways, art nouveau cafés, gilded churches, captivating museums…and for the port wine (of course!)

Portugal’s second city hardly knows what has hit it, so rapidly has it zoomed up the city break stakes to find itself one of Europe’s most buzzing destinations. Most of the action is within a tight kernel of the historic centre and tarted-up waterside Ribeira district. The port wine ‘lodges’ where there are tours and tastings, are across the river in Vila Nova de Gaia.

But there is so much more to Porto. From the modern new Casa da Música opera house to the Serralves contemporary art museum, this is a city consciously showing its 21st century face. However, for a glimpse of Porto before the high-tech age, you can find boisterous bartering of food and handicrafts in Mercado do Bolhão covered market.

Further afield are some districts still little touched by tourism. One option is to hop on the clunking old tram hugging the north bank to Foz do Douro at the river mouth. Another is to hire a bike and pedal a new cycle route along the same route. The path continues along the salty-aired Atlantic seafront to the Parque da Cidade, beautifully landscaped with lakes, woodland and sculptures.