We stepped outside our hotel and the heavens opened. It was past 4pm, but we were determined to try our luck in Minneriya National Park and witness ‘The Gathering’: the largest congregation of wild elephants in the world.

When the driver turned up in his Mahindra jeep, he smiled. “Not Minneriya”, he said in his broken English, “We go Kaudulla”.

Slightly taken aback, we climbed aboard and set off, racing through the rain to Kaudulla, Minneriya’s lesserknown sister reserve. We were the last vehicle to enter and, as we navigated our way through dark jungle, we passed plenty of Jeeps heading the other way but precious little wildlife.

Finally, we emerged onto a large plain, and while the rain had eased, dark clouds billowed low in the sky. We pushed on, passing more exiting Jeeps with sodden occupants. 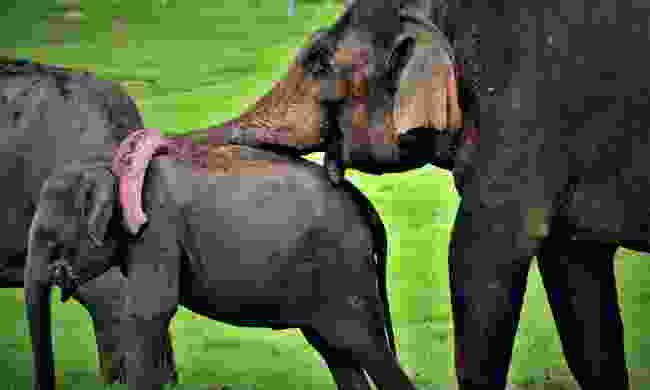 Our driver seemed to relax, and at that point the dark grey shadows of elephants started to emerge on the horizon. More appeared in the grasslands and soon they were close enough for us to smell the earthy hunks of grass they plucked with their trunks and twisted into their mouths. The animals appeared unru­ffled as we raptly observed them, then our driver pointed to the distant lake where further herds dotted its banks – a count of 300 seemed conservative.

Minneriya and Kaudulla are connected by a wildlife corridor and the spot where elephants congregate depends on the day. Our driver admitted we had been lucky, although our journey around Sri Lanka often resulted in serendipitous, right-time, right-place events, such as seeing dolphins while fishing and, as we walked hilly tea trails, stumbling across sari-clad female tea pluckers weighing huge bags of leaves. 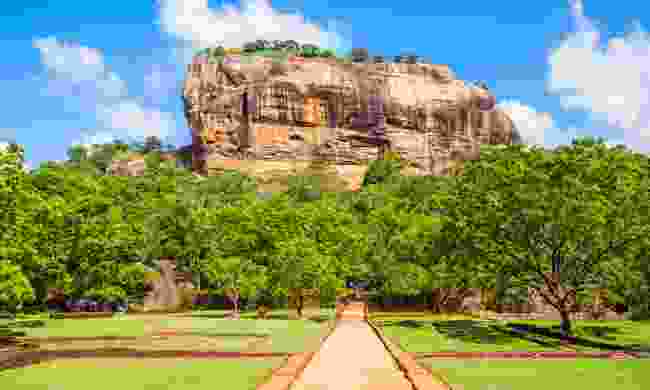 Why do it? To tick off five of Sri Lanka’s eight UNESCO World Heritage Sites. 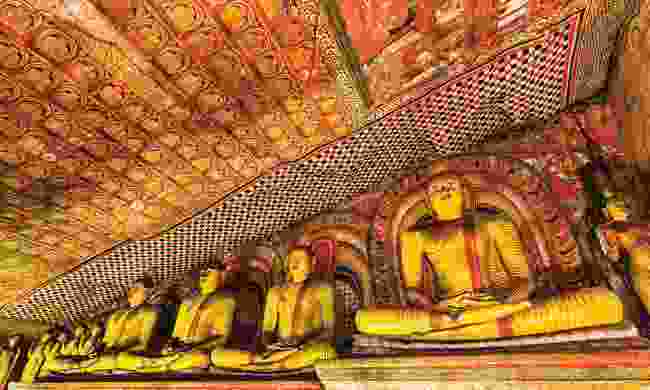 Kandy was the last kingdom to fall into British hands in 1815. Busy by day yet ghostly quiet by evening, it’s popularly visited for its gilt-roofed Tooth Temple and the Botanical Gardens flanking Peradeniya University’s leafy campus. Other sights are deserving too – do the ‘three-temple loop’ by tuk-tuk and travel to the outskirts of the city to visit three intricately carved, historic devales (sacred shrines) at Embekke, Lankatilake and Gadaladeniya.

In the dry-zone plains some three hours north of Kandy lie the origins of Sri Lankan civilisation – vast, ancient cities with man-made tanks, graceful stupas and carved moonstones lying partly excavated beneath dusty forest. Anuradhapura and Polonnaruwa’s ancient ruins are extensive, and best explored by bicycle (hire one from the entrances). Visit former rocktop fortress Sigiriya as soon as it opens to avoid the heat and coach party queues, or scale Pidurangala rock, opposite, for views of Sigiriya’s giant lion paws. Not to be outdone, Dambulla’s cave temples glow in the late afternoon light.

Wind your trip up in an eco-lodge in Anamaduwa, ringed by rocky outcrops, rice fields and lotus-strewn lakes. From here, visit archaeological sites Yapahuwa and Dambadeniya (both former royal capitals), the rock temple at Mulegama and then Tonigala’s 30m-long rock inscriptions (the longest of its kind in Asia). Why do it? To experience one of the most scenic train routes in the world. 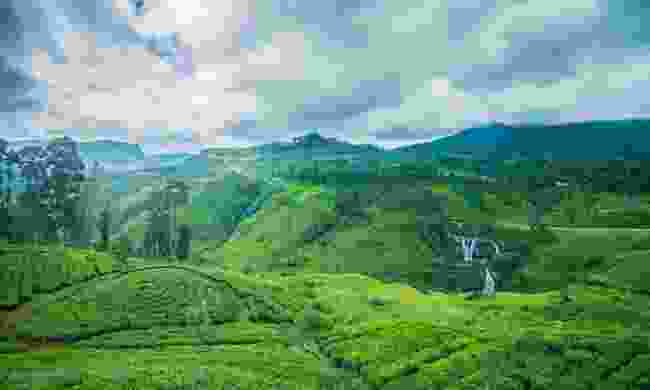 The Main Line Railway was built in the late 19th century to transport coffee, and later tea, between the hills and Colombo in colonial-era ‘Ceylon’. It took over 50 years to complete, and the track crosses waterfalls, climbs steep escarpments and tunnels through 46 hills. Take it all in on a slow journey, hopping on and off to explore key sights. Second-class carriages reward with better views as you can open the windows.

Begin in Colombo, Sri Lanka’s multi-ethnic capital city, and get your bearings on a Colombo City Walk. Join charming, in-the-know guide Mark Forbes as he takes you through key precincts such as the Pettah Market district and Colombo Fort.

Then board a train from Fort Railway Station to cultural Kandy via Kadugannawa (home to the island’s national train museum), where the track inclines nearly 430m in just over 20km.

From Kandy, continue to Hatton, a colonial-era market town surrounded by a breath-catching scene of tea estates, lakes and forests. Navigate estate trails on foot and tour tea factories buzzing with clunky, century-old machinery. Stop for lunch at Nuwara Eliya, a former British hill station dating back to 1847, a 15-minute drive from Nanu Oya station.

At Pattipola the track reaches its highest altitude (1,898m) before it descends into Sir Thomas Lipton territory and Haputale, a long ridge marked by viewpoint walks. The widescreen panoramas reveal low-lying plains and hazy glimpses of the Indian Ocean, 75km in the distance.

To get to end-of-the-line Badulla you cross the Nine Arches Bridge, although there are better places to stay near Demodera, where the track makes a 360-degree loop under and into the station. Or try in Ella, where the mountains hikes are up through misty tea estates and old pine forests. Why do it? To experience the warm and engaging culture of the island’s north. 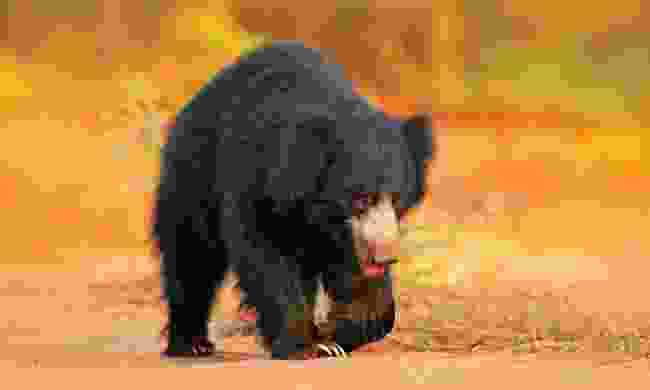 Shaped by its vibrant Hindu culture, proximity to India’s Tamil Nadu and (of course) 26 years of civil war, Sri Lanka’s north has a different feel to the rest of the island. Start at Kalpitiya, an arid peninsular curved around a lagoon popular with kitesurfers, and stay along escapist feel Alankuda Beach. Wilpattu National Park is around a 90-minute drive away (or stay in a comfy safari camp on its boundary) and it’s worth a look. This vast, lesser-visited reserve is a sanctuary for leopards, sloth bears, crocodiles, turtles and also has abundant birdlife, all drawn to the forests and shallow rain-fed lakes.

Continue to former pearling centre, Mannar, a sun-baked fishing town famous for baobab trees, wild donkeys, gulls and terns, as well as a profusion of mosques, churches and kovils (temples), and a crumbling colonial fort. Accommodation is basic – book well in advance to stay at Abode Hibernation, a simple beachfront homestay. Jaffna town is dotted with historic buildings, an old fort and avenues of the region’s prized karthacolomban mangoes, while the peninsular offers enough to fill a good few days; highlights include visiting the Nallur Kovil and Point Pedro Lighthouse (Sri Lanka’s northernmost point), navigating causeways to less-habited islands, taking ferries to Nagadipa Temple on Nainativu Island and Delft Island, and snacking on fried crab at pristine (and popular) Casuarina Beach.

Before flying back to Colombo, drive south via Elephant Pass to Nilaveli, near Trincomalee’s deep natural harbour, for a final few days. The ocean there is warm and shallow – ideal for snorkelling – while cruises and whale-watching trips operate during the summer. 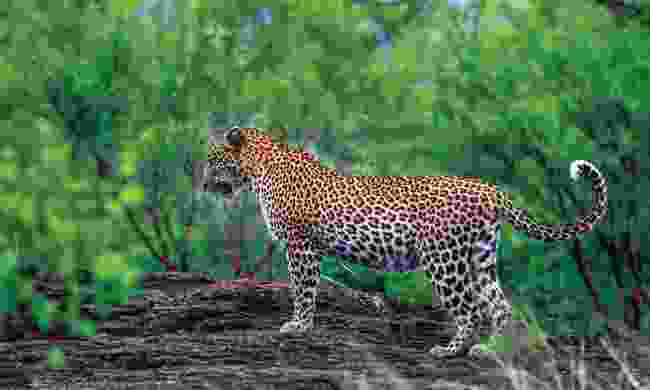 The leopard is a solitary creature (Shutterstock) 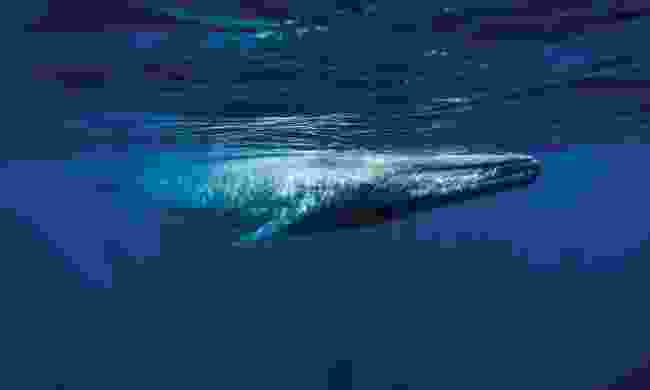 Sri Lanka is synonymous with sandy beaches and Tomb Raider-like ancient cultural sites. However, the island is hugely biodiverse for its size and harbours a vast array of wildlife.

If you’re vying to see some of the world’s largest land mammals, Udawalawe National Park, a southern reserve centred around a meandering lake, fosters around 400 Asian elephants. Further west, Yala National Park is home to the widest slice of wildlife in Sri Lanka, and leopards are often spotted striding through the scrub or relaxing in the crook of tall trees. Sloth bears are a less common sighting, although they tend to be more visible in May and June when they feast, drowsily, on the fruits of the palu tree.

On the south coast, Mirissa’s harbour is a popular launchpad for blue whale cruises between November and April when the ocean’s at its calmest. Blue whales can sometimes be spotted within 30 minutes of leaving the shore. Glimpses of sperm whales, however, require a little more luck. Why do it? To slowly explore southern Sri Lanka at your own leisurely pace. 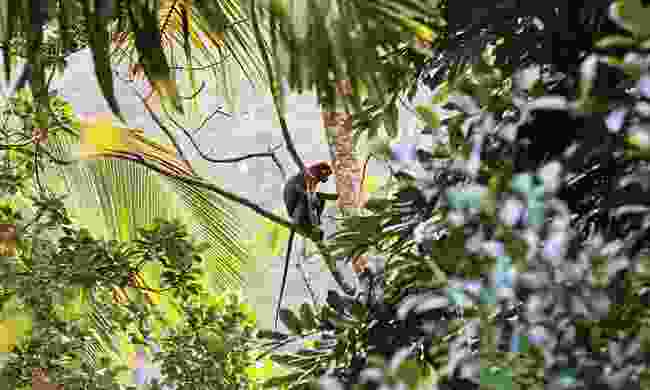 The south coast is its own mini destination with enough diversity to fill a two-week trip. Tangalle tends to be quieter than Galle, and its further-flung beaches – Rekawa, Mawella and Kahandamodera – are largely undeveloped and fringed by shallow lagoons.

Galle is buzzier and best for eating out and shopping. Explore the city’s 17th-century fort, a UNESCO World Heritage site. Its staunch, well-preserved coral-and-lime ramparts encircle an old town rich in churches and decorative Dutch- and British-era mansions, many of which are now desirable galleries, boutique hotels and gelatarias.

You’re never too far from a beach either, and many take on their own flavour – Weligama for surfing, Mirissa for whalewatching, Dalawella for turtles, and Habaraduwa for long evening strolls.

Galle’s rice- and coconut-rich hinterland feels like another world. Explore the area by bicycle, where kingfishers, peacocks, herons, monkeys, monitor lizards and mongoose thrive. Also in the vicinity are cinnamon estates and spice gardens, and even a small lowland tea estate. Why do it? To combine Kandy and the hills with off-the-beaten-track Gal Oya National Park and chilled-out eastern beaches. 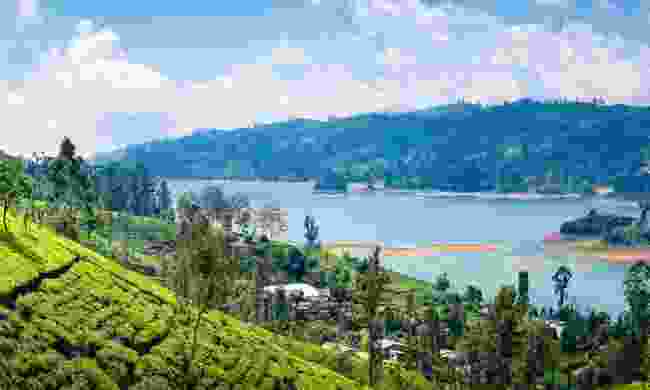 Sri Lanka’s a year-round destination, but when and where you visit depends on its weather patterns, which are dictated by opposing monsoons. This is why many head east in the summer, for the driest weather and calmest seas. This route crosses the island by road and flies back to Colombo from Batticaloa Airport.

Historic Kandy, a four-hour drive from Colombo, makes a logical first stop, and the city’s treasure trove of religious sites include the gilt-roofed Temple of the Tooth. Kandy is also the gateway to the hills – their lush tapestry of tea estates and thick jungle are best navigated by train. Easterly Ella is a popular activity hub with hikes up Little Adam’s Peak and Ella Rock.

Wildlife sightings are patchy in Gal Oya NP (as is its mobile signal), although it makes a great stepping stone from the hills to east coast beaches. The reserve sees few visitors, and exploring the park’s pristine surroundings – home to Veddha villages, vast jungle and shy wildlife – feels like you’re stepping back in time.

There’s only one lodge here, but it offers curated experiences, including watching elephants swimming on a boat safari, bicycle tours and a walk of discovery with a village chef.

From here it’s a couple of hours’ drive to Passikudah, which offers year-round swimming and water sports – although it’s very much resort-based. Instead, low-key Kalkudah is around 20 minutes south and is by contrast virtually undeveloped, with a 12km-long bay. The preserve of local fishermen, it’s fringed by coconut plantations and cashew estates.

The best places to stay in Sri Lanka

Best things to do in Colombo, Sri Lanka's vibrant capital

Why you should visit Sri Lanka as soon as you can