From eye-popping Italian islands and cheery villages to landscapes painted by nature, these multi-coloured rainbow destinations are guaranteed to brighten up your day... 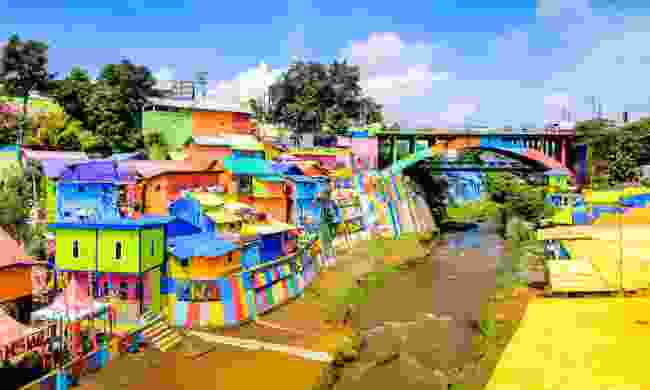 Just south of Malang, a city in East Java, Kampung is an explosion of colour in what was once a drab corner of Indonesia.

Management students from a nearby university came up with the idea of painting the houses. A local paint company donated the paint. And a previously unremarkable village was turned into a happy place of rainbow colours, suddenly receiving an influx of money from selfie-seeking visitors.

It also inspired locals to clean up their rubbish-strewn river, so there has been a positive environmental impact, too. 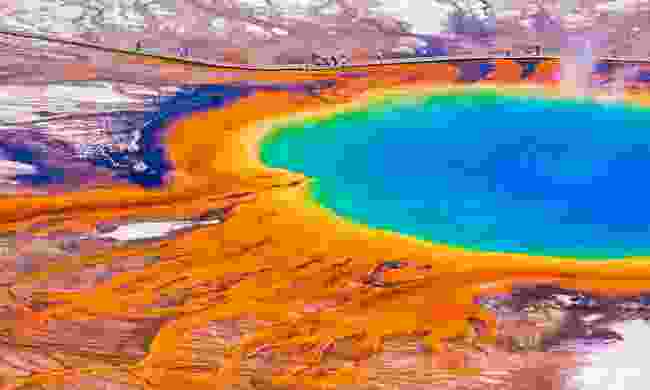 Yellowstone’s Grand Prismatic Spring is the largest hot spring in the USA and the third largest thermal spring on the planet.

But it’s the rainbow-coloured bands of heat-loving bacteria that make it truly memorable. The sulphur fumes may burn your eyes, but it's certainly photo-worthy. 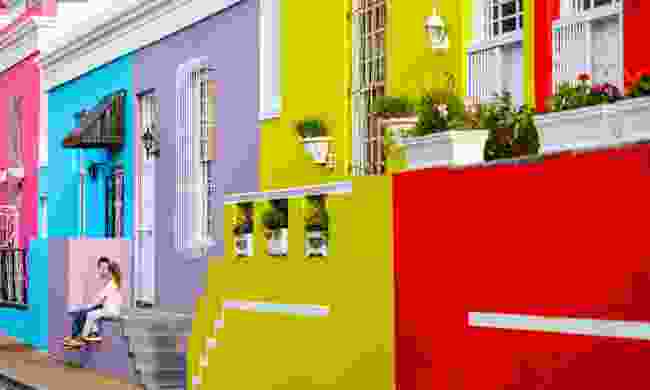 Kids sitting on steps in the Bo-Kaap quarter (Shutterstock)

Sitting at the foot of Signal Hill on the fringes of central Cape Town, Bo-Kaap was once known as the Malay Quarter, home to workers brought in from Malaysia, Indonesia and the rest of Africa to work.

Built in the 1760s and rented to the workers, the houses had to be white as per the terms of the lease. When the workers were eventually allowed to buy the properties, they painted them in bright colours to express their freedom and individuality. 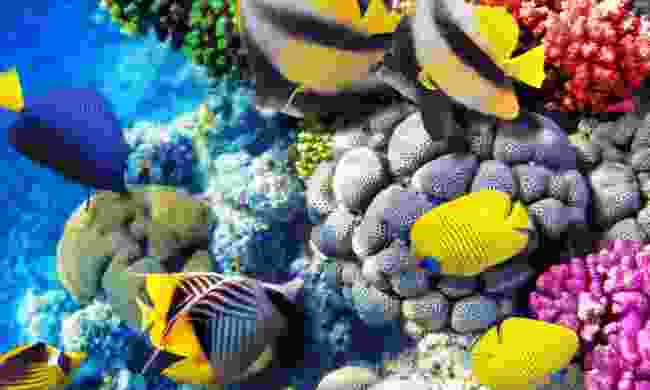 Coral and tropical fish in the Red Sea (Shutterstock)

The Red Sea boasts one of the richest and most diverse underwater ecosyems in the world, with over 1,200 species of fish, 10% of which can’t be found anywhere else.

This is largely due to the 2,000 kilometres of coral reef along its coast. Some of the coral is 5,000 - 7,000 years old. It’s lost none of its vibrancy, and coupled with the neon fish that call it home, remains one of the most colourful places on earth. 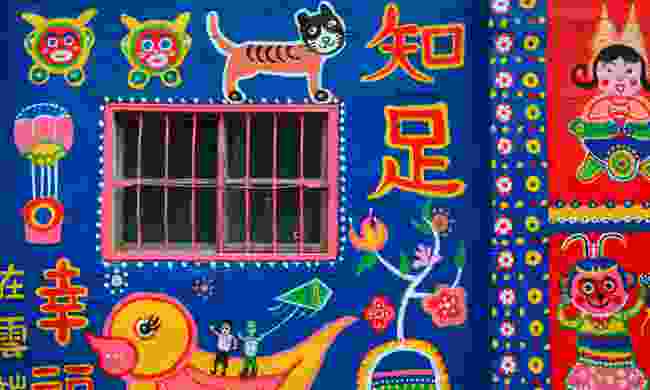 Colourful graffiti painted on the wall in Taichung (Shutterstock)

What began as an attempt to save houses in the Nantun District of Taichung has turned into one of Taiwan’s most popular and colourful tourist attractions. Former soldier, Huang Yung-Fu, started painting houses in the settlement to stop them from being demolished.

Over the years he has added colourful artwork, including birds, animals and people, to most of the remaining houses in the village, gaining it the moniker of Rainbow Village. 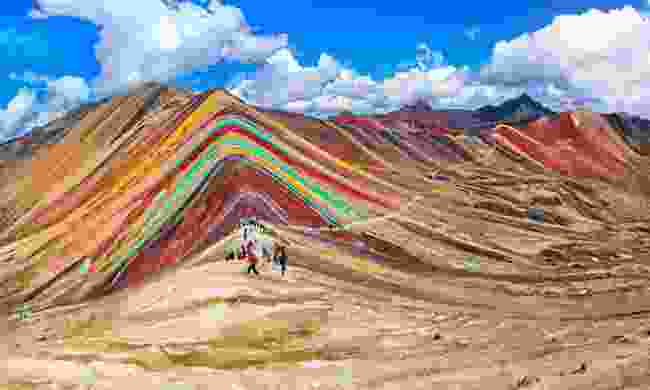 A two-hour drive from Cusco, Vinicunca, Peru’s Rainbow Mountain, has become one of the country’s most popular tourist attractions. Formed millions of years ago, the ridges of sediment are made up of a variety of minerals, each providing its own vibrant hue of either pink, yellow, turquoise and burgundy.

Sitting at 5,200 metres, you’ll need to take time to acclimatise to the altitude – and the mix of colours. 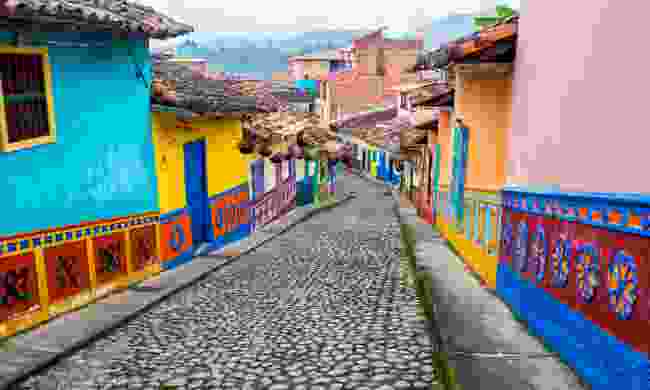 The Plaza de Zocalos is rainbow-coloured, too, and the perfect place to have a drink and people watch. 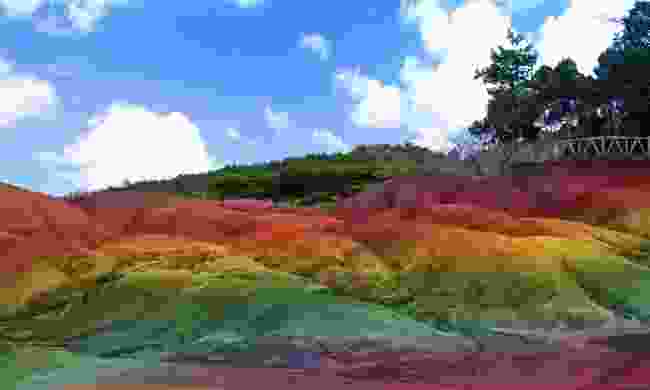 A series of colourful dunes in the middle of tropical rainforest, the Seven Coloured Earths near Charamel in Mauritius is believed to have formed from the decomposition of volcanic rocks. It has settle into stripes of colour ranging from violet and red through to yellow and blue and is best viewed at sunrise, when the colours are at their most vibrant. 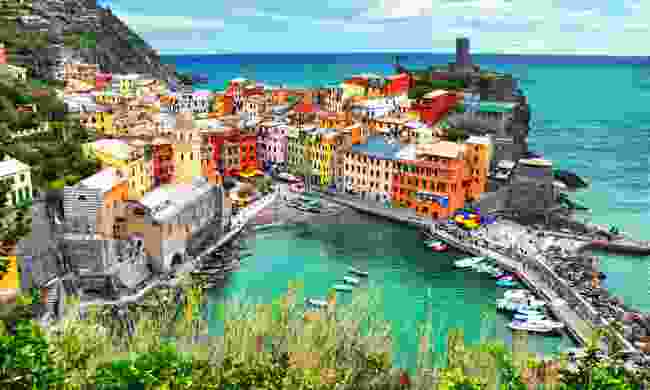 View of Vernazza from trail (Shutterstock)

Hugging the rugged coastline and tumbling down towards the Ligurian Sea, the five tiny villages that make up Cinque Terre are a riot of colour.

Walking the jagged coast path between them is one of Italy’s most treasured treks, rewarding hikers with fresh sea air and spectacular views, especially when you round a headland and catch your first sight of villages like Vernazza and Manarola. 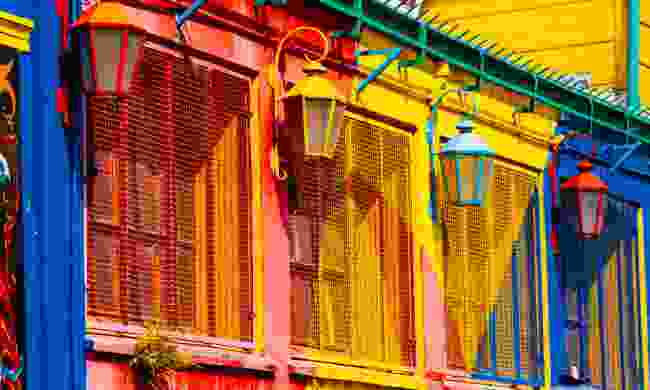 La Boca is a working-class suburb in Buenos Aires that is famous for two things – La Bombonera, the home ground of Boca Juniors football team and Caminito, a narrow alley flanked by bright, zinc shacks.

The colours are a reminder of the district’s early immigrant days, when a splash of paint was the only way to show pride in the humble dwellings. Now the area is bursting with steakhouses, bars and cafes and the modern art museum, Fundación Proa. 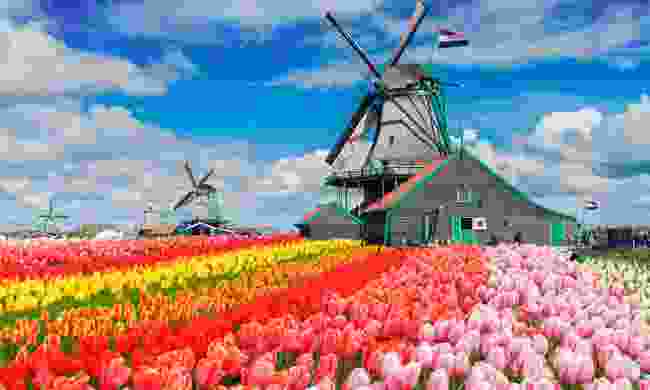 Between March and May every year, the fields around Keukenhof in the Netherlands are transformed into a kaleidoscope of colour as the country’s world famous tulips bloom.

They’re not just for show. These tulips will be picked and sent all around the world, an important source of revenue for this tiny country. That doesn’t make it any less spectacular, especially when framed with one of the Netherlands' famous windmills. 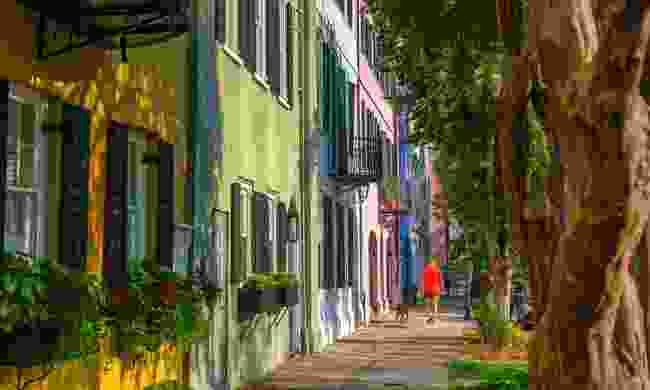 This row of historic houses in Charleston, South Carolina, is the longest cluster of Georgian row houses in the United States.

With their bright colours and mature trees, they are also amongst the most beautiful. You’ll find them on East Bay Street, north of Tradd Street, and south of Elliott Street. 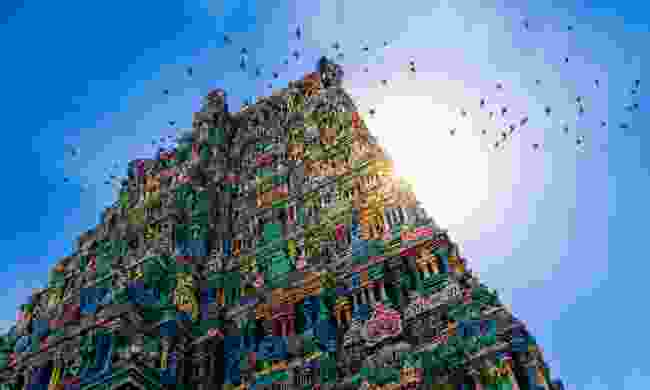 This ancient city on the Vaigai River in the southern Indian state of Tamil Nadu is dominated by the 14 colourful gopurams (gateway towers) of Meenakshi Amman Temple.

It's festooned with thousands of rainbow coloured carvings of Hindu gods. It is also home to colourful celebrations, like the Chithirai Festival, held every April to celebrate Meenakshi and Lord Vishnu. 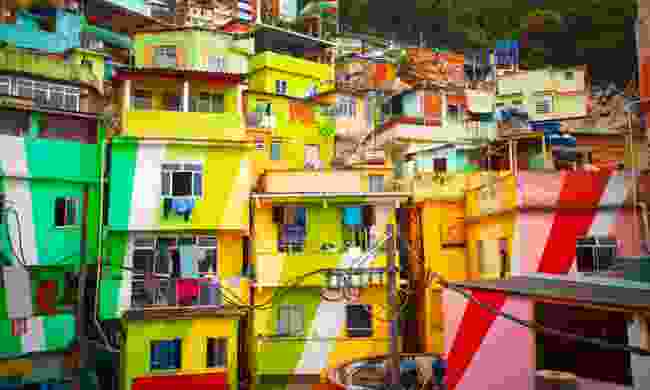 Set on the the slopes of Morro Dona Marta, the rainbow coloured favela of Santa Marta is one of the steepest in Rio. It has over 8,000 residents crammed into its makeshift wooden and brick houses, each painted in an assortment of cheerful hues.

A popular location for both TV series and film, it most famously hosted one of the most spectacular chase scenes in Fast Five, the fifth instalment of The Fast and The Furious franchise. 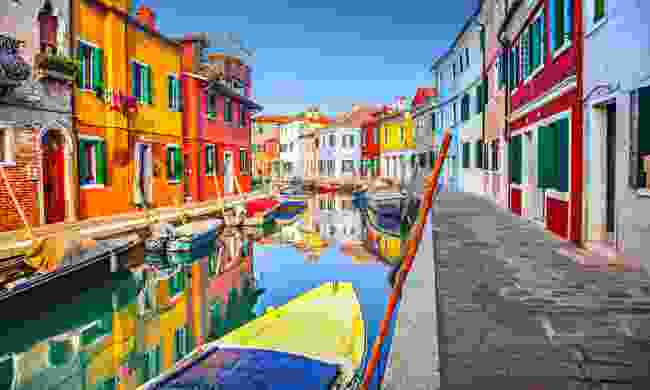 Burano is an island in Venetian Lagoon, famous for its multi-coloured homes, beguilingly reflected in the waters of the canals.

There are plenty of bars and restaurants for visitors, but it's very much a working town, with fishermen selling their catch straight from their boats, and old nonnas sitting on their verandas, making the island’s needle lace.

More awesome places around the world: