The fourth pyramid of Giza: Inside the new Grand Egyptian Museum

We take a sneak peek and go behind the scenes of 2020’s most anticipated opening: the Grand Egyptian Museum in Giza – the world’s largest archaeological museum...

9 mins
“This will be the biggest museum dedicated to a single civilisation anywhere in the world.”

My ebullient guide, Egyptologist Yomna Salama, proudly ran through a set of impressive stats as we cleared security into the Grand Egyptian Museum’s Conservation Centre, winding though long, strip-lit corridors with shiny floors.

There were guards everywhere, but if the place had the hallmarks of a maximum-security bunker it was for good reason. There are 19 laboratories here dedicated to the restoration and conservation of thousands of Egypt’s most precious antiquities.

They’re being brought back to best ahead of going on display in the museum itself, which is scheduled to open in October 2020. While its foundation stone was laid in 2002, the Arab Spring put the brakes on things. But with Cairo finding its feet again, workers are here around the clock. 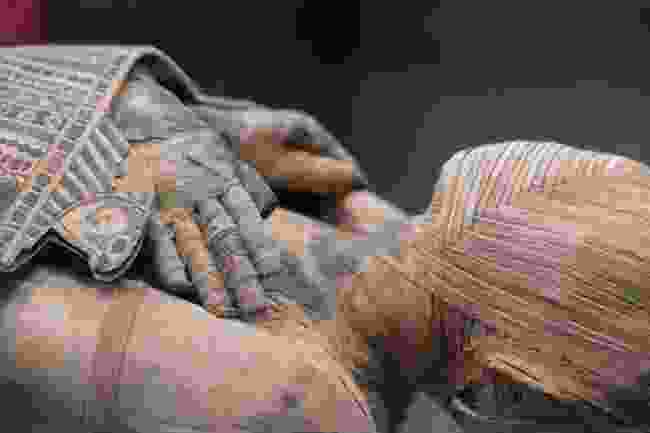 A mummy in the Grand Egyptian Museum (Shutterstock)

In the unlikely event that visitors get bored of looking at the greatest collection of Ancient Egyptian exhibits ever assembled, they can check out the view instead: the Grand Egyptian Museum (GEM) will overlook the wonders of the Giza Plateau, including the Great Pyramids.

Until then, limited pre-opening tours have been giving sneak previews ahead of the grand opening. 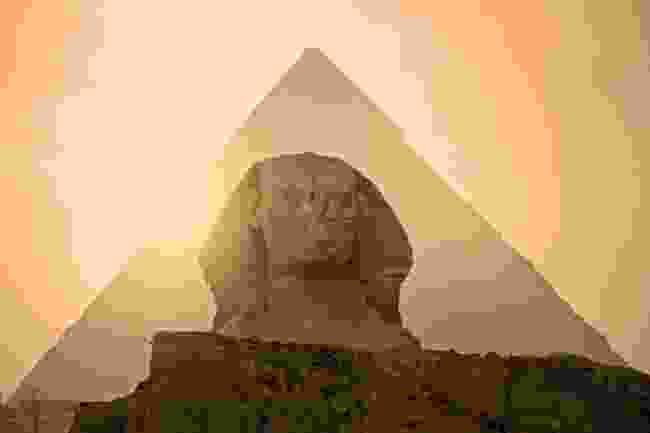 Sphinx of Giza, outside of Cairo (Shutterstock)

The guests got to see the exhibits as they were being worked on; the closest anyone without a PhD in Egyptology will get to the likes of  a 2,500-year-old Greco-Roman amphora with  wine still in it – among other things.

I was one of the lucky few to find myself behind that security line, to see what awaits visitors in October... 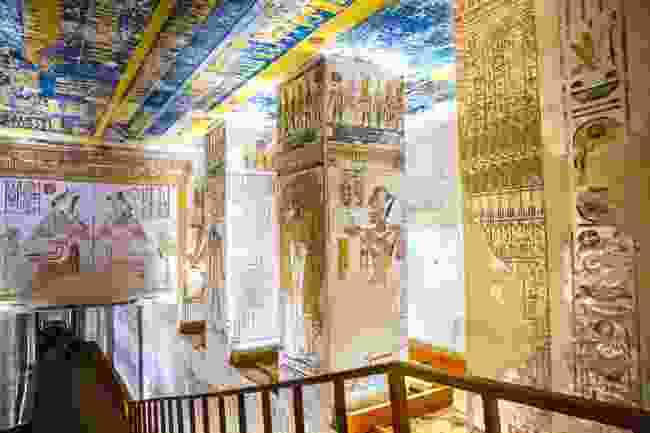 The first of my three stop-offs was in the Stone Lab. Before me, a colourful set of reliefs depicted the story of heretic King Akhenaten, who introduced monotheism (the belief that there is only one God) to Egypt in an attempt to wrest power from the religious elite. The inbred, malarial, alien-headed Akhenaten was the first pharaoh to use religion for his political gains.

When he died, aggrieved priests of the old order hid this limestone propaganda between the outer walls of a vast temple gateway near Aswan in Upper (Southern) Egypt, thus preserving it for us to enjoy some 3,000 years later. It was then onto a set of enchanting murals, whose story betrayed the ancients’ penchant for pleasure. 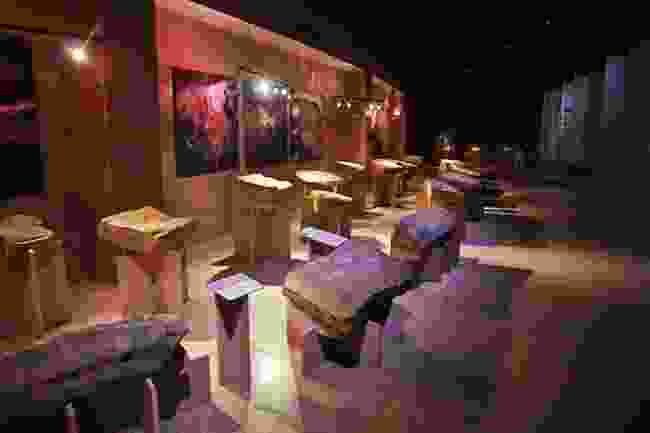 “Look at these high officials, they were party people!” declared Yomna, as she pointed to musicians playing the flute, harp and clarinet. Indeed, the fun folks of the Fifth Dynasty (2,450 to 2,300 BC) enjoyed a calendar of more than 100 parties and celebrations. Elsewhere, a white-coat restorer was busy using a toothbrush and a small stick to clean a beguiling set of funereal utensils.

Next to him another engrossed conservator made use of a slightly more modern magnifying glass to reassemble two impossibly ornate, miniature vases. How fascinating that for all of the modern, costly techniques incorporated to preserve these priceless items, sometimes Oral B’s finest does it best. 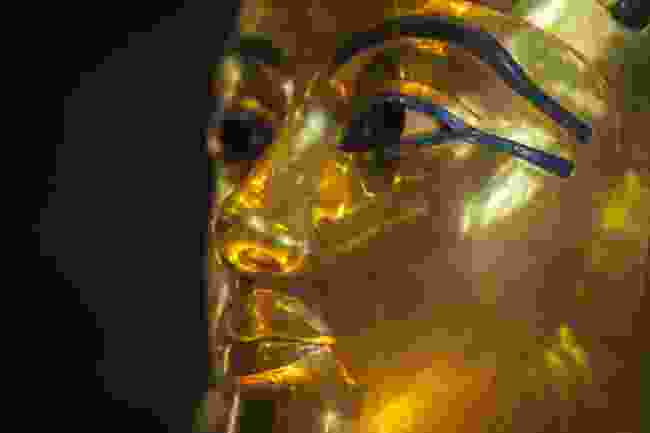 Of all the labs here, the greatest awe is to be found in King Tutankhamen’s room (though access is very limited).

Here, an operatic funeral procession of gleaming gilt chariots, ceremonial beds and kaleidoscopic coffins are brought into sharp focus against the whitewash of the lab’s walls.

When Howard Carter excavated King Tutankhamun’s tomb in 1922, it was thought that covering things in paraffin wax was the best way of preserving them. 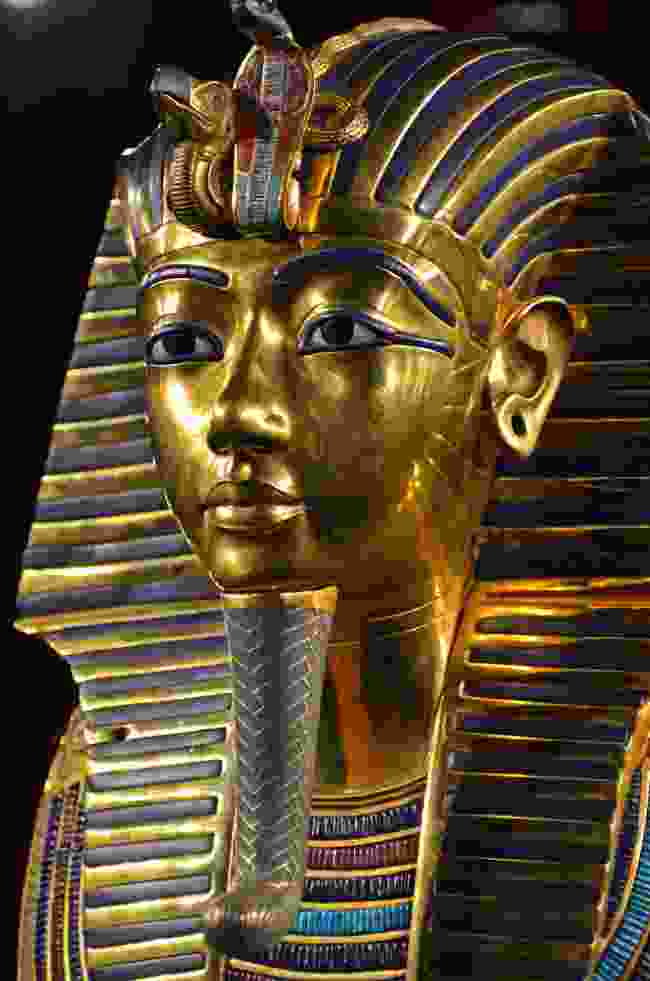 We now know that while this served a purpose during transportation it was also rather damaging in the long term.

I shadowed the person in charge of the room, watching as he painstakingly worked to remove some of the wax from one of Tut’s Russian-doll coffins. Its gold-leaf face was in immaculate condition.

I asked him which artefact he’d pinch if he knew could get away with it. “You cannot steal what is already yours,” came a swift and sage reply.

I realised after how sensitive a subject this was, with so many of Egypt’s treasures still residing in Europe’s heavyweight museums.

Most important are the Rosetta Stone at the British Museum, the Dendera Zodiac in Paris’ Louvre and Nefertiti’s Bust at the Neues Museum in Berlin. The Italians, courtesy of the Romans, are not exempt either: there are more obelisks currently standing in Rome than in the whole of Egypt.

The return of these three items was a hot topic for Egyptologist-in-chief Zahi Hawass when he spoke at the Saatchi Gallery in London last November.

We were both there for the launch of the Tutankhamun: Treasure of the Golden Pharaoh exhibition. 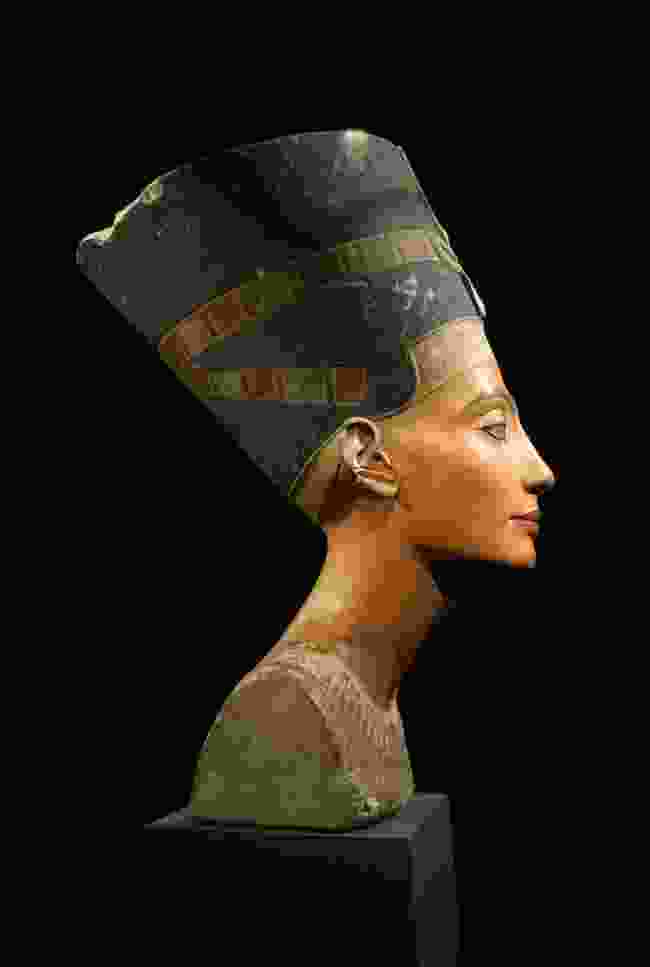 Nefertiti’s Bust at the Neues Museum in Berlin (Shutterstock) 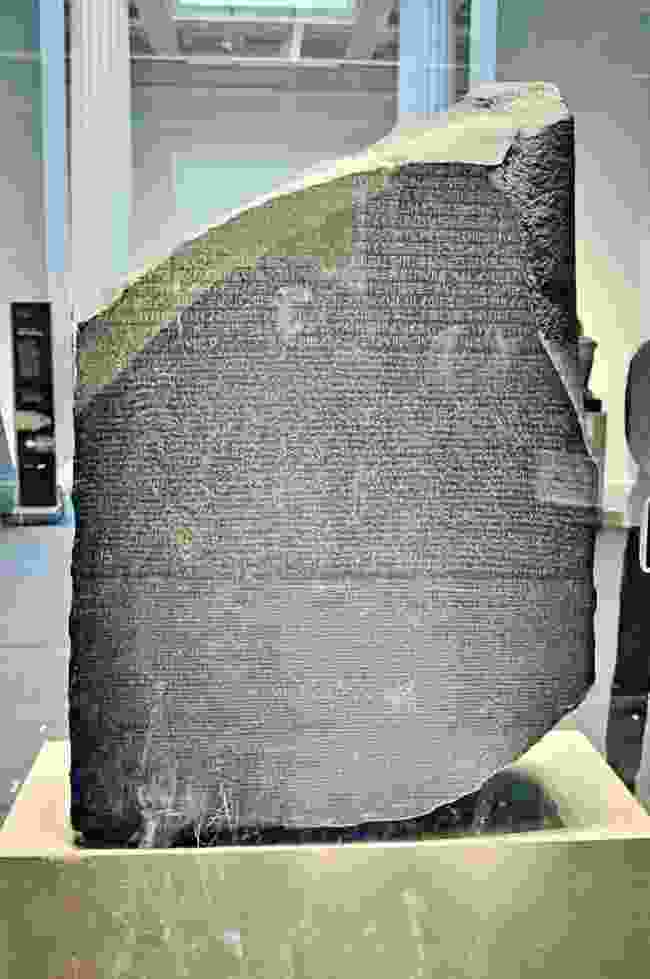 “The revolution made it difficult to do anything, but now there is an awakening among the world that there were many artefacts taken out of Africa during imperialism,” he said. “We will fight the museums and we will see who wins!”

Equally zealous about King Tutankhamun’s booty, he made clear that, “This will be the last time King Tut travels.”

The 150-object exhibition – in London until 3 May – will end its four-year world tour in 2024, finishing at the Grand Egyptian Museum, where it will be displayed in perpetuity, “in the shadow of the great pyramids of Giza.”

When it finally makes its way home, it’ll join the rest of King Tut’s 5,000-piece treasury, completing the collection for the first time since Carter dug it up nearly 100 years ago.

Not all are quite so fervent, though. Of the two Egyptologists I met on the trip, both were convinced that for the most part, having Egypt’s artefacts strewn across the world was an effective marketing campaign.

For the most part, though, I was inclined to agree with Hawass. We’ve done a good job of looking after these items, but it’s time to send them home. 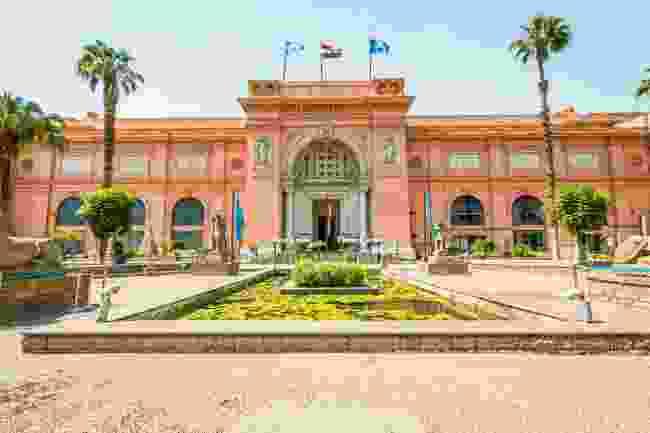 With my first hour up, it was onto the museum proper. Hard hats and hi-vis now donned, Yomna and I made for the main entrance.

I couldn’t decide whether the façade was beautiful or something that resembled an up-market mall. Perhaps the fact that the site will also house a conference centre, hotel, 10 restaurants and cinema was part of the design proposal.

Faceted, trompe l’oeil triangles (giving the illusion of being 3D) pair with hieroglyphs to lend a nod to the past; the rest comprises the clean lines of glass-and-steel functionality. The hope is that it’ll provide an unobtrusive blank-canvas to make the artefacts really stand out.

In the middle of the vast geometric atrium a 9m-high, red-granite statue of Rameses II stands proud and apt: the most celebrated of the New Kingdom Pharaohs, his nickname was ‘The Great Builder’, owing to the number of monuments he commissioned. 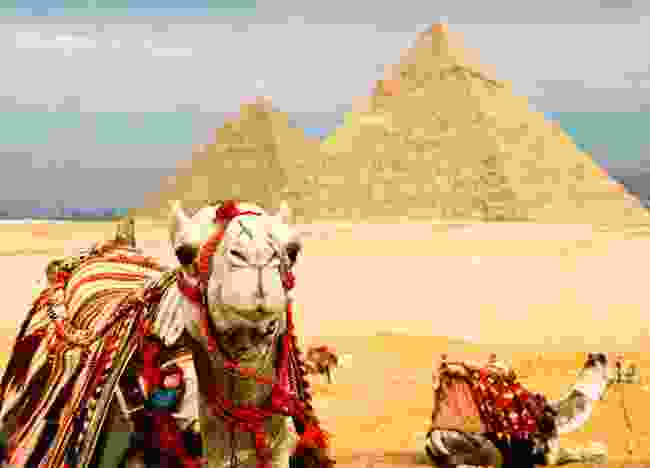 Camel at the Giza Site (shutterstock)

He also sired 100 children, wrote the world’s first peace treaty and ruled for 66 years. Looking around, it was apparent that there was still much to do before the opening.

What’s certain, though, is just how much of a positive effect the museum will have when it finally does open this year. This will surely do for Egypt what the Acropolis Museum did for Athens back in 2009.

After a decade of unrest, Egypt deserves the Grand Egyptian Museum. But while the GEM is not yet open, you can still visit the original Egyptian Museum on Tahrir Square. Something of a relic itself, it houses King Tutankhamun’s transfixing death mask. Certainly in the pantheon of the world’s most famous cultural artefacts, it has inspired fashion, film and funny haircuts.

On arrival, I made a beeline for Tut’s surprisingly unassuming room, which is hidden away in a dusty, badly-lit room on the first floor – like something in an Indiana Jones film. When I crept in there was no one, not even a security guard, present. In fact, the solid gold mask and I were alone together for the best part of 15 minutes before the hordes found us.

It was as mystical, marvellous and nostalgic as I’d hoped. When I saw the Mona Lisa for the first time, I remember my senses being consumed: music where there was no music before; darkness everywhere but the object in question. The same happened here.

When the Grand Egyptian Museum opens, visitors are bound to flock back to Egypt to see these ancient treasures for themselves, but for now I had this one all to myself. That big opening day in October could hang on for just a little bit longer. 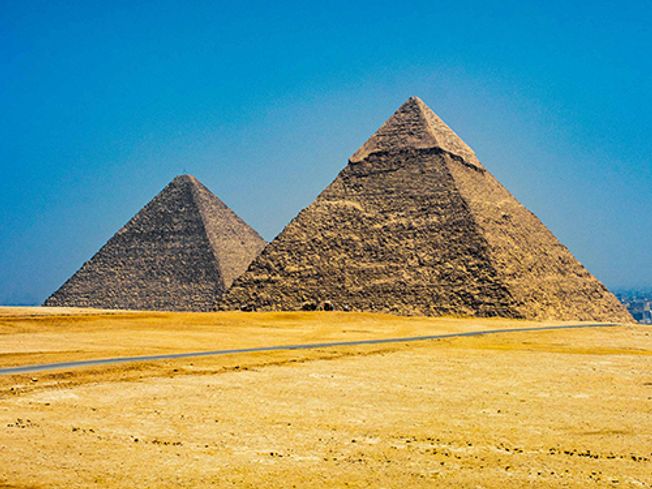 The author was a guest of Egypt Tourism Authority and Abercrombie & Kent (01242 547703) which has a four night trip to Cairo, including B&B at the Four Seasons Nile Plaza from £2,260pp, based on two people sharing.

The price from October onwards includes a tour of the Grand Egyptian Museum (opening October 2020) and visits to the pyramids of Giza, plus transfers and international flights.

More of the world's museums:

Where to immerse yourself in Oman's culture