Tomorrow is Snow Leopard Day! So, we're celebrating this elusive and endangered cat. With fewer than 10,000 left in the wild, action must be taken to protect this majestic mammal. Here are the facts... 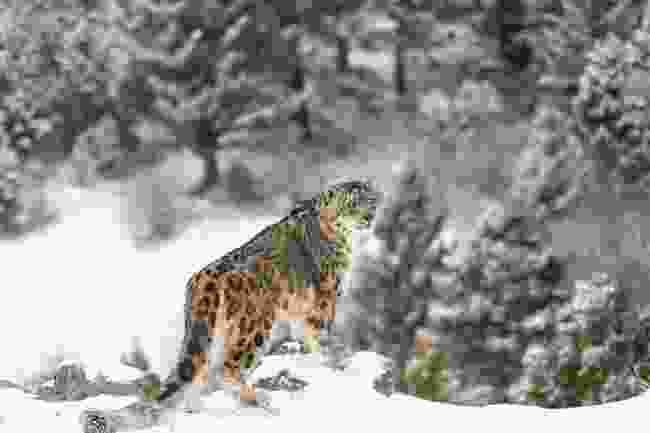 A snow leopard stands on a cliff edge (Shutterstock)

Native to the steep, rocky highlands of Central Asia, snow leopards have been found in 12 countries, including India, Pakistan and Mongolia.

China is thought to house the most snow leopards as its western, mountainous Himalayan region forms the perfect habitat for these majestic cats. In China, they typically live between 3,000m and 5,400m above sea level, however further north, in cooler climates like central Russia, they can live as low as 1,000 meters.

The species is endangered, however, and it’s increasingly difficult to see one in the wild – it also doesn’t help that they reside in inhospitable, jagged highlands that are challenging for humans to reach.

Your best bet at spotting one is in Hemis National Park in Ladakh, India. There are conservation efforts in Ladakh offering snow leopard treks, with the proceeds going towards protecting the animals.

Go towards the end of winter or beginning of spring. A large amount of snowfall and a scarceness of prey encourages the leopards to descend to the valley floor, which makes it a bit easier to spot them.

2. Their tails double up as scarves 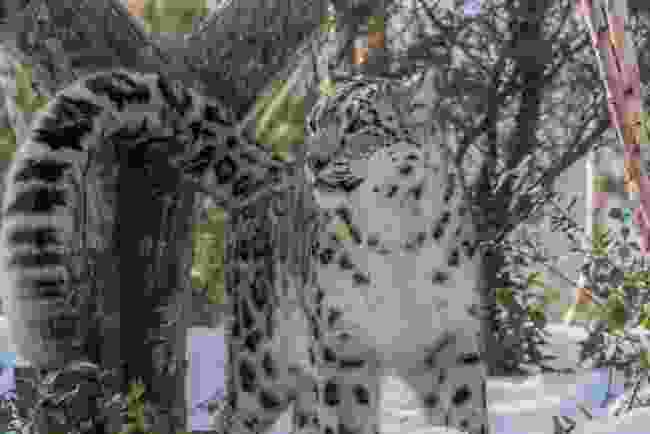 Snow leopards are perfectly adapted to their harsh environment, from the ears on their heads to their bushy tails.

Compared to their large cat cousins, snow leopards have small ears, flatter against the head, to minimise heat loss. They also have differently shaped skulls, allowing for larger nasal openings. This is so they can take in more air to ensure adequate amounts of oxygen at higher altitudes.

Their long tails are thick with stored fat and covered with dense fur. This assists with balance and allows them to be used as scarfs. The leopards use their tails to keep their faces warm while they sleep.

Snow leopards are often seen chewing their tails... Scientists aren't sure exactly why they do this, it's speculated that they're just playing. 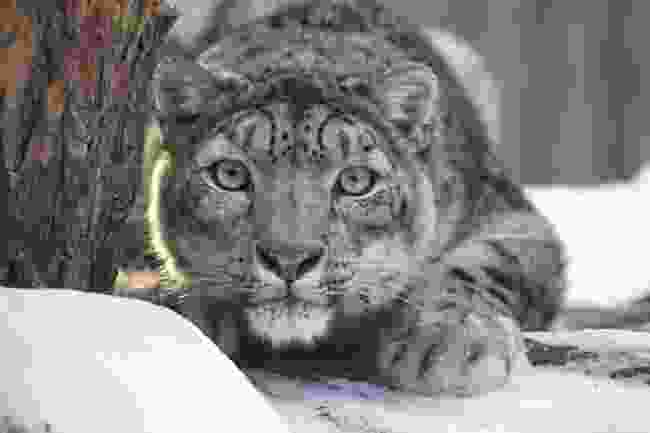 Snow leopards are actually more closely related to tigers than conventional leopards. The two large cats are members of the Panthera genus, and diverged from one another over two million years ago.

Lions, jaguars and leopards also belong to the Panthera genus, but share more similarities with each other than with tigers or snow leopards. 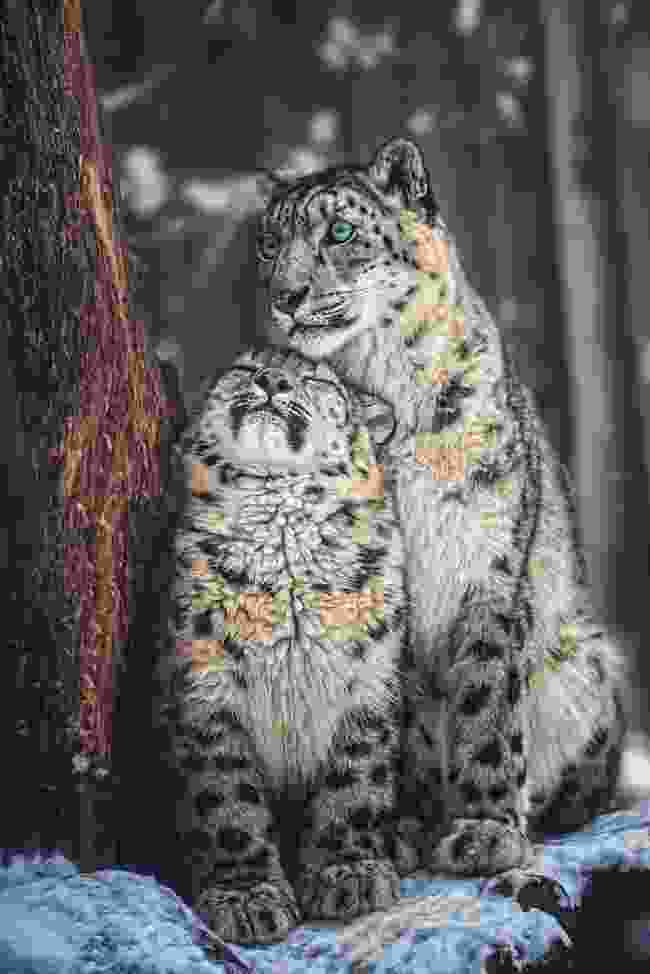 A snow leopardess with a cub (Shutterstock)

There are estimated to be between 4,500 and 7,000 snow leopards in the wild. Scientists disagree as to whether they are endangered or not. In either scenario, they are certainly vulnerable.

Many of the threats facing the species are not being tackled. Around 450 snow leopards are killed every year, some by poachers, but mostly by farmers protecting their livestock.

The leopard’s habitat is increasingly encroached upon to make space for farmland. As opportunistic predators, the leopards will eat livestock and are often killed by farmers protecting their herds.

On top of that, the Himalayas are experiencing warming at three times the global average, causing major disruption to the big cats' home.

5. They have bright blue eyes 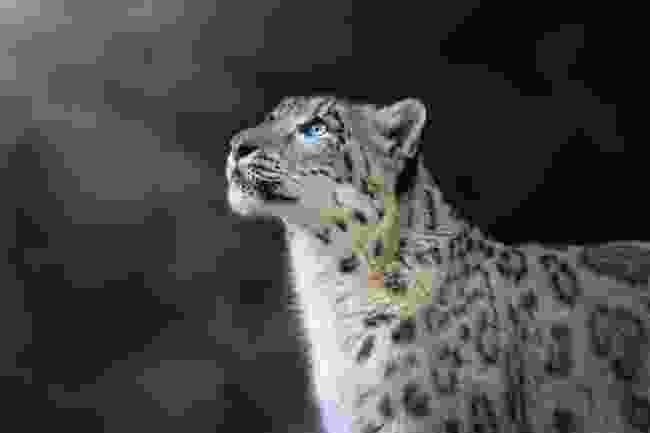 Unusually for large cats, snow leopards have blue, green or grey eyes, opposed to yellow or orange. Experts think that this may be to help them blend into their environment. 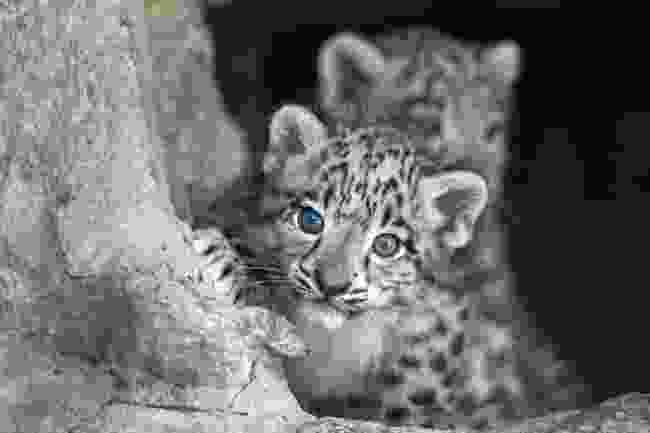 Snow leopards are many things. They can leap up to 50ft, they have large paws, allowing them to walk on thick snow, and they are well camouflaged. They cannot, however, roar...

Big cats have a particular ligament in their vocal cords. This ligament can stretch and flex, creating the powerful, deep roaring sound we all know and love.

While snow leopards possess this ligament, they lack a layer of fatty tissue, and so they cannot manipulate them to make a roar. Snow leopards' underdeveloped vocal cords resemble those of a house cat, so they can still hiss at you. 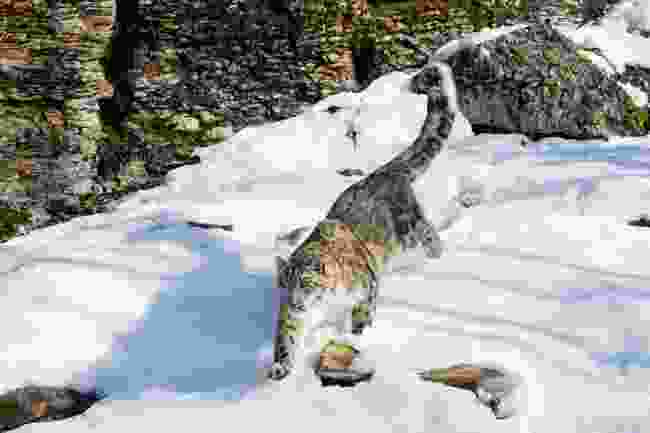 A snow leopard making its way down a hillside (Shutterstock)

Good news for wildlife photographers! The snow leopard is most active in the early mornings and evenings, during dusk and dawn. Just as the light is looking particularly gorgeous.

Many other familiar mammals share this behavioural pattern, including lions, ocelots and the American woodcock.

Interestingly, if snow leopards exist in a habitat close to humans, they will switch to nocturnal behaviour.