As Ukraine marks 30 years of independence from the Soviet Union with festivities on 24 August, we explore the multi-coloured churches, cathedral and quirky art in its capital, Kiev

Kiev is an unusual city. Vast and busy, but surprisingly quiet. A bit aloof. It feels a million miles away from other great capitals of Europe, and you won't see many visitors. Still, there’s a bit of a London Underground vibe when it comes to getting around on public transport.

Much of the country is religious, so the grand cathedrals and churches that brighten Kiev’s grey streets and squares are not just for travellers to gawk at (though they are undeniably gawk-worthy). The city is full of history too, including Ukraine's Soviet past and the recent present – Crimea has been annexed by Russia while parts of Eastern Ukraine, Donetsk and Luhansk, are sensitive along their borders.

Kiev has plenty of things to do and majestic landmarks to see. In fact, you could easily spend four or five days in city, and still find there’s more to explore. Here are the 11 best things to do while in Kiev, Ukraine… 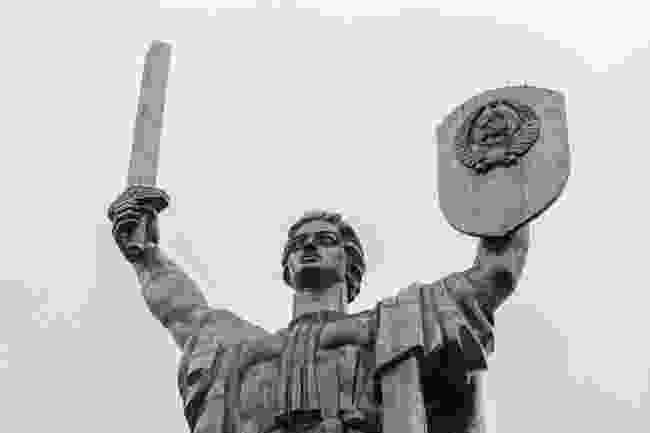 The Motherland Monument, also known as Rodina Mat Statue, is 102m tall and made from pure stainless steel. Her shield and sword are held high and proud, which, if you're lucky, you'll see glistening in the sun.

Oddly, you can climb inside her head and look out of her eyes, for a bit of extra cash – though this option isn’t always available.

You don’t really need to, though. The view from the ground in the park of the Museum of the History of Ukraine in the Second World War, where she stands, is impressive enough. You can see over the Dnieper river, a more residential area of the city.

The park also houses army tanks, planes, war memorials and several Soviet buildings – a must for anyone with an interest in Ukraine's Soviet Union past. 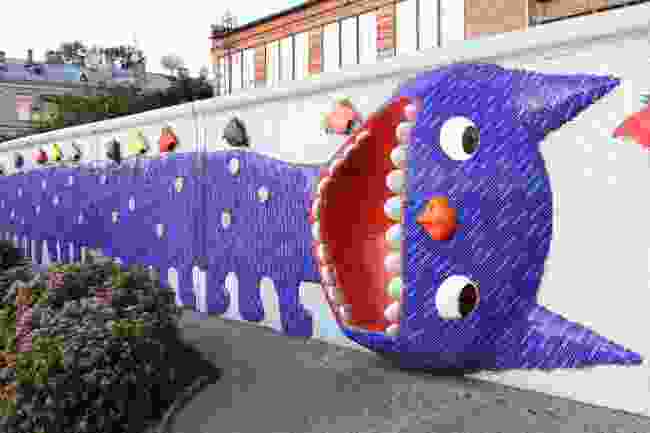 There are children’s parks along the way, but plenty for grown-up visitors to see, too. The big blue cats with open mouths along the walls of the park are particularly fun, and are wide enough to stand in for a memorable photograph.

If quirky is not really your thing, there are killer views from the nearby grassy area (a little obscured by trees, but still…), and a long maze-like staircase to take you further down into the city.

3. Wander down (not up) Andriyivskyy Descent 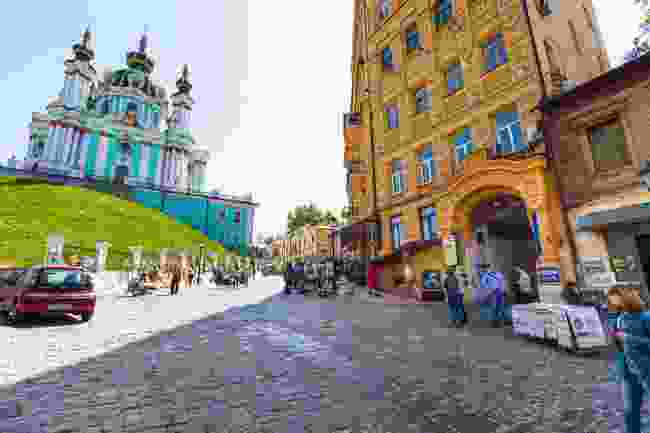 Close to Pejzazna Alley is the Andriyivskyy Descent, a hill known for its arty shops, flea markets, occasional bursts of street art and St Andrew, a stunning turquoise church.

For an experienced hiker, this hill won’t present much of a challenge. For a traveller better accustomed to flat ground, you’ll definitely want to walk down the Descent, and not up it. 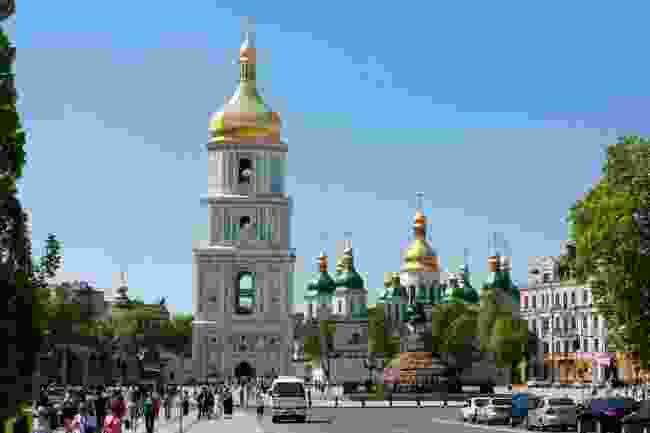 St Sophia's is a majestic cathedral and bell tower, built in the 11th century, and rightfully placed on the list of UNESCO World Heritage Sites.

It’s worth the reasonable entry price alone just to get away from trekking through the city for a few minutes, to sit and enjoy the peaceful cathedral gardens.

It's especially stunning during sunnier moments and in autumn, when the grounds fill with red, yellow and orange leaves. 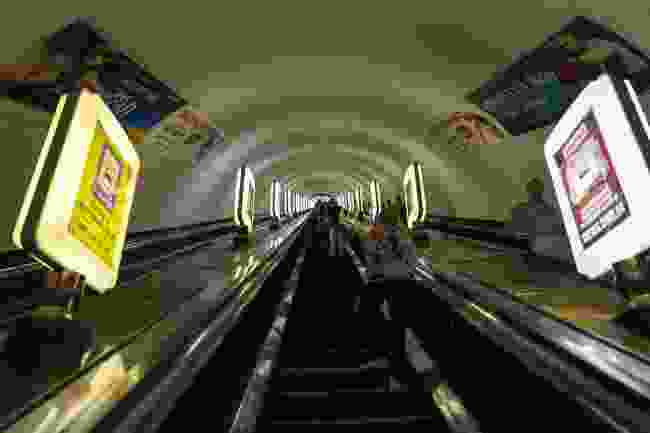 Deep down the deepest rabbit hole in the world, aka Arsenalna Metro, Kiev (Dreamstime)

Many of Kiev’s metros (which are incredibly cheap, and the easiest way to get around) have long, long, long descents to take you to the platform.

They’re all noteworthy, but Arsenalna is the world's deepest metro station. Fortunately, it’s fairly central – so you may well see it by accident while you’re exploring Kiev. 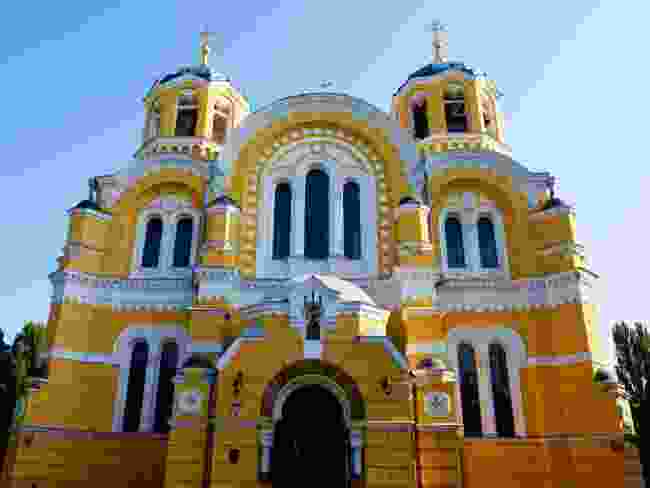 St Volodymyr’s cathedral is an unmissable yellow among grey surroundings. When the bells are ringing, and a service is underway, remember to be respectful as you’re exploring the grounds or taking photos.

Note that it's a little out of the way, by Teatralna metro station, but it's worth making the effort to visit. 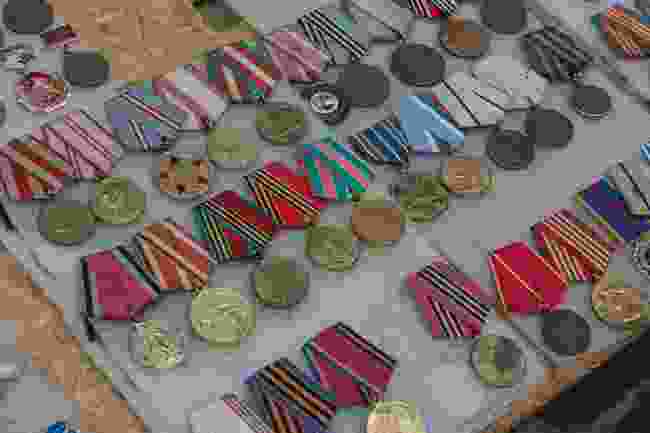 If you’re looking to go beyond the city’s tick list of cathedrals and monuments, head further out towards Obolon metro station, where you'll find a not-so-noteworthy retail district with petrol stations, supermarkets and a mall.

That's during weekdays. On weekends, you'll find market stalls filled with books, magazines and other gems – plus a flea market that stretches across a road, selling everything from knick knacks and clothes to Soviet memorabilia. 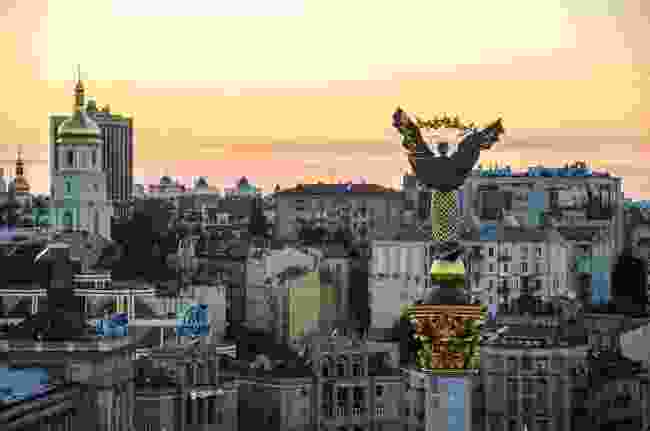 A view of Independence Square, Kiev, Ukraine, from a height (Dreamstime)

Sometimes referred to as Maidan, Independence Square is Kiev's main square, located on its main shopping street. It was given its name in 1991, to celebrate Ukraine's independence from the Soviet Union in August of the same year.

Independence Square is a lively centre point for the city, and where you're most likely to see other visitors. There have also been many political protests here.

For travellers, there are several monuments to see, including statues of Kiev's founders. 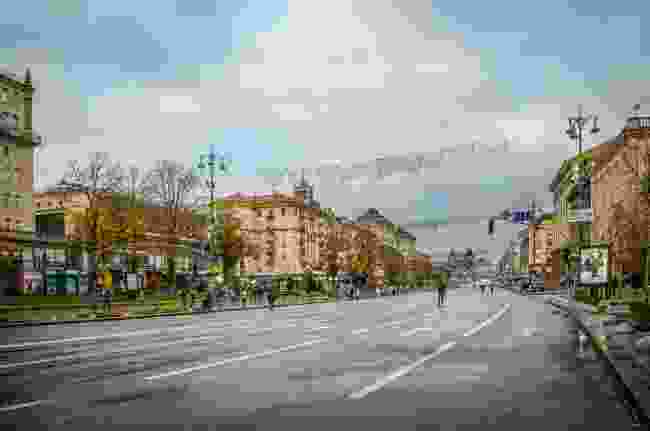 Khreschatyk in the rain, Kiev (Dreamstime)

Shopping probably won’t be the first thing on your mind while visiting Kiev. But Khreschatyk is Kiev’s equivalent to London's Oxford Street, and you'll already be there if you go to Independence Square. So it's definitely worth a peek.

Expect some familiar shop names and cheap-and-easy places to eat that locals frequent: Puzata Hata, a buffet-style restaurant, and the popular hot dog stand Kyivska Perepichka. The further you walk, you may even come across more market-style stands and the locals’ food market, on certain days.

One downside of Khreschatyk, however, is the possibility that men on the street may encourage you to take photos with animals, birds of prey or even monkeys. Keep your head down to avoid encouraging them, as they’re a bit pushy. 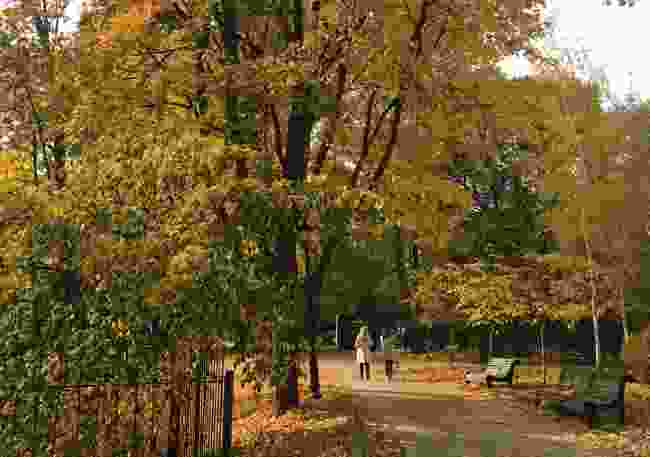 There are several lovely statues to admire, and benches to sit on and watch the world go by. On the bridge floor, there are messages about love in many languages. An ideal place for couples travelling together.

Follow Mariinsky Park through and you’ll find your way back to Independence Square, but not before coming across the magnificent Arch of Diversity, and spotting the golden Kiev Elephant near another – and in our opinion, one of the loveliest – views over the city. 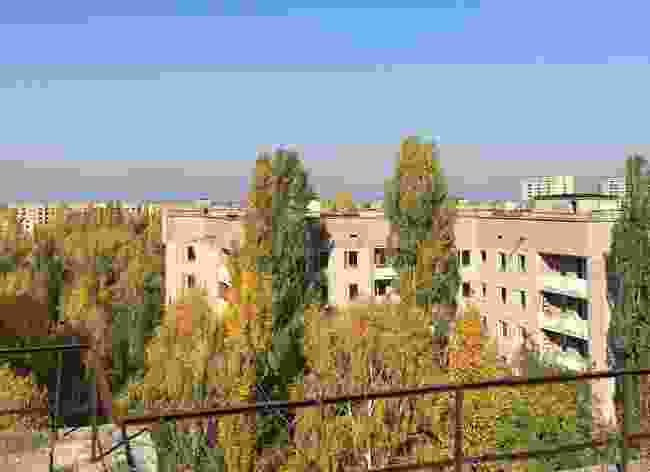 An obvious one, but if you have a few days in Kiev then this day tour, about two hours away from the city via bus, is a must-do. Wake up early and gear yourself up for some walking.

The impact of the Chernobyl nuclear explosion in 1986 was catastrophic, and there’s a lot of abandoned ground in the exclusion zone to cover.

You'll need an organised tour to take you beyond the barriers, but most tours will follow the same stops. You'll be taken into the town of Chernobyl – where surprisingly, a fair few people still live and work.

You’ll eat there, then visit Pripyat, parts of which are still incredibly high radiation zones. You’ll also visit the nuclear plant, which is still in use today. If you like, you can stay in a Chernobyl hotel overnight.

Things you must do in Riga, Latvia