The capital of Latvia is undeniably a Baltic beauty, but its more than just its good looks. Find out what to see, do, eat and drink while you're in Riga...

1. Get your ‘gram at Three Brothers 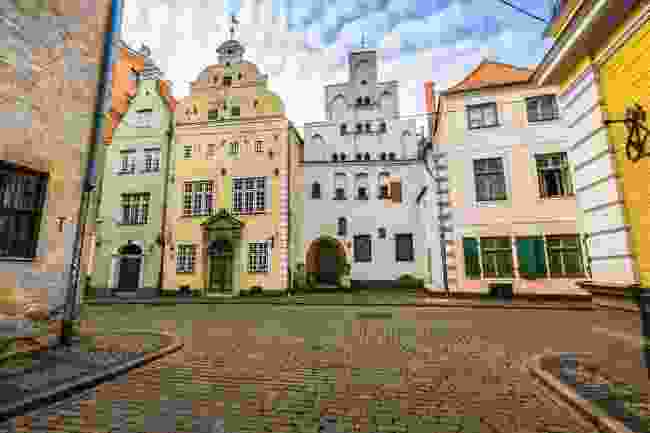 The Three Brothers are the oldest buildings in Riga, left (Dreamstime)

Each was built in a different time period (from left to right: 1400s, early 1600s and late 1600s) and has come to represent different eras of architecture and design.

Finding them is part of the fun. You'll be surrounded by beautiful buildings as you work your way towards the Brothers.

2. See the Laima clock (and eat some chocolate) 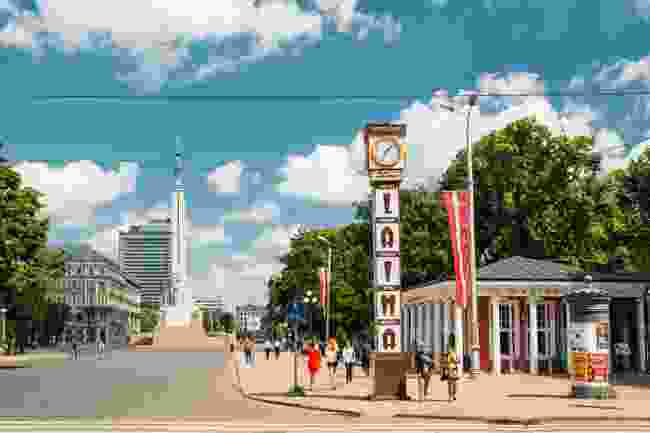 Riga's famous Laima clock, near a couple of the company's chocolate shops, of course (Dreamstime)

Laima is Latvia’s native chocolate company, and its iconic clock has been standing near Riga’s Freedom Monument since around 1924.

You’ll likely pass this landmark during your visit, rather than seeking it out – but do definitely make an effort to visit one of the city’s many Laima-dedicated shops. The chocolate is super cheap and delicious.

3. Feel moved by the Freedom Monument 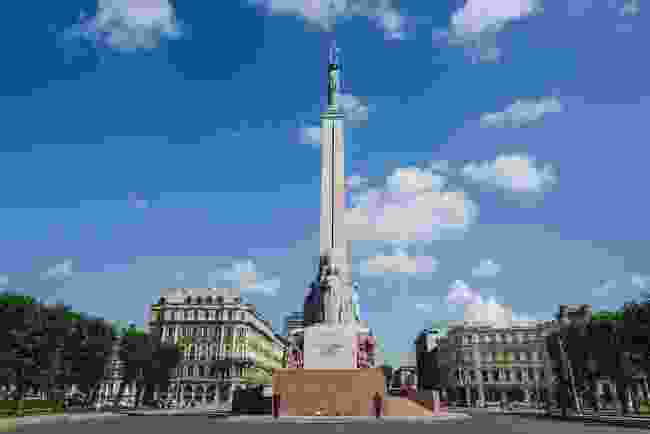 The Freedom Monument was built in 1935, to commemorate the soldiers who died fighting in the Latvian War of Independence between 1918 and 1920. The woman, Milda, holds above her head three stars, representing the three historic regions that make up the country. Close by to most central sites, you'll find it difficult to miss. 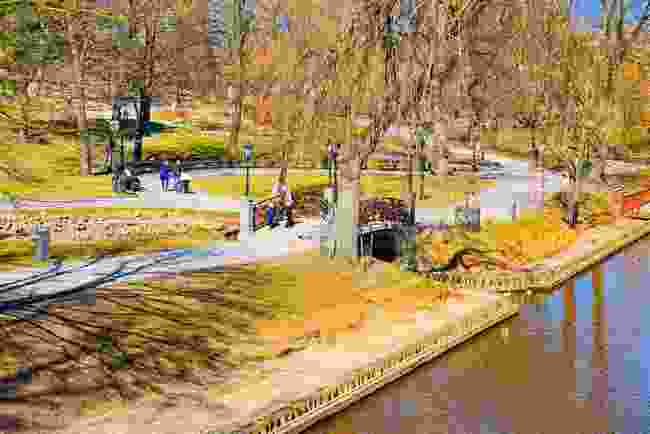 Near the Freedom Monument is Bastejkalna Park, one of Riga's many beautiful outdoor spaces (Dreamstime)

Close by to the Freedom Monument you'll find Bastejkalna, one of Riga's loveliest parks, with a peaceful canal running through it. Expect winding pavements, tiny bridges, blooming flowers when the season's right and plenty of benches.

Behave respectfully when you're in a public park in Latvia. There's no smoking allowed in public parks, and if you get caught, you will get in trouble! 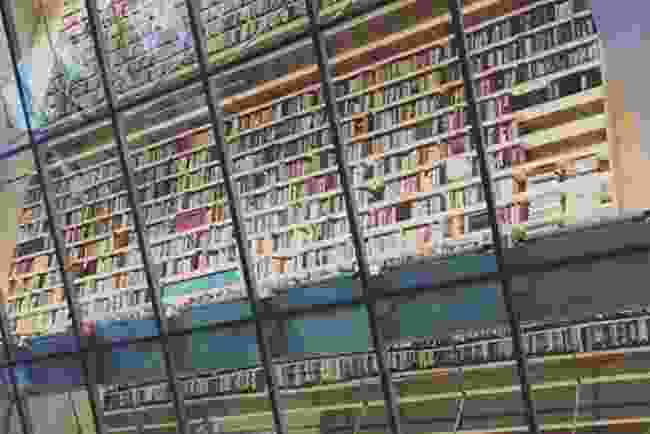 We wouldn't recommend spending lots of time in Latvijas Nacionālā Bibliotēka, but it's still worth a visit. A walk from the Old Town over the River Daugava, you'll immediately be struck by the steely and impressive modern exterior, designed by architect Gunnar Birkerts.

Inside, live a novel-lover's dream and admire a display of books, the height of several floors. Books are donated by library visitors. Dotted around the library are various photo exhibits and art installations. Opt for a tour if you don't fancy walking around solo. 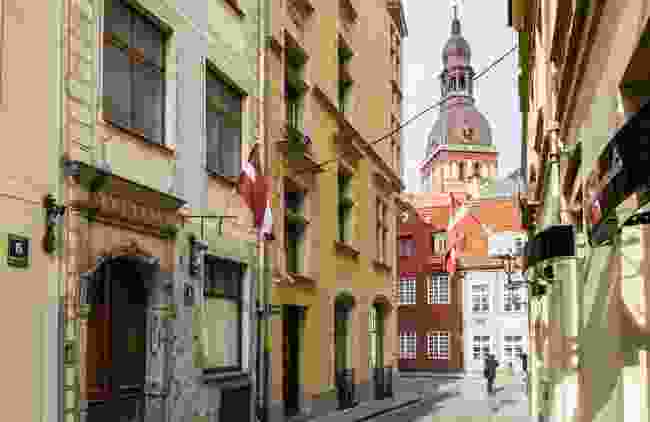 A snap of Riga's Old Town during spring (Dreamstime)

Riga's Old Town needs no explanation. Every corner, every lane, reveals a fascinating insight into the city's long, intriguing history.

If you're hungry, we'd suggest that the Old Town is a great place to eat, too. Every little café and bar has something new to offer, and it's easy to see where the locals like to eat - especially when everyone's eating outdoors during the warmer months.

7. Marvel at the art nouveau district 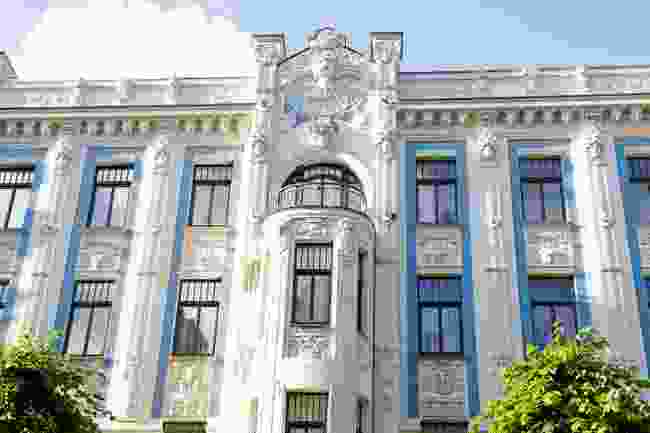 You're never too far from art nouveau while in Riga, but Alberta Iela is the street you're looking for if design and architecture is your thing. It's also home to Riga's Art Nouveau Museum. Located in the apartment where Latvian architect Konstantīns Pēkšēns lived, it features one of the most impressive Art Nouveau staircase in Europe.

8. Soak up the view from St Peter’s Church 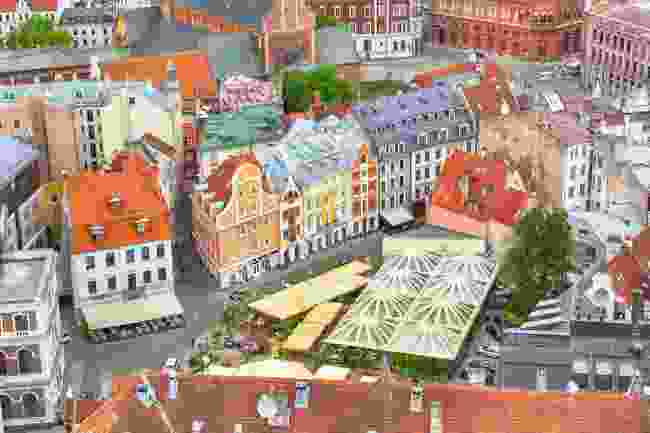 An aerial view of Dom's Square in Riga, Latvia (Dreamstime)

St Peter's Church is probably best known for its views of the city, given that its over 123 metres tall, and perfectly placed to provide a bird's eye view of the Old Town's reds, yellows, and oranges.

The tower itself has had a bit of a tricky past. First built in the 1400s, it collapsed in 1666, and was destroyed by lightning in 1721 shortly after it was rebuilt. It was then burned down during WWII. It was finally rebuilt in the 1970s.

Once inside, as well as admiring the interior, you might be lucky enough to see local art on display in the church itself.

9. Go inside the House of The Blackheads 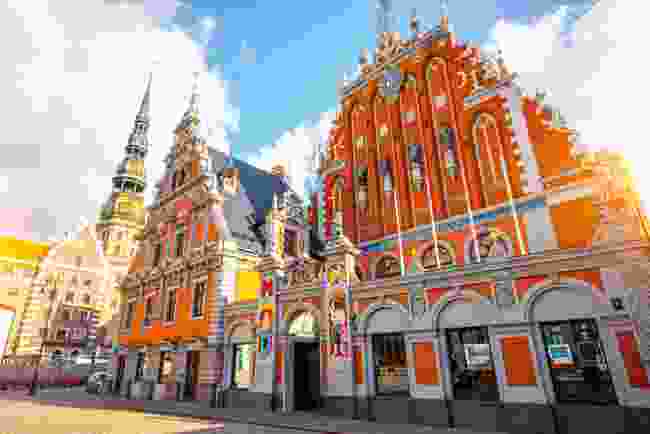 The House of The Blackheads, Riga, Latvia (Dreamstime)

The House of The Blackheads is probably the iconic image of Riga. For good reason, too. Fully rebuilt in 1999 after damage from WWII, the former location for many of Riga's important meetings is back in business.

A tour will show you ornate chandeliers, grand portraits, underneath the house itself, and guide you through the building's long history. You're just as well to wander around without a tour, though. 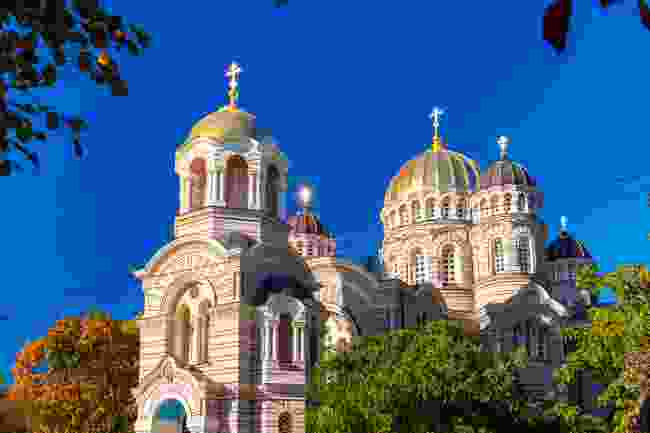 A sky view of the Nativity Cathedral in Riga, Latvia

The Nativity of Christ Cathedral is an Russian Orthodox church built in the late 1800s, notable for it's Neo-Byzantine design. Apparently once transformed into a planetarium, it's now back to being used for its original purpose.

Obviously, it's stunning to look at on the outside. Equally, on the inside, which you can view for a small entrance fee. Do be respectful if you go indoors, and definitely don't take pics inside the church. Keep your dress fairly modest, and women may be asked to cover their heads.

It shouldn’t be hard to get your hands on Riga’s dark, acquired-taste rye bread (rujpmaize) while you’re in the city. It'll be served in many restaurants, and available in supermarkets.

12. Drink (if you dare) some Black Balsam 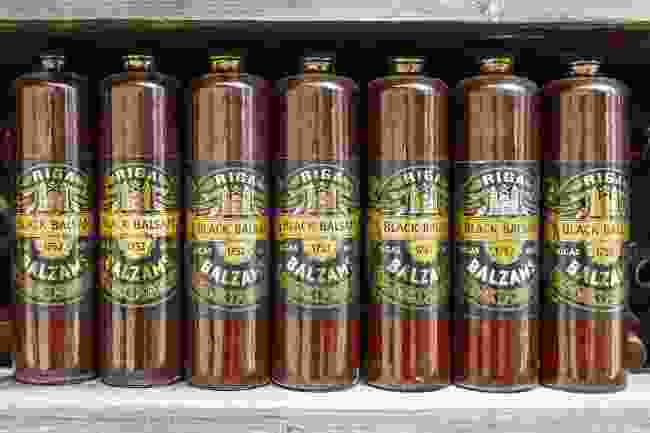 Riga's Black Balsam is an herbal liquor used for shots, tea, and even medicine (Shutterstock)

An herbal liquor native to Riga, Black Balsam is used by locals in everything from medicinal drinks to cure colds to cups of tea, and yes, also in alcoholic drinks. It’s 100s of years old, and made with countless herbs, including ginger, valerian… and even a bit of geranium.

Each brand and recipe will probably differ slightly, but you can always expect a bitter(sweet?) taste. If you’re feeling brave, give it a go – in just about any bar.

13. Venture to the Venta Rapid 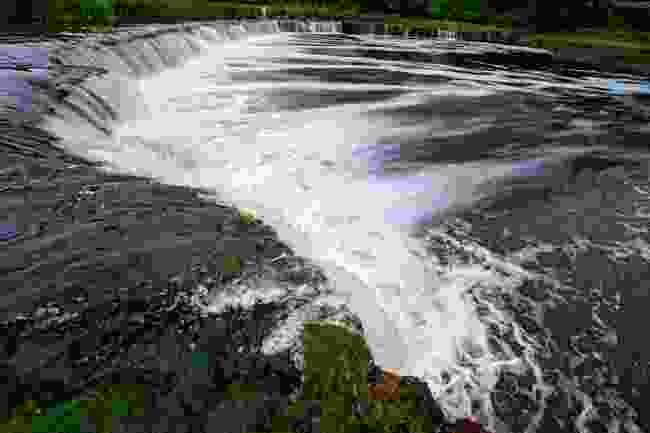 It's a bit of a trek from Riga – just under three hours by bus – but if you have an extra day in Riga (or Latvia, in general), the Venta Rapid is definitely worth the trouble.

It's the widest waterfall in Europe, at around 200m to 250m wide, located in Kuldīga's Old Town. In spring and autumn, if you're lucky, you may just see flying fish doing their best to jump over it.

More things to do in Europe: