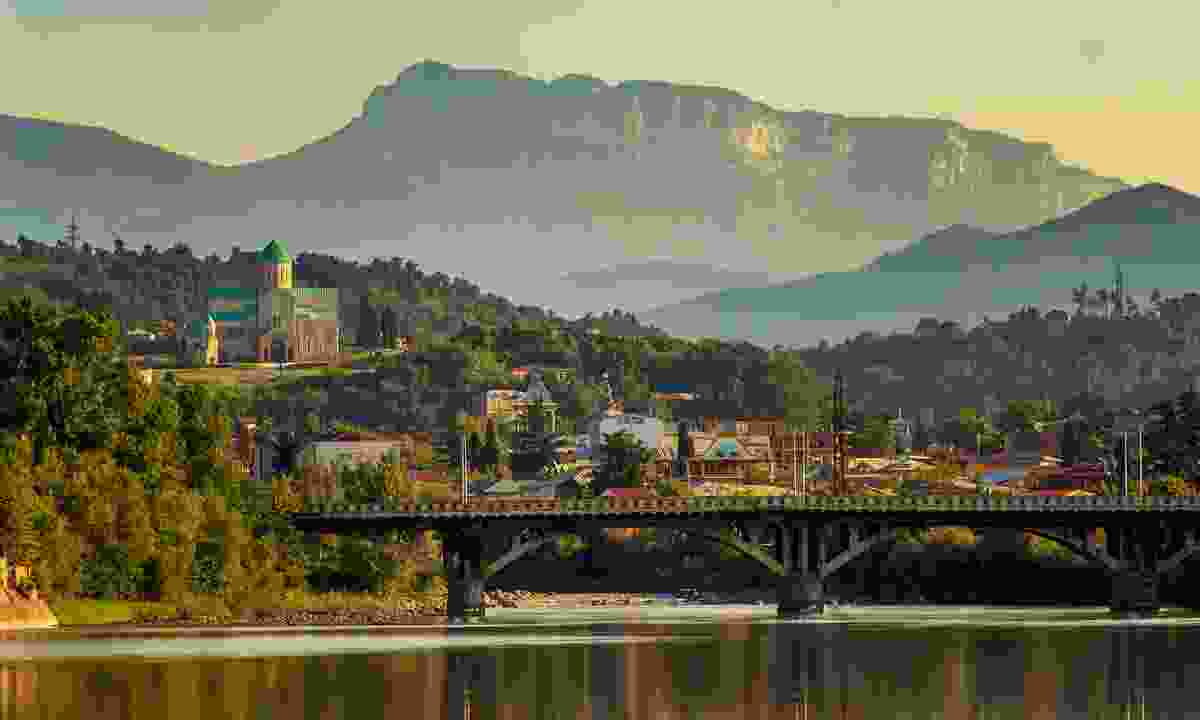 Just half an hour from the airport, laidback Kutaisi is a good base for exploring western Georgia. Its ramshackle streets and historic buildings are softened by lush vegetation and the milky Rioni River.

Contemporary Best Western Hotel is conveniently situated next to the White Bridge, a focal point in the city’s heart. Nearby the charming antiquated cable car soars above the valley. Across the hilltop from the top station, the medieval Bagrati Cathedral is a curious mix of ancient stone and contemporary glass and metal.

Gelati Monastery, just north of the city, has safeguarded its UNESCO World Heritage status, unlike Bagrati, with careful restoration. Its pièce de résistance is the magnificent Cathedral of the Virgin filled with colourful frescos.

In the nearby village of Sormoni, a hillside house runs a restaurant of the same name, offering simple but tasty Georgian fare in tabled bamboo huts, while in town shabby-chic Palaty and Sapere serve up mouth-watering dishes in relaxed surroundings.

2. Lose yourself in the abandoned spas of Tskaltubo 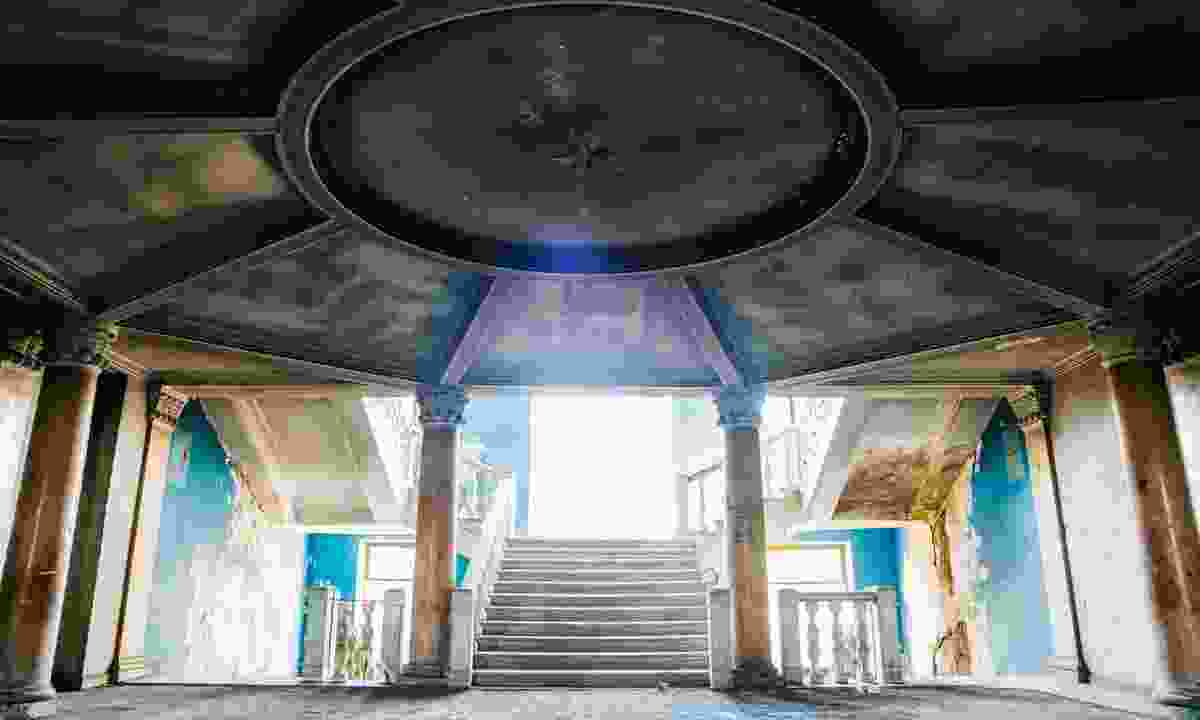 The decaying beauty of these opulent spas, now returning to nature, are made all the more poignant by the presence of the displaced Abkhazian Georgians who occupy rooms in the half-ruins. Tskaltubo is a photographer’s dream.

Bathhouse Six, built for Stalin, has been fully restored. You can take to the healing waters, enjoy a massage or mud bath, while the restored Tskaltubo Spa Resort hotel (once a spa retreat for Soviet sailors) still oozes Soviet-era atmosphere with its sprawling grandeur and classical Stalinist and ethnic Georgian architecture. 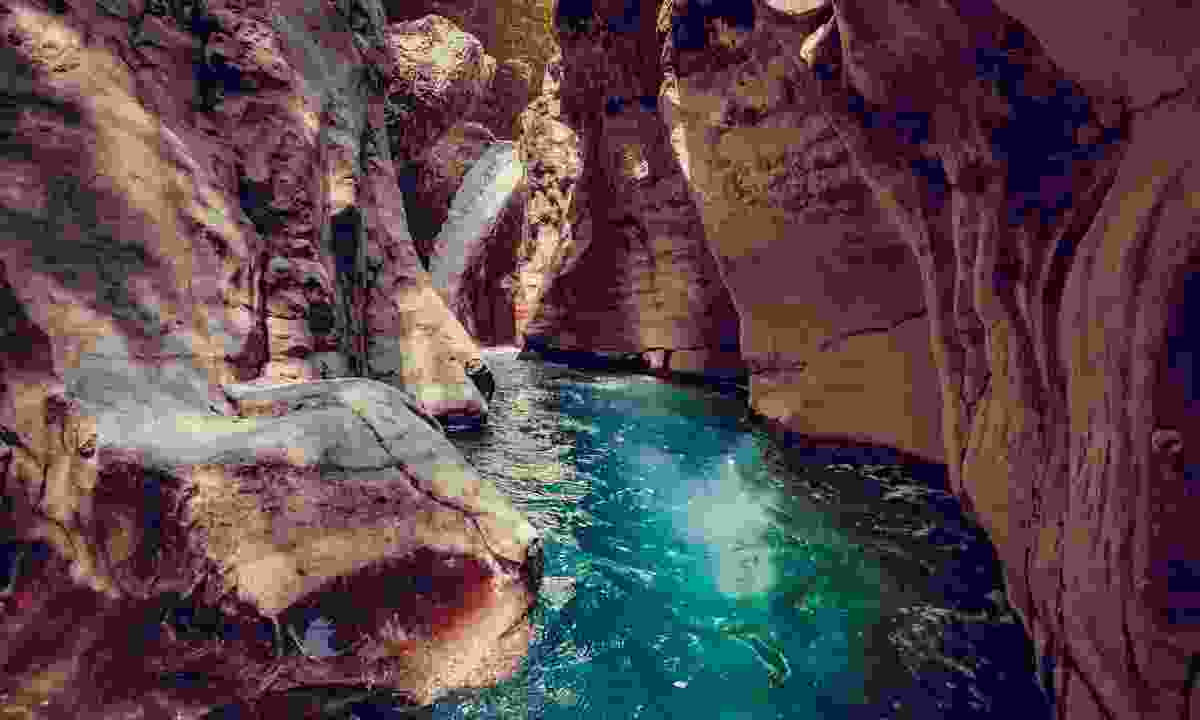 Just north of Tskaltubo you’ll find Prometheus Cave. The guided tour takes you through a series of karst caves, each hall of stalagmites and stalactites more spectacular than the one preceding it.

Having worked up an appetite in the caverns, head for nearby Tsivi Lake for lunch. The contemporary glass fronted Restaurant Lake Side serves up good food on the water’s edge.

Further northwest, Martvili Canyon offers more adventures. Below the trail, the ravine cliffs plunge to waterfalls and pools of clear water. Don’t miss the chance to canoe through the canyon’s turquoise waters in one of the manned inflatable boats.

Before leaving Martvili, visit Oda Family Winery. The welcome is genuine, the food divine, as are the organic wines served on a shaded terrace in this idyllic spot. Off the tourist track, the roads in subtropical Guria weave through densely forested hills and valleys - reminiscent of Thailand or Sri Lanka - past walnut and fruit orchards as well as tea plantations.

Cows and pigs wander on to the road. Diminutive Orthodox churches sit on roadsides or perch on hilltops. Join a tour on the Tea Road and find out how the organic teas are produced.

For a slice of authentic Georgian life, stay On Top Of Red Mountain with views to Gomi Mountain in the Lesser Caucasus. Guests are invited to explore the small vineyard, tea and bamboo plantations.

Join three generations of Gurian women for a night of storytelling, toasting and the finest Georgian food prepared with fresh ingredients from their garden. The hosts also offer cookery masterclasses, tea tours and regional trips with driver and guide.

Gomi Mountain is a strange and otherworldly place above the clouds. Locals decamp to the mountain in summer to escape the humid heat.

The quaint, cobbled-together metal and wood self-builds sit on the skyline above a yellow carpet of perfumed azalea. It’s a magical place, well worth the hour-long drive up the rough but spectacular mountain road.

5. Dip your toes in the Black Sea 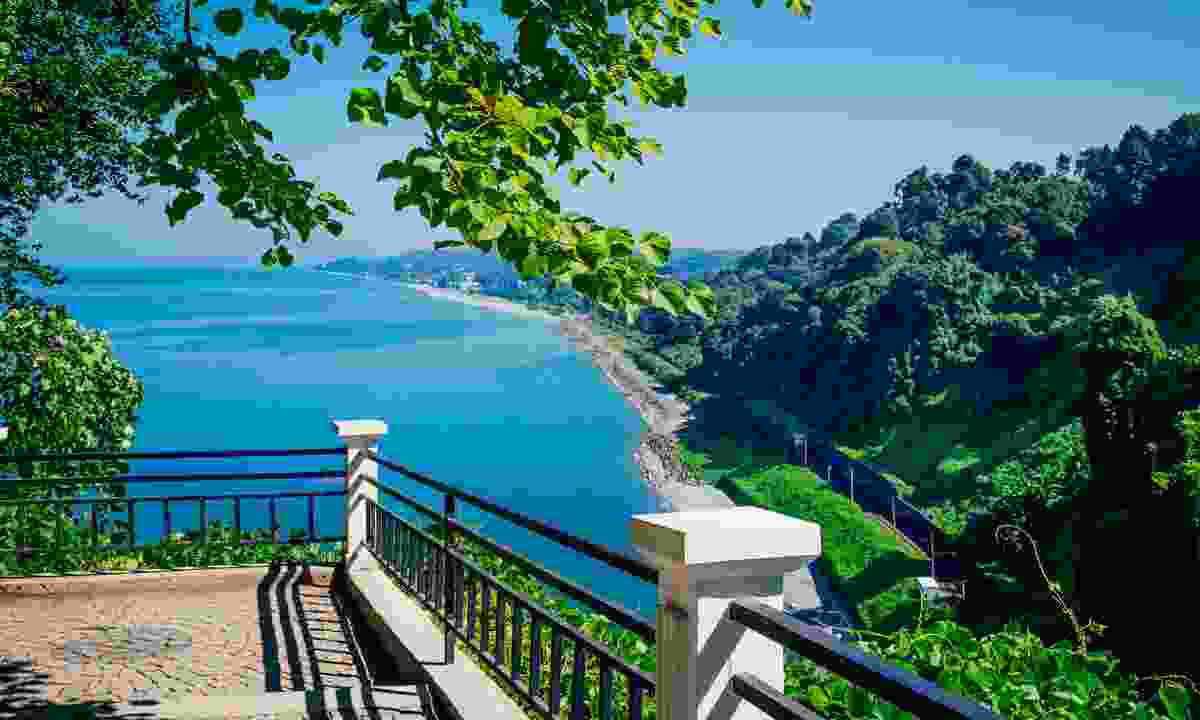 A trip to Western Georgia is incomplete without a visit to the Black Sea. Leaving from Ozurgeti, stop off at Tsvermaghala Park, the indulgent project of one of Georgia’s best-known billionaires who uprooted and replanted some of Georgia’s oldest and tallest trees here.

It’s a fine spot for al fresco dining with upmarket picnic tables beside a lily pond. Climb the steps above the park for views of the coast.

At the Black Sea Arena, Musician’s Park streams music beside statues of Georgian composers and folk musicians, as well as some of the world’s most famous pop artists.

Just down the road, you’ll find models of Georgia’s greatest landmarks in the Miniature Park. Guria isn’t known for its fine beaches, but there is something about standing on Shekvetili’s dark sands gazing across the great ocean of blue – not black - water, where west meets east.

For shopping and nightlife, head for the bright lights of Batumi.

6. Discover the wild spirit of Svaneti 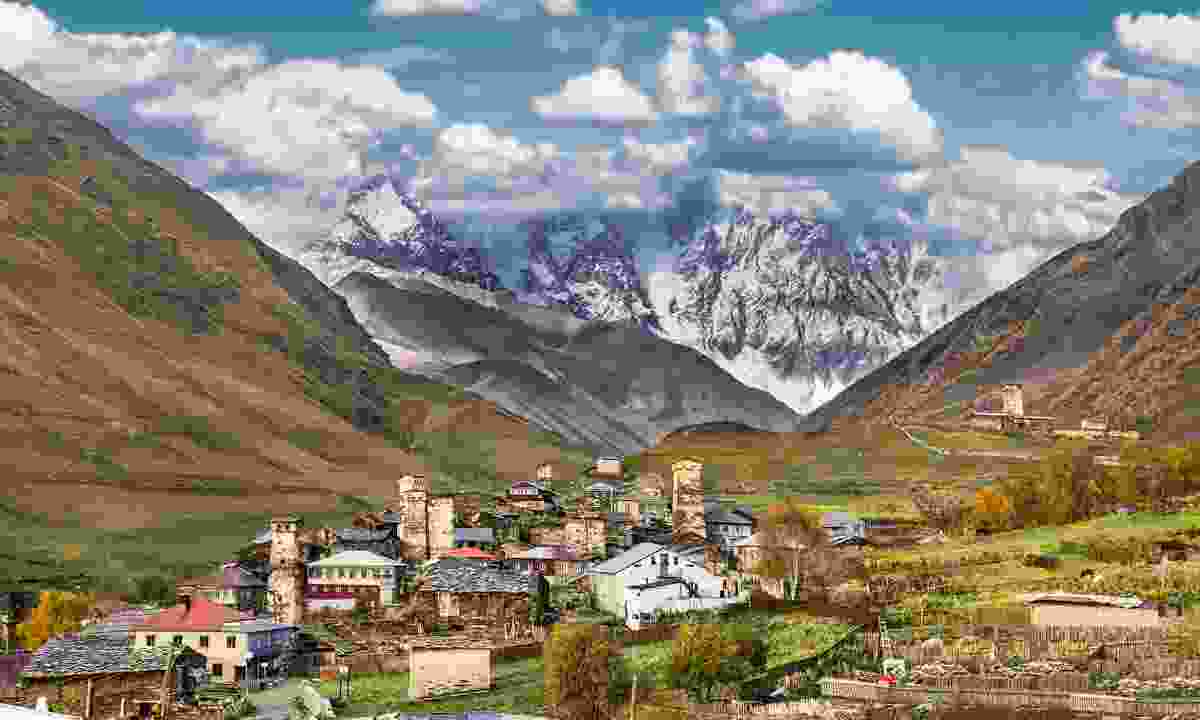 Break the long journey to Mestia with lunch at the refurbished Restaurant Diaroni in Zugdidi, and at Enguri Dam, site of the world’s second highest arch dam.

From here, the road hugs the Enguri River through ever wilder landscapes, the bright snow-covered mountains of the Greater Caucasus looming closer. Soon the first tower houses appear. The fierce Svans warded off foreign invaders, safeguarding Georgia’s treasures as the excellent Svaneti Museum of History and Ethnography testifies.

For the best views of Mestia book Banguriani Hotel. For great food, music and dancing, head for Café Laila in town. Take time to hike up to Chalaadi Glacier through pine forests and wildflower meadows.

The torturous journey to Ushguli is worth every bone-jarring bump of the unmade road that teeters above the Enguri ravine before it climbs the pass to one of Europe’s highest and most isolated villages.

With its simple stone dwellings, tower houses and mud tracks, Ushguli feels like it belongs to a distant past. Walk up to Lamaria, one of the oldest monasteries in Georgia, and drink in the views of the Georgia’s highest mountain, Shkhara.

7. Be amazed by Georgian food, wine and hospitality 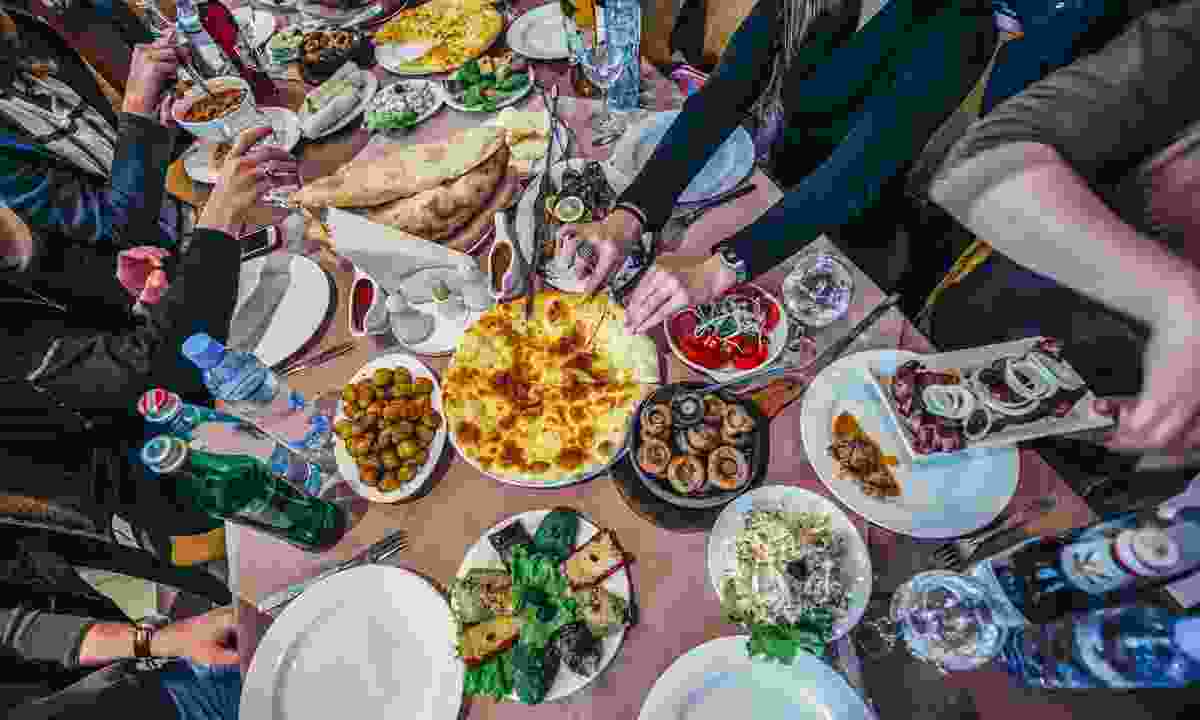 Georgia is known for its big-hearted hospitality, ancient wines and delicious food.

Khachapuri bread of cheese and crushed egg yolks, and kharcho soup with caramelised meat in walnut sauce are both essential tasting.

Lobio kotanshi - beans served in a clay pot, with dumplings - should be eaten Georgian style: bitten open, the juices tipped into the mouth before savouring the filling.

The author travelled with Travel the Unknown on the 12-day Georgia Explorer tour from £1,945. Find other tours here