The world’s 10 most awesome giant Buddhas

Immense in both scale and beauty, these paeans to the Buddhist faith make quite the impression, whether you’re a believer or not

1. The Great Buddhas of Monywa, Myanmar 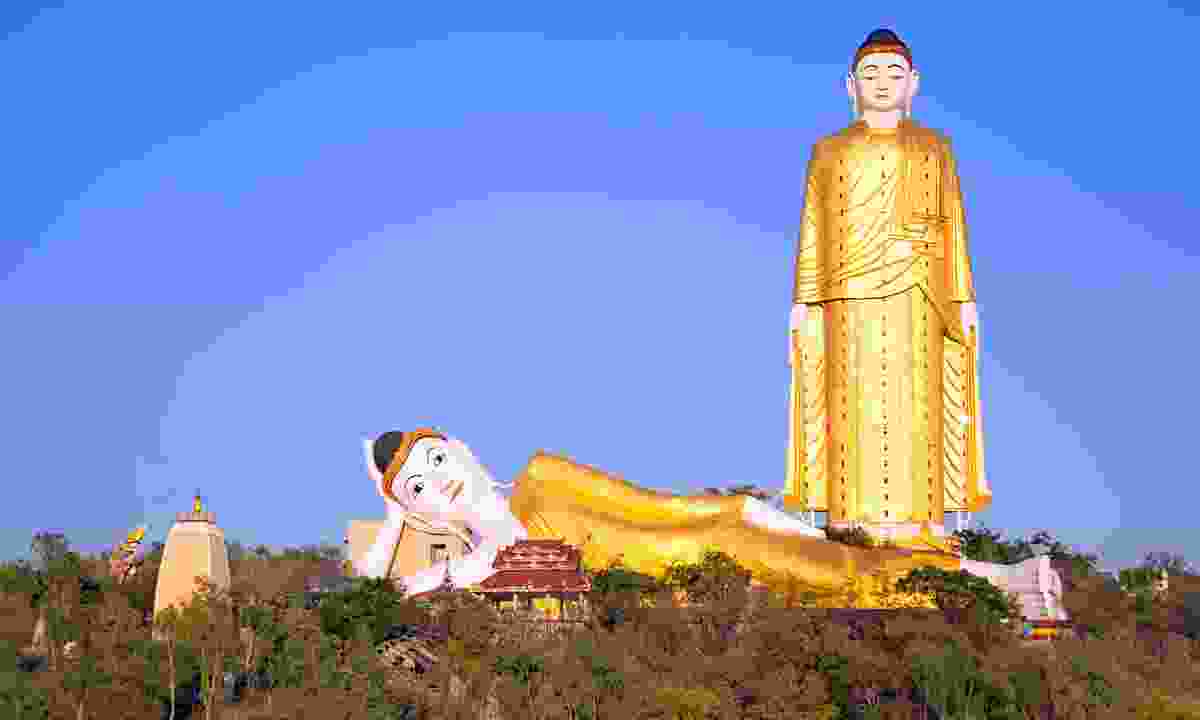 The Great Buddhas of Monywa (Dreamstime)

Visitors to Monywa, 138 kilometres northwest of Mandalay, will be treated to not one, but two giant Buddhas – one standing, one lying down.

At 90 metres long, the one lying down is the largest reclining Buddha in the world. It houses a collection of 9,000 etchings illustrating Buddha’s life that can be viewed by entering through a door in the statue’s backside.

The standing Buddha directly behind is 116 metres tall and is known as Laykyun Setkyar. 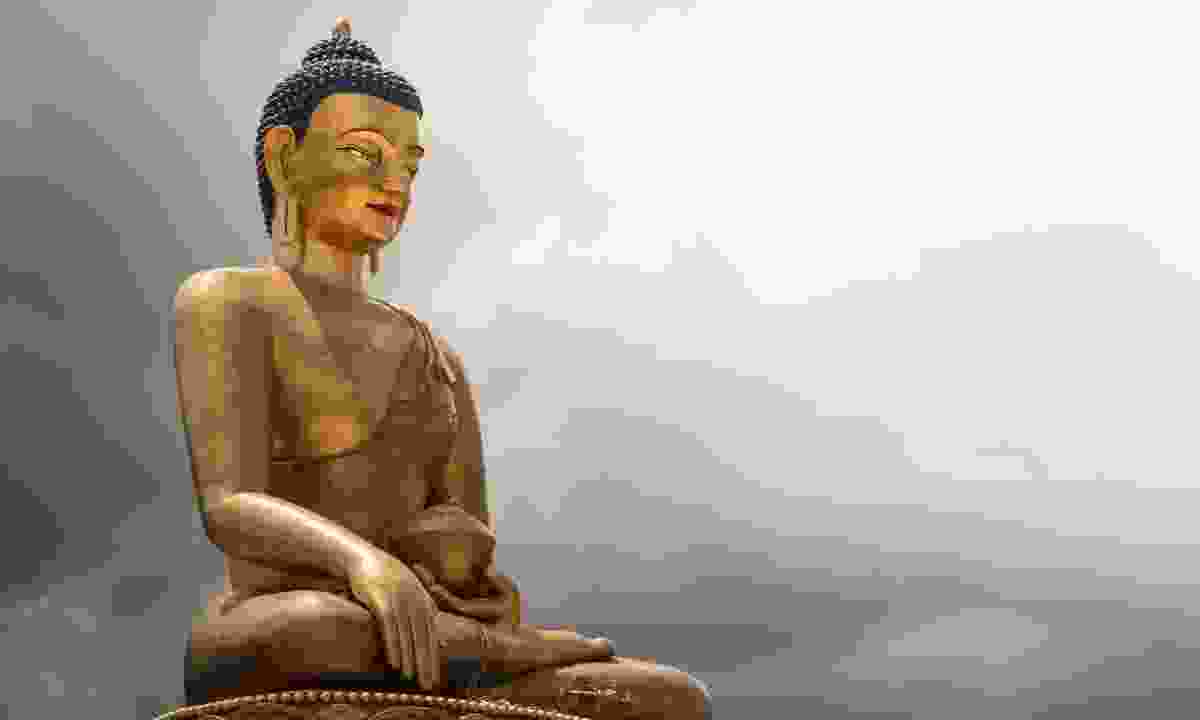 Made of bronze and gilded with gold, the Buddha Dordenma sits atop a hill in Kuenselphodrang Nature Park, overlooking the Southern entrance to Thimphu Valley in Bhutan. It was built to fulfil an ancient prophecy that stated that once a statue was built on this site, an aura of peace and happiness would spread across the entire world.

That hasn’t quite happened yet, but in the meantime, you can check out the 120,000 smaller Buddhas enshrined inside it. 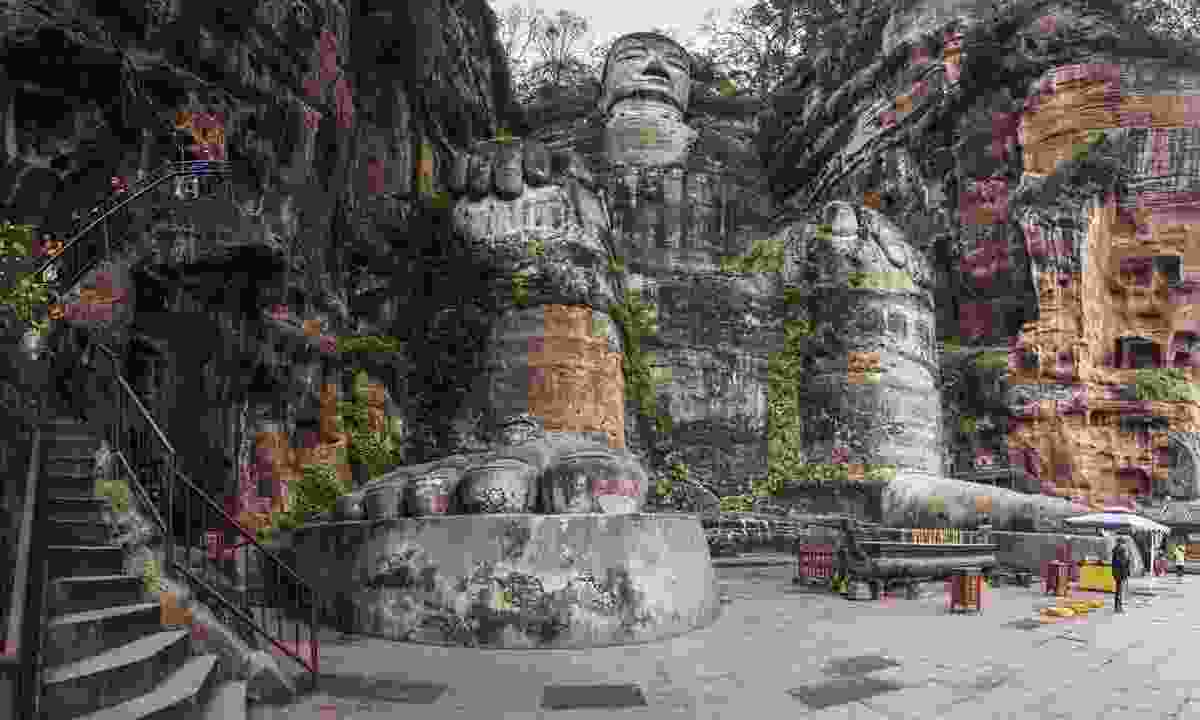 The Giant Buddha of Leshan (Dreamstime)

Gazing serenely over the confluence of the Minjiang, Dadu and Qingyi rivers in Sichuan province, the Giant Buddha of Leshan is one of the most popular tourist spots in China.

Carved on the side of a cliff in 713BC, the statue was the idea of a monk called Haithong, who hoped the statue would guide shipping vessels through the rivers’ treacherous currents. Sadly, he ran out of funds and the statue wasn't completed until 90 years later. 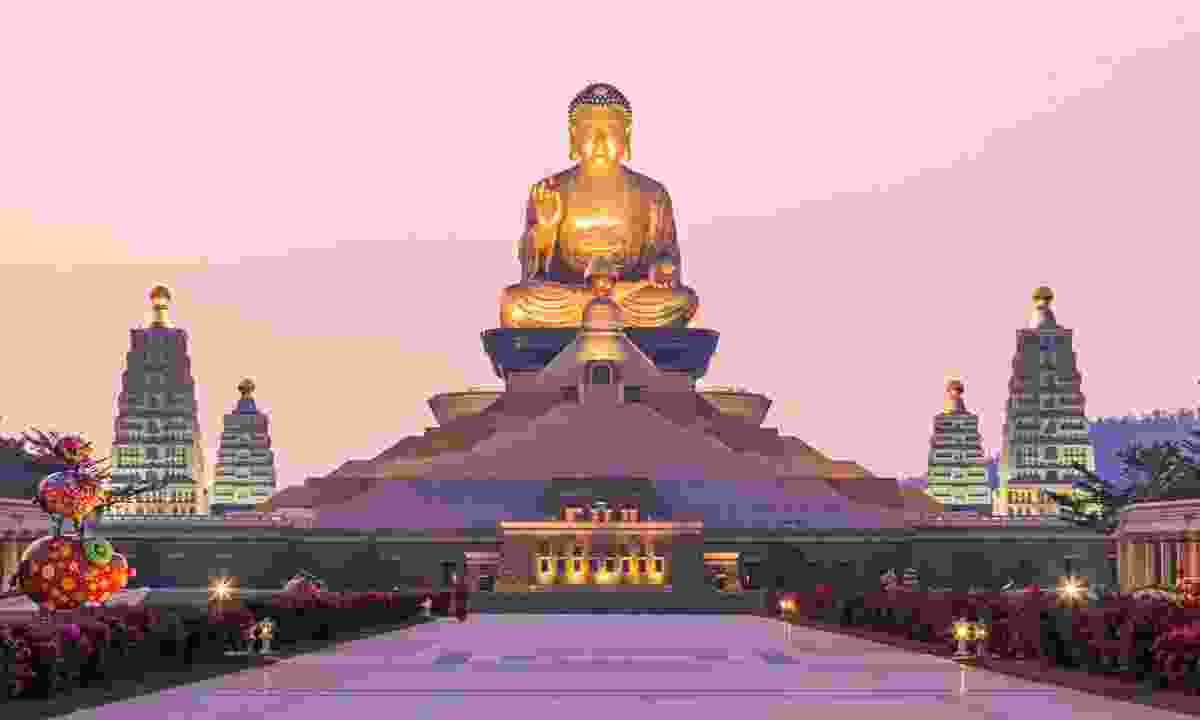 Located in Ta Shu of Kaohsiung City, Fo Guan Shan Monastery is the biggest Buddhist monastery in Taiwan. It's the headquarters of a new religious movement, founded in 1967, that promotes a new form of Humanistic Buddhism.

The monastery covers more than 30 hectares and includes a university and various shrines, with the complex dominated by a 36-metre tall statue of the Amitabha Buddha. 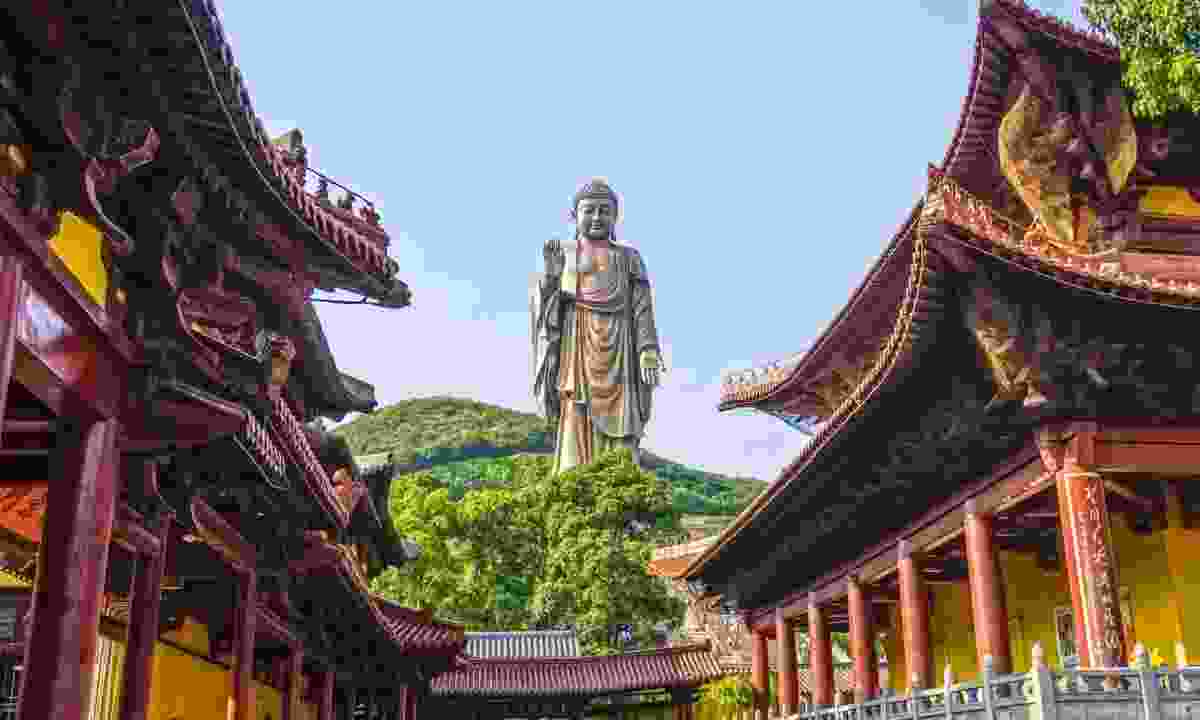 Standing more than 88 metres high, the Great Buddha at Ling Shan is a bronze Amitabha Buddha. It was completed at the end of 1996, weight over 700 tons and is reached by climbing 99 steps.

Deep in the Longshan Mountains, the statue is the centrepiece of a Buddhist theme park that includes Brahma Palace, Five Mudra Mandala, Nine Dragons Bathing Sakyamuni and Xiangfu Temple. It is best visited in autumn, when the trees and the mountains are a riot of different autumnal colours.

6. The Daibutsu of Kamakura, Japan 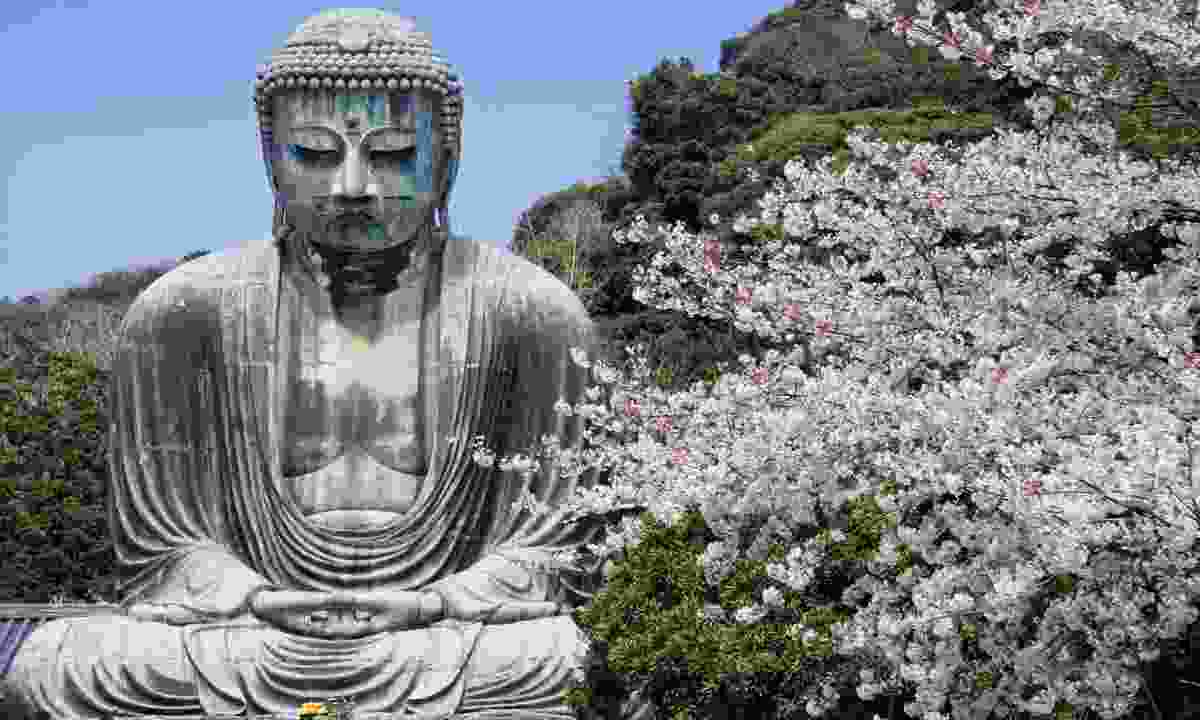 Whether covered in snow or prettily framed by cherry blossoms, the giant Daibutsu of Kamakura, sits serenely in the south of Japan with his eyes closed, desperately trying to block out the world.

And who can blame him? Since being cast in bronze in 1252, he has survived everything that nature has thrown at him, including a tsunami in the 15th century that washed away the temple that housed him. 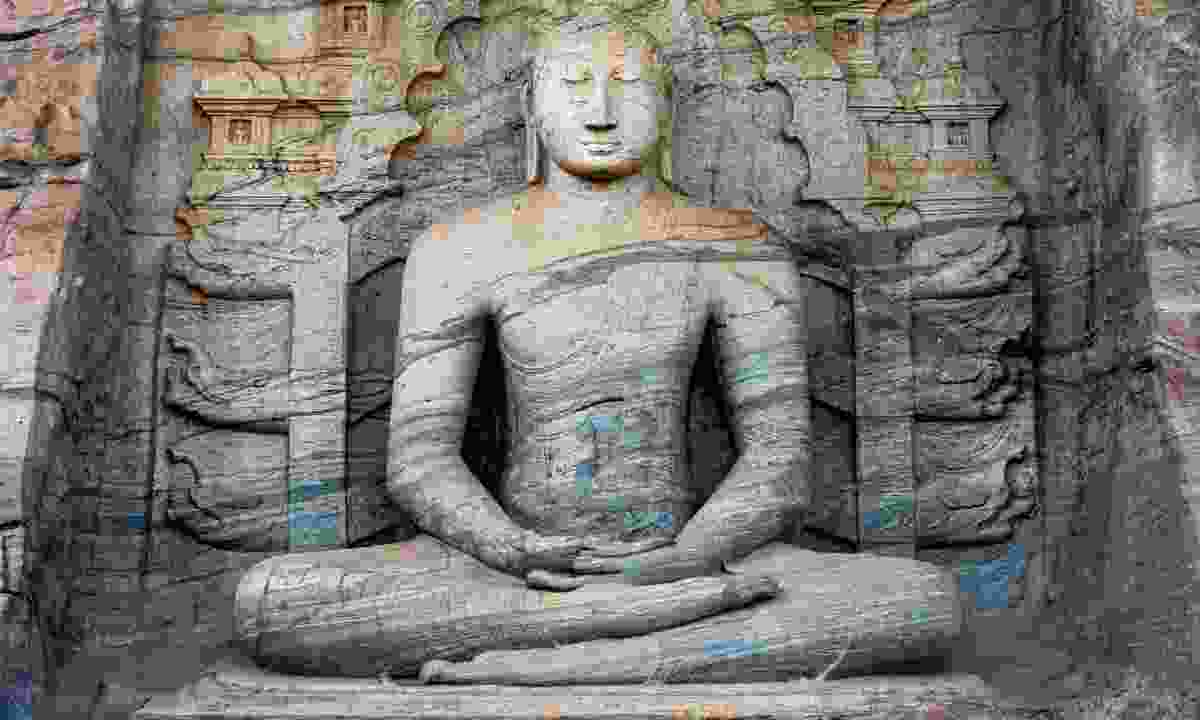 Carved into the face of a granite boulder, the Gal Gal Viharaya is considered one of the most beautiful representations of the Buddha in the world.

You’ll find it in north central Sri Lanka, in Polonnaruwa, a massive stone temple that was the centrepiece of a fabulous garden-city built by Parakramabahu the Great in the 12th century. 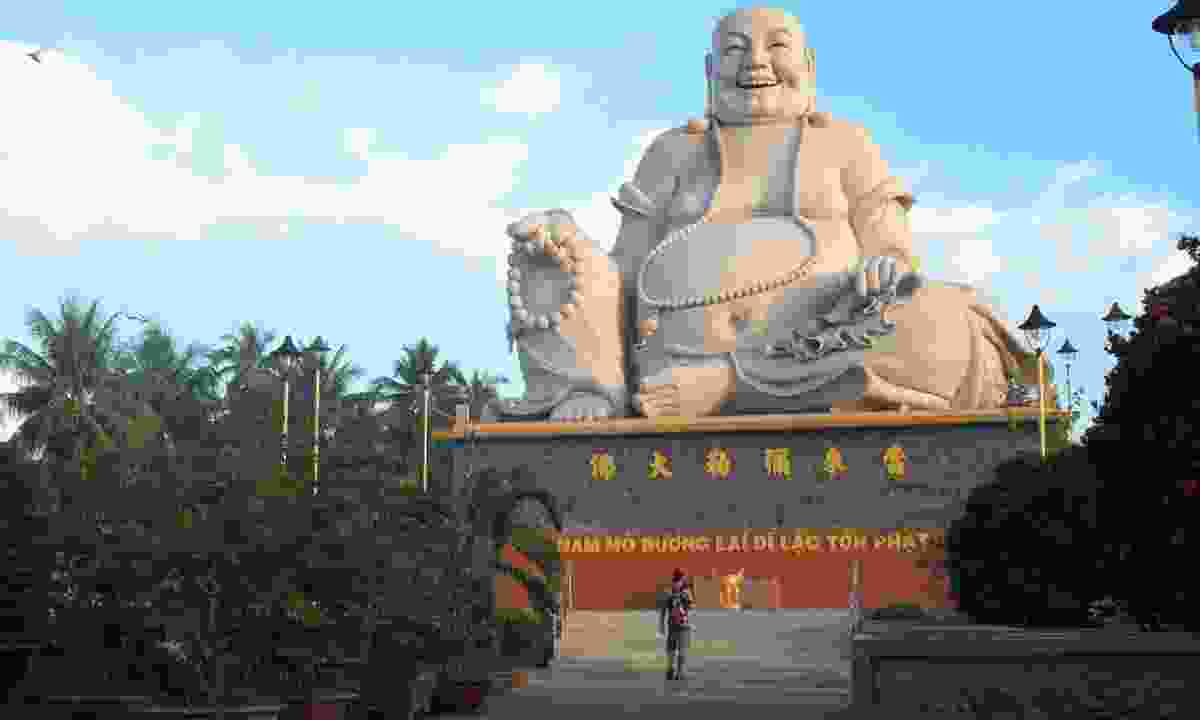 Bo Dai, or the laughing Buddha, is popular in homes and with children in Vietnam. He is famous for his big grin and even bigger belly, but it is rare you to see this incarnation of Buddha writ large.

When you do, the effect can be a little unnerving. To all intents and purposes, the Vinh Trang Pagoda in My Tho is your typical Buddhist temple ­: serene, silent, worshipful. But that is shattered when you stand before the giant Bo Dai. You can’t help but laugh out loud, which is perhaps its purpose. 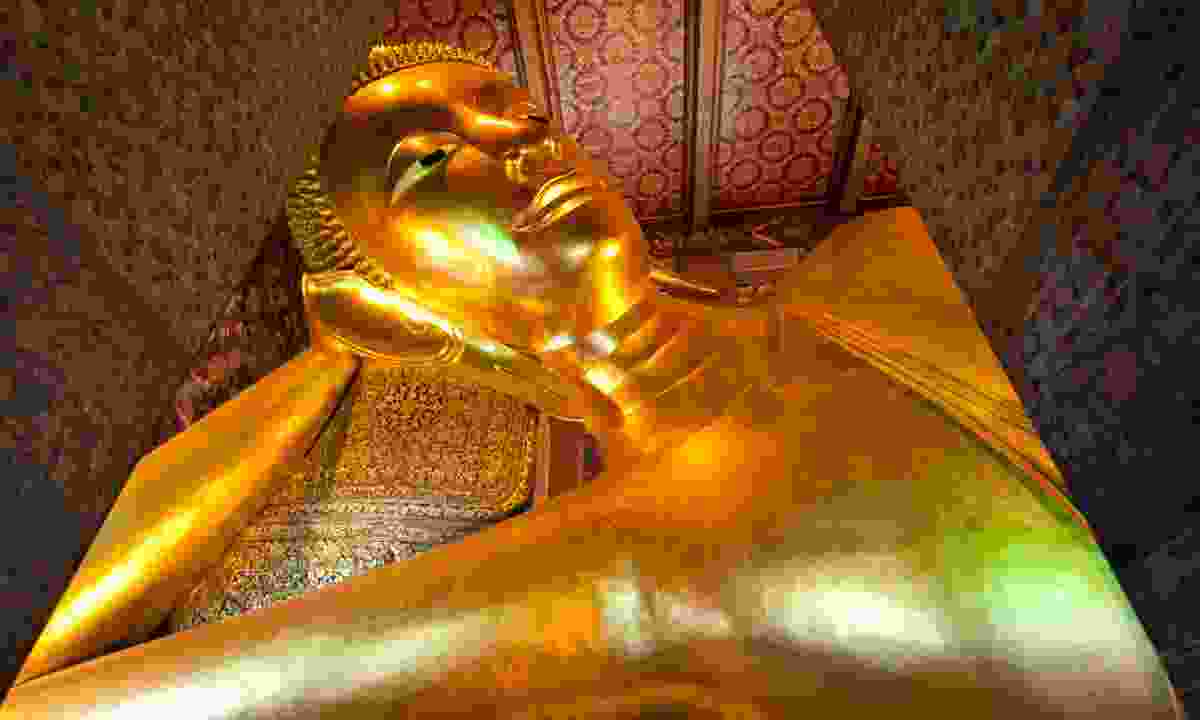 Wat Pho in Bangkok is a temple of superlatives. It is one of the largest and oldest temples in Bangkok, boasting the largest number of Buddha images in the country, and it houses the largest reclining Buddha in Thailand.

The gold-plated Reclining Buddha statue is 46 metres long and 15 metres high. Its eyes and feet are decorated with engraved mother of pearl and the soles of the feet display the 108 auspicious characteristics of the true Buddha. 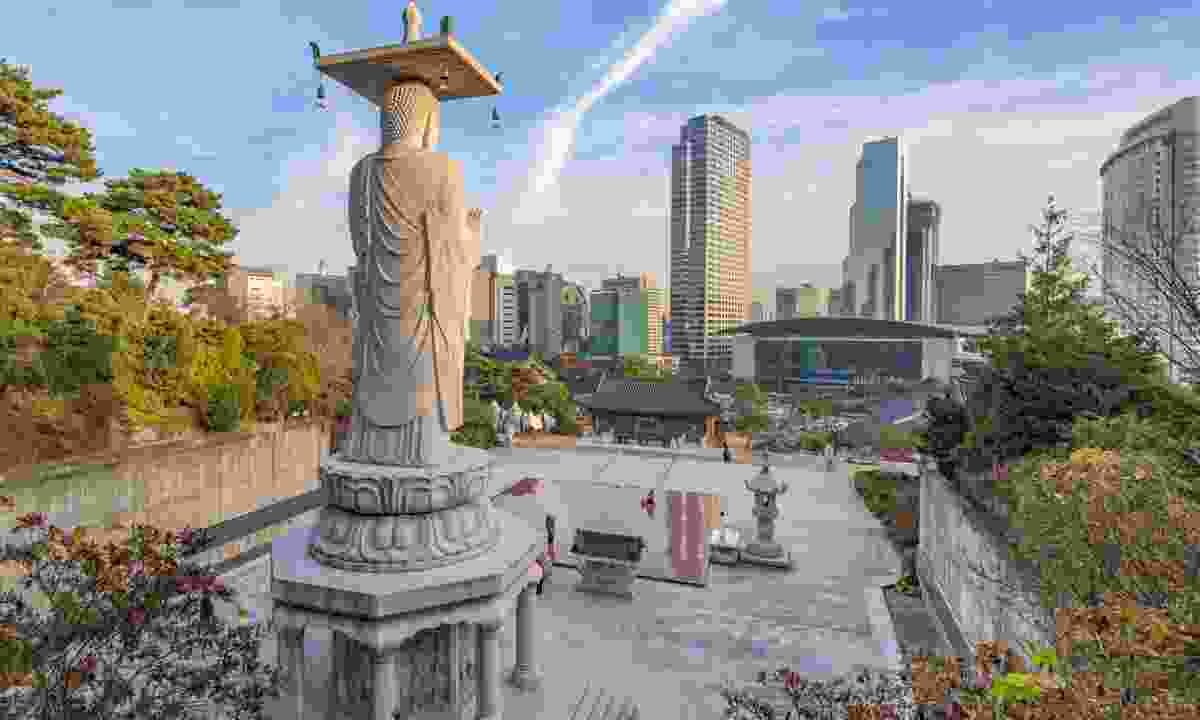 The giant Buddha of Bongeunsa looking towards Seoul (Dreamstime)

Impressive as the giant standing Buddha of Bongeunsa Temple is, it is the setting that makes it truly memorable. Gazing out serenely across the modern skyline of central Seoul, it is a beacon of stillness and peace in an increasingly hectic world.

Founded in 794, the temple has survived fire and war and the encroachment of the city. As well as its famous Buddha, the temple is also renowned for its unique ‘Temple Stay Program’, in which visitors can stay in the temple and lead the life of a monk.