South-East Asia’s top 10 travel icons: how many have you visited?

From Angkor Wat to Luang Prabang, South-East Asia is home to some of the most iconic destinations on the planet. Which one of these ten wonders are still on your travel ‘to-do’ list? 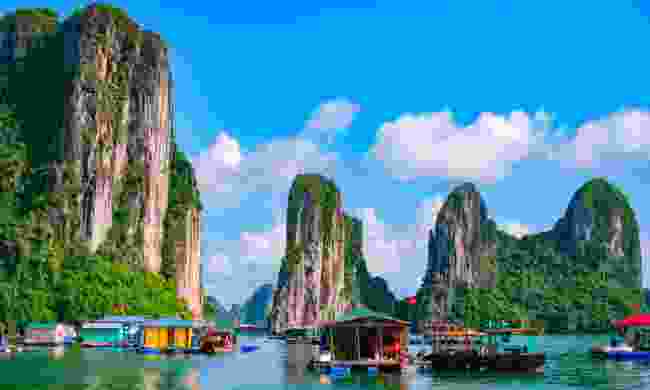 With its majestic limestone formations and sparkling emerald waters, Halong Bay is one of the most unforgettable sights in South East Asia. Dramatic limestone karsts rise spectacularly from the water, hiding mysterious caves and sheltering floating villages where fisherman go about their trade as they have done for centuries.

The bay is best experienced at water level. Traditional wooden junks that ply the waters, some offering overnight tours where you can bed down on deck under a canopy of stars. Feeling energetic? Then maybe you should consider kayaking in the bay. It’s a great way to explore the nooks and crannies of Halong Bay, revealing hidden caves and villages and offering the opportunity to tuck into a delicious seafood lunch at one of the tiny floating markets. 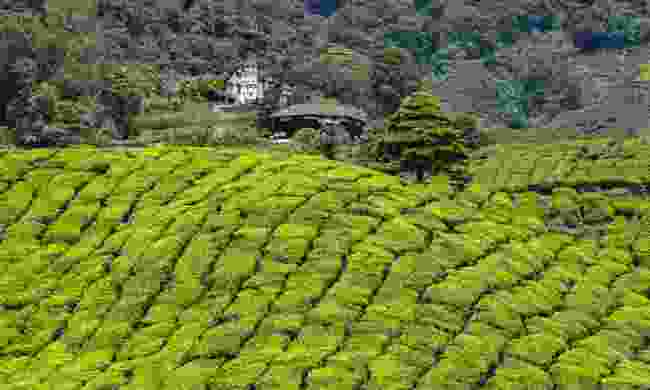 Cool, green and refined, the Cameron Highlands have long offered respite from the noise and heat of the Malaysian lowlands. Here, in rolling verdant hills, close to 2,000 metres above sea level, the temperature rarely gets over 25°C and everything is a soothing shade of green.

During the colonial area it was a popular retreat for the ruling Brits, and their influence can be felt across the entire region. Their biggest legacy, of course, are the tea plantations that cover the hills like an emerald quilt. You can walk amongst them on one of the hikes that criss-cross the region or simply gaze out across them from the verandah of a colonial-era tea room, preferably with a cup of the local brew to hand. 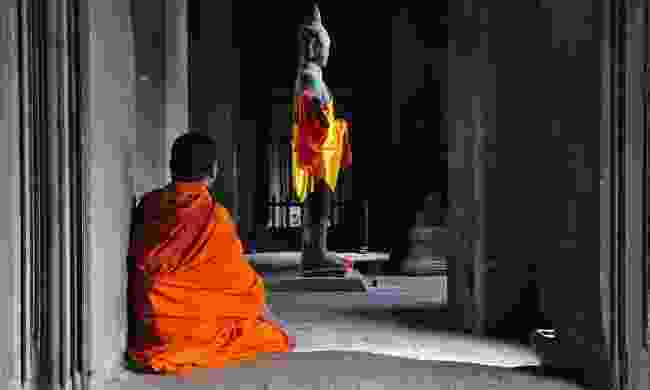 A visit to the ancient Khmer ruins of Angkor Wat is like stepping on to the set of an Indiana Jones movie. Expressionless stone faces seem to watch your every move. Twisted trees growing out of broken walls and forgotten corridors leading to unknown treasures. Occasionally, your eye will be caught by a flash of orange – the robes of a young monk, on his way to pray in one of the hidden chambers.

Built in the 12th Century, this vast complex of temples, stupas and towers was designed to be a miniature replica of the universe in stone. At dawn, when the sun’s rays filter through steam rising from the jungle floor and the morning is greeted by a cacophony of birdsong, it feels like you have stumbled upon a lost world. 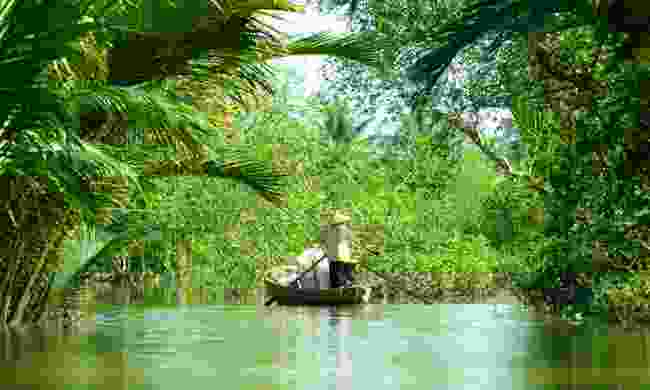 Traditional boat near Can Tho in the Mekong Delta (Dreamstime)

The Mekong Delta is the Vietnam of every traveller’s imagination – a land of rice paddies and buffalos, of fruit-laden boats and duck herders and locals cycling by in Ao Dai, a traditional white dress. It is a kaleidoscope of green, the ‘rice bowl’ of Vietnam, where life moves to the rhythms of the Mekong River as it makes its final journey to the gulf of Thailand.

Cycling the narrow lanes or exploring the waterways by boat will reward you with a real taste of rural life in Vietnam. Floating markets are the local equivalent of the corner shop, and hospitality is legendary here – expect plenty of offers to try the local firewater. The delta is also something of a biological measure trove. Birdlife is abundant and over 1,000 animal species have been recorded recently, including new species of fish, reptiles and mammals. 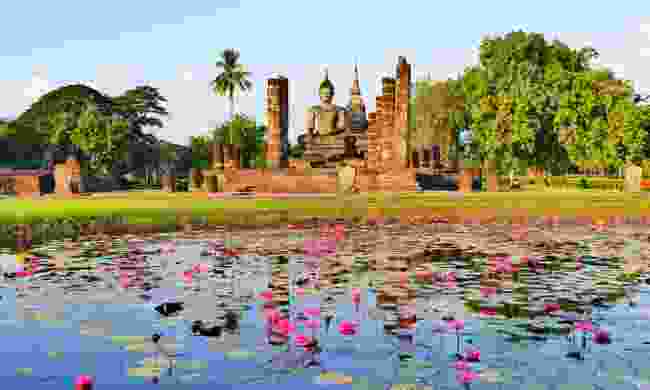 Sukhothai was the first capital of Siam and widely regarded as the cradle of Thai civilisation. It was here, 427 kilometres north of Bangkok, that Thai art, architecture and language developed and the country enjoyed an extended period of peace and prosperity. The picturesque Sukhothai Historical Park is home to its greatest achievements.

Wandering through the perfectly kept grounds, you’ll encounter exquisite temples, imposing palaces and solemn Buddhas. The park contains over 190 historical ruins, spread out across five zones, and can be explored by foot or on bicycle. Make time to watch the sun set behind the giant seated Buddha at Wat Mahathat. It is a memory that will last a lifetime. 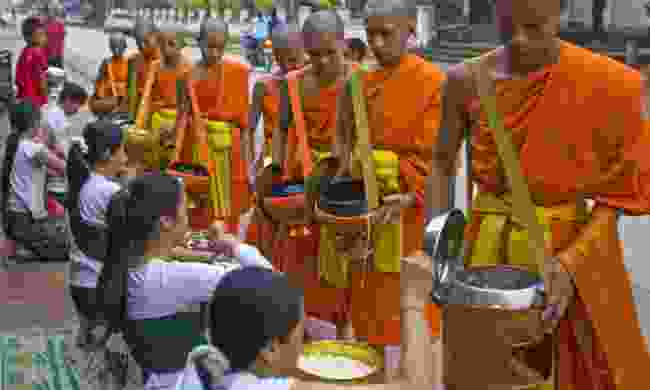 Tucked away on a sleepy bend on the Mekong River, Luang Prabang is an intoxicating blend of faded colonial charm and sleepy spirituality. Here life operates at a distinctly slower pace. Monks in saffron-coloured robes languorously roam the streets at dawn accepting alms, while visitors linger over the best best coffee in South East Asia on the balconies of French villas, redolent with charm and grace.

As sleepy and friendly as Luang Prabang is, there is still adventure to be found in the mountains that surround it and on the rivers that run through it. The turquoise pools of Kuang Si waterfall offer a refreshing respite from the midday heat, as do the riverside temples on the other side of the Mekong. And with countless trekking paths, mountain bike trails, kayaking trips and river cruises, you can be as active or as slothful as you like.

Tip: if you choose to witness the alms giving ceremony, ask a local how to do so respectfully - it's one of the most sacred Lao traditions. 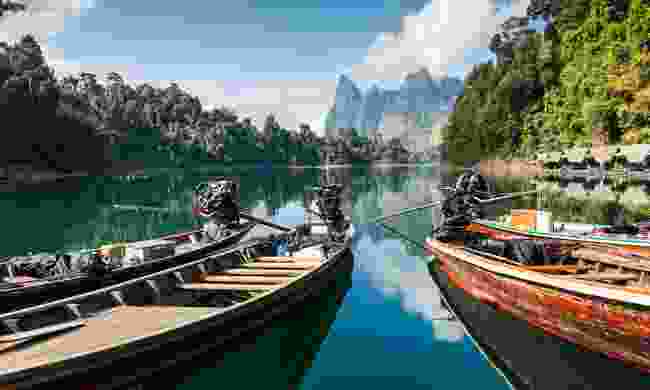 If wildlife is your thing, Khao Sok National Park in southern Thailand should be top of your list. One of the oldest rainforests in the world, it is a pre-historic land of impenetrable jungle and towering limestone karsts. It is also home to rare flowers, colourful birds and large mammals such as sun bears, marbled cats, elephants and even tigers.

Exploring this ancient wilderness is an adventure in itself. Hiking trails criss-cross the park, many overgrown and requiring a machete, or you can explore it by raft, kayak or long boat via the Sok river. Your reward is the chance to see some of South East Asia’s most endangered animals in their natural habitat. Or to catch a whiff of the unmistakable stench of a flowering Rafflesia kerrii, the world’s rarest and smelliest flower. 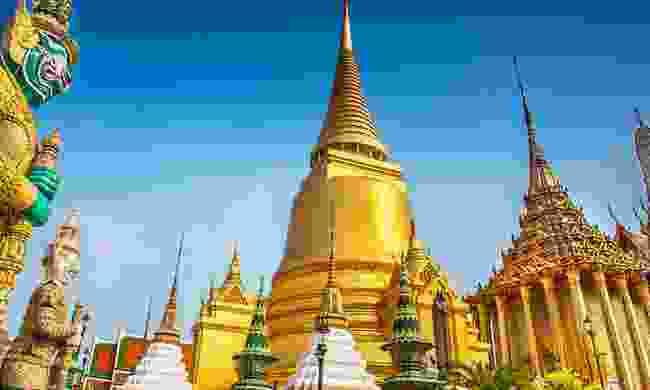 You won’t have any difficulty spotting the Grand Place in Bangkok. Rising like a lotus flower beside the busy Chao Phraya River river, its gilded stupas and vibrant tiles are a welcome dash of colour in this bustling, chaotic city.

Built by King Rama 1, the Grand Palace was the royal residence and the administrative heart of government for over 150 years. No expense was spared – from the grandest temple to the tiniest mosaic, the level of craftsmanship is breathtaking.

At the the heart of the complex lies the Temple of the Emerald Buddha, Thailand’s most sacred site. Watched over by two giant demons, standing guard at the doorway, the exquisitely carved Buddha sits beneath a nine-tiered canopy, its robes changed three times a year by the king to mark the changing of the seasons. Join reverent locals as they pray before the statue, asking for the Buddha’s blessings. 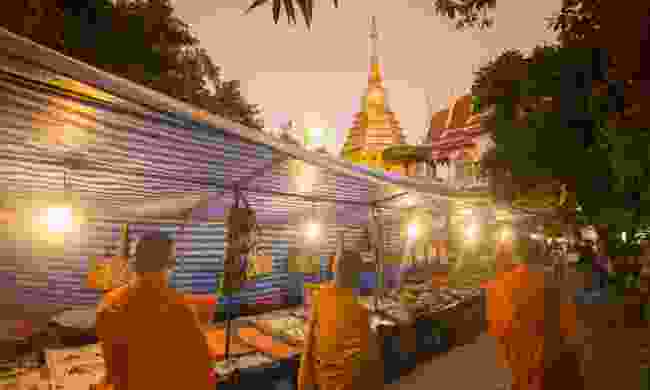 A night market near a wat in Chiang Mai (Dreamstime)

Chiang Mai’s Night Bazaar is one of South East Asia’s most exciting experiences. A bustling assault on all of your senses, the market dates back to the time when Yunnanese trading caravans that stopped here as they made their way from China to Myanmar.

When the sun dips below the horizon, follow your ears – and your nose – to the area around Thanon Chang Khlan. Here, illuminated under strings of colourful lights, you’ll find market traders setting out their wares, street hawkers firing up their grills and eager visitors haggling over colourful trinkets or tucking into delicious street food. The atmosphere is relaxed and fun, but don’t forget to bargain. The locals will be offended if you don’t. 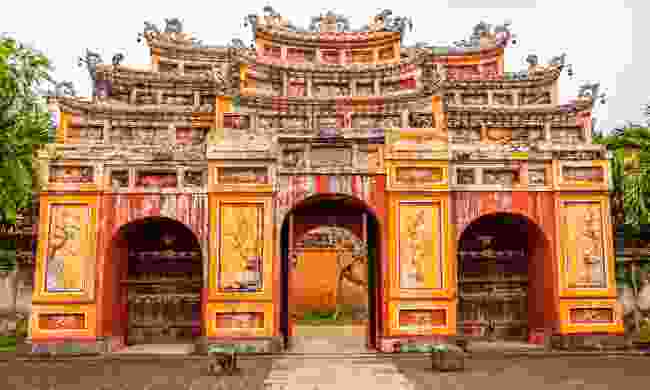 Set on the banks of the mighty Perfume River, the sleepy town of Hue in Central Vietnam has always played an important role in the country’s turbulent history. It marked the divide between north and south in the Vietnam war and, in the 1800s, was the seat of an empire that once rivalled the one in China.

The heart of that empire was the Forbidden Purple City, a fabulous walled palace within a citadel, reserved solely for the personal use of the emperor. Today, visitors are free to walk within its crumbling walls and admire the impressive array of temples, halls and theatres, many of which are being restored to their former glory. Here, beside the Noon Gate, it is easy to imagine grand royal ceremonies that took place here.