Mozambique is back. Once one of Africa’s most-visited destinations until civil war wiped the country off the tourist map, Mozambique is slowly resurrecting its costal resorts and game reserves.

Essentially two countries, Mozambique’s southern coastline is already popular with a few African holidaymakers while the north’s lack of infrastructure makes it an ideal choice for intrepid travellers keen to beat their own trail.

Southern Mozambique’s beautiful palm-lined beaches are wonderfully crowd-free and offer great snorkeling, diving and game fishing. Many are within a day’s drive of Johannesburg and are close to Mozambique’s national parks. The little-visited north has fewer highlights but Ilha do Moçambique and the island town of Ibo is definitely worth a look.

When to go to Mozambique

The best time to visit is May to October, when it’s dry and temperatures are at their lowest. You can travel from November to January, but temperatures and humidity are considerably higher.

Avoid the height of the rainy season – February to April – as many roads become impassable. Also, resorts in the south are often overcrowded around Easter, Christmas and South African school holidays.

Getting around in Mozambique

Distances are huge, so flying is the best option unless you have unlimited time. Frequent flights connect the major cities. Machibombo (coaches) run between major towns at least daily. Away from main routes, use chapa (converted lorries or minibuses) to get around. Both leave early in the morning and stop frequently. Cars can be hired in Maputo, Nampula and Beira.

Tourism in Mozambique is still developing and there are few Western-style hotels, particularly outside the established tourist destinations on the coast. Standards are not high but the prices can be. Look for signs that say pens?o (guesthouse), pousada (inn) complexo turistico (tourist compound), boma (camping pitch) and barraca (bivouac you can camp under).

Staples such as rice, cassava-based bread and chicken are often spiced with piri-piri (hot chilli sauce). Seafood is excellent – especially prawns and fresh fish. The local beers are 2M and Laurentina.

Ensure you’re immunised against typhoid, tetanus, diphtheria, polio and hepatitis A and B. Malaria is endemic; consult your doctor about the recommended prophylaxis. Drink purified water. 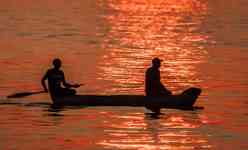