Swimming with turtles at Sipadan, Borneo

These aquatic beauties may not have the awe of sharks, but their grace and charisma make for an unforgettable dive.

At Sipadan, off the coast of Borneo, strong currents swept in from the Celebes Sea. In the early morning light I drifted across the shallow reef plateau on the eastern tip of this tiny uninhabited island, surrounded by curious batfish and clouds of brilliant-yellow snappers.

Like most divers I had come here in search of big fish: the fast, open-water species such as jacks, barracuda and tuna. Here, around this island surrounded by deep waters, the currents are always rich in plankton, nourishing the reef and its inhabitants, and everything that comes in from the open ocean to feed on them. The current took me across the plateau at speed, allowing me to pass through a pack of whitetip reef sharks.

Out in the blue I could see six or seven of their bulkier cousins, grey reef sharks, staying aloof. A giant Napoleon wrasse hung in mid-water, eyes as big as ping-pong balls, bulbous lips and shimmering green flesh catching the sunlight from above.

At the edge of the reef, where the deep blue abyss plunged into darkness, there was a shimmering ball of barracuda, great silver streaks that swirled together like an underwater tornado. Swimming beneath them, I looked up through the living vortex as if in a chimney. 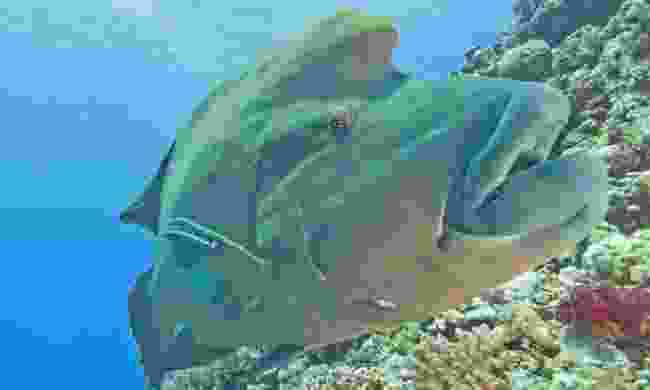 Drifting over the lip of the plateau I descended out of the grip of the current, hugging the reef wall and catching my breath. The hard corals are healthy here, bright swatches of colour in contrast to the limestone plateau swept clean by the racing tides.

I had read that turtles were common off Sipadan, but the excitement of the fast drift dive had filled my head with images of sleek silver hunters. Absorbed in the wall, I stared hard at wispy gorgonians, hoping to catch sight of a sea horse.

Then, tucked into the reef wall, I spotted the unmistakable patterned disc of a turtle. Not a metre from my face-mask I stared at its wrinkled neck and saw it blink one hooded, dark eye.

Instinctively I finned away, afraid I would disturb the docile reptile. But it did not move, resting on its ledge and chomping on some soft coral. Steadying myself in the gentle current I hovered parallel, watching the hawksbill turtle using its beak-like mouth to munch.

I tried to gauge its length: almost 1.5m long, not including a stumpy tail that curled under the rear edge of its carapace. The turtle continued feeding, seemingly unfazed by my presence, but good manners seemed to dictate that I move away, as if I’d been caught staring at a stranger eating in a restaurant. 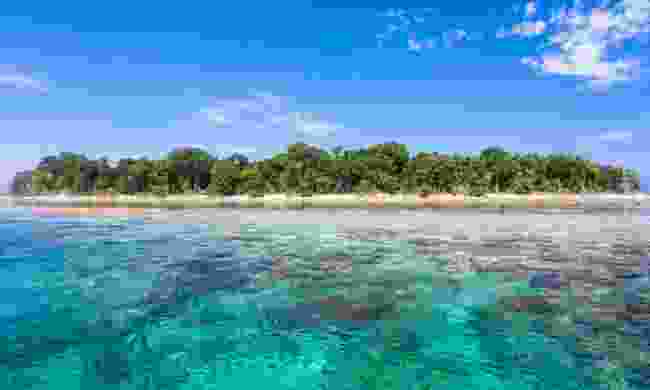 The island of Sipadan. (Dreamstime)

A minute later I saw a smaller turtle peeling away from the wall and heading directly for me. Again, I folded my arms to hang motionless in the water column, wary of frightening the graceful creature. It was a green turtle, a young specimen with an unmarked shell, its distinctively rounded edges as perfectly shaped as an Etruscan shield.

I had seen many turtles in hundreds of dives all over the world, but never more than three at once. At Sipadan that day I counted 12 individuals within range of my puny human underwater eyesight. Slow and helpless as they seemed when resting on the reef, gliding through the water they became sublime. A tiny movement of a flipper would trim their flight as they swam, and silhouetted against the pale surface of the ocean they became perfect flying discs. 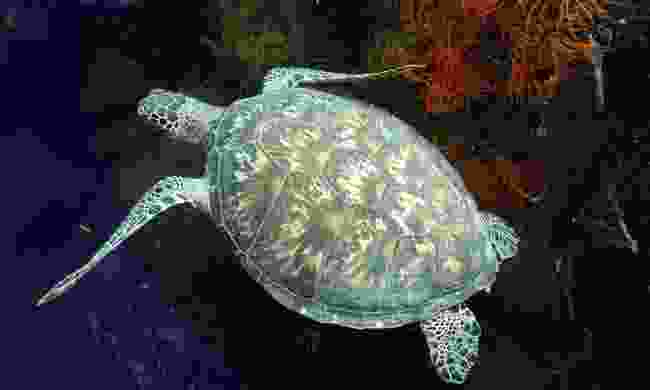 Meeting turtles underwater is not exciting in the same way that seeing a shark or a manta ray might be. But many divers say that seeing turtles makes them feel like crying. Even in the young animal, the skin around the neck appears cracked and worn and, improbably, the turtle’s eyes appear moist even underwater.

Peering at the world like an old man struggling to focus, the turtle somehow conveys a sense of calm. To swim at a respectful distance from a turtle, matching their pace without inspiring fear, is to fall in love, charmed by ancient eyes.