9 of Chicago's spectacular buildings every architecture lover must visit

Historic, innovative and striking. Chicago, home to the skyscraper, has some of the world's most iconic structures. Here we pick nine of our favourites...

Chicago was home to the world’s first skyscraper back in 1885, and whilst The Home Insurance Building was a modest 10 stories, back then it was an impressive achievement. The city has seen its skyline develop with incredible architecture ever since. From neo-gothic and art deco, to postmodernism and prairie, visitors to the Windy City are treated to some of the world’s most historical, innovative and fascinating buildings. Here, we select nine of our favourites... 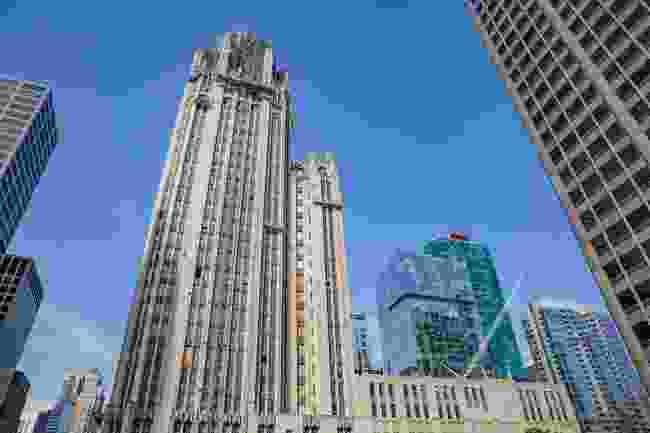 The neo-Gothic Tribune Tower borrows its ideas from some of the world’s most historic buildings and sites. This great building has roughly 150 fragments from the Winter Palace in Beijing, Westminster Abbey in London, the Great Pyramids in Giza, and the Parthenon in Athens incorporated into the design. A competition was launched in 1922 to mark the Chicago Tribune’s 75th anniversary, and New York firm Howells & Hood beat the other contestants to create this Gothic Revival building that stands proudly opposite the Wrigley Building today. Perfect for those who love architecture and history, Tribune Tower also has its own Hall of Inscriptions, where carved into the walls of the lobby are famous quotes from some of the world’s greatest thinkers. 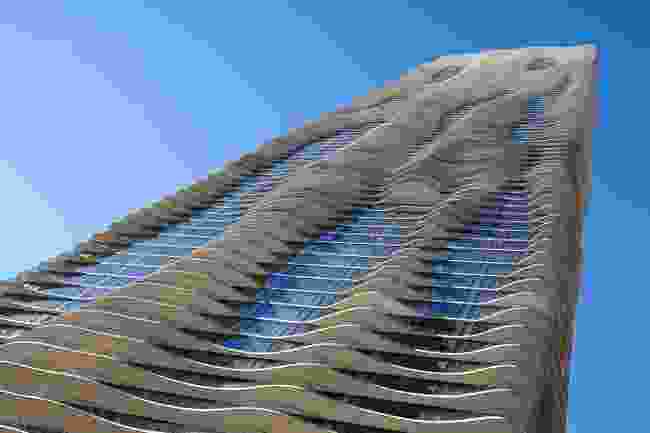 The rippled exterior of the Aqua Tower (Shutterstock)

An outdoor sculpture as much as it is a piece of architecture, the Aqua Tower shimmers high above downtown Chicago. The tower’s design, the Jeanne Gang led architecture firm, Studio Gang, is inspired by the shores of Lake Michigan, with balconies individually sized the whole way up the 80-story building to create its distinctive rippling appearance. Not only does the curving white concrete balconies and coloured glass of the tower create the impression of water, the design is also planet-friendly and breaks up wind vortex, as well as minimizing sheen to protect birds from colliding with it. 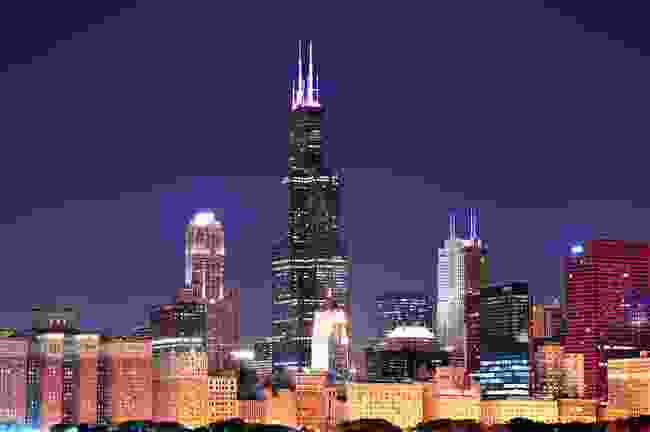 Formally known as the Sears Tower, Willis Tower is an iconic sight synonymous with images of Chicago. Today the the tower is famed for its Skydeck on the 103rd floor, where visitors can step out onto The Ledge for 360 degree views of the city, looking out over 50 miles and four states on a clear day. At the time of completion it laid the foundation for the skyscrapers built today as Willis Tower was once the world’s tallest building constructed for the world’s greatest retailer – a title that it proudly held for nearly 25 years. 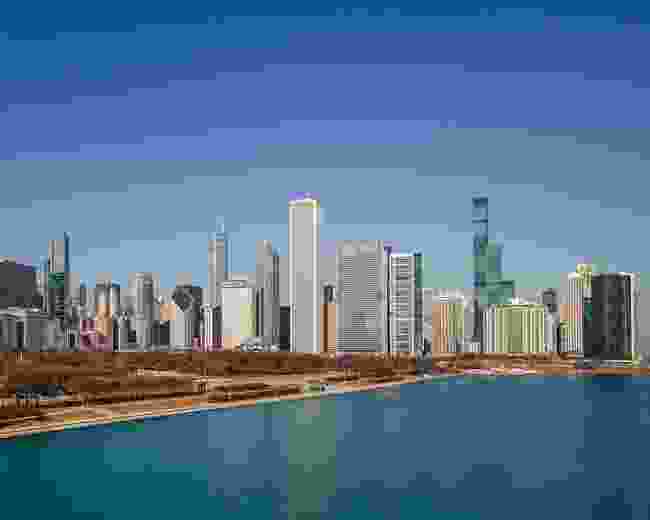 4. The St. Regis Hotel and Residences

New for 2021, and another incredible design by award winning architect Jeanne Gang, the St. Regis building has changed Chicago’s iconic skyline. Now the third tallest building in Chicago, and the tallest building in the world by a female architect, the St. Regis pays the perfect homage to sky and water. Looking up from the river, the tower’s unique shape is represented by three different columns of differing heights that look as though they are moving from each angle. The central column is also suspended in the air, allowing people to walk directly underneath for access to the riverside. Real lovers of architecture can even live in this shimmering masterpiece as the building offers the St. Regis Residences, and coming later in 2022 there will be the new St. Regis Hotel by Marriott. 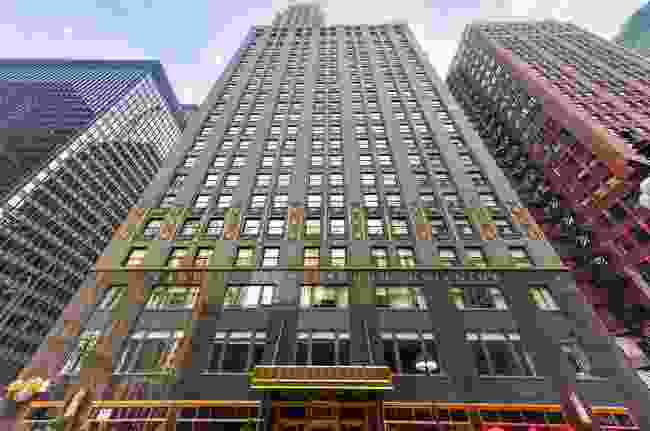 Completed in 1929, The Carbide & Carbon Building is the pinnacle of Art Deco design in the city. Unveiled during the prohibition era, it is rumoured that the building was designed to look like a champagne bottle, with its elegant golden top and green terracotta façade. Decadent in its design, the Burnham Brothers insisted that the golden top was 24 karat, creating a metaphor for the sumptuous décor of roaring twenties America. Today the building houses The Pendry Hotel, a new modern hotel that opened in 2021, inspired by the Art Deco era thanks to its home in this iconic building.

5 reasons why you should visit Chicago, Illinois 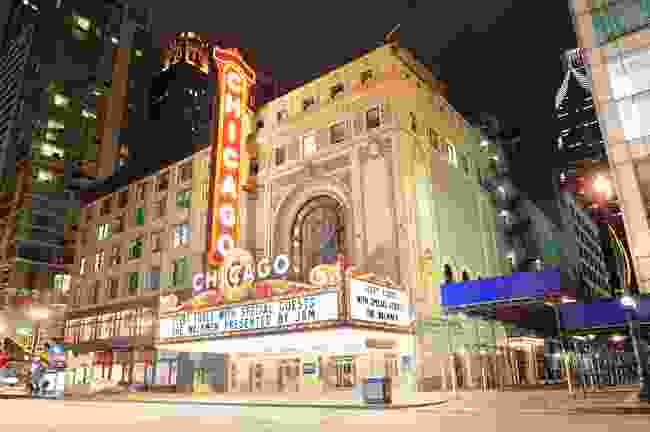 The Chicago Theatre is a classic example of an iconic American movie palace and is a must see when exploring the city’s architecture. Every inch of space was carefully considered when designing the theatre in order for it to be a place that visitors wished to stay long after feature length films had ended. This French revival style theatre calls to visitors on the street with its white glazed terra cotta exterior and Tiffany stained glass window. As iconic as the design is the large sparkling Chicago sign outside, calling to tourists and theatre goers to step inside. 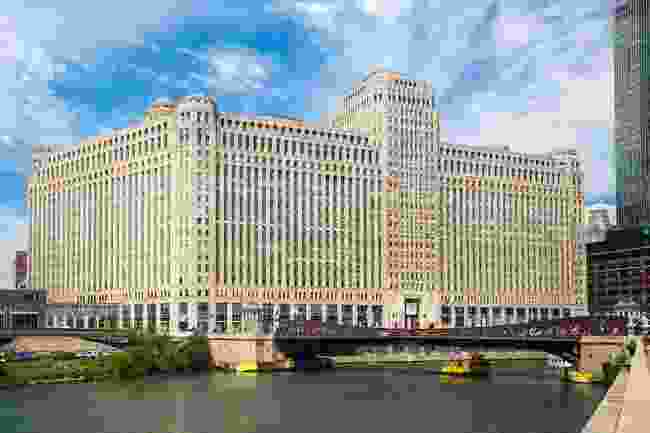 When it opened in 1930, The Merchandise Mart was the largest building in the world. Covering over two football fields worth of space, The Mart runs two whole city blocks and rises 25 stories at the junction of the Chicago River. Originally created as a central marketplace for retailers, designer Alfred Shaw incorporated the warehouse, the department store, and the office building all in one to make The Mart. While no longer used for its intended purpose, The Mart now breaks the record for the largest digital art projection on the planet, with its river facing façade lit up from March to December. 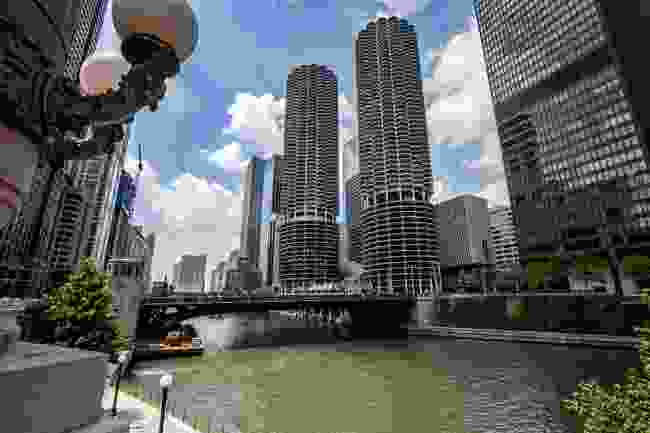 Marina City - also referred to as 'the corn cob' (Shutterstock)

No, these aren't just two large ‘corn cobs’ (although, that is this buildings nickname). Marina City was designed by architect Bertrand Goldberg with the idea of creating a city within a city and aimed to bring Chicagoans from the suburbs back to the living downtown. A new way of living, the design and development of Marina City was considered innovative and ahead of its time. It was completed in 1967, and with its two residential towers it also included office space, parking, theatre, shops, bowling alley, swimming pool and even a private marina with its location prime along the Chicago River. Every residential space is uniquely designed in that there are no right angles in any of the units, and this is just one of the features that has made Marina City an architectural gem in Chicago. 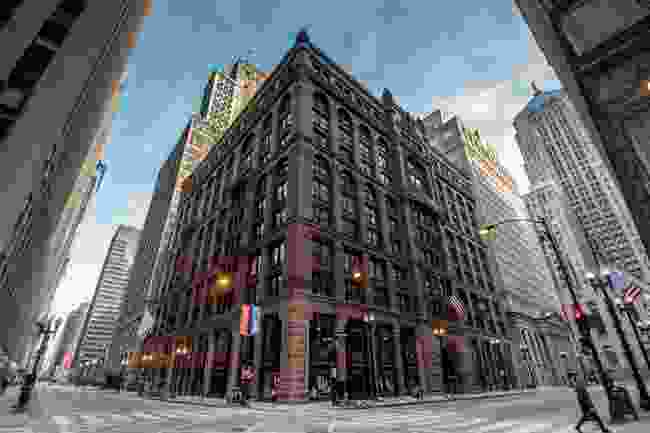 The Rookery is on the National Register of Historic Places (Shutterstock)

On the National register of Historic Places, this designated Chicago Landmark was once thought to be the largest and finest office building in the United States. The stunning light court inside the building is filled with white marble and sweeping iron staircases, all part of its 1907 redesign by Frank Lloyd Wright. The exterior is an experiment in using historical decorative elements for a contemporary building, with decoration reminiscent of Roman, Venetian, and Moorish architecture, bringing elements of medieval European architecture to the heart of Chicago.

7 art galleries that are a work of art themselves

12 of the world’s most incredible buildings, from castles to cathedrals

Quiz: How well do you know the world's most striking architecture?