Miami is sparkling and raucous; Orlando is full of thrills; but the little town of St Augustine, nestled into Florida’s historic coast, has something those glitzy big cities lack: charm.

Founded in 1565, St Augustine, 65km south of Jacksonville, is North America’s oldest continuously occupied European settlement. And it shows: more than 450 years of history are infused into its cobbled stones, from its narrow, winding streets and old colonial forts to its bright Spanish Revival architecture soaring in gilded towers. This may be the USA, but it feels more like an old-world European break.

That is, apart from the beaches. St Augustine may have history that predates the country itself, but this is still the Sunshine State. White sand stretches 67km along the coast, from golden bays filled with buzzing resorts to wild desolate dunes with not a soul around. Kayak along peaceful waterways with dolphins and manatees brushing past your boat, hike nature trails through estuaries ringing with birdsong, or cast a line and wait for tarpon and mackerel to bite.

That’s what St Augustine is about. Culture and open air. Historic sites in the morning, wild coastal adventures in the afternoon. Sounds pretty charming to me. 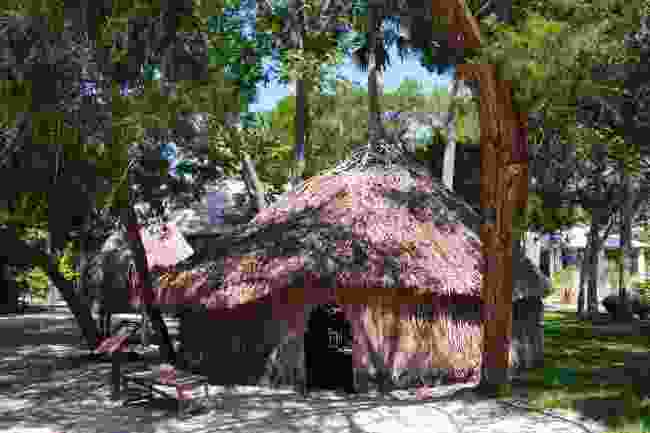 Fifty five years before the pilgrims landed on Plymouth Rock, Admiral Don Pedro Menéndez de Avilés spotted a Timucuan village on the coast, came ashore and claimed it for Spain. Those roots still define St Augustine to this day, especially in its Historic Downtown: 144 blocks of living history framed by the sparkling waters of Matanzas Bay.

The sites here though are interspersed between museums, galleries and restaurants with outdoor terraces that spill onto the streets. This is a place to wander, to slow down and soak in the atmosphere, colour and scents – of seafood and sweet treats – that drift on the air. One of your first stops should be the Fountain of Youth Archaeological Park, which marks the site of the original Timucuan village, Seloy, where the town was founded. Dispersed around its 61,000 sq km waterfront are numerous exhibitions that showcase the Native American and colonial history of the town.

Nearby, is the Castillo de San Marcos: the oldest masonry fortification in the United States with nearly 350 years of stories hidden within. But perhaps most impressive of all is the Colonial Quarter, a walk-through recreation of the town in different stages of its history, from 16th century boat makers and blacksmiths to 17th century watchtowers, where Spanish soldiers would have watched for pirate flags on the horizon. 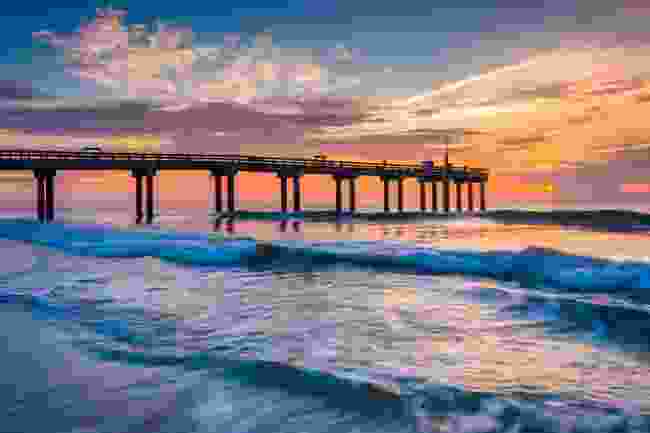 This northern coastal sliver of Florida may be an oasis unto itself when it comes to history, but when it comes to beaches, it’s all-out Sunshine State. Stretching 67km along the coast, joined together by the scenic A1A Beachfront Avenue, its sandy spots offer visitors a varied menu of wildlife and wandering.

In the north, Ponte Vedra is the most upmarket choice, with resorts, golf and all manner of ocean fun. A few kilometres south, at the Guana Tolomato Matanzas (GTM) Research Reserve, it changes completely: an estuarian eco-system, completely wild and filled with nesting sea turtles and more than 350 species of birds, including parakeets, egrets and plovers.

Further south, St Augustine Beach is lively, fun and right outside the Historic Downtown. Crescent Beach, on Anastasia Island, is one of the most scenic and untouched in the region, while Anastasia State Park is all about hiking barefoot in the sand, kilometres of beach crossed by dunes and some of the best sunrises you’ll ever see.

No matter which shore you traipse over, keep your eyes especially peeled for a very special memento: the beaches here, especially Vilano and Mickler’s Landing, are some of the best places in the country to find sharks’ teeth washed up on the shore. 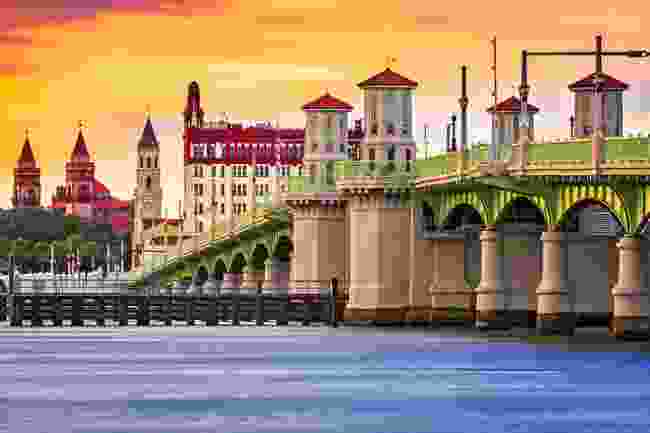 The centuries of history will spark your curiosity and the beaches will fill your senses, but the waterways of Florida’s Historic Coast are where you’ll find adventure. The Matanzas, Tolomato and Guana Rivers pass right through here and, because they are protected from the ocean, the waters are calm, easy to paddle and perhaps the best way to experience the region’s local wildlife.

A fine way to dip your oar in is to paddle The Salt Run, on the edge of Anastasia State Park and one of the best places to spot dolphins and manatees; maybe try cruising through the rich birdlife of the GTM Research Reserve; or take the chance to float along the bayfront of Downtown St Augustine, taking in the history from a waterside view. Stand-up paddleboards, surfboards and hydrobikes (like a pedal-powered mini-catamaran) are available too, as are more motorised adventures, including Florida’s iconic airboat tours. 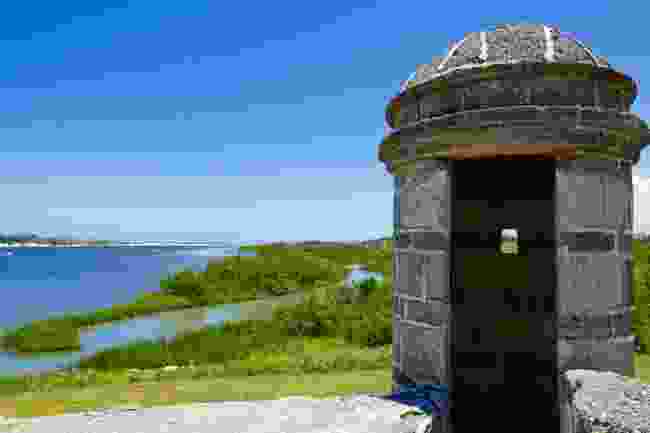 Fort Matanzas This 18th century fortified watchtower marks the site of many battles and storied history of the region, from early Spanish rule through to the American Revolution. Take the ferry across to the fort, and it’s still possible to climb the stone steps and peer out across the waters where British warships once sailed in. But today, just as important is the 1.2 sq km of eco-system that the park protects and can be explored through nature trails along the banks.

Fort Mose Mose (pronounced ‘Moh-Say’) was the first legally sanctioned ‘free black town’ in the country. Risking their lives to escape the English plantations of Carolina, African-born slaves crossed the dangerous swamps south to Spanish-controlled Florida where they were freed in exchange for their service to the crown. Fort Mose was their home, the end of the first American Underground Railway to freedom, a century before the civil war. The fort itself no longer stands, but the history is still palpable and the waterfront is ideal for birding or gentle paddles.

St Augustine Lighthouse & Maritime Museum Climbing to the top of this 50m lighthouse is worth each one of the 219 steps. From the top, the views across St Augustine’s Historic Downtown and inlet lagoon offer the best sunset view in town. But the Maritime Museum also tells the stories of the nation’s oldest port, with boatwrights demonstrating ship building and – if you come after dark – you can go on a ghost tour where you might just meet a few of its former keepers. 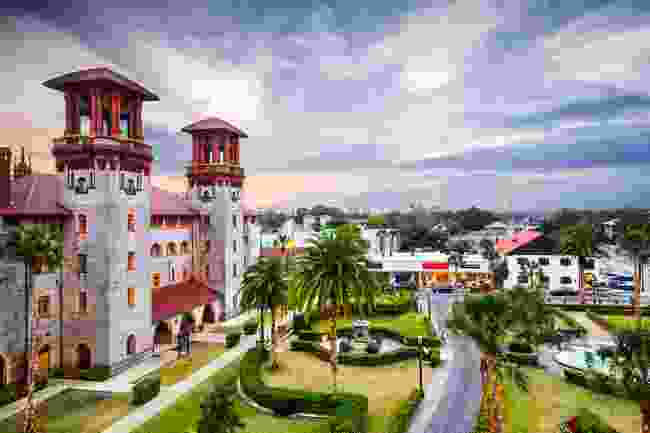 Food Enjoy seafood so fresh that it still smells of the ocean. For traditional Florida recipes and farm-to-table food, check out The Floridian, while Cap’s on the Water offers great views of the Intracoastal Waterway while you eat. Try traditional Menorcan dishes at Aunt Kate’s; the Menorcans were one of the town’s original settlers, and much of their culinary influence can still be savoured here, including local twists on classic Spanish dishes like paella and clam chowder. But don’t forget to try the local delicacies too, especially St Augustine-style fried shrimp.

Hotels For relaxed beach style digs, go for a ‘vacation rental’ along the Ponte Vedra coast. Splash out on a luxury waterfront home with private pool and dock or settle into a cosier cottage steps from the sand. For something more unique, head to one of St Augustine’s Historic Downtown hotels. Casa Monica is the city’s grande dame: it is filled with original art and antiques, as well as boasting a waterfront pool for that mid-afternoon cool down.

Golf Ponte Vedra is also home of one of Golf’s most famous, and difficult, courses, TPC at Sawgrass. Come to play or watch the pros at The Players Championship, one of the sport’s premier events. But if taking out a mortgage to play 18 holes isn’t your cup of tee (pun intended), don’t worry: St Johns Golf Club in St Augustine is far more affordable and you won’t spend half your time fishing balls out of the lake. Check out the World Golf Hall of Fame nearby too for some pre-round inspiration.

Museums Downtown St Augustine may be a living museum in itself, but you should certainly make time to visit The Lightner Museum. Home of one of the country’s premier collections of 19th and early 20th century fine and decorative arts, the museum is like Florida’s very own Smithsonian. Don’t miss a tour inside the former Ponce de Leon Hotel too, now Flagler College: opulent enough to drop your jaw, it is the premier representation of St Augustine’s eye-catching, gilded age architecture.

Catch up on our Louisiana, USA event