Searching for pygmy elephants in Borneo

Find out how one woman's search for Borneo's elusive pygmy elephants led her to discover the secrets of the Kinabatangan River.

This magnificent waterway runs through the dense rainforest in the Malaysian state of Sabah. The rich, fertile area hosts some of the most eclectic and rare wildlife in Borneo, including the highest concentration of orangutans. The physically imposing river is fed by a huge network of tributaries, meandering through the sandstone hills, jungle-clad mountains and fertile lowlands, before flowing into the Sulu Sea. Sadly, with the increase of logging and development of industrial plantations, many of its habitats and species have become threatened.

To ensure conservation of this fragile area, and the wildlife that nurtures it, eco-tourism schemes have been implemented to benefit both the local environment and communities. Jungle lodges have been constructed to allow tourists to visit the river in a controlled manner in an effort to allow them to understand how the rainforest works. Local guides are highly knowledgeable, with a magnificent eye for detail, spotting camouflaged animals from great distances. General packages offer day and night cruises and treks over a two or three day period. I opted for the three day package, including all activities and two nights stay on the riverside lodge.

I stayed with the Orang Sungai (the River people); a peaceful community who were at one with their surrounding nature. The river is their life. Not only has the nature adapted the ability to survive under desperate conditions, they have too; welcoming change and learning from it. 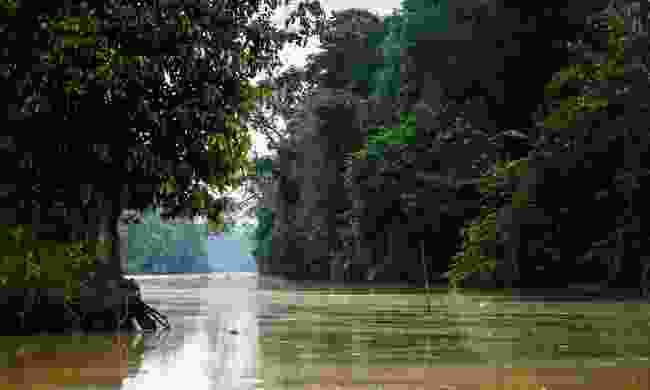 The sun was disappearing behind the dense rainforest as the wooden boat drifted quietly across the waters of the Kinabatangan River. A light mist rose from the surrounding banks. We peered intently at the gallery of trees, searching for one of the many mysterious creatures who live among the thick vegetation.

Minutes after setting off from the jungle lodge our tour guide discovered an area, among the chaotic assortment of trees that clung to the river banks, heavily laden with proboscis monkeys. Turning to face our party of eight, he gestures to be silent. Switching the engine off and allowing the boat to float towards the banks, we curiously approached the creatures. Some sat lazily on branches, contently munching on leaves, while others boisterously cavorted about, leaping daringly from tree to tree. Clearly distinguished by a flattened, pendulous nose, their posture is ballet like; perfectly straight backs holding their round body upright. They appear unfazed by the large drop to the water beneath them, effortlessly swinging from branches as the group move upstream in a random and dynamic fashion.

The more we concentrated, the more our surroundings revealed. Searching the banks, we encountered the unblinking state of a prehistoric-looking monitor lizard which lay half hidden under a thick low-lying branch. For a somewhat fierce-looking beast, it was surprisingly timid – appearing frozen with fear as we moved towards it. The clicking cameras and the gentle rumble of the boats engine soon sent it scurrying back into the shadowy forest.

Further downstream, we left the boat and headed out into the jungle on foot. Once underway it was tempting to tread gingerly – the paths alternated between muddy puddles and streams. On occasions I found myself grabbing to the trunk of a tree to pull my body out of the sinking mud. But Eddie, our guide, set a cracking pace, so myself and the others, pushed ourselves to keep up. We plunged downhill through misty, moss-draped forest. The jungle was throbbing with the symphony of nature and electric insect noises.

Eager to learn more on the wildlife in the area, I began to question Eddie. Immediately he reels off a list which included orangutans, hornbills and pygmy elephants. Particularly fascinated at the thought of a miniature elephant (in comparison), which are rarely seen by tourists visiting the area, I made it my mission to be one of those lucky few. There are no more than a 1,000 pygmy elephants left in Sabah due to logging, palm oil plantations and human settlements. Our guide spots fresh tracks along the shore, 'Smells like they've been here a few days ago,' he announces.

Eddie continues to go into detail about the insects and plants, encouraging us to taste the mint leaves he's picked up on the way. Silence is punctuated by the sound of macaques calling and hornbills squawking as they fly in and out of trees. Colourful kingfishers dot the air, and snakes drape from branches. The atmosphere was enchanting; an experience which I couldn't resist comparing to an episode of a David Attenborough documentary. I felt like I was in the heart of wildlife, in its natural environment, untouched by the disruptive hands of mankind.

This first outing set high expectations, however, each additional boat trip rewarded us with fascinating wildlife sightings. The river was serene and its purest at dawn. Sunlight pierced the towering canopies, the water shimmering as the morning mist touched the surface. During an eerie 6am cruise, we see the most remarkable sighting of our journey – a pygmy elephant, drinking from the open banks of the Kinabatangan. Then, just a couple of metres away, two menacing eyes peering at the boat from the shallow banks. A large crocodile lurks in the muddy waters; awaiting its prey before slowly disappearing below the surface in a circle of bubbles.

A sense of mystery and rare promise of untouched wilderness lured me into the heart of the Malaysian rainforest. I became captivated by the jungles mesmerising rhythms; the landscape in all its beauty, the solitude and chance encounters with extraordinary wildlife. Sights of the unexpected, transformed an ordinary trip into something exceptional.

Such experiences are the ingredients to life.

Emily Snell, our featured writer, has a passion for storytelling and an insatiable hunger for the rush of the unfamiliar. Her blog, A One Woman Ticket, focuses not only on the destination but on the journey we as individuals take.