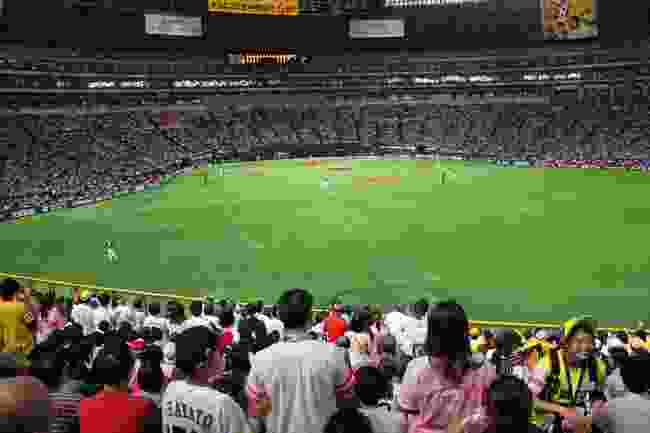 It’s amazing what the trajectory of a small white ball can do to a full stadium of 38,000 people. No sooner had local hero Kenta Imamiya walloped a baseball through the Fukuoka night and into the home crowd than the volume, hitherto an expectant burble, became raucous.

Listen to this article... 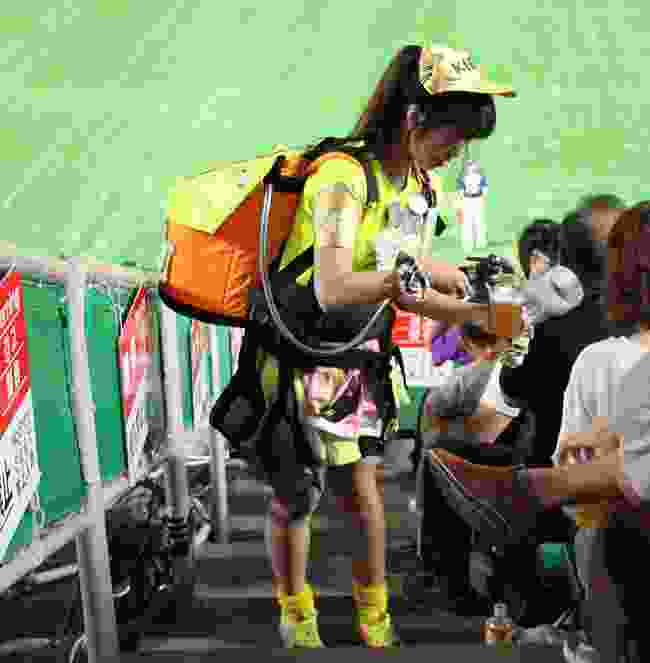 Japan has long had a love affair with the American sport of baseball, but the northern shore metropolis of Fukuoka – home to the SoftBank Hawks, the country’s top team – makes a particularly natural cradle for an overseas cultural import.

As the largest city on the southern island of Kyushu, Fukuoka served for centuries as the nation’s gateway to and from China and Korea, providing an entry point for everything from Buddhism to green tea.

It’s also close to Tanegashima, where the country had its first contact with the West, when Portuguese sailors emerged over the horizon in 1543.

Kyushu is full of similar stories, however few visitors to Japan come here to learn them. This green, tradition-heavy, semi-tropical region gets overlooked by international travellers who, after soaking up the riches of Tokyo, Kyoto and Osaka on the central island of Honshu, more commonly turn their gaze towards Hokkaido, the northernmost of Japan’s main islands.

I wanted to see the rewards that could be had from catching the bullet train to the opposite end of the country... 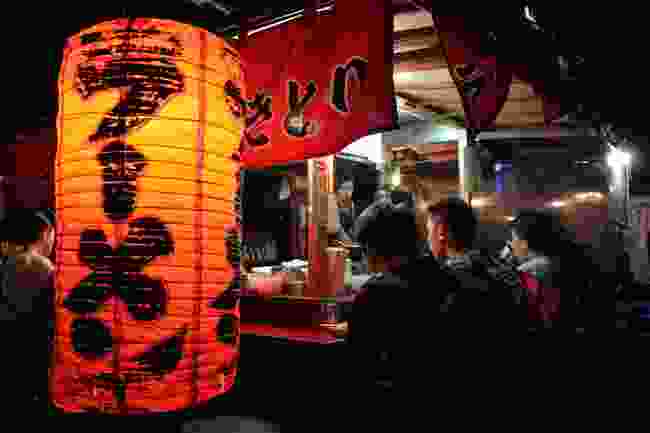 “It’s more relaxed in Kyushu. The weather’s warmer too,” smiled former Tokyo businessman Takeru Nakamura, who I met on a riverside stool at one of Fukuoka’s many open-air yatai (food stalls) on my first evening in the city. He was drinking neat shochu, the distilled barley spirit ubiquitous in this part of Japan. A drowsy May heat lay over the city streets.

“In Tokyo, we always walk on the left. The people coming towards you walk on the left too, so no one obstructs anyone. Here, people walk wherever they want.” He laughed.

Connected to Honshu by the Kanmon bridge, Kyushu hangs off the bottom of the Japanese map like a morsel dangling from a ramen spoon. It’s also roughly the same size as Taiwan, so my travel plans needed to be focused. 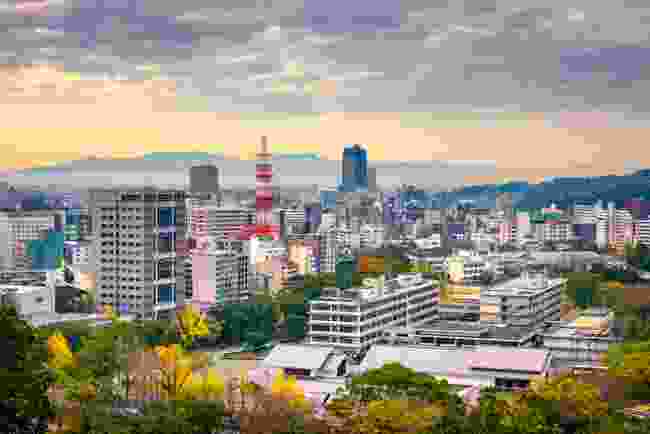 Over eight days, I would be making a circuit of sorts around the north of the island. From Fukuoka I’d be heading south to the hill-ringed thermal town of Unzen, then crossing the Ariake Sea to the city of Kumamoto. After this I’d then travel inland as far as the gargantuan volcanic caldera of Aso, before returning north.

First impressions were of a lively city low on tourist crowds but high on character. I stared up at glossy towers. I wandered ancient temples and bamboo-shrouded shrines. I passed dogs dressed in t-shirts and teenagers wearing collars. I decided against trying the local speciality of raw chicken sashimi, a dish so risky that waiters are obliged to take it away if it’s not eaten within minutes.

“I got lost in an amusement arcade and passed glossy towers, ancient temples, dogs in t-shirts... and a toilet seat lid that opened as I walked up to it.” 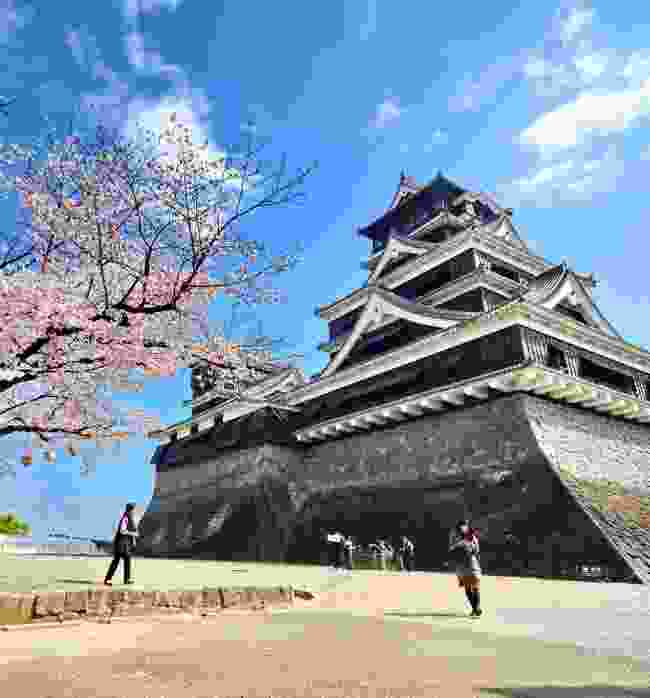 I got lost in an amusement arcade, then had five people surrounding me politely trying to explain the concept of a hedgehog café and encountered a toilet seat lid that opened as I walked up to it. Welcome to Japan.

Fukuoka hosted a meeting of G20 finance ministers in June 2019, which says plenty about the city’s ongoing importance, but I’d wager that the globe’s number-crunchers missed out on what might just be the perfect Fukuoka afternoon.

“OK. Here’s my suggestion,” said the receptionist at the futuristic And Hostel. “Have ramen at Ichiran, ‘I passed glossy towers, ancient temples, dogs in t-shirts and a toilet seat lid that opened as I walked up to it’ take a walk in Ohori Park, then go see a baseball game.”

I followed her advice and was glad I did. Ichiran was a restaurant with individual ramen booths – all the better to appreciate the city’s signature garlicky pork-bone broth – while Ohori Park was a sun-dazed spread of lakes, cyclists and waterside musicians.

And the baseball, with its unique customs and energetic atmosphere, was a completely different experience to watching a game in America. 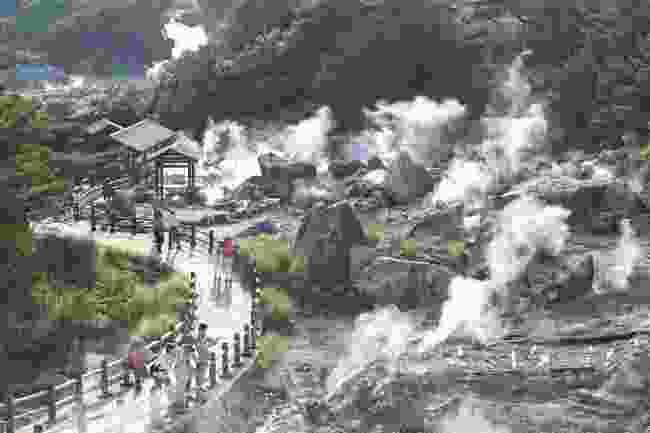 In the 1620s, when the remote resort of Unzen was little more than a Buddhist monastery surrounded by mineral springs, the authorities saw fit to bring suspected Christians here and condemn them to terrifying deaths in the boiling thermal waters.

Today, a group of 20 local pilgrims had come to pay their respects. A Japanese rendition of ‘Amazing Grace’ drifted through the quiet, sulphurous air. The hymn swirled around the hills while the pools in front of me bubbled and burped. Modern-day Unzen prioritises earthly pleasures over spiritual fulfilment, with dozens of (nonlethal) onsen hot springs and some superb hiking trails. The little town sits a few rural hours south of Fukuoka – courtesy of a train then a local bus, both unerringly punctual – and has carved a reputation as a classy, almost alpine retreat.

On disembarking the bus, however, the sight that greeted me was one of steam-clouds hissing out of white clay flats. They call this thermal area Unzen Jigoku, translated as ‘Unzen Hell’ – but trust me when I say it’s only lucky devils that end up here. “Come, come, see!” The old man beckoned. I was making the long, wooded climb from the town centre to the 1,359m volcanic summit of Fugendake, one of the highest peaks in the area.

The day was hot and I’d just encountered an ageing hiker walking the other way. He stopped me, established where I was from, then led me back the way he’d come, stopping a minute later to point out a clump of golden flowers. We stood and admired them together. Then he rested his hand on my shoulder, smiled and walked back downhill. 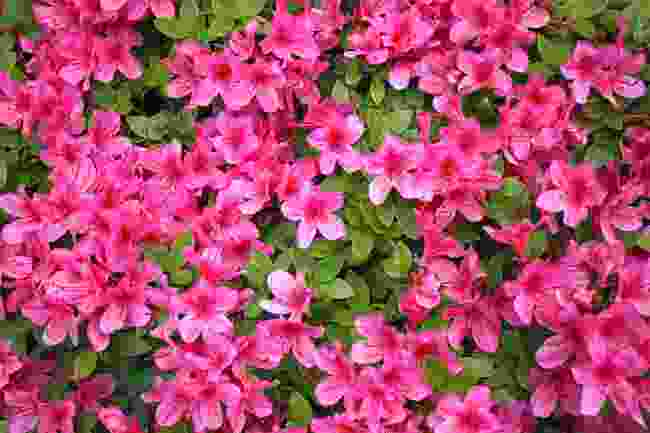 The flowers were pretty, five-petalled affairs I didn’t recognise, and turned out to be the simplest of precursors to the floral bonanza to come. When the upper slopes of the mountain appeared, they were smothered in bright rhododendron. Pink drifts of flowers spread across the hillside, a breathtaking rampage of seasonal colour. Locals stood among them, taking snaps.

Far below, a panorama of bays and islands furled out to the horizon. I scrambled on through this rose-tinted dreamscape, soaked in sweat. The top gave a grandstand view of the neighbouring peak, the jagged and slightly taller Heisei Shinzan, which became the country’s newest mountain when Fugendake erupted in 1990 and belched a brand new peak into being. It seemed quintessentially Japanese, somehow, that even the natural world here had the power to update itself.

Back in town, I wallowed in the old-world onsen at the Unzen Kanko Hotel, a regional take on a chalet-style mountain lodge. The hotel had a billiard lounge, a library and dining room seemingly teleported straight from Switzerland. There were far too many tell-tale signs for the hotel to appear authentically European, however, not least when dinner was served. Dish followed bowl followed plate followed dish. It highlighted an unavoidable but deeply enjoyable local truism: in Japan, there’s always another course on its way. 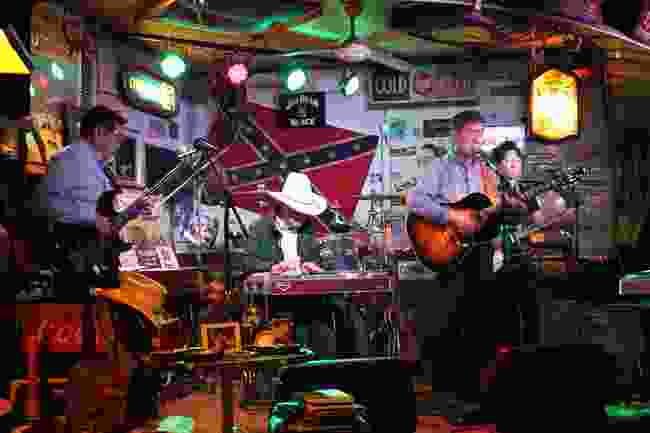 Seiya Nagatini poured me a generous whisky and said the band would be on any second. The musicians appeared in tasselled cowboy chaps, nodded to the crowd and launched into a Johnny Cash song. I’d been in Kumamoto’s Good Time Charlie bar for less than five minutes, but it was already clear it was quite the place.

“Dad’s in Nashville,” explained Seiya. His father, Charlie Nagatini, is the local country and western musician who founded the bar and – when he’s in town – still plays here nightly. The bar sits just metres away from Shimotori Arcade, the long covered shopping street that serves as the city’s vena cava. “Kumamoto’s a cool place,” said Seiya. “It’s not a big city, but we’re proud of it.”

My trip here from Unzen nearly had to be postponed. I’d stopped off at Shimabara, a port town of old samurai residences, with roadside water channels so clean they keep koi carp in them. However, this meant that I’d cut it a bit fine to make the hour-long ferry across the Ariake Sea that I’d had to dash through the terminal with an escort. In a land of precise timetables, no boat was going to wait. I was relieved to make it to Kumamoto, not least because it gave me the chance to visit the city’s famous castle. 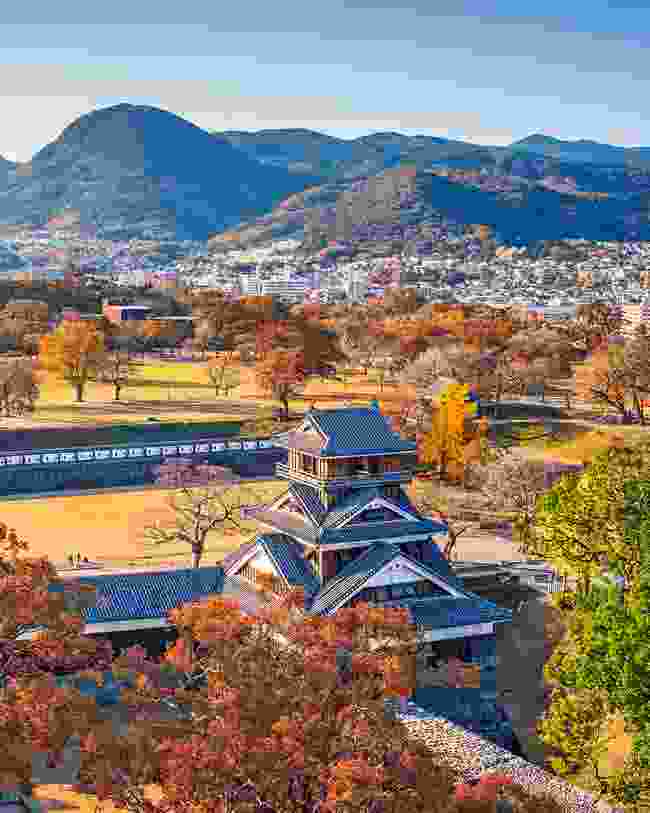 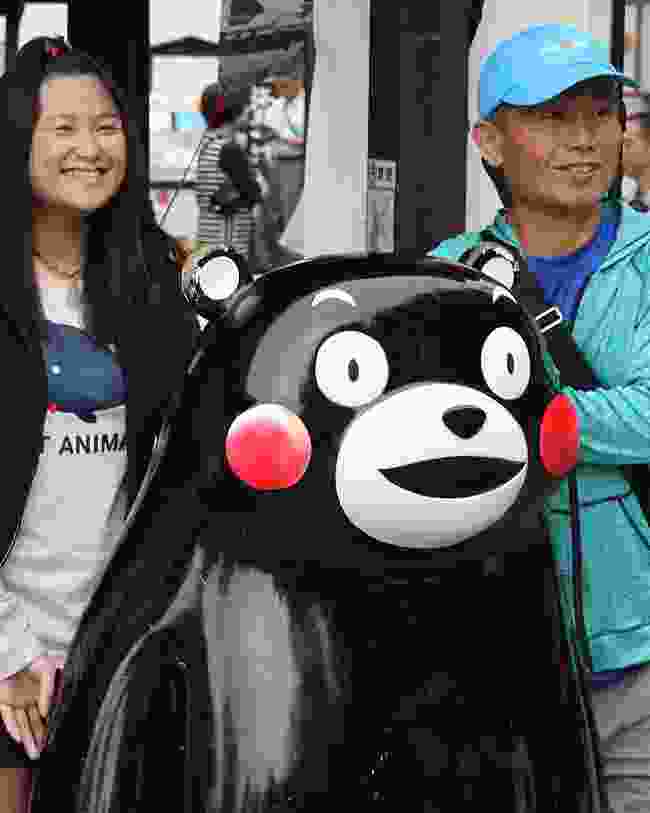 Originally built in the mid-1400s, the fortress subsequently played a pivotal role in the Satsuma Rebellion in 1877, when disgruntled samurai rose up against the new imperial government.

Legend has it that the tatami mats in the castle were made of dried vegetable stalks, to help those trapped inside in the event of a siege. More certain is the fact that in 2016, a major earthquake forced much of the castle to collapse.

“We’re using AI to reconstruct it. It tells us which piece of masonry goes where,” one of the staff at the visitor centre told me. The main tower is expected to be restored by 2020, although the overall site is working towards a restoration date of 2036. You suspect they’ll meet this time frame to the minute.

You can’t move in this part of the island without seeing images of the red-cheeked bear, Kumamon. Initially created to generate tourist interest in 2010, the official prefecture mascot instead quickly becoming a national phenomenon. Kumamon’s wide-eyed smile has reportedly generated hundreds of billions of yen for the region.

The bear’s face loomed out from karaoke bars, ice-cream stands and road bridges. It was also plastered all over the bus that took me through a tapestry of green rice paddies to Aso, my final port of call before making my way back north. 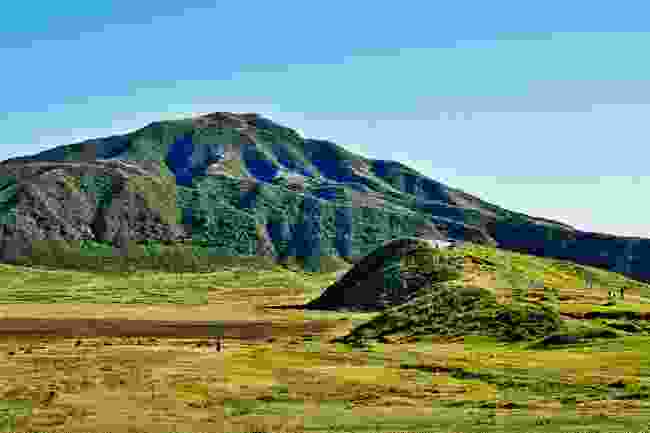 In a country where natural wonders come along like buses, it takes something special to stand out. Aso does just that. Originally a gargantuan volcano that made Mount Fuji look petite, it blew itself to pieces about 90,000 years ago, resulting in a 25km-wide caldera that now contains a scattering of small settlements. Whether it’s geological disruptions or foreign imports, Kyushu eventually absorbs them, makes them its own.

I was staying inside the caldera at Sozankyo Ryokan – all minimalist futons, soft kimonos and artful meals. The contrast between the zen indoors and the magma-formed crater outside was pronounced. The volcano is not yet dormant and a recent subterranean rumble, in fact, meant that the main active peak, Nakadake, was off limits.

Instead, I hiked up Eboshidake. From its grassy summit, the view had the feel of a centuries-old Japanese scroll painting. It was every bit as deserving of the ecstatic roar of the 38,000 baseball fans that had lifted the Fukuoka Dome’s rafters on my first night. Instead the only noise was the warblers singing, and I was sharing the scenery with a solitary pair of fox cubs who were play-tumbling on the slopes.

My journey around this island of volcanoes, scenery and samurai history had ushered me deeper into Japan’s dense cultural thicket and, standing on Eboshidake, I didn’t want to disentangle myself from it. Kyushu knocks it out of the park, just as surely as Kenta Imamiya does.

The trip includes time in Fukuoka, Unzen, Kumamoto and the Aso caldera, and takes in other Kyushu highlights such as Nagasaki, Kagoshima and Yakushima Island.

Costing £2,990 per person, this includes all accommodation and transport across Japan, but not international flights.

The Wanderlust guide to travelling around Kyushu