The island of Kyushu is perfect for walkers, wildlife-seekers and relaxers. Climb volcanoes, spot rare species on Yakushima and sprawl on white sand beaches. Beautiful Kyushu truly has it all...

Forested mountains, white-sand beaches, quaint Dutch villages and secret Christian heritage sites: this might not sound like a place in Japan, but then Kyushu isn’t like other places. This large, mountainous island in the south of the country, made up of six regions or ‘prefectures’, is a subtropical mix of Japanese tradition and rural culture, dotted with steaming volcanoes, hot spring baths and coasts pricked with palm trees. The countryside is alive with the songs of cicadas, while the cities ring with cries of irasshaimase (‘welcome!’). Here are six reasons why you need to visit Kyushu.

1: Climb some of the most active volcanoes in the world 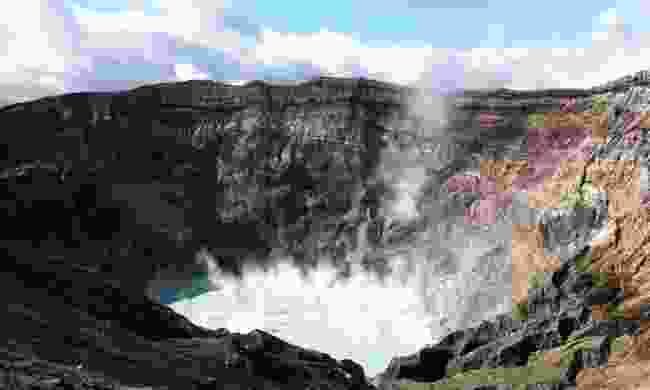 Across the island, volcanoes bubble and smoke like giant witches’ cauldrons. Mount Aso, in Kumamoto, is not only amongst the most active volcanoes in the world, it also has one of the largest calderas — over 11 miles wide — formed thousands of years ago when the volcano collapsed in on itself. In the centre stands the active volcanic peaks, including the colossal Mount Nakadake. When the volcanic gasses aren’t too potent, you can hike to the summit (or ride the ropeway) and peer into its smoking 600-metre-wide crater.

You should also visit Mount Sakurajima in the south. This cone-shaped volcano is the backdrop to the city of Kagoshima and surrounding ocean. It smokes constantly, with tiny eruptions taking place nearly every day, which is why Kagoshima is often cloaked in ash. One of the best places to catch the volcanic display is the free hot spring foot baths in Sakurajima Yougan Park, where you can sit down next to a stranger, roll up your jeans and enjoy the show.

2: The island has a rich and unusual history 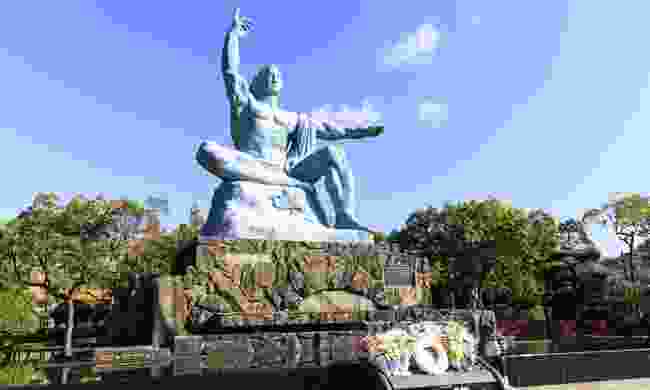 Nagasaki Peace Park is a park located in Nagasaki, Japan, commemorating the atomic bombing of the city on August 9, 1945 during World War II (Dreamstime)

From the atomic bomb memorial park in Nagasaki, decorated in colourful paper cranes, to the hauntingly beautiful deserted island of Gunkanjima, featured in James Bond’s Skyfall, Kyushu has a library’s worth of history to explore. One of the island’s most unique quirks is the influence from the Netherlands, which began in the 1600s when the Japanese exiled all foreigners but the Dutch. Visit the picturesque Dutch port village of Nagasaki’s Dejima to explore Japan’s only trade connection to the outside world for over 200 years. Also don’t miss the fantastical Dutch theme park, Huis Ten Bosch, full of white-knuckle rides, tulip fields and manga characters.

During the 1600s, Christianity also swept through the countryside — something the Edo period leaders fiercely rejected. Christians were forced into hiding, many retreating to the dolphin-watching islands of Amakusa. Today, you can explore the secret heritage sites that dot the countryside, from cathedrals tucked into hillsides to old churches among the rice fields, now protected under UNESCO World Heritage.

3: Escape from the bustle of the big city 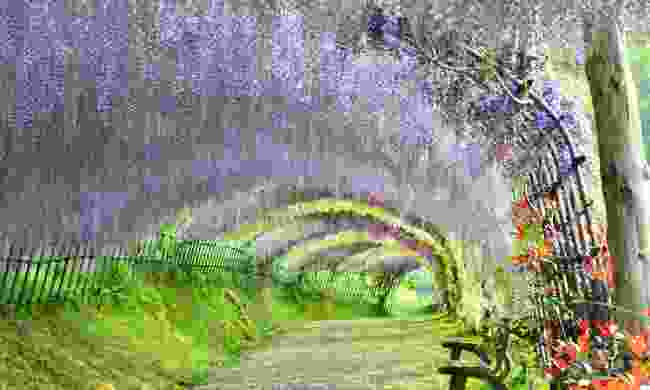 The rural Kyushu landscapes feel a world away from the neon city lights, dotted with bamboo groves, cherry blossoms, wisteria and maple trees. At Kawachi Fuji-en gardens, in Kitakyushu, you can walk for miles in these poetic landscapes. In spring, the garden is known for the 100-metre-long tunnels of wisteria that tumble down like purple waterfalls. Equally magical (and much quieter) is the autumn foliage, when the leaves turn a staggering array of reds and oranges.

You should also visit Takachiho gorge in Miyazaki, a lush gorge with sheer scaled cliffs on either side, punctuated by a small number of waterfalls. Rowing a boat through the narrow chasm is almost a rite of passage, the waterfalls thundering around you.  Nearby is the shrine of Amana Yasukawara, set beside a rocky white river. For years people have made the pilgrimage to this religious ‘power spot’, marking their visit with thousands of stones stacks that carpet the floor.

4: The culinary scene is packed with specialised local dishes 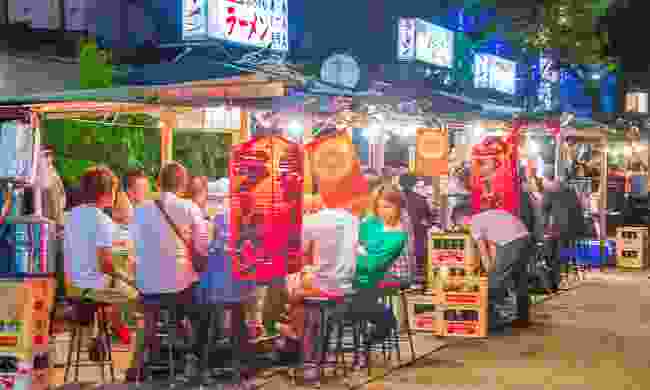 Fukuoka, the largest city on the island, is well-known for its open-air yatai food stands. These are a rare treat in Japan, where street food culture is less prevalent than in the rest of Asia. Each yatai can seat around eight people on bar stools, letting you to watch the chef cook up classic dishes, from the famous Hakata ramen, made from a rich pork bone broth, to grilled yakitori chicken. With plenty of cold beer flowing, yatai are a great place to make friends with the locals.

Kyushu is also known for other Japanese favourites, including the popular chicken nanban (deep-fried chicken with a tartare-like sauce) and breaded pork tonkatsu. In fact, the pork from Kagoshima, in the south of Kyushu, is said to be some of the tastiest in the world, reared from their famous black pigs. Nagashi somen, which you can try in Takachiho, is another popular choice, where you have to catch noodles that whiz past you in fast flowing water using chopsticks.

5: There are entire towns dedicated to hot spring bathing 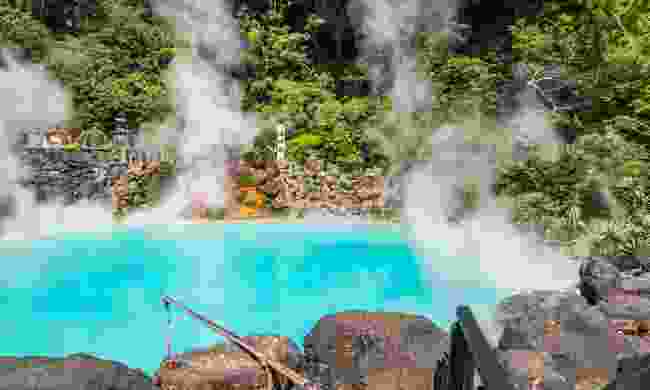 Kyushu is a bubbling cauldron of geothermal activity, which makes the onsen (hot spring baths) some of the best in Japan. Kyushu is particularly famous for onsen towns, where you don a traditional yukata and spend the day wandering from bathhouse to bathhouse. At Kurokawa Onsen, tucked into the mountains of Kumamoto, it feels like you’ve stepped back in time: wood and stone buildings dot the valley, with traditional water wheels, rivers and ancient trees. Many of the baths are outside, so you can relax in the brisk mountain air as the steam rises around you.

On the coast of Oita lies the town of Beppu, which produces more hot water than any other place in Japan. Here, the bathing options are unrivalled: you can try hot spring baths, mud baths, and even get buried up to your neck in piping hot sand. Also don’t miss Yufuin, just a short drive inland on a river basin circled by mountains. When you’ve finished bathing, this quaint town has trendy cafés, boutiques and galleries to explore.

6: There are subtropical islands dotted with rare species 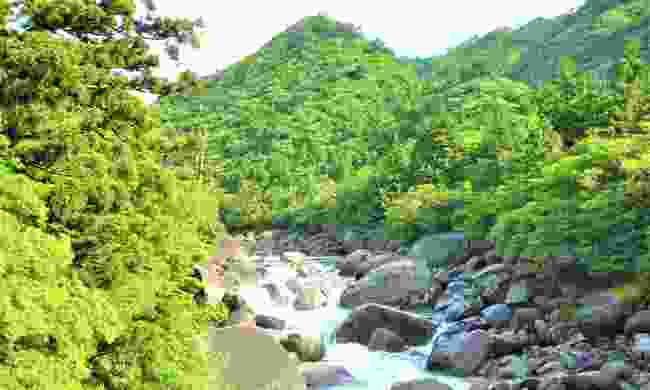 The small island of Yakushima (Dreamstime)

An hours’ boat ride off the southern coast of Kyushu is the small island of Yakushima: an otherworldly mix of misty mountains, sandy beaches and traditional Japanese culture. This was the island that inspired the famous Studio Ghibli director Hayao Miyazaki, who brought to life Yakushima’s mossy rocks and twisted tree roots. Turtles hatch on the water’s edge, deer and monkeys roam freely, and colourful fish swim just off shore.

A little further to the south is the archipelago of Amami, a string of islands that separate Kyushu from its white-sand neighbour, Okinawa. The largest of the islands, Amami-Oshima, is covered in sandy beaches ringed with rainbows of coral reefs. The rainforests and mangroves are home to all kinds of rare, endemic species, including the Amami rabbit.

From April to October, Finnair operates flights from London to Fukuoka via Helsinki. Alternatively, you can fly to Tokyo and transfer to any of Kyushu’s prefectural airports. You can also use the Japan Rail Pass to catch the five-hour bullet train from Tokyo to Fukuoka.

Kyushu is best during spring and autumn, when the scenery is at its most colourful, though August unveils an array of local summer festivals. In the winter, enjoy views of the snow-covered mountains while you bathe in the onsens. In 2019, three of the 12 Rugby World Cup venues are being hosted Kyushu; Fukuoka, Kumamoto and Oita, from September to the start of November.