The culinary landscape is hugely diverse, too, from the sandy shores of the Black Sea, to the high peaks of the Carpathian Mountains, and the rolling hills of Transylvania.

The style of cooking is based around two main seasons. The first belongs to the hot summers and quick flavours, with pan-frying and grilling of meat, fish or vegetables served alongside crisp salads and juicy tomatoes. The second is the autumn-winter style of slow flavours, turning to hearty stews and fluffy dumplings, comforting roasts and desserts.

One of the main ingredients that makes a meal special is the famous Romanian hospitality. Home-cooked meals, made with love and following family recipes, is one of the best ways of experiencing Romanian cuisine.

Guests will be served a belt-bursting number of dishes and traditionally offered ‘seconds’, with lunches often continuing into dinners.

Here's a selection of the flavours, textures and fragrances that help define Romanian cuisine... Cornmeal was introduced by the Ottoman Empire, which ruled for centuries over different parts of today’s Romania. It became so popular that it defines some of the staple dishes of this cuisine.

The Romanian ‘full English’ is a creamy polenta, made of ground cornmeal and cooked with local cheese and topped with fried eggs. It's a sunny breakfast whatever the weather.

In the countryside, it is believed that a very thin cornmeal porridge, topped with diced butter and poured into a mug, works wonders against flu or blue days. When the gardens overflow with ripe vegetables, a quick way to prepare them and enjoy their flavour is to make fritters. Courgette fritters are the most popular and people often make them on a whim as a quick lunch.

The garlic vinaigrette poured over them before serving is also much loved. It's called mujdei, and is a staple ingredient in many dishes, from starters and soups to main courses.

The combination of this garlic sauce with vegetables, whether fried or simmered, is the basis of many dishes, especially during Lent days, which cover almost half of the year. In late summer, this classic duo is served at the beginning of every meal with slices of good bread and often accompanied by a shot of strong plum brandy.

The aubergines are highly seasonal, and the dip is prepared during the weeks of late summer and early autumn. Some people even freeze it for the winter.

The silkiness and mellow flavours of the aubergines are lifted by the tanginess of the garlic vinaigrette in which the peppers are soaked. These are two of the simplest and most delicious dishes of Romanian cuisine. A famous Romanian ingredient, giving its name to a whole category of clear and tangy broths. The juice is made by fermenting wheat bran, often on its own or together with cornmeal, bread and herbs.

The liquid is then added to clear meat or vegetable broth. Any broth like this is hence called a borș, but it’s not the beetroot dish that you would expect in other eastern European countries.

The Romanian borș as an ingredient has just the right hint of tanginess and sweetness, being pale green in colour with golden reflections.

Needless to say, its health benefits are right up there with the likes of kombucha, kimchi and miso. Traditionally, sarmale are made with sauerkraut leaves, but there are seasonal versions using vine, horseradish, linden or acacia leaves filled with sticky rice and sultanas, or even fish.

Making it is a family and social activity, and a family of four may make up to 200 sarmale for the holidays.

Many Romanians have their own special recipe, passed down by their mums and grandmas, making it very personal. Cozonac is traditional Romanian celebration bread – richer than a brioche, loaded with a rum-spiked walnut filling.

This bread is baked for Christmas, similar to panettone, and people like to drink a glass of warm milk with it.

In spring, cozonac is baked on the last Thursday before Easter Sunday, creating wonderful aromas in every house and bakery, and making your day feel glorious as you stroll through the alleys. The ultimate comfort dessert – exuberant and rustic, they are the great big ending to any Romanian meal. People jokingly say that they are a bit like life: sweet, sour, round and imperfect.

The doughnuts must be light and not too sweet, since most of the sweetness comes from the jam. The dollops of jam and crème fraîche are generous.

In Romanian restaurants, they are served in pairs. Delicious. 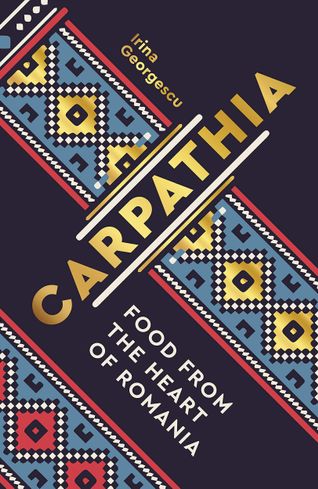 Irina Georgescu is a Romanian food writer who has been living in the UK for the last 10 years, and the woman behind the hugely successful blog, Life in Small Bites.

Her latest book, Carpathia: Food from the Heart of Romania, features recipes inspired by her mother, family and Romania's culinary heritage. It is illustrated with stunning photographs by Jamie Orlando Smith.

You can order your copy from all good books stores, including Amazon, now.

More guides to fabulous cuisines from around the world: