Hearty, delicious and made from the freshest ingredients, Armenian cuisine has borrowed the flavours of traders and conquerors to create a unique taste of its own...

Located at the crossroads of Asia and Europe, Armenia’s cuisine has been influenced by traders and conquers from the Mediterranean, Middle East and Eastern Europe.

It makes use of the freshest ingredients – Armenian fruit and vegetables are legendary throughout the region – and all kinds of spices, herbs, meat and fish.

Eating is an integral part of life in Armenia. Locals will find any excuse to have a feast, so don’t be surprised to be dragged into a family home as a guest of honour, enjoying a delicious meal made from recipes passed down from generation to generation.

And while some of the dishes may seem familiar (tabbouleh, dolma and kebab are staples), each has a distinctly Armenian twist. Just don’t expect your cook to reveal their secret ingredients too readily.

Here are the Armenian dishes you absolutely must try... 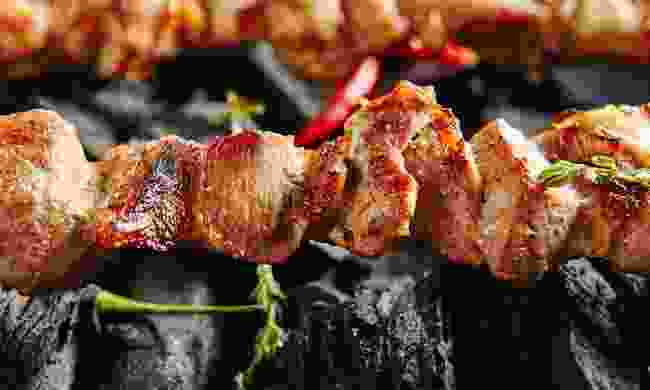 Khorovats on the grill (Shutterstock)

Khorovats are the Armenian take on a kebab, an inescapable part of dining in the country. In restaurants and in truck stops, on street corners and in family homes, you’ll find charcoal manghals (grills) and a man turning skewers loaded with huge chunks of meat over an open flame.

Pork, lamb and beef are the preferred cuts of meat and there is little marinading or seasoning. Armenians believe condiments detract from the natural flavours of the meat. And while you may sometimes see peppers and onions on the skewers, they are there purely for decoration.

The ‘greens’ come with the salad that accompanies every khorovats, made from fried tomatoes, eggplants, peppers, greens and onion. Wrap it all up in lavash, the delicious local flat bread, and experience a simple foodie delight. 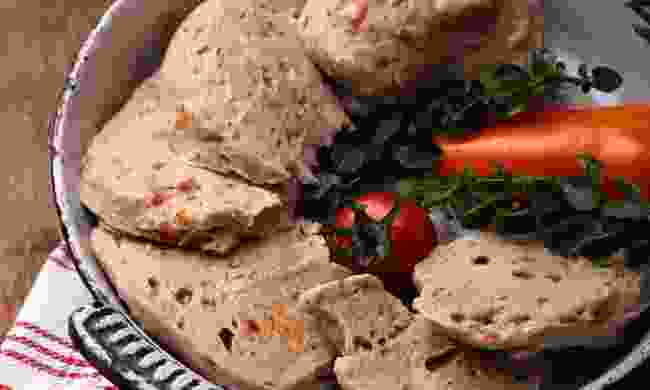 Kyufta, sliced and ready to be eaten (Shutterstock)

Every Middle Eastern country has their take on the classic kofta, but nothing comes close to the Armenian version.

Like its near east cousins, minced meat is lightly spiced and mixed with crushed wheat and onions. They're also rolled into a tapered spinning top shape. But instead of being grilled, Armenians cook them in a broth.

A simple chicken broth is usually used, with that little bit of Armenian zing created by a dash of pomegranate molasses and brown sugar. Well flavoured and rich, kyufta are served sliced with a squeeze of lemon juice. 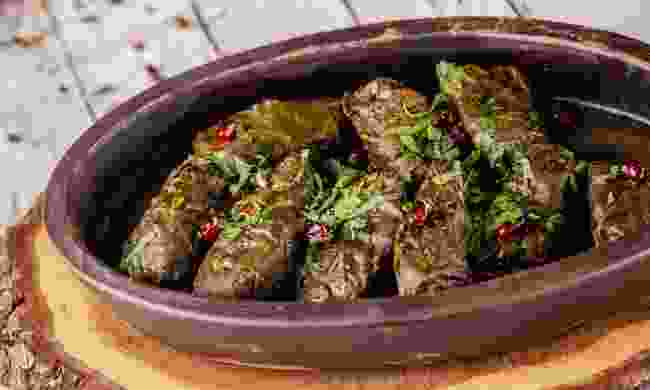 Pronounced ‘tolma’ in Armenia, dolma is another dish you may recognise and think you know. Made from a mix of minced meat, onion, rice, and various spices, all wrapped up in a vine leaf, they are a staple across the eastern Mediterranean. But there’s something different about the Armenia dolma – both on how they are prepared and in the ingredients used.

Every Armenian grandmother has their own dolma recipe, but all agree that the key is in how you prepare the leaves. The key is to remove them from boiling water as soon as they change colour.

Keep an eye out for the special dolma produced especially for Easter. The ingredients are largely the same, but the vine leaves are replaced with cabbage leaves. 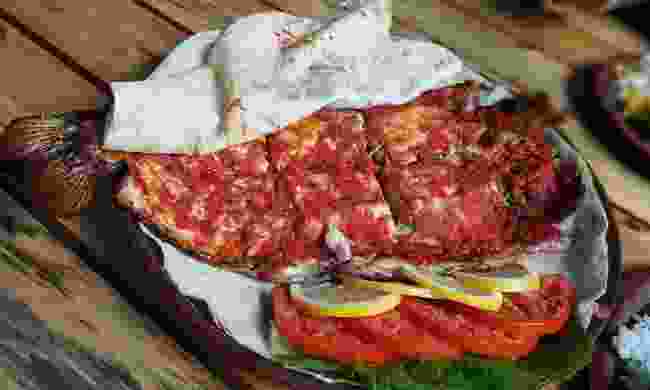 Armenia may be a landlocked country, but it still boasts its fair share of fishes dishes. The most famous is Ishkhan, based on a particular type of trout found in Lake Sevan.

The trout of Sevan are ‘meatier’ than most and, such was their fame, they were being exported across the region as early as the 15th century.

Ishkhan can be prepared in an infinite number of ways. You can order it be boiled, fried or braised with almonds. The most famous dish sees the fish cooked in wine and seasoned with basil, tarragon, chives and pepper.

It is also delicious stuffed with local hazelnuts or apricots. Such is the popularity of Sevan trout, locals drive from Yerevan especially to eat it, dining in family run restaurants overlooking the lake. 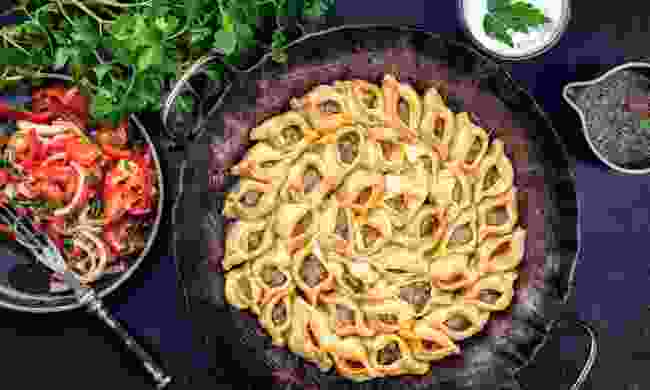 Manti about to be eaten (Shutterstock)

Ask any member of Armenia’s widespread diaspora what dish they miss most from home and the answer is unanimous: manti, delicious baked dumplings served in tomato sauce with a garlicky yoghurt on the side.

It’s not just the taste they miss. It is arguably Armenia’s most sociable meal. Baked until crisp, eager hands will be snapping off the thumb-sized dumplings and dipping them in yoghurt almost as soon as the dish is plonked on the table.

There are some variations. Some like the tomato sauce spicy. Others like their yoghurt less garlicky. Manti may have originated in Western Armenia, but it is much-loved across the country. 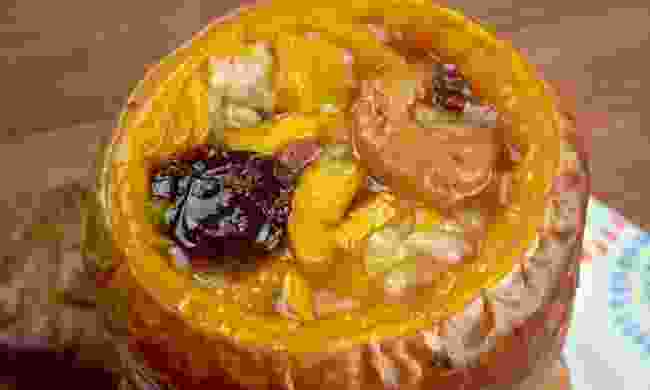 A delicious moorish dish from southern Armenia, ghapama is so beloved throughout the country that it has its very own song – Hey Jan Ghapama – extolling its delicious taste and fragrance.

Basically, it's a butternut pumpkin, scooped out and stuffed with rice and dried fruits. It's a real winter warmer and easily the most popular vegetarian dish in the country.

A mix of dried fruit can be used in the stuffing, including apples, prunes and plums. This being Armenia, apricots are a must. After the stuffing, the pumpkin is baked then cut up and served to eager diners.

Whether or not you have Hey Jan Ghapama playing in the background is entirely up to you. 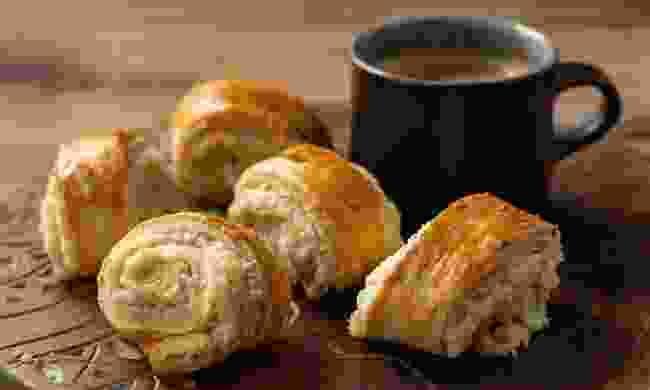 Gata. It’s mere mention is guaranteed to bring a sparkle to any Armenian eyes. A sweet egg-rich, bread-like cake, it is exotic and syrupy and the perfect accompaniment to a thick, dark cup of surj, the industrial strength local coffee.

Gata goes by many names, look out for kada or katah if you cannot spot it on a menu, and varies in shape and size from region to region.

Everyone has their on twist on the classic recipe, too, so don’t be surprised to come across variations in ingredients. One thing never changes though – a well made gata always melts in your mouth.