The UK's best bluebell woods to visit this spring

One of the loveliest British spring sights is a carpet of blooming bluebells. Find out where you can spot them when they flourish, across England, Scotland, Wales and Northern Ireland...

Click to jump to bluebell walks in Northern Ireland

The best bluebell walks in England

Ashenbank Wood comprises ancient woodland with a varied history. During the Second World War, the RAF stationed five camps on site to accommodate personnel stationed at the Gravesend Airfield, with some structures still visible today. Usually there are prolific shows of bluebells scattered across the forest floor from late April for visitors to meander through. As always, be mindful of keeping to established footpaths to avoid trampling the blooms.

Brede High Woods is situated 9.5km north of Hastings in the High Weald Area of Outstanding Natural Beauty. Visitors to Brede compare it to walking through 10 woods on one site. It is special for its rare green hellebores and also for sightings of hobby, woodcock, nightingales and buzzards, glow-worms, great crested newts, lampreys, dormouse, badgers and fallow deer. Usually the best time to see bluebells is from the middle of April to the middle of May.

Set in a 107m gorge on the edge of Grewelthorpe, Hackfall was bought in 1731 by John Aislabie, who was known for his landscaping work at nearby Fountains Abbey and Studley Royal. Following years of decline, the site has been given a new lease of life in the last few decades and now it teems with a thriving range of wild plant communities, including a spectacular spread of bluebells every spring.

Since the Woodland Trust completed its planting programme – during which volunteers planted 600,000 trees – Heartwood Forest is now the largest new native forest in England. The 347 hectare reserve is home to ancient woodland and vast carpets of beautiful bluebells from mid-April to late May.

This is a large expanse of woodland made up from a series of ancient woodland sites. There are two public rights of way and a path leading onto Shaptor Rocks where you can enjoy magnificent views across the local landscape. Bluebells bloom until late May.

Clanger, Picket and Round Woods have been designated a Site of Special Scientific Interest due to its varied butterfly and moth population. Many paths lead into cleared glades where bluebells thrive in spring.

Tattershall Carrs forms the last remaining remnants of ancient, wet, alder-dominated woodland that once ringed the margins of the Fens. The 29-hectare space also boasts a fascinating history – the wood was part of RAF Woodhall Spa during the Second World War, and was home to the famous 617 ‘Dambusters’ squadron.

Warriners Wood, 2.5km south of Kendal, is well known for its roe deer and orange-tip butterflies. As well as bluebells in spring, it has a mix of ash, sycamore and hazel trees.

Costells Wood is a site of ancient woodland and has been designated an area of wildlife importance. Several small ponds are found in the site, alongside an extensive path network. Spring brings bluebells, magnolias and wild orchids.

For a true-blue sight, don't miss the 40 hectares of stream valleys, mature oaks and chestnut trees spread across Danbury Common and Black Heath. Visitors can explore three way-marked trails or do them all in one go. Dotted among the trails are bluebells, primroses, gorse and even yellow archangels. Bring your binoculars and see if you can spot a nightingale or a hawfinch. For avid birdwatchers, make a stop at the Backwarden nature reserve on the south-western edge of Danbury Common.

Credenhill Park Wood is a local landmark with historical and environmental importance, having been designated a Scheduled Ancient Monument and Special Wildlife Site. The tranquil paths among the trees bestow views of small-leaved limes, early purple orchids, fragrant wild garlic and bluebells, particularly in April. The Iron Age hill fort that forms an integral part of the site is one of the largest hill forts in England, and is thought to have been an Iron Age tribal capital.

Prominent on the summits of Duncliffe Hill, just west of Shaftesbury, this large ancient woodland site can be spotted for miles around. A designated site of nature conservation interest, it has a rich mix of woodland species, including what are reported to be the oldest inhabitants of Dorset: a scattering of coppice stools of small-leaved limes. As well as bluebells you can see other wild flowers such as moschatel, yellow archangel, wood speedwell and early-purple orchid.

The best bluebell walks in Scotland

The Woodland Trust's largest wood is described as the Highlands in miniature; Glen Finglas has all the contrasts of mountains and water but on a more intimate scale. Woodland historians believe that Glen Finglas is home to one of the largest collections of ancient trees in Scotland. And, of course, an impressive display of bluebells in late spring. Look out too for kites, pine martens and red squirrels.

One of Scotland's best country parks houses thousands of bluebells every spring. The area has 16km of paths that wind through wooded gorges, wild garlic and past 800-year-old Cadzow oaks. Home to some of the oldest woodland in the country, this is an area in need of exploration. As a beacon for biodiversity, take the time to spot some of Britain’s most spectacular wildlife including otters, bats, badgers and grey wagtails. If the weather turns gloomy (as we know the British weather can) pop in at the Chatelherault hunting lodge and summer house. Originally built in the 1730s, the buildings are now home to exhibitions on local history and wildlife.

Inchcailloch Island is the best spot for bluebells in Loch Lomond & The Trossachs National Park, but you’ll also see carpets of them in and around Dukes Pass, The West Highland Way, Loch Long and Loch Lubnaig. See them at their best in late May.

The best bluebell walks in Wales 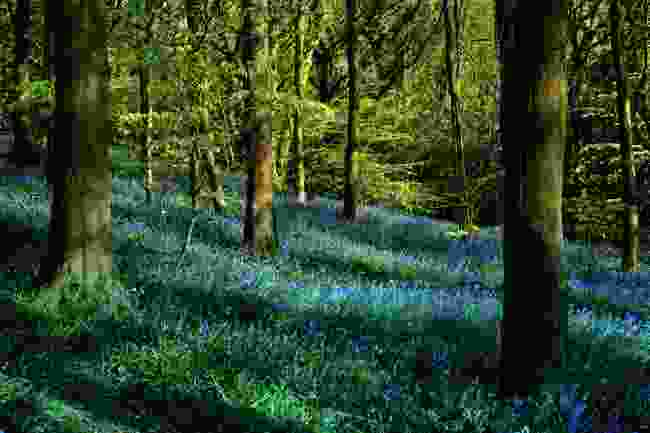 Coed Cefn occupies a hilltop overlooking Crickhowell, a pretty Welsh town which lies 1.5km to the west. Most of the woodland consists of oak and beech, with self-sown ash predominating on the southern side. The woodland floor is dominated by bluebells in April and May.

The Green Castle Woods is a mix of ancient and newly created woodlands, botanically rich meadows and hedgerows provides a haven for wildlife, so look out for butterflies, barn and tawny owls. The Carmarthenshire Coast Long Distance Footpath is routed through the site and fine views can be had over the Afon Tywi and towards Carmarthen. Bluebells bloom from the end of March.

With history dating back more than 2,000 years, Dinefwr Park and Castle is not just a great spot for bluebells. Amble around the Castle Woods to get your fill of blue and then explore the 12th century Welsh castle, home to Lord Rhys – one of the most prosperous Welsh princes.

At the heart of this National Trust Reserve is Newton House and its surrounding 18th century landscaped garden. If you're lucky, you might come across one of the 100 fallow deer in the medieval deer park. If not, the small herd of an old and rare breed of cattle are always a welcome sighting. Newton House, built in 1660 but now with a Gothic façade, has a tea room overlooking the deer park and an exhibition for history buffs wanting to learn more about Dinefwr Castle. 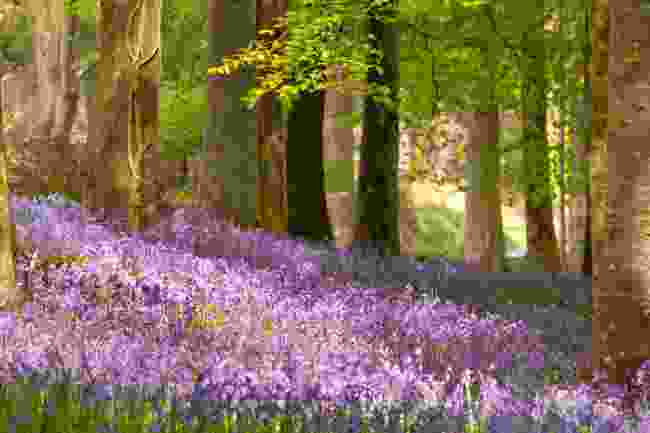 According to the National Trust, nearly half the world’s bluebells are found in the UK – making them rare in the rest of the world. For a dose of lilac, visit this forest park south of Belfast near Newcastle in County Down, where Game of Thrones was filmed. The bluebells bloom for six weeks, from around the middle of April to the end of May.

Prehen Wood sits quietly on the east bank of the River Foyle and, dating back as far as 1600, has seen centuries come and go. Visitors to this area will be overwhelmed by Prehen’s natural beauty. The more privileged visitor may even catch a glimpse of the endangered red squirrel, while bird inhabitants include the sparrowhawk and long-eared owl. Bluebells bloom from around mid April.

Killaloo sits within the beautiful valley of the River Faughan, just 1.5km upstream from Oaks Wood. There are some spectacular oaks, possibly explaining why the rare purple hairstreak butterfly, which is confined to oak wood, has been spotted here. In addition to our well-loved bluebell, keep a look out for some other woodland beauties. Plants such as wood anemone, wood sorrel and wild garlic adorn the ancient woodland; while birds include the sparrowhawk, jay and kingfisher. Paths on the site have recently been upgraded.

Woodland Trust lists over 1,300 woods, and it's the largest database of bluebell woods open to visitors. You can also search for species by month and year on its Nature's Calendar. For more information visit: woodlandtrust.org.uk

7 of the best spring walks in the UK

12 colourful spring scenes from around the world