Greece may not be the first destination that springs to mind when castles are mentioned, but the country is dotted with historical fortifications great and small. Here are some of the most evocative...

This 13th-century Venetian castle defended trade and pilgrimage routes to the Holy Land. The circuit walls, Ottoman modified after the fifteenth century, mostly stand; in 1828 the French bridged the landward moat. A thriving town existed inside until the 1840s, but today little remains visible. Methóni's drama lies in its setting with the sea on three sides, and the photogenic, isolated Boúrtzi tower, accessed by an often wave-lashed causeway – an inadvisable crossing in stormy weather.

This massive pinnacle has been fortified since antiquity, since it controlled overland access to the Peloponnese. So there's an unusually rich mix of monuments within its zig-zagging ramparts, starting with the triple western gateway: the lowest portal Ottoman, the middle one Crusader, and the highest gate Byzantine but incorporating ancient masonry. The busy town inside vanished after the Greek insurgents captured Acrocorinth in 1822, but the ghost of the last Ottoman commander, Kâmil Bey, still haunts the ruins. Angelos Sikelianos began his poem 'On Acrocorinth' The sinking sun set all the Rock aglow... — leaving in the late afternoon, you'll see that he got it just right.

This tiered Venetian citadel, completed in 1714, was capable of defying all contemporary artillery, but the Ottomans captured it in 1715 after a short siege; it was also among the first strongholds taken by Greek insurgents in 1822 during the Greek War of Independence against the Ottoman Empire. There are actually eight autonomous mini-fortresses inside, whose guns could be aimed at each other in case an enemy captured only some. Climb the 900 steps to the top, or cheat by driving up – the views over town, the bay and all of the Argolid are unbeatable, especially on a clear autumn day. 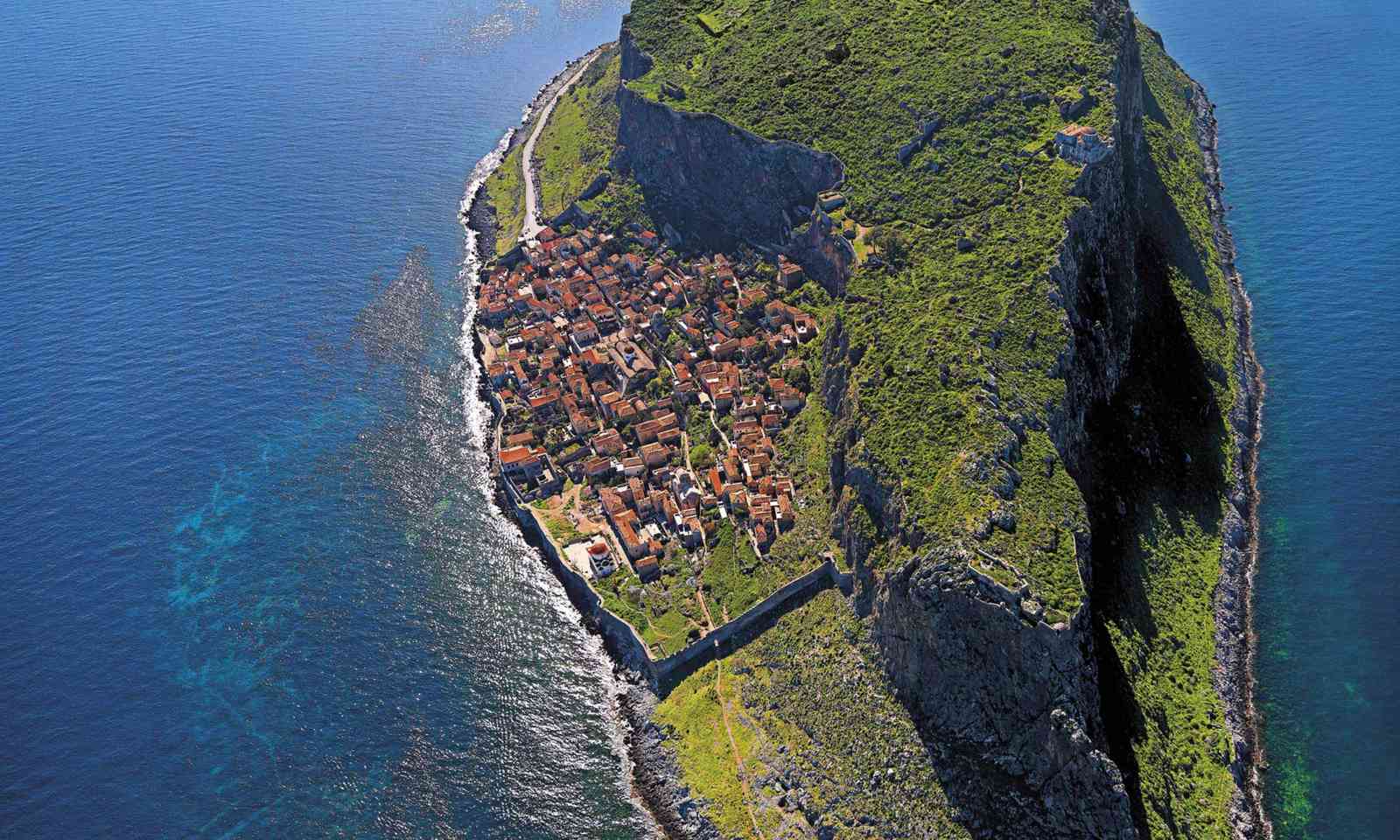 Monemvasia by Region of Peloponnese

The 'Gibraltar of Greece', on the south side of a great monolith protruding from the Peloponnese, began life as a 6th-century Byzantine trading post, then passed to Venice in 1460. Ottoman after 1540, it was their first fortress to fall (August 1821) to the besieging Greek revolutionaries. Tile-roofed, lower-town houses, now tastefully restored, nestle within sea-lapped curtain walls; the upper settlement, with only 13th-century Agía Sofía church still intact, is a steep climb up a stair-street.

From the upper citadel (Tues-Sun 8.30am–3pm), with Byzantine baths and an Ottoman mosque, long Venetian curtain walls swoop down through pines to bracket the mouth of an historic Corinth Gulf port. This was medieval Lepanto; just offshore was fought the eponymous 7 October 1571 battle, when a Christian Hapsburg armada defeated the Ottoman fleet. Climb either rampart at the harbour mouth, then swim at Psáni beach just west.

Ali Pasha (1741-1821) was an Albanian Muslim warlord who ruled northwestern Greece from 1788 until his sticky end. He built this hatbox-like castle, between Ayiá and Anthoússa villages, around 1816 when he seized nearby Párga. Small but perfectly formed by Italian engineers in Ali's employ, it overlooks a grand sweep of the Ionian shore and sea, from Paxí to Lefkáda. The dungeons, upper gallery and roof terrace with rusty cannons are intact and fully accessible, great fun (and safe) for family exploration.

As well as the examples below, look out on the islands for kástra (fortified dwelling complexes). These, where the backs of houses function as a defensive perimeter while their facades face a plaza or narrow lane, were elaborated by the Venetians and Genoese on certain islands. The best examples are the mastic villages of southern Híos, and the Cyclades of Náxos, Antíparos, Sífnos, Páros (Náoussa) and Kímolos. 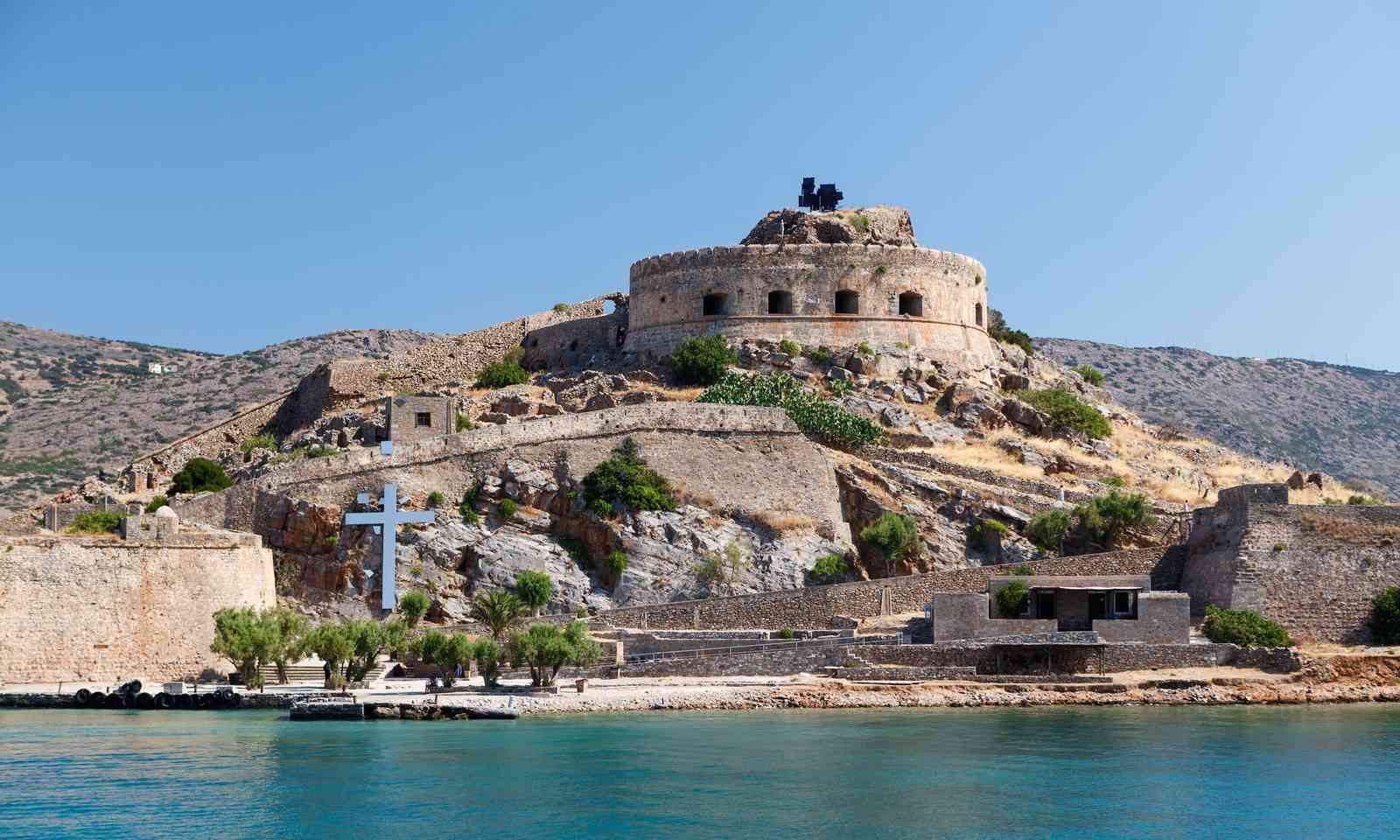 This will likely be familiar thanks to Victoria Hislop's Island, about the era (1903-57) when it sheltered Crete's main leper colony. Spinalónga was one of three offshore citadels retained by the Venetians until 1715, after the 1669 Ottoman conquest of Crete. The colony's marketplace has been tastefully restored by the archaeological service; the rest is derelict. A 'must' boat trip when in the region; frequent, economical departures from Pláka village opposite.

A small, now-forgotten Byzantine fort defended the harbour below, which long ago silted up to form Potámi beach; a steep trail climbs to it from a 10th-century Byzantine church. There's little intact inside other than sluices for a mill; the water would have come from up the valley. Visit in the first third of October when hundreds of white-and-lavender crocuses emerge – one of the Aegean's botanical spectacles.

A sprawling castle – successively done by Byzantines, Genoese and Ottomans – dominates Mýrina, especially when fetchingly illuminated by night. The grounds are home to skittish miniature deer brought from Rhodes, fed by the municipality. One has great views over Romeïkós Gialós district before sunset; on a clear morning, you can spy Mt Áthos, 35 nautical miles to the west. The old fort is a Venetian adaptation of a pre-existing one, and contains a fine Byzantine icons and mosaics museum, plus later British-era buildings. The new fort is Venetian purpose-built (1572–1645), and more architecturally interesting. Both have fine views over the red-tile roofs of the town and beyond over Corfu and Albania.

The crusading Knights of St John Hospitaller endowed most of the Dodecanese with splendid castles, many built atop Byzantine or Genoese foundations. This is among the most spectacularly perched; it's a stiff walk up from Plátanos, the island capital, but well worth it for the little ecclesiastical museum inside and amazing views (best at dusk) over the entire island and the straits with Turkey. 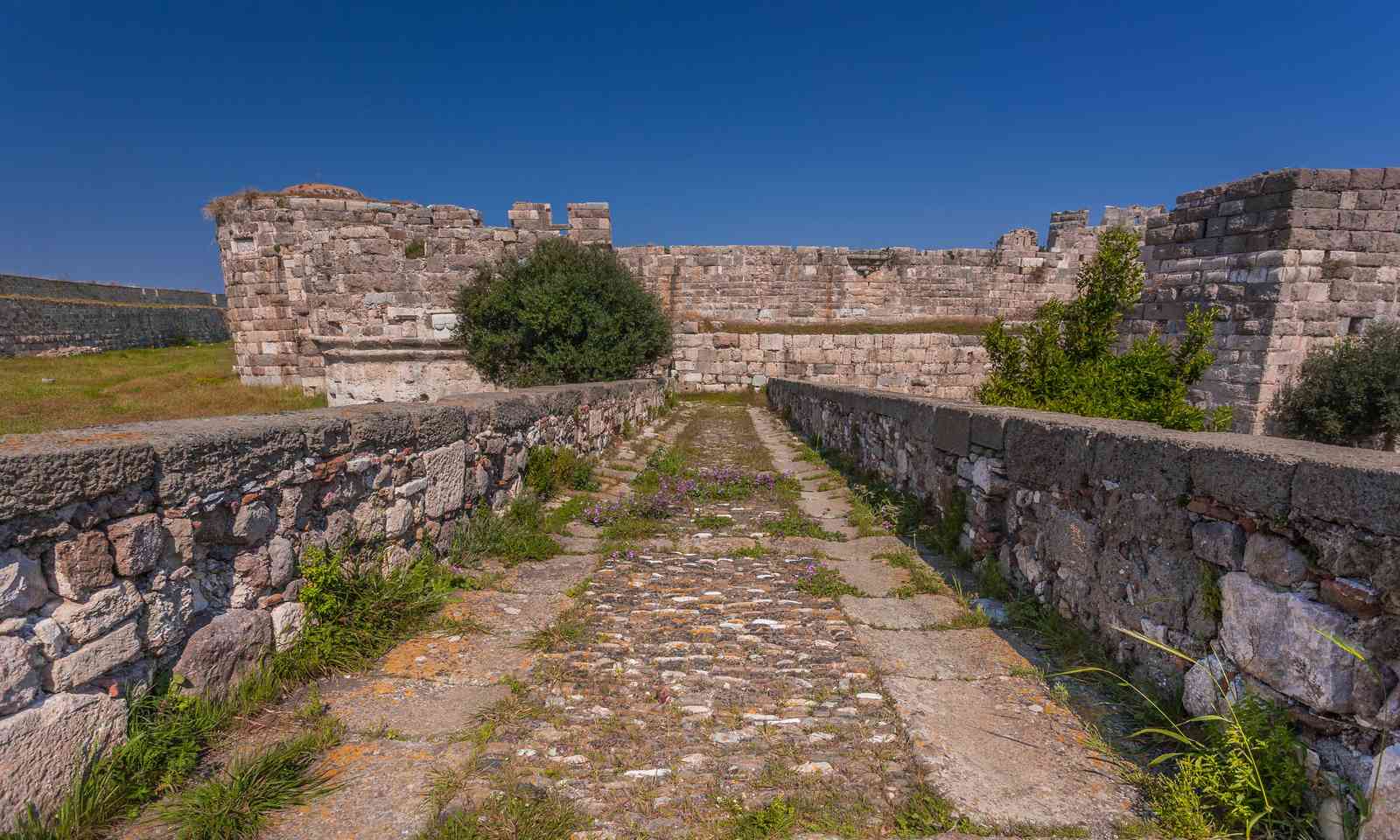 The Castle of the Knights of St John, Nerantziá  Castle (Dreamstime)

The harbour castle of the crusading Knights Hospitaller of St John took its present form 1450-78. Heraldry buffs will be thrilled with the relief escutcheons and inscriptions, both masoned into the walls or lying loose. You can walk the curtain walls and pretty much 'access all areas'.

Péra Kástro is another Dodecanesian Crusader foundation, again built atop pre-existing Byzantine/Genoese fortifications. This pirate-safe refuge above Horió village hosted a sizable town until the late 1700s, but the only structures still preserved are several churches with vivid fresco fragments of the 15th and 16th centuries.

Yet another castle of the Knights Hospitaller, which gave the island its name (a corruption of 'Castello Rosso'). There's a worthwhile historical-folkloric museum (Tues-Sun 8am-3pm) inside. Below the northerly foundations hides Greece's only Lycian-style ancient tomb. A noted engraving of 1836-8, by William Henry Bartlett, shows a ship approaching town and its fort; an original print hangs on my wall but reproductions are readily available.