Think the Greek islands are swarming with tourists? Well, think again! Just don't tell everyone about these beautiful islands... 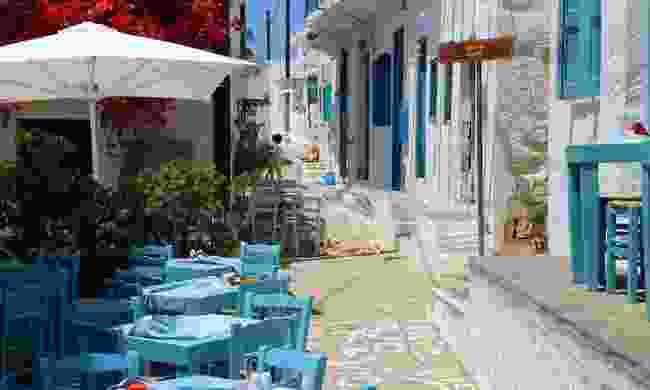 North of larger Mílos, Kímolos is a pretty sleepy islet despite frequent ferry connections from Piraeus and other nearby islands. Barely 800 people live here, and the 450 tourist beds (no big hotels) rarely fill. Most of Kímolos is classed as a nature reserve so cars, although allowed on the island, are not advised as most roads are small and narrow. There is a bus on the island, and a taxi, as well as taxi-boats serving the island's remote beaches.Or walk along its tracks, taking enough food and water. Everything is found on or near the south and east coast: tiny Psáthi port, several beaches between Dékas and Prássa, some farming hamlets, and the dazzlingly whitewashed capital, Horió, whose USP is an anti-pirate kástro (collective fortification), built during the late 1500s. Inside it's derelict but the defensive perimeter of dwellings is intact and partly inhabited. 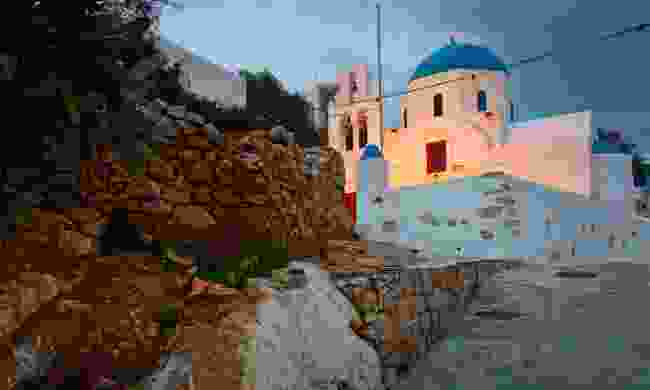 Donoússa is one of the four inhabited small Cyclades Islands, between Náxos and Amorgós, served both by a big overnight ferry from Piraeus and the local ferry Express Skopelitis. Until 1982 none had mains electricity; since then only Koufonísi has hit the touristic big time. Not Donoússa, though mid-summer visitors outnumber the 160 locals concentrated in Stavrós, the port village. They come for idyllic south-coast beaches at Kédros and Livádi, both popular with campers, and to hike the island's extensive trail network, including five signposted trails. Some 20 minutes' walk uphill from Livádi, Mersíni hamlet has two tavernas and a strongly flowing spring nurturing a lush oasis. 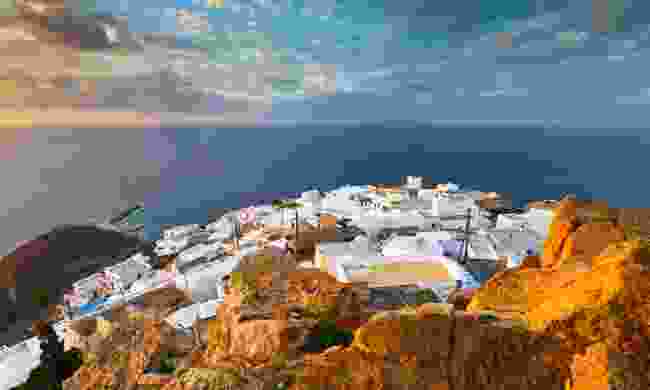 Want an island like Santoríni (just west) without the hussle or the hassle: the same anti-earthquake architecture, the same volcanic soil in places, friendy locals, but at a fraction of the price? Oh, and with rather better beaches? Then, Anáfi is for you.

There's just one hotel; otherwise stay in pensions at the hilltop Hóra and behind Klisídi cove, or camp rough at Roúkounas, one of five other sandy, south-facing beaches. The last, Monastíri, is 2hr 20min walk from Hóra, its name announcing nearby Zoödóhou Pigís monastery, visibly incorporating masonry of an ancient Apollo temple. Here begins the 50-min ascent of Kálamos, the huge limestone mountain forming the eastern end of Anáfi. From the summit monastery of Kalamiótissa (460m/1509ft up), you've the island's finest view. 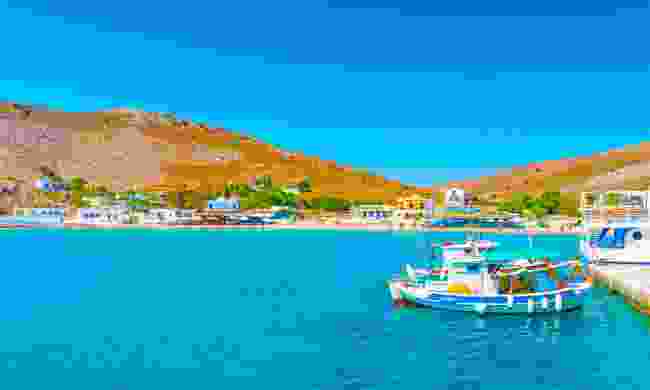 Sitting between Kos and Kálymnos, Psérimos is often glimpsed from passing catamarans but seldom visited for more than the single hour that 'Three Island Tours' from Kos allow. But spend a whole day here (using the scheduled ferry from Kálymnos) and you'll find a small islet (pop 38) with a huge communal olive grove behind the port-village Avlákia and two remote beaches 30 minutes' walk away: Vathý on the east, Grafiótissa to the northwest. The latter offers white sand, green sea and half a church clinging to a low cliff. Nobody alive here can remember a time when the other half was there. 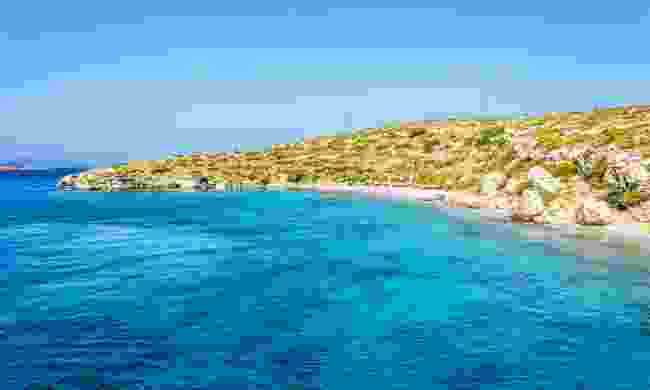 Low-lying, bare-ish Arkí is popular only with yachties – who appreciate its superb anchorages – and Italians. The northernmost Dodecanese but one, it musters 40 souls, limited places to stay, four tavernas and five beaches. Most famous of the latter, and the target of day-trips from nearby Lipsí, is Tiganákia (the 'Blue Lagoon'), with azure sea and sandy bottom; you can walk there in 40 minutes from Arki's lone village. If you don't fancy staying, good-priced day-trips from Pátmos are possible three times weekly using the local Nissos Kalymnos ferryboat. Alternatively, visit Arkí's greener neighbour Maráthi (two tavernas, one big sandy beach) on a formal excursion from Pátmos. 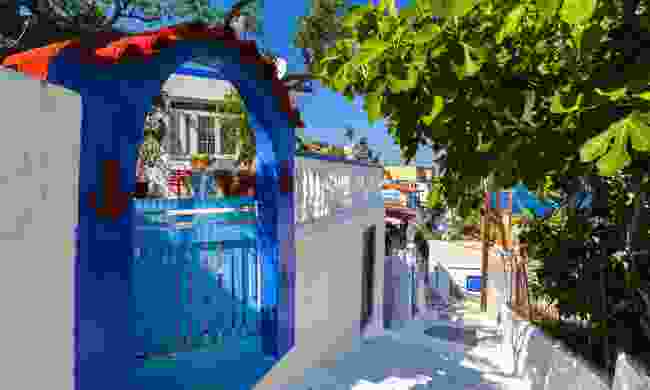 Situated between Sámos and Ikaría, Foúrni is slowly growing in popularity thanks to improved connections, but it's likely to remain a cult islet for both Greeks and foreigners. Unlike many remote Aegean outposts, the population (c.1300) is steady thanks to a busy fishing fleet and boatyard; the attractive main town is surprisingly large, with a mulberry-tree-lined high street leading inland, past shops selling premium local honey, to a shady plaza complete with ancient sarcophagus. Southerly beaches, accessible by rough path, taxi-boat or rental scooter, appeal; Áspa, with a fresh water spring, sandy pebbles and no dress code, is the most beautiful.

You think Foúrni's too busy? Arrange a day-trip (or longer) to stark Thýmena opposite – 136 inhabitants, one beach (Keramidoú), one taverna with rooms behind it. 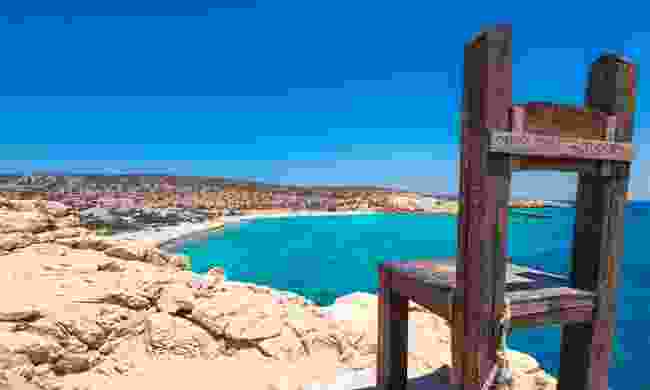 Gávdos, at 25-30 nautical miles off Crete's southwest coast, is Europe's southernmost point (or, as unkind wags put it, Africa's northernmost landmass). You must really want to go there – the crossing from either Paleóhora or Hóra Sfakíon can take over three hours in rough seas – and be willing to get stranded for extra days in case of bad weather. What awaits is a rugged islet well known to Greeks but now attracting foreigners: a few hamlets, scattered juniper groves, springtime migratory birds, and numerous blonde-sand beaches, of which Aïgiánnis, Kórfos and Sarakíniko are the best and most amenitied. There's a bus and limited road network, but expect to walk most everywhere. At the southerly cape of Trypití, you may sit on a giant chair and contemplate the sea lanes towards Libya. 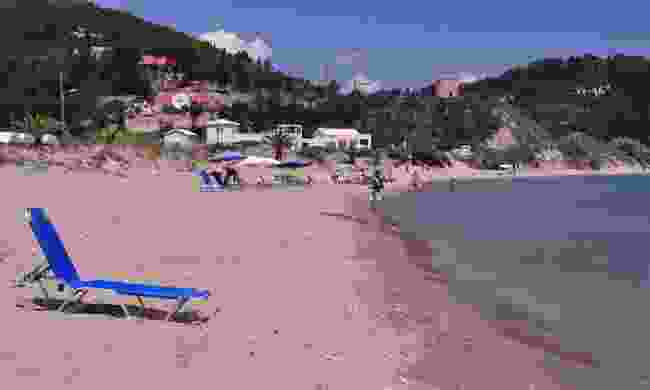 Greece's most northwesterly territories, beyond Corfu, are three specks in the Adriatic – the Diapóndia islets, visited mainly by Italians during summer. Extensive past emigration to New York makes it likely you'll be addressed in fluent Brooklyn-ese. Only Eríkousa has day-excursions from Ágios Stéfanos and Sidári resorts, for the sake of its superb sandy beaches Pórto, Fýki and remoter Bragíni (accessible only to those overnighting at local hotels). There are currently no day-trips offered to remoter Othoní or Mathráki – so stay you must (possibly for 2 nights), arriving and departing by scheduled mini-ferry from Ágios Stéfanos or Corfu Town. Forested, rugged Mathráki has a single, 3-km-long red-sand beach, while Othoní, largest of the trio, offers good walking and pebble beaches for a change.