Greece is famed for its extraordinary archaeological sites - but here are some you probably haven't visited. 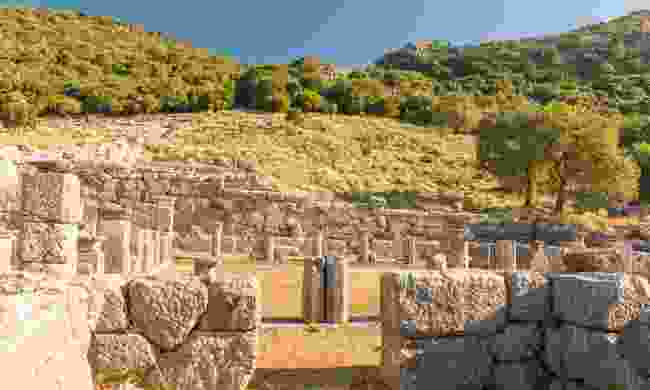 The ancient ruins of Kassope (Shutterstock)

Between Párga and Préveza, on the coast of Epirus, are two little-known but eminently worthwhile ancient sites. Between Monolíthi and Lýgia a road leads inland and 600m up in elevation to ancient Kassope, situated on a natural balcony with superb views over the Ionian Sea and Lefkáda island. Ruins of this minor Hellenistic city-state date from the fourth century BC, with second-century reconstruction after Roman sacking. The place was abandoned in 31 BC when its citizens were compelled to inhabit Nikopolis. Highlights include the central agora, a tiny, eroded odeion and (most impressive) a katagogeion or hostelry for representatives of the Kassopean federation. 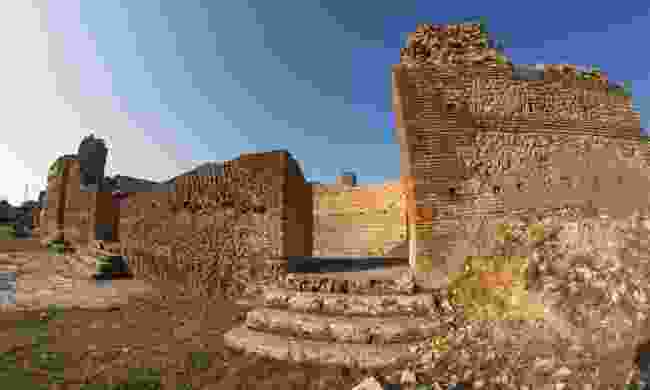 Just 7km north of Préveza, Nikopolis – the town established by Octavian (subsequently the emperor Augustus) to commemorate his nearby victory over Antony and Cleopatra – has moved, somewhat, into the spotlight since the completion of an associated museum. The site itself has been tidied up, with the theatre, and three superb floor mosaics in the Dometios Basilica, being the must-sees. The 2009-opened museum, 2km further towards Préveza, ably documents Roman and early Christian life here with statuary, coins, household implements and grave goods. 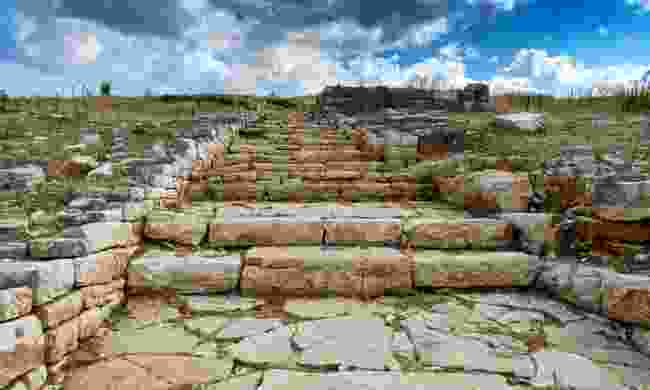 Continuing towards Mesolóngi, about 4km beforehand, ancient Pleuron (Plévro), just by the main road, is another Hellenistic city whose excavation has resumed recently. The most obvious remains are the massive perimeter wall of polygonal masonry, a small theatre whose stage is built against one of the fortification towers, and an ingenious reservoir; equally impressive are sweeping views over the local salt pans (which supply all Greece) and Mesolóngi's lagoon. 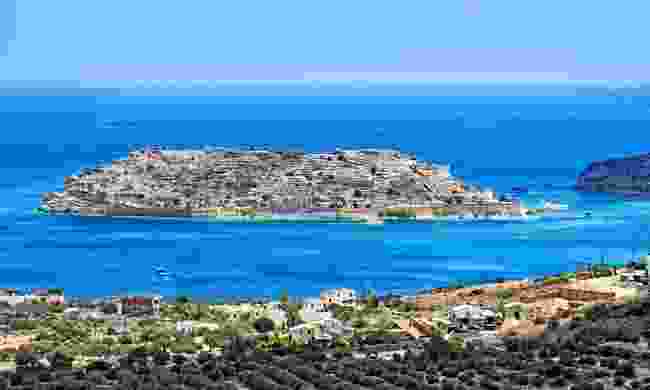 About 10km east of Mesolóngi, ancient Calydon is being excavated by Danish researchers who've uncovered a rectangular structure, most likely a bouleuterion, near the site entrance. Follow the marked track first to the massive foundations of an heroön (hero's monument) with a subterranean tomb, and then continue west through olive trees to the equally imposing plinths of a joint temple to Apollo and Artemis, atop a fortified and artificially augmented hill.The site's name is mostly known for the Calydonian bear sent by Artemis to ravage the region of Calydon because its king failed to honor her in his rites to the gods.

The ancient Aetolians had their main fortified religious sanctuary at Thermon (also known as Thermos), above Lake Trihonída, 1.5km southeast of modern Thérmo town. The site is still being dug so photography may be forbidden. The main temple, oddly orientated north-to-south rather than west-to-east as normally, was dedicated to Apollo Thermios South of this the sacred spring still flows, engagingly full of frogs. Beyond the spring extend two long stoas, terminating at a presumed bouleuterion (council chamber). The keeper will unlock a small, one-room museum, crammed with unlabelled finds from the excavations. 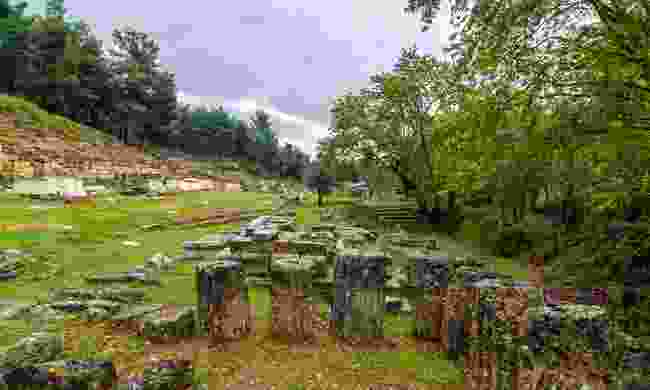 Some 47km north of Athens, and just 10km east of the little port of Óropos, near Markópoulo village, the Amphiareio of Oropos emerged in the late 5th century BC to honour the healing and oracular demigod Amphiaraos. The now-little-visited site was founded beside a sacred spring in a ravine, now densely forested with pines. Little remains of the hero's temple; the main attraction today is a lovely Hellenistic theatre, used in the annual ancient festival, with five 'seats of honour' in the front row and a nearly intact proskenion of Doric columns on the stage. There is a small museum of site finds. 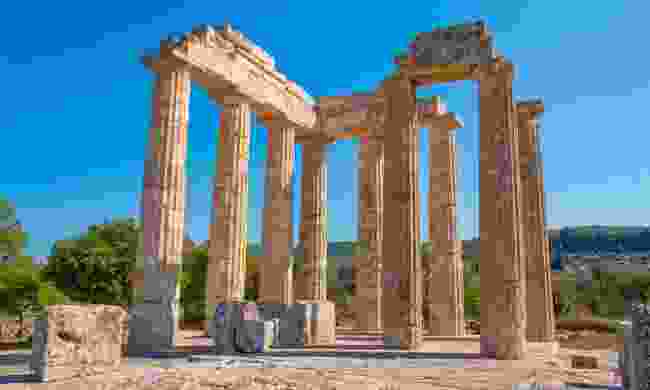 The temple of Zeus at ancient Nemea (Shutterstock)

The Peloponnese has various 'minor' but fascinating ancient sites. Almost within sight of the touristic hub-bub at Mycenae, ancient Nemea offers a stadium with the oldest known entrance tunnel, a good museum, well-preserved baths and (best of all) the 4th-century BC temple of Nemean Zeus, partly re-erected under the supervision of American archaeologist Stephen Miller such that nine Doric columns and two architraves rear up, whereas formerly there were only three columns. According to Greek mythology Nemea was home to the Nemean lion killed by Hercules in one of his twelve labours, and later also the site of the ancient Nemean Games. 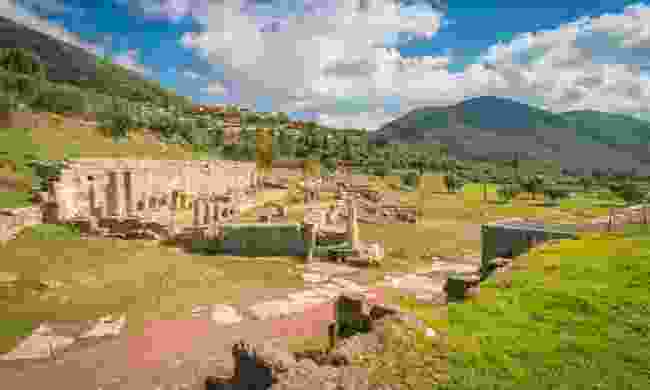 In the opposite corner of the peninsula, 27 km outside Kalamáta, ancient Messene adjoins modern Mavromáti village, where a worthwhile museum of site finds has opened. Excavated and well labelled are the enormous stadium – largest in Greece – an intact tomb at its far end, extensive gymnasium colonnades, an ekklesiastirion (council chamber), and the massive if part-collapsed Arcadia Gate in the walls of the ancient city – staunch enemies of the Spartans – which flourished into Roman times, and was supplied with water from a still-gushing spring in the centre of Mavromáti. 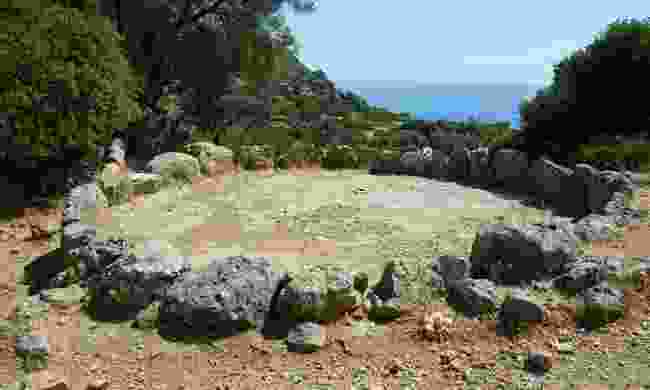 Minoan Crete gets most foreigner attention; littleLissos, on the southwest-coastal path, was a later, Dorian foundation. The trail there is well-marked with yellow-and-black paint splodges, as it forms part of the international E4 route. Closest start point is the little resort of Soúgia on the east; the approach goes through a spectacular gorge of reddish walls. Of ancient Lissos, the only substantial trace is a Hellenistic Asklepion (healing centre) whose floor is enlivened by Roman-era mosaics of birds and geometric patterns. Although only an hour's hike distant from Soúgia, it's hot work much of the year – take lots of water – and you may want to organize a taxi-boat transfer to Lissos beach (swimmable) and then walk back one way.