'Circular saw’ – Circuli in Finnish – is not the most obvious name for a reindeer.

Unless you’re from Lapland and know that Rudolph and his pals are potential killing machines. “Be careful with Circuli,” warned Paula, our guide at Eastern Lapland’s Salla Reindeer Park. “He’s the dominant male, and in rutting season he gets very jealous. Don’t get close to one of his girls – he may try to spear you with his antlers.”

During our pre-trip preparations we’d been more worried about bears and swarms of voracious biting flies. But bears run scared in Finland. They are still hunted; I’d even found a can of bear meat in the local supermarket. And insects swarm only for a few months in early summer. The cool autumn air here was completely free of them.

Reindeer, it seemed, were another matter. Free of seasonal fluffy down, Circuli’s antlers were jagged and sharp as javelins.

“All the reindeer are domesticated,” Paula continued. “But none are cuddly – except in winter when they’ve forgotten about sex and are decorated for the children. So be careful when you’re out there in the woods.” 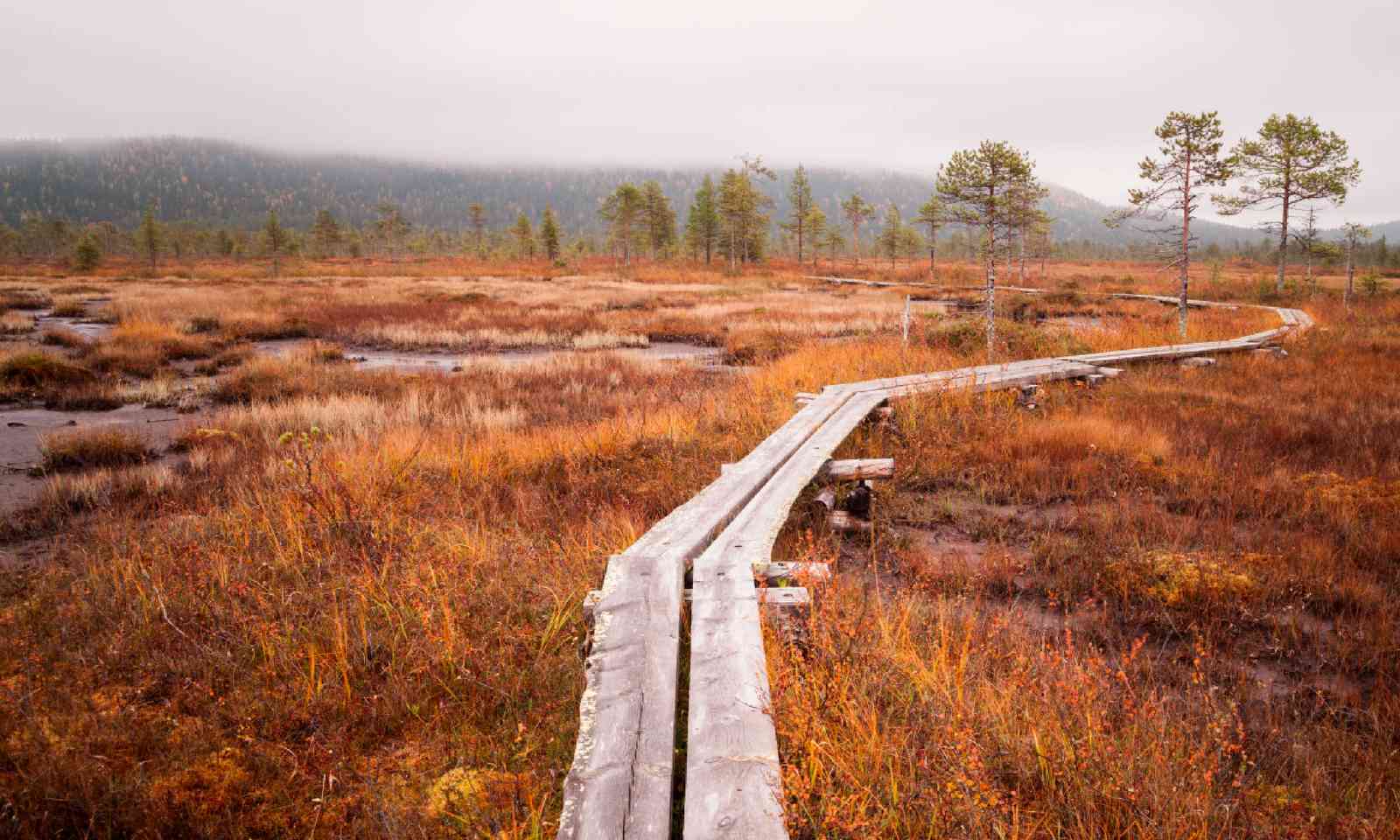 My brother-in-law Rob and I were in Finland for just that: to walk in the woods for three days on what is surely one of the least-known great hikes – the 80km Karhunkierros, or Bear’s Ring Trail.

A year previously, while on a summer solstice pub crawl in Helsinki, I’d been holding forth about how South America still preserves the world’s greatest wilderness areas. Europe is finished, I’d muttered – all houses and roads. Not true, countered my Finnish friends. Antarctica aside, the greatest wilderness in the world lies in Europe, they said, a few hundred kilometres north of their very city.

Oh yeah? A Finnish forest? Bigger than the Amazon? Then I checked. They were right. It’s called the taiga and, but for the Bering Strait, it stretches east in an unbroken belt from Norway to Newfoundland.

We left Salla’s reindeer for the Karhunkierros the next morning, after bolting eggs, porridge, hot coffee and buns – and struggling to keep them down on a bumpy drive to the trailhead at Ristikallio.

Our guide was a buff young Finn called Olli who looked like he spent his free time chasing bears up fells or breaking the ice on Lappish lakes for bracing swims. Olli glanced at Rob’s baggy waterproof trousers and my middle-aged spread, and smirked: “Tell me if I walk too quick.” Then he headed briskly up the steep path into the taiga.

It was early September, the onset of the taiga autumn, a season of mist, mellow fungal fruitfulness and colours as vibrant as the maples of Maine or Manitoba. (In Finnish, these vibrant autumn colours have their own name: ruska.) All around us were wispy Scots pines and birches seasoned gold and grey. The mossy ground gave us almost no footfall and the stillness was as palpable as in an empty candlelit cathedral: air so quiet that I could hear the beat of a crow’s wings as it flew 50m overhead. 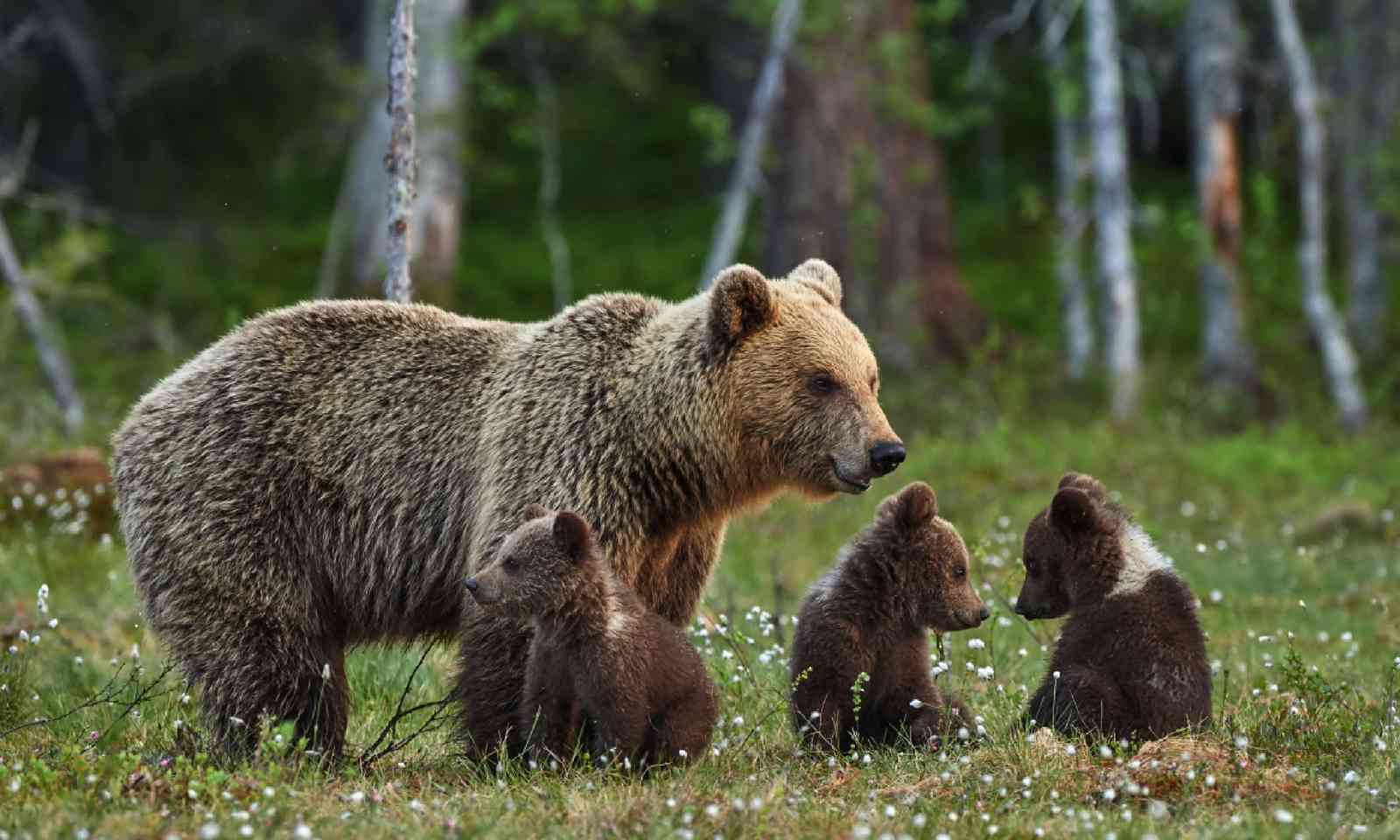 After an hour the forest cleared as we reached a small plateau. The silence was broken by the rush of water far below. Olli pulled out a thermos of piping-hot tea and we sat on fallen trunks as the drifting mist cooled our faces and cleared to reveal a yawning chasm whose broken rocks overlooked the Aventojoki River dashing through a gorge into a huge, dark lake.

A seemingly impenetrable growth of dense green larches and gilt-leaved birch shrouded the landscape. A steep descent brought us around the lake, crowded with bulrushes, and then ever deeper into the dense, primordial forest towards the Oulanka River. The Karhunkierros Trail traces the course of this river, which gives its name to the national park that protects the area – perhaps the most pristine stretch of old forest in Western Europe. As such, Oulanka National Park is a member of the exclusive PAN Parks Foundation, set-up to protect the continent’s remnant nature.

Olli told us more as we walked. The great canyons and lakes that score Oulanka were formed just 11,000 years ago at the end of the last Ice Age. The permafrost and packed snow retreated to leave behind a compressed land, puddled with a patchwork of giant melt-water meres, reedy marsh and mires. It was a step back in time, I thought, into Anglo-Saxon Grendel country. The flat expanses were lent relief, Olli said, by ancient and craggy granite hills broken or worn smooth by the ice; as the world had warmed they became covered with mosses, ferns and eventually dense boreal forest.

The trees all around us were clothed in wispy lichens of myriad shades of greys and greens. In places it hung so thickly it looked like the beard of the mythical Green Man, like Louisiana Spanish moss. “Reindeer lichens,” explained Olli. “Usnea. They only grow when the air is real clean. You can eat them,” he continued, offering me a bit, “and the Sami [the indigenous people of northern Scandinavia] have used them as an antibiotic for over a thousand years.”

The lichen sustains many local herbivores including lemmings and reindeer, and is critically important in the food chain. But it’s suffering, Olli told us, as global warming raises temperatures in Lapland.

And what of the big predators? I asked.

“If you are lucky you can see bear here,” he said. “There are 40 or 50 in the park. I’ve seen bear on several occasions, taking fish from the river. And wolf. You can hear them sometimes at night. There are wolverine too – they kill and eat reindeer in winter. The deer sink into the deep snow but wolverine have huge, broad feet and can walk on top of it. So they run up to deer and eat them alive from the stomach. Like hyena, you know, in Africa.” 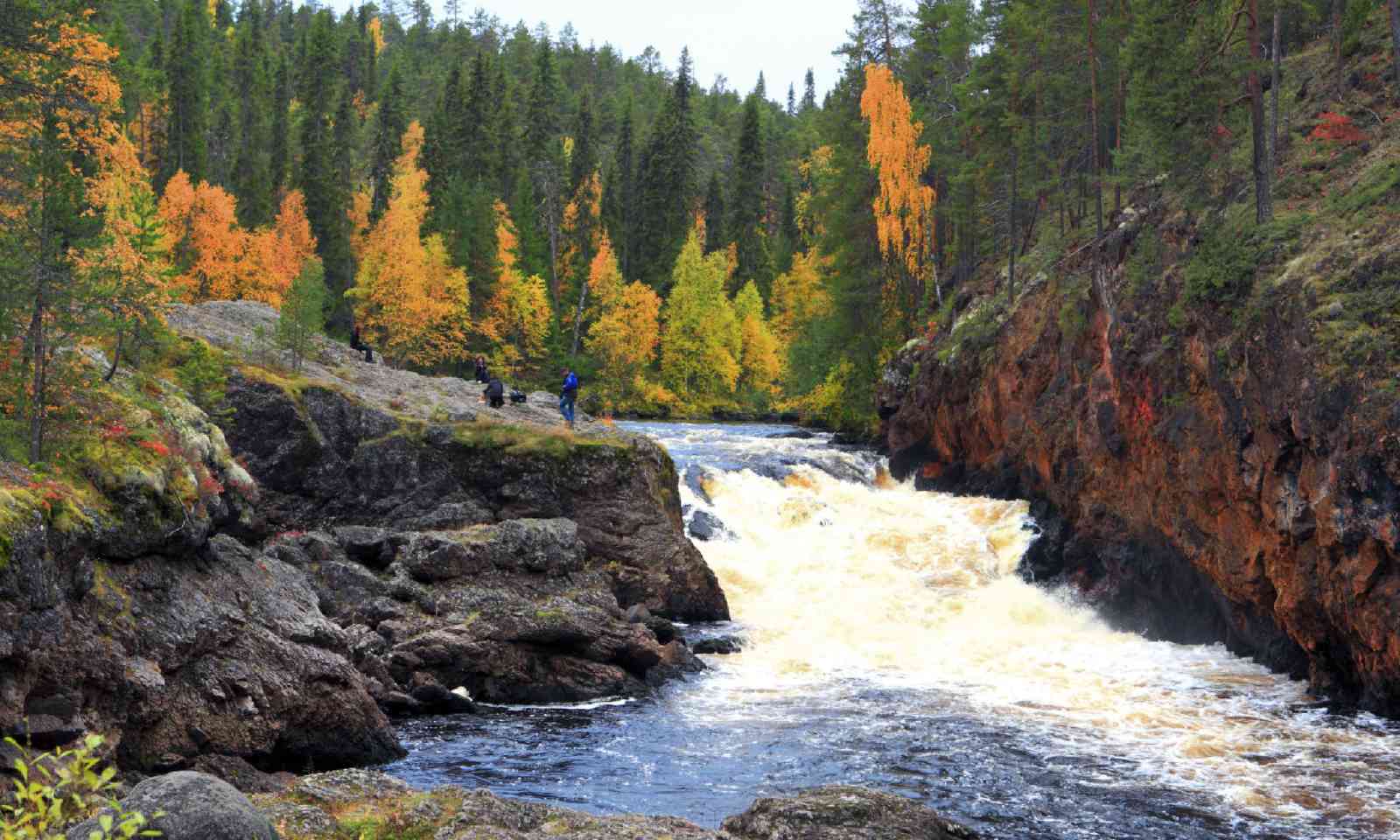 As we crossed another brook I saw moose footprints in the mud. A startled capercaillie burst from a nearby clump of bushes. A steep descent on a boardwalk finally brought us to the Oulanka River and lunch, in a ridiculously pretty location – a wooden hut next to rushing water set in a golden bowl of autumn trees lined velvet with moss. Everything was prepared for a hiker’s arrival. An outbuilding was stacked to the roof with dry logs. There was an axe. A hearth. Benches.

We warmed ourselves by splitting logs and burning them, and settled down to a delicious campfire lunch of gamey burgers and hot tea.

We decided not to tell our children about eating Rudolph when we got home.

A few more hours along the Oulanka River brought us to camp and a clear, deep sleep. The next morning, after a photo stop at the roaring Kiutaköngäs Falls, we set off early along another high trail that wound around the brown meanderings of the river before plunging into perhaps the most beautiful forest I have ever seen.

It was a Brothers Grimm landscape, an enchanted wood. The floor of the taiga was carpeted with billions of jewel-like berries: cranberries, blueberries, lingam-berries and cloudberries.

Ferns and mushrooms bloomed in the moss – creamy puffballs, red fly agaric, inky toadstools and, on the bark of fallen trees, countless species of shelf fungi. The trees, draped in lichen, were stretched above us in a thousand shades of golden brown and deep green. Woodcocks and grouse clucked and called in the distance. 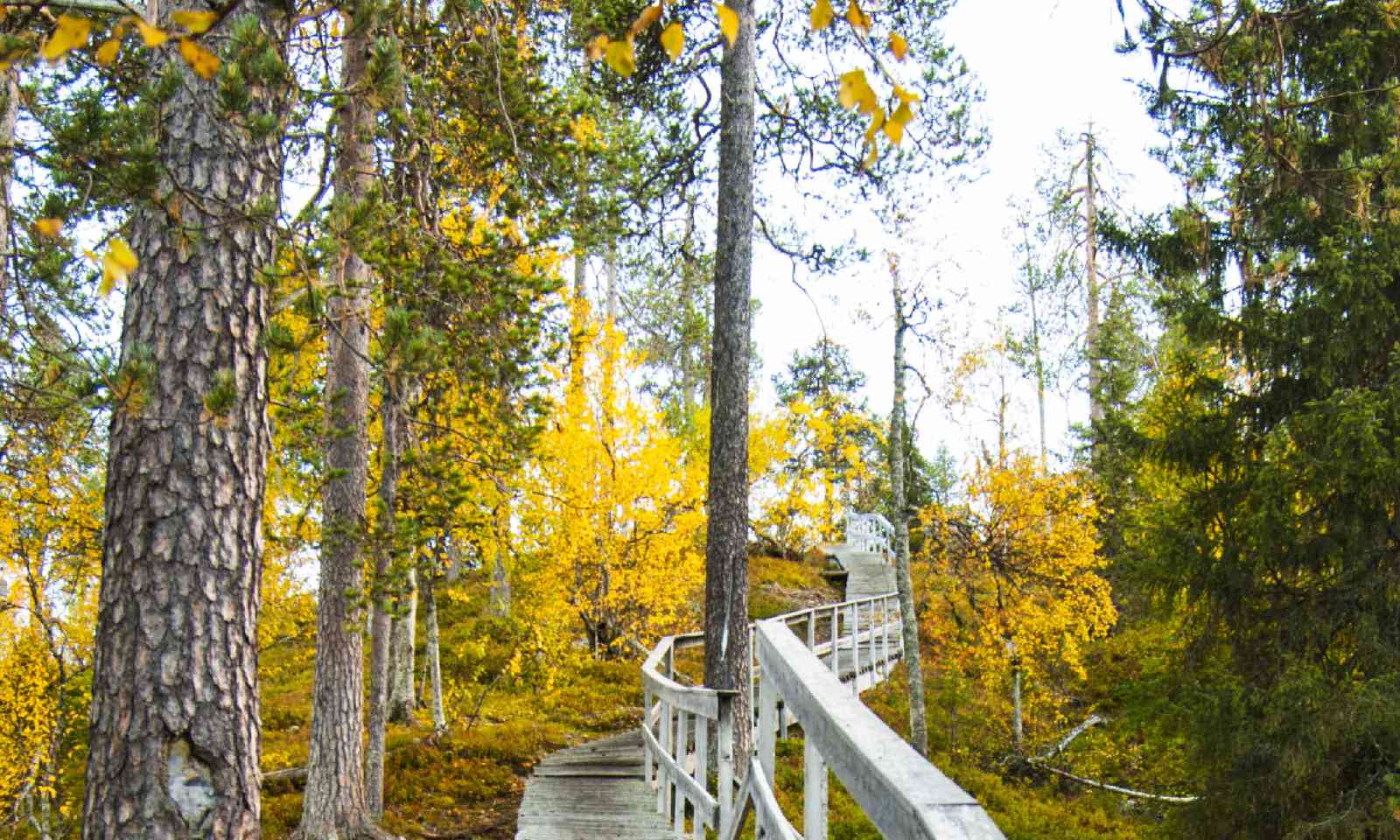 We lunched on a sandy river beach next to a glade busy with Siberian jays and brightly coloured great woodpeckers. Then we walked on, a punishing four hours down a gradual slippery slope, murder on the knees, before winding around a lake to the wilderness hut at Jussinkämppä – and to a handful of other hikers. They were all ages, and all Finns. Where were the tourists, I wondered. Do the Finns want this Eden all to themselves?

No. It couldn’t be. They were clearly surprised and delighted to see us. There were couples in their 60s out for a weekend walk, young hikers on a break from office life in Helsinki, intrepid outdoors types on a ten-day hike. We drank coffee and vodka together under a shimmering, starry night sky and then crawled into our sleeping bags on the hut’s hard wooden berths.

All the way to Alaska

The final day cut through more enchanted berry-carpeted forest, then into a broken land of charred stumps and recovering tree growth. “There was a fire here 150 years ago,” commented Olli. Lapland takes a long time to recover. It's vast, but fragile.

We reached a slow-moving section of the Oulanka River, where the sluggish water formed a series of low pools crossed by hanging bridges. The trees here were glorious – a profusion of grenadier-guard red maples, Lincoln-green larch and birch as bright gold as a soldier’s button. The trees were reflected perfectly in the polished surface of the water. The silence was astonishing. 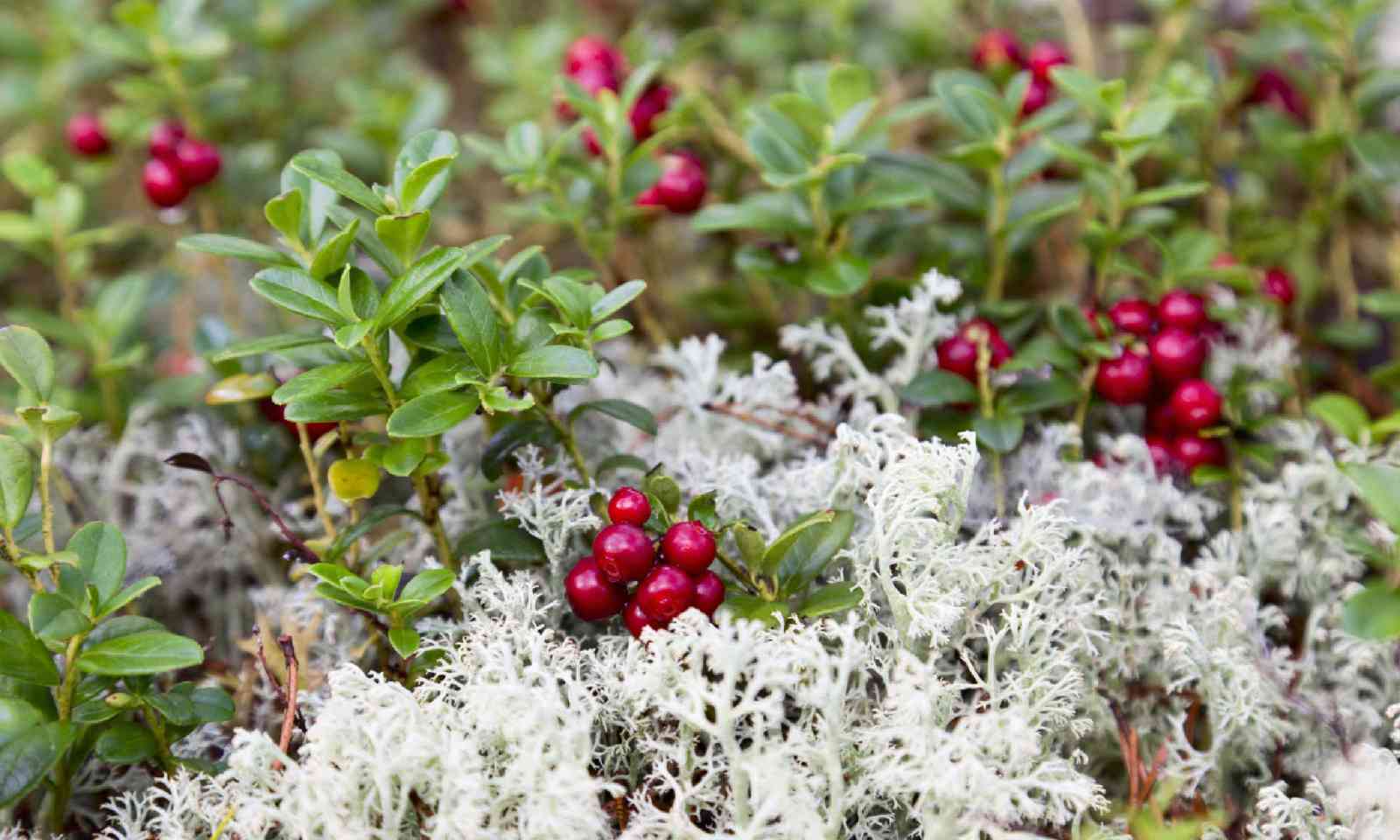 It lulled us gently into late afternoon as we clambered into noisier, more touristy country. Roads were clearly getting closer. There was a profusion of families at the Aallokkokoski Rapids, and at the pretty watermill at Myllykoski, where the foaming Oulanka rushes through a narrow canyon. With muscles aching we finally arrived at the wilderness hotel at Oulanka basecamp – for beer, congratulations and more beer.

But our taste of the taiga was not quite over. The next day, after eating Arctic char with puikula potatoes and taiga-berry sauce in Salla’s gourmet Kiela restaurant, Paula drove us to the high fell country. She wanted us to leave this place with an unforgettable sense of the forest’s majesty, as well as its quiet beauty.

We climbed through the marshy ground to a stony hill with a sweeping view over the taiga. In front of us, an endless, undulating sea of brush-like conifers and golden birches stretched to all horizons. The air was so clean and clear that we could see across the border for some 100km, into the depths of Karelian Russia. I saw the faint, far-off glimmer of a distant lake, silver in the sun, and a river running to it.

“The Oulanka River,” said Paula, “and that lake is Paanajärvi, the Baikal of the north – deeper than the Baltic Sea and as wild as Siberia. The forest carries on past there for over 10,000km, all the way across Siberia. Walk through it and you will eventually see Alaska.”

What a thought. And what a journey that would be.

For rugged cliffs and frothing rivers, great hiking on the Karhunkierros Trail, and endless taiga forest stretching to Russia.

Lapland’s capital is the place to get to grips with its culture. The Arktikum Centre is home to the Provincial Museum of Lapland and the Arctic Centre. Nearby is the cheesy but fun Santa Claus Village, beloved of toddlers.

Finland’s finest wilderness canoeing route; the best section is from Kuttara to Ivalo.

The author’s hike was arranged by Basecamp Oulanka, a wilderness hotel overlooking the Oulanka River at the southern end of the Karhunkierros trail.

Take a look at our Finland travel guide for more tips, articles and trip advice... More

Crossing the Finnish line: 'roughing it' in the Finnish wilderness | Destinations... More

5 of the best multi-country weekends | Inspire me... More