The 7 best places to see jaguars in the wild

The elusive jaguar is the Americas' truest big cat, and though sightings in the wild are rare, they aren't impossible. In fact, if you know where to look, we'd say you've got a fair chance... 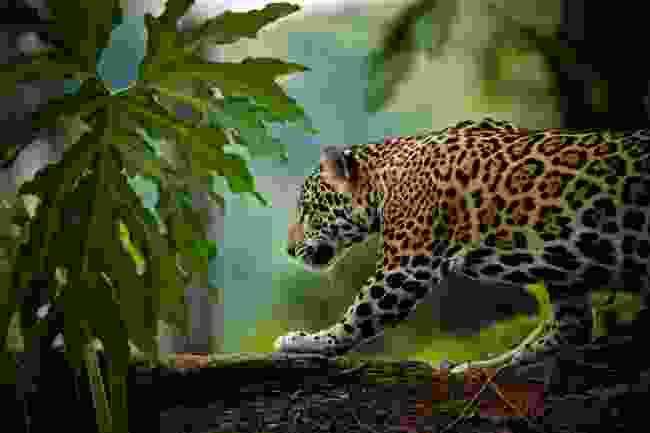 The only true big cat in the Americas – indeed, the world’s third largest feline, with males reaching 1.8m long and weighing up to 158kg – is also among the most beautiful, its golden pelage spangled with dark rosettes.

Sadly, jaguars have been eradicated from some 40% of their historical range. Now, they are classed as Near Threatened by the International Union for Conservation and Nature (IUCN), hit by habitat loss, water extraction and hunting, among other factors.

So, where in the world can you see the elusive jaguar? 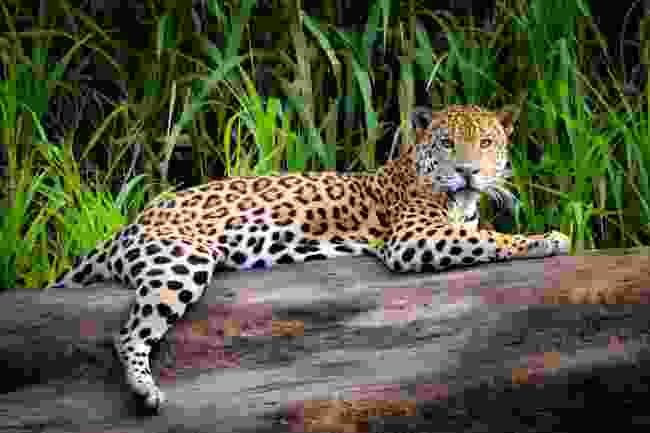 A jaguar resting by the Tambopata river, in the Peruvian Amazon (Shutterstock)

Today, the jaguar survives in 18 countries between northern Mexico and far north Argentina, and in diverse habitats: forests, shrubland, wetlands, savanna and grassland, from sea level to 3,000m altitude.

Like most cats, the jaguar is solitary and famously shy – sightings are rare, and even today population estimates vague. The IUCN suggests that around 64,000 individuals survive in the wild, though some estimates are as low as 15,000 and others as high as 173,000.

So, it’s best to venture to the destinations below to immerse yourself in nature, and enjoy sightings of beautiful mammals, birds, reptiles and insects – and thank your lucky stars if you do catch a glimpse of this magnificent predator.

Here are the world's best reserves, forests and national parks for jaguar sightings... 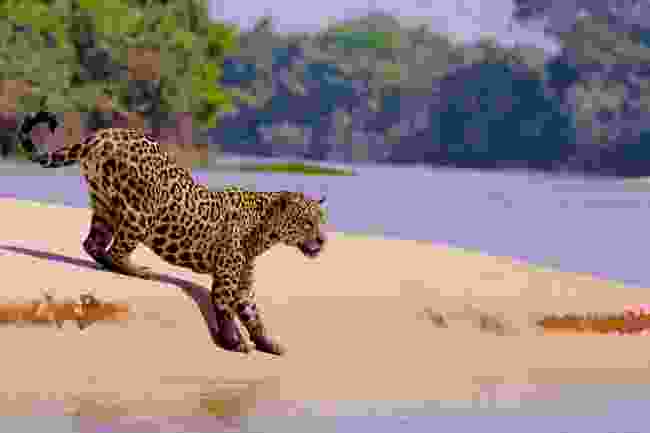 A jaguar ready to pounce, along the Cuiabá, in Brazil's northern Pantanal (Shutterstock)

The world’s largest wetland, a vast floodplain spanning some 170,000km2, is the only area you can realistically expect to spot jaguar (though even here sightings are never guaranteed).

Encounters in the Pantanal are much more common and last longer than in other locations – the jaguars tend to be twice as large as in the Amazon, too.

To maximise your chances of a sighting, take a boat ride on the Cuiabá River towards the end of the dry season (June to October), when the floods have receded and the predators head to the riverbanks to hunt capybara and caiman.

The Paraguay River around Taiamã Reserve is another hot spot. It’s possible to stay on a floating hotel here to maximise opportunities for sightings. 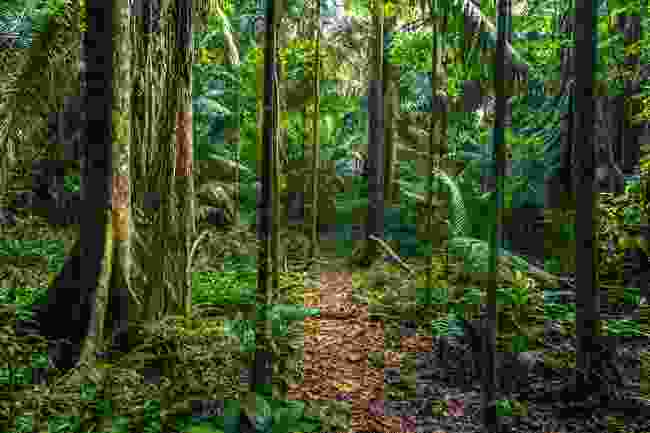 The Amazonia subpopulation of jaguar comes to an estimated 57,000, according to the IUCN – nearly 90% of the overall total. That said, spotting any kind of mammal in the rainforest is a tall order, let alone one as elusive as the jaguar.

For the best (albeit slim) chance of an encounter, head to one of the Peruvian reserves deep in the Amazon near Puerto Maldonado. Manú National Park, a 17,000km2 biosphere reserve, is a hot spot – visit a clay lick at dawn to watch macaws and tapir, and cross your fingers that a jaguar emerges from the jungle. 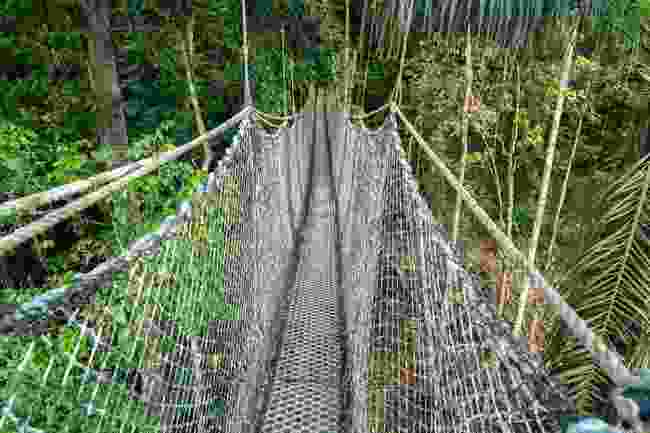 The Iwokrama crossing is probably *not* where you'll see jaguars, but go deeper into the forest... (Shutterstock)

The site of an innovative project trialling sustainable forest management, Iwokrama is a 3,710km2 swathe of tropical forest in the verdant Guiana Shield that’s home to giant river otter, Guianan cock of the rock, black caiman, huge harpy eagle and – yes – jaguar. Indeed, the BBC filmed here for its 2008 series Lost Land Of The Jaguar.

With a range of activities on offer, including nocturnal caiman-spotting boat rides, various nature trails and a canopy walkway, there are ample opportunities for spotting more common species, and jaguar are seen reasonably frequently.

As with many of these destinations, this is dense forest so spotting big cats is a bonus rather than a given. Avoid visiting during the heavy rains (May to August), too. 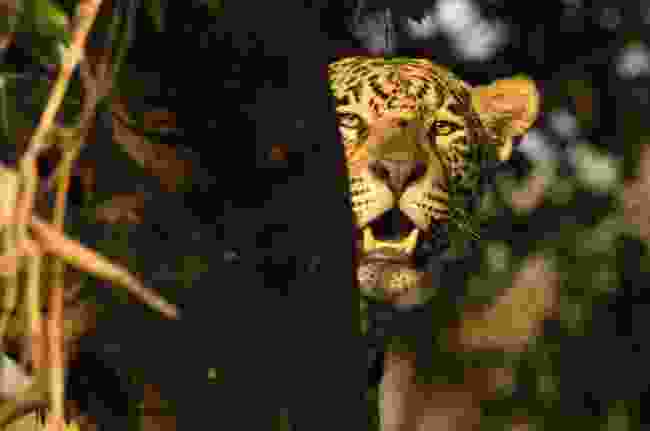 Jaguar mid-hunt by a river in the southern Pantanal, Brazil (Shutterstock)

Though sightings are more common in the north, jaguars thrive through much of the Pantanal, 80% of which is in Brazil, the rest shared between Bolivia and Paraguay.

Guests staying in the high-end accommodation at this former cattle ranch report high sighting rates. Spend a day with the team working to habituate individual cats to human presence, and you have a very good chance of an encounter. It’s claimed jaguars are seen almost daily during the dry season (June to October). 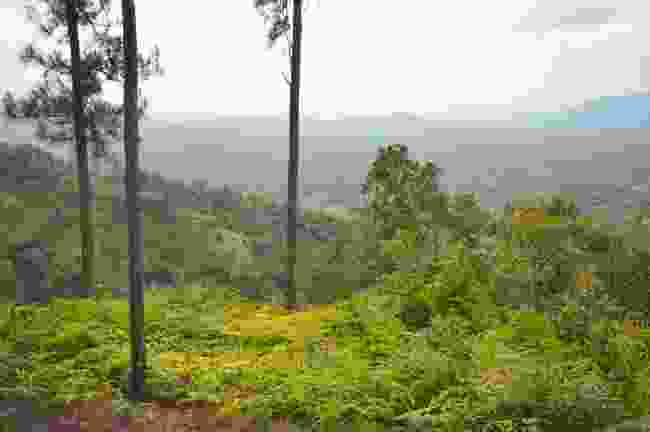 Cockscomb is the world’s first reserve created specifically to protect jaguar. Designated in 1986, largely thanks to the work of renowned conservationist Alan Rabinowitz, the sanctuary comprises of 400km2 of mostly tropical moist forest on the eastern slopes of the Maya Mountains in central Belize.

The best way to explore is on foot, along the varied trails that lace the reserve. Watch for tapir, ocelot, coati, boas and profuse birdlife. Ideally, camp there to experience the most peaceful (yet bustling with wildlife) dusk and dawn periods. Kayaking is also possible.

You might spot signs of jaguar activity, perhaps paw prints. Do manage expectations of a sighting, which even here is very rare. Note that the long rainy season, from June to January, is best avoided. 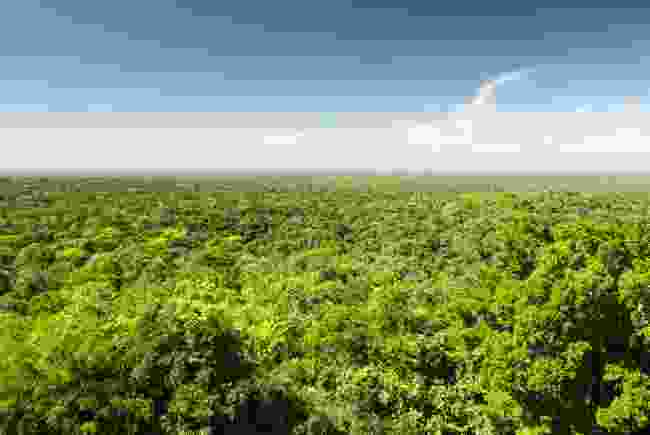 The view from above the Calakmul Biosphere Reserve, Mexico (Shutterstock)

Calakmul is best known for the vast Maya city that once flourished here – with a population of around 200,000 at its peak during the first millennium AD, and two of the largest pyramids in Mesoamerica.

Now, this site in the Yucatán is home to five of Mexico’s six wild cat species: puma, margay, jaguarundi, ocelot and perhaps 200 to 500 jaguars. It also hosts agouti rodents, coati, tapir and howler monkey, plus around 350 bird species.

Given that the reserve spans over 7,200km2 of the Selva Maya Rainforest, tracking one of the big cats is extremely difficult. Still, join an early morning walk and you’re likely to see wild turkey, peccary, toucan and howler monkey (which you’ll certainly hear), and possibly jaguar pugmarks. 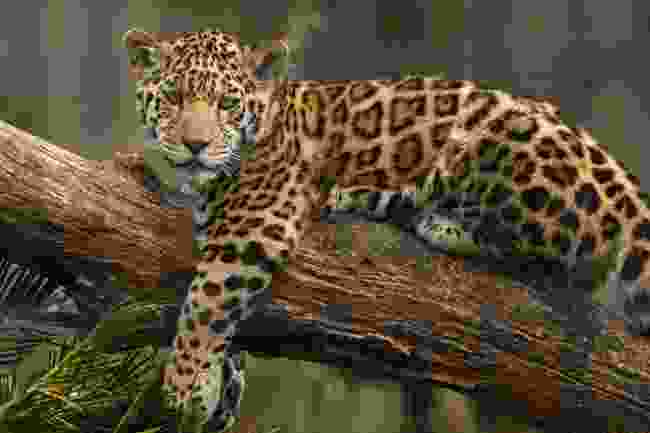 A jaguar perched on a tree trunk (Shutterstock)

Costa Rica is one of the world’s greenest countries, both literally and figuratively. Some 25% of its territory is protected in national parks or private reserves, over half of its land is covered with trees, and it’s home to 5% of the Earth’s biodiversity.

Unsurprisingly, jaguar roam Costa Rica’s forests – but that doesn’t mean they’re commonly spotted. Incredibly, hunting was legal here until the 1980s, and as a result the big cats are extremely shy.

Sightings do occur in the Talamanca Mountains and coastal national parks, but they’re extremely rare. One place that certainly hosts a population is Corcovado National Park, in the far south.

Tackle one of the walking trails, and you may see fresh jaguar prints in the mud. You’ll also probably spy agouti, coati, possibly margay and perhaps Baird’s tapir. Be prepared for hot, sweaty hiking and serious jungle camping.

One place in Costa Rica you’re guaranteed a sighting is at Las Pumas Rescue Centre in Guanacaste, in the north-west. The rescue centre homes cats, including two jaguars, who can’t be returned to the wild.

The top places to see chimps