The word 'awesome' has become overused and depreciated. Liz Cleere discovers an island in Thailand the reflects the true meaning of the word...

We raced towards our next anchorage, intent on arriving before nightfall. Ko Ha (literal translation: Five Islands) is a group of limestone stacks which jut out of the sea from a protected coral bed. Anchoring is illegal, so visiting boats must take one of the Marine National Park laid buoys.

The pilot chart (a kind of marine guide book) shows the area as suitable only for day stops, but as we've stayed in plenty of unmarked areas before we decided to take a calculated risk to stay overnight.

As we made our way south, American and Alicia followed on SY Synchronity. We arrived at dusk and made a careful recce through the channel islands before choosing the most protected place on offer. 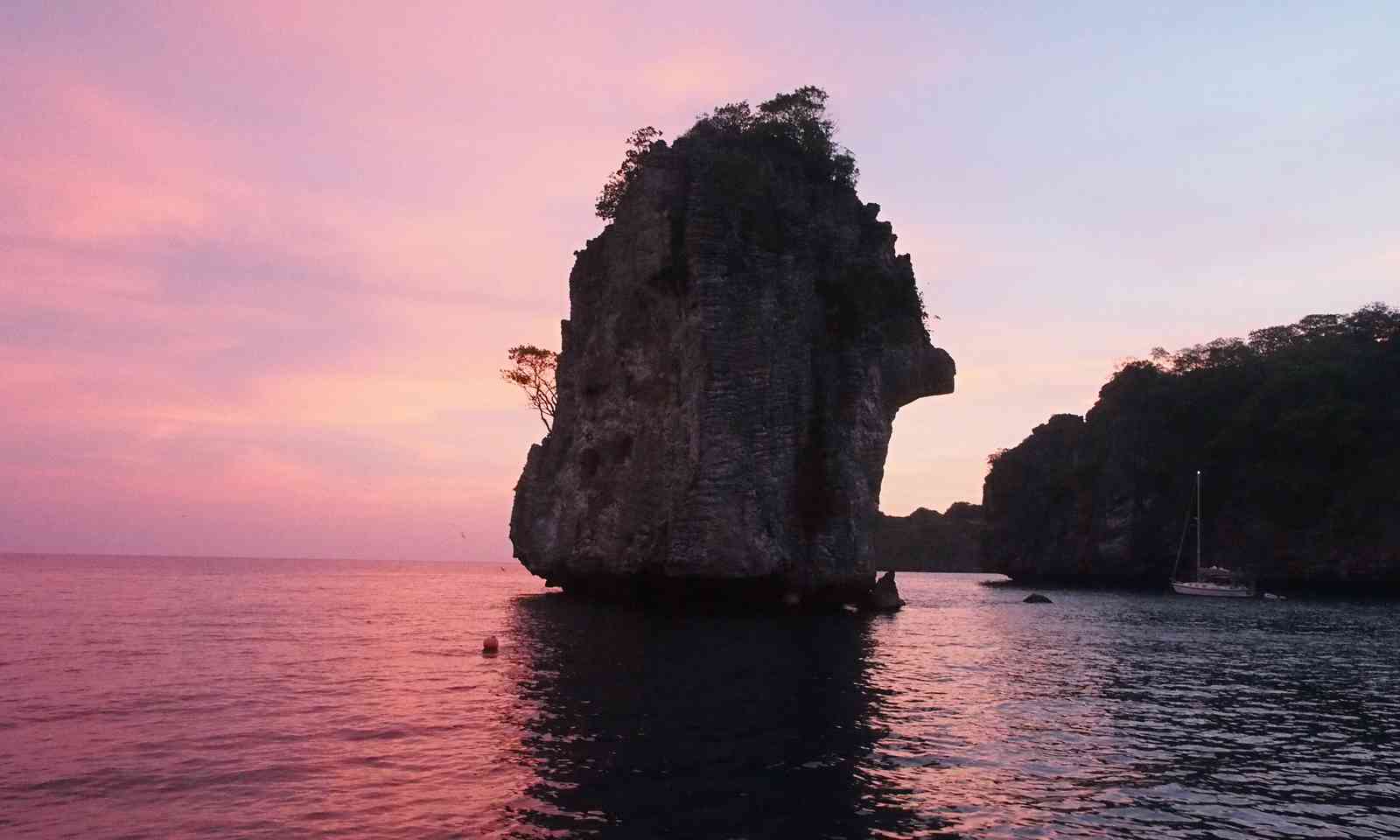 The official buoys have a mixed reputation in the yachtie fraternity, and we knew of boats that had drifted away on failing buoys at night. Other salty sea dogs swear by them, often remaining tied to a buoy for months. If the winds whipped up we would take it in turns on 'anchor watch'.

It was too late to get into the water to inspect the strength of the mooring, so we attached SY Esper to the heavy rope with care and made sure we knew which heading to take should any kind of emergency occur overnight. We were the only boats there, so we would have enough room to manoeuvre without the worry of colliding with anyone else. Once we were happy with our position, Jamie cracked open the beers and we took in the spectacular surroundings.

Although 'awesome' these days is used to describe anything from Justine Bieber's new single to a favourite pair of socks, Ko Ha is a unique place truly deserving of that exclamation. SY Esper was moored 50 meters away from 'floating island', named because of the hole in its middle, carved out by the sea, which gives it the effect of hanging in mid air. Each of the islands has virgin rainforest growing on its inaccessible summit. Caused by wind erosion, horizontal shelves criss-cross the cliff faces like massive dry stone walls.

The water is clear to the bottom of the sea and big coral heads reach up to the surface through every shade of blue and green and flickering neons. Although no humans live here, above the water the islands are home to all kinds of animals from insects and lizards to a multitude of bird life, including a colony of sooty terns. We watched them swoop back and forth from their nests in the rock crevices, chattering as they flew through the rigging until they settled for the evening. 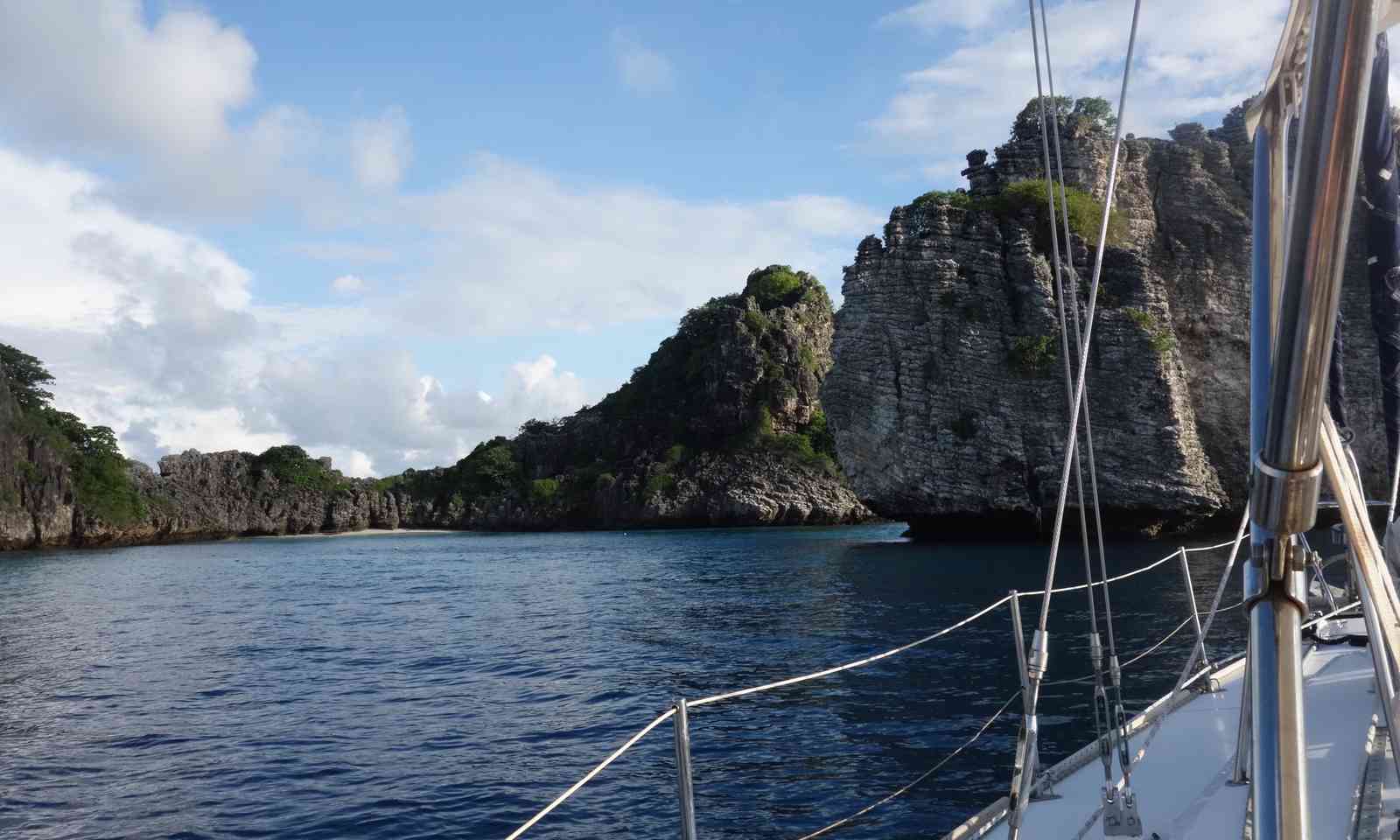 Opposite us lay a larger island shaped like a dumbbell. When we arrived a white strip of beach had been visible in the dip between the two ends, with shallow turquoise water stretching in front of it. This was a pristine, secluded place waiting to be explored. The tide had already turned, and it didn't take long for the beach to disappear underwater as the sea rose and the sun set behind the island.

Holiday-makers and dive enthusiasts visit the island outcrop during the day, on trips arranged by hotels or dive centres. As Ko Ha is a little remote, they often come for only an hour or so before heading back to the mainland or onto the next spot on the itinerary. This is a shame, because we found Ko Ha to be one of the most magical places in this part of the world. But then maybe that is because it is so often deserted.

During the night a storm kicked up. We both went on full alert. Would this change the direction of the wind and put us in danger of hitting the coral beneath, or the rocks above us? We hastened on deck to check our surroundings, then consulted the chart and anchor alarm to see how far, if at all, we had moved.

It all looked good. Each flash of lightning lit up the cliff faces, which now appeared a lot closer. We talked through, again, what to do if it all went wrong. With adrenaline pumping through our veins and thunderbolts smashing the sea in front and behind us, we couldn't help smiling at the intensity of our situation. It was thrilling to sit behind the islands as gales swept past us in the black, open sea. 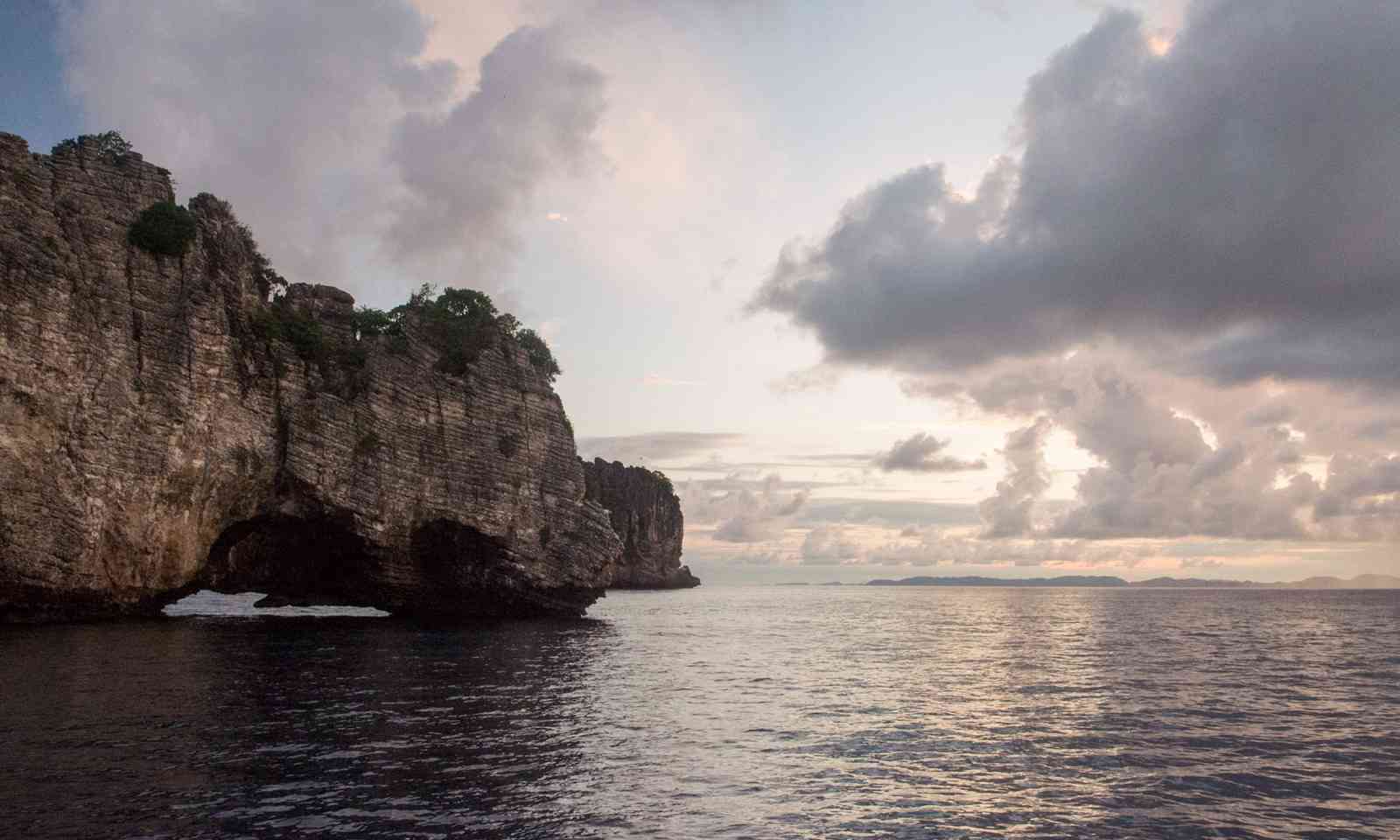 The next day we drank fresh coffee in the damp cockpit and watched the sun rise behind pink clouds. When the rain stopped American radioed through to Jamie to invite him on a 'revive the spear diving adventure'. Alicia and I wanted nothing more than to check out the silica beach, a new version of which was forming again on 'dumbbell' island.

It was time to get to know this unusual place a little better.