Nuclear bunkers, Neolithic sites and knock-out views. Put down your picture-postcard perceptions of the Cotswolds and pick up your boots for a tour of its countryside

It is a little-known fact that there are more Bay Tree Cottages in the Cotswolds than there are in any other part of the world. I should confess that this fact is little-known because I’m not sure anyone has actively set out to validate it. But, after six days wandering from village to village as part of a self-guided Cotswold Ring walking tour, the sheer volume of them was hard to ignore. Actual bay trees, however, less popular.

Spotting cottage names was obviously not the highlight of what ended up being an adventurous 100km, seven day walk through one of the most beautiful parts of England. I’ve lost count of the times I’ve previously strolled down the wide street that dominates Broadway or stopped for a photo on one of the iconic local stone bridges that define Bourton-on-the-Water. But I was drawn back to the area once more as I liked the idea of the leaving the 400-year-old market halls and chocolate box charm behind for a while and digging a bit deeper.

In so doing, I think I might have unearthed a surprising side that’s admittedly less picturesque in parts, but perhaps more interesting. Because from Neolithic long barrows, fields of sugar beet and quirky local signs – I certainly didn’t want to get fined 40 shillings for not shutting the gate in Blockley – to vast estates, ha-ha ditches, disused quarries, a nuclear bunker and names such as Pye Corner, Pillow Mounds and Guiting Power, there is much more to the Cotswold countryside than docile sheep and cows.

Getting off the map 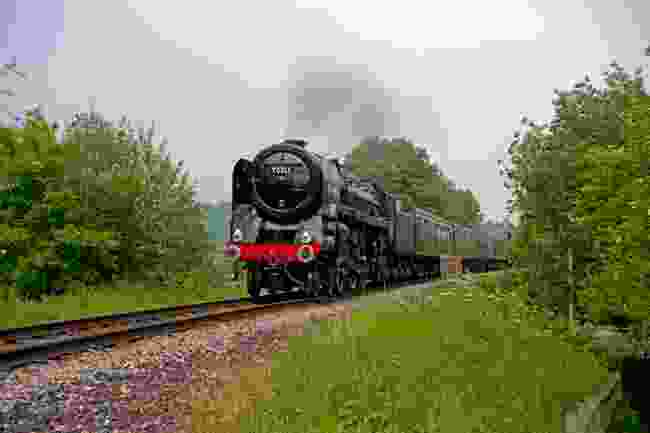 It was while walking along the edge of Cheltenham Racecourse on day one that I realised if we were going to get the most out of this walk, we needed to pay attention to the map and route notes. The circular Cotswold Ring is actually a mix of sections from other trails. One minute we were following the acorn symbols of the popular Cotswold Way. The next, we were joining the Winchcombe Way before meeting the Monarch’s Way and turning onto the Heart of England Way. Then it’s on to the Windrush Way with a few kilometres on the Wardens’ Way thrown in for good measure. Sounds confusing, but armed with the route notes, I felt like we were being guided over every double stile and through every field gate (or ‘S’ and ‘FG’ for those well-walked readers familiar with such notes).

With 13km of grassy tracks, fields, woods, big hills and a healthy dose of mud, day one was a not-so-gentle introduction to both the route and the area. The highest point in the area and the reward for climbing out of Cheltenham and into the Cotswolds, Cleeve Common was a brilliant, open vantage point from which to appreciate just how ‘rolling’ the countryside really is.

It was also a welcome sight because of the wall of cows we’d had to navigate just to get there. It’s fair to say they hadn’t read the Countryside Code when they decided to block not just our path, but every path, leaving us with little choice but to sink into the mud and clamber through to bushes and over fences to join the blissfully-unaware kite flyers at the top of the hill.

Staying high and as far away from cows as possible, this first leg was more about dew ponds and disused farm buildings than it was walking through villages. The Belas Knap Long Barrow – a restored and impressive Neolithic site once home to the remains of 31 people – was a welcome rest stop and a real highlight before the winding descent (via one of the muddiest fields I have ever crossed) to the photogenic town of Winchcombe. I was really intrigued by the little details dotted around, such as glass show cabinets set back into house walls, which took on a rather sinister cobwebby Halloween theme when we were there. It was good to catch sight of the Gloucestershire Warwickshire Steam Railway too, pulling into the station.

By walking door to door rather than taking the more sedentary driving tour of the area, we were treated to a bit of a hero’s welcome on the first night. It seems that straying off the tourist route is to be applauded, and the pub locals’ ears were pricked by our tales of the mud, mayhem and mighty monuments that sit right on their doorstep. We, on the other hand, were more excited to be exchanging mud for their toasty fireplace and wholesome pub food, which provided the cosiest of retreats from the elements. 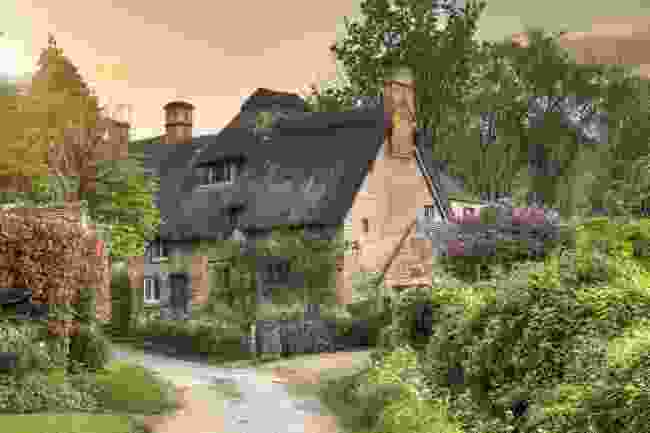 I’d thought I’d covered most types of ground in my lifetime, from well-manicured estate parkland, paddocks and pasture to common land and woodland. But, after tearing ourselves away from the warmth, the cooked breakfast and the morning coffee, my husband and I found ourselves crossing a ‘ridge and furrow’ field for the first time. Ribbed green ridges transported me straight to the rice terraces of Vietnam not to a field close to a War Memorial on the outskirts of the tiny village of Stanton.

While evidence of a medieval ploughing system doesn’t quite make the list of Cotswold wonders, day two is so full of interest that taking the longer 17km route is something we, if not our legs, were very glad we did. With the remains of a Cistercian abbey at Hailes, Cromwell’s Clump (interesting name for a hill fort), a seemingly-endless avenue of trees climbing open hillside and great views, the 408m ascent is worth those extra kilometres.

In fact, it’s the buildings and architectural details that I will remember most from this day in the fresh air. Stanway House may be the one on the OS map, but the nearby Watermill and even the cricket pavilion (with its curious mice-proof design) – not to mention the old-fashioned street lamps at Stanton that look they belong to another era – had us reaching for our camera. This had the effect of making that wide street at Broadway a beautiful journey’s end and delicious dinner spot, rather than the main event.

If ever I needed a reason to climb a hill and burn off a few calories from the night before, Broadway Tower is it. For it’s not just a tower (or folly), but an entire experience, complete with its own nuclear bunker, resident red deer herd, 50-acre estate and William Morris and Capability Brown café. Tempting as it was to linger, we had one goal in mind for day three and that was the detour.

After spotting two typographs, climbing to Dover’s Hill and heading down the lanes to the house where Graham Greene once lived, we found ourselves walking out the other side of Chipping Campden (our home for the night) in search of Hidcote Manor – or rather its garden. Its warren of garden rooms and arts and crafts-inspired design joyfully justified the decision to turn a straightforward 9km section into a 27km one. There was almost certainly a quicker way, but we sadly didn’t find it because the detailed route notes were clearly not prepared for walkers wanting to treble the day’s mileage in search of a few well-coiffed hedges. The curry and the log fire that night did much to ease our protesting muscles.

The following day, my legs would have much preferred a rest by the roaring flames but, after spending the morning wading through a patchwork of muddy fields, descending into Blockley is a moment I’ll never forget. For in this quiet, unassuming village, I found all the Cotswold character I’d come to expect from the towns and villages that I’d purposely set out to avoid. The only difference? No crowds in sight. It felt like we had the magic of the Cotswolds to ourselves – just for a moment. It felt worlds apart from the busy Batsford Arboretum nearby as we continued on the walk into Moreton-in-Marsh. 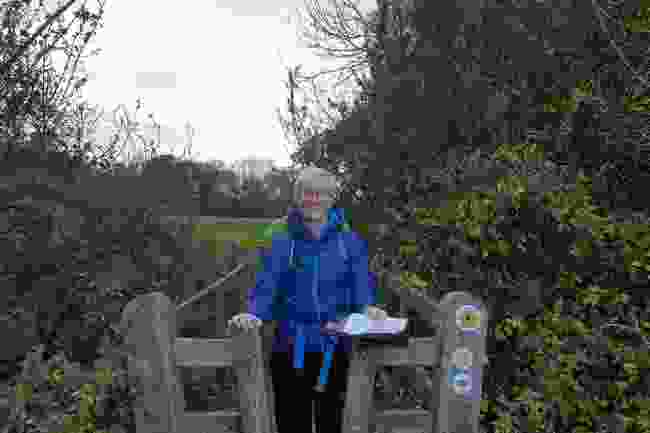 Following the route mid-week, out of season, there were times when we didn’t see another soul for kilometres, barring the odd dog walker. This splendid isolation made us appreciate the landscape and its quirky details all the more – particularly when we found ourselves queuing up for a photo on an Instagram-friendly bridge in Bourton-on-the-Water at the end of day five. That said, at nightfall, when the tourists had left for the day and it was just us, the locals and the sound of trickling water, the village was a sight to soothe even the stiffest of legs.

This would turn out to be especially helpful, given it was over a leisurely meal in Bourton-on-the-Water – which has its very own manicured MINI car hedge – that we had a big decision to make. Do we walk 27km all the way back to Cheltenham or follow a shorter circular route in the local area before returning back to the start via public transport?

It was seven hours later, standing back at the top of Cleeve Common, staring out at clearer skies than on day one, that we realised adding those extra kilometres to the legs was the right choice. It wasn’t the day to get lost. So, obviously we did, although finding ourselves in the centre of Guiting Power village ended up being a welcome diversion. But, with brilliant sunshine, and easier ground underfoot (fields were replaced by lanes for a lot of the walk) it felt like the best way to complete our tour of the Cotswold countryside. We arrived back at the start at the Pittville Pump Room in Cheltenham grateful we weren’t starting it all over again, but even more grateful that we had gone the distance.

So, when we next plan a trip to the Cotswolds, I know what I’ll be taking: hiking boots, a map and an open mind. The Honey-coloured chocolate box charm is always something I will love. But, heading out into the hills and unlocking its secrets, I think I’ve found something I love a little bit more. And, I might just stay in a Bay Tree Cottage for good measure. 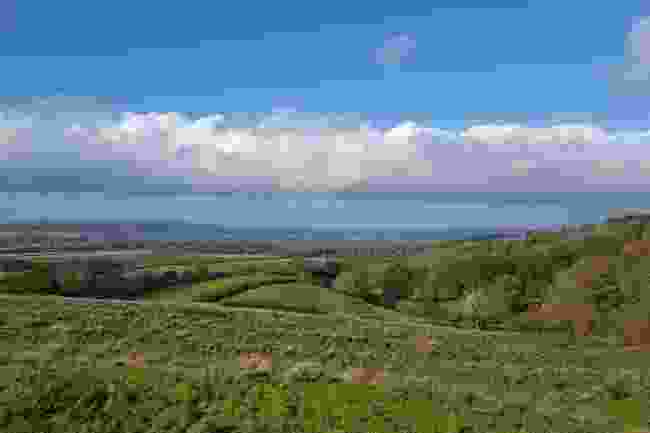 Read more about the Cotswolds:

9 reasons to walk the Cotswold Ring

11 fabulous walks in the glorious Cotswolds

Take a culinary tour of the Cotswolds