Two marabou storks came wheeling overhead, wings like black sails; my eyes followed them until they became dots in the landscape. Mankind began here. That’s the theory. Among the cactus-studded plains and steaming lakes of Kenya’s Great Rift Valley, it’s said that our forebears first graduated from four legs to two.

Hominid skeletons have been found here dating back some six million years, which is a stirring thought to have in mind when you stare out across the valley’s broad rumple of hills and feel the hot equatorial breeze on your skin. The human race picked a pretty special place to start out.

I’d been finding out that it was a special place to walk, too. For the past week I’d been travelling by foot across the valley under gaping skies of blue, clocking up the kilometres by day and camping on riverbanks and hilltops at night. This was not the Kenya of high-end savannah lodges and lion sightings, nor was it the Kenya of beach resorts and dhow boats. 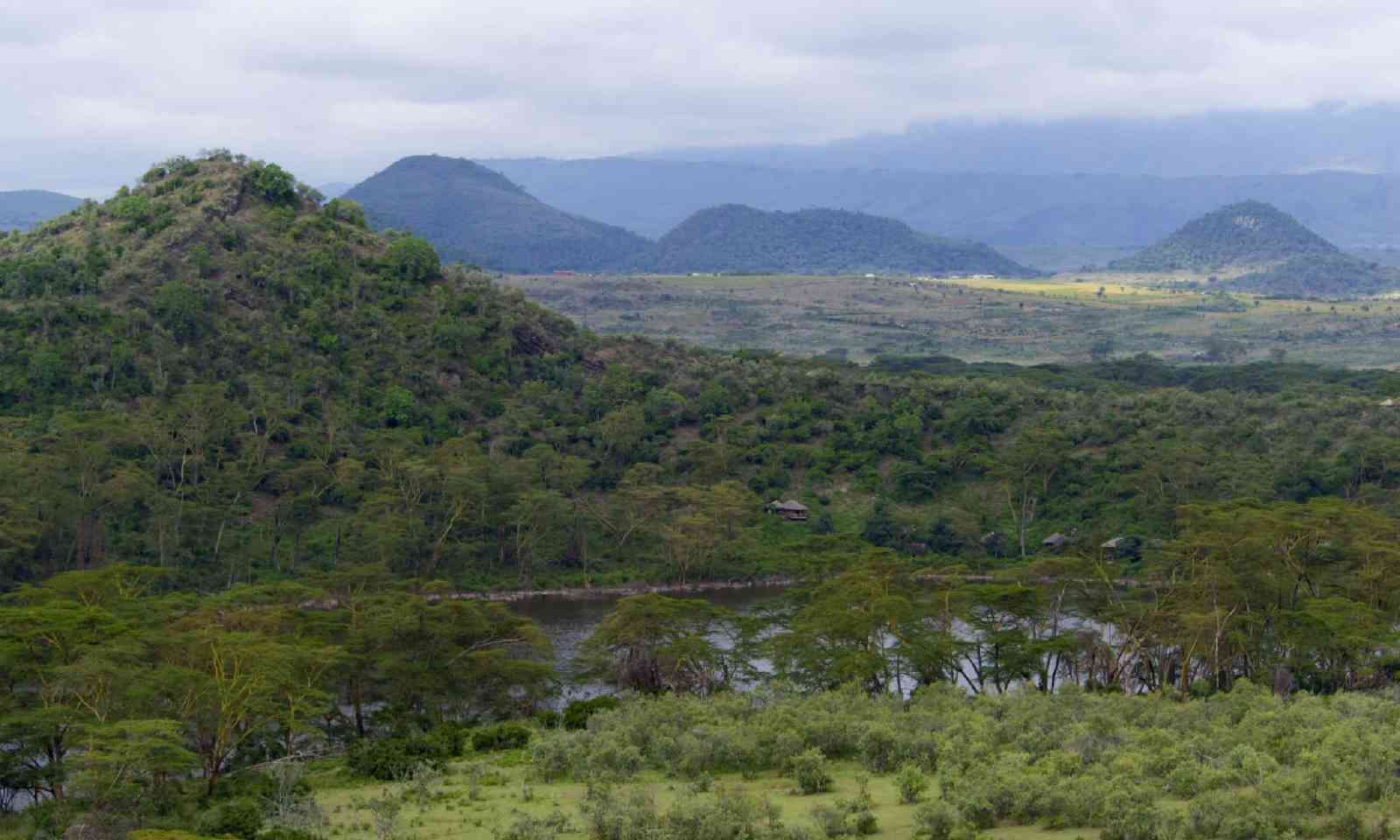 The bushland was punctuated by corrugated iron churches and mud-and-thatch villages. “Little number of tourists here,” smiled my unflappable local accomplice Jackson one morning, after we’d exchanged long handshakes with a goatherd. “Everyone is happy to see us.”

I’d come to western Kenya – around six hours’ drive from Nairobi – to hike the Trans-Rift Trail, a new community-focused project aimed at drawing more visitors to this sweepingly scenic but often overlooked part of the country. The idea behind the initiative is a simple one: the walking trail passes from one side of the Great Rift Valley to the other. Stitching together old grazing routes and trading paths, it follows a 140km route between the valley’s eastern and western escarpments, tracing a cross-section across the basin floor itself, from ridge to ridge. It makes use of local hiking guides, local food and local campsites.

“I see it like a walk back in time,” explained William Kimosop, the trail’s founder and chief game warden of the region. He had a wide grin that made him instantly likeable. “This part of the valley is often called the cradle of mankind, but it was also a magnet for a lot of the great 19th-century explorers, the early pioneers – people like Joseph Thomson, James Hannington and Count Samuel Teleki. They all came here. So you’ll be following in their footsteps too.”

Formed between 30 and eight million years ago as the planet did its best to rip Africa in two, the Great Rift Valley is an immense fissure stretching 6,000km along the length of the continent, from the Middle East in the north to Mozambique in the south. The feature’s now-familiar name was coined by another Victorian-era traveller, British geologist John Walter Gregory, who came to Kenya twice and was astounded by the sheer size of the trench. He declared it ‘the most beautiful view in Africa’.

The valley’s shape also means it forms a natural migration corridor for birdlife, so it was fitting that the week began with me looking down onto a pink-hued panorama. It was October, and somewhere in the region of 700,000 flamingos were resident on Lake Bogoria. 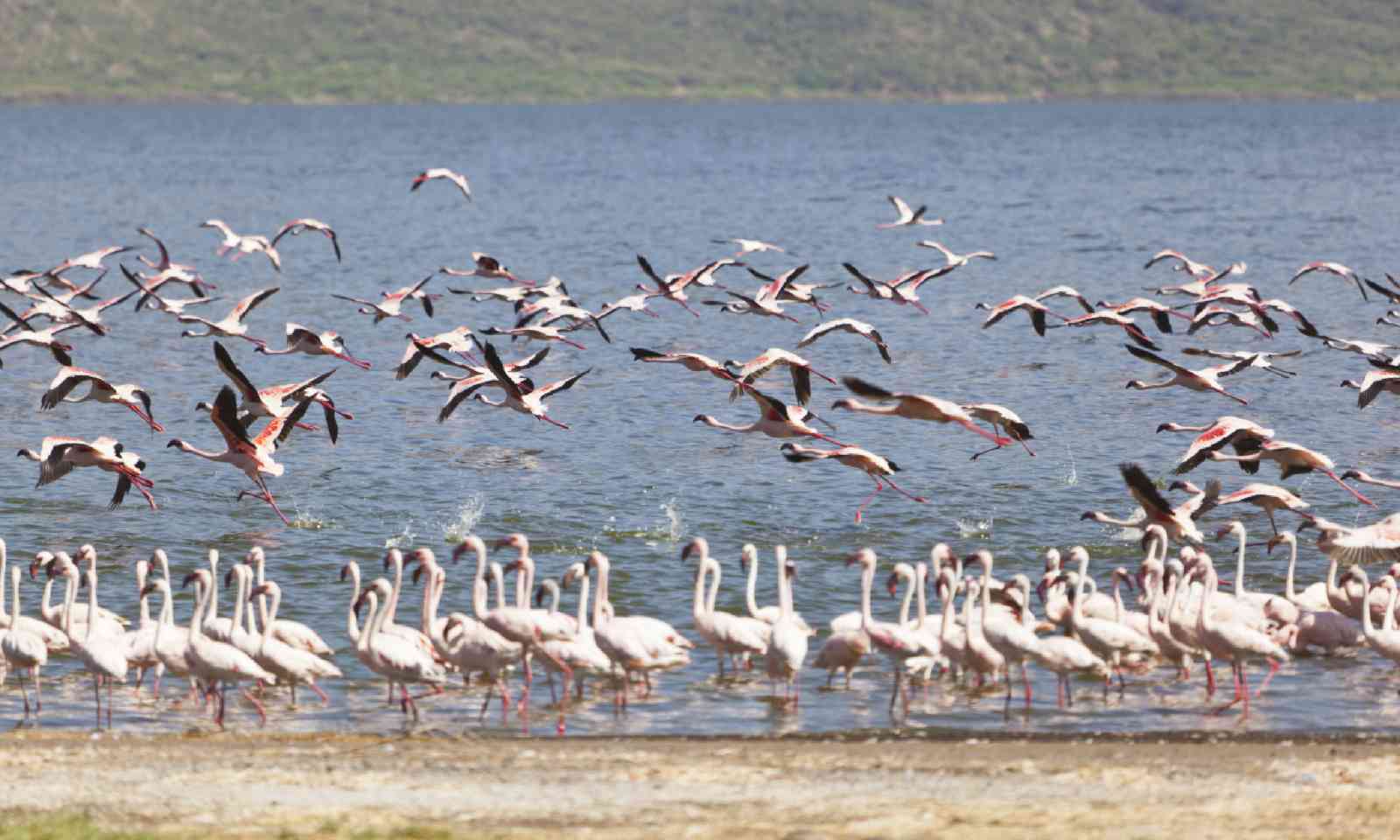 I was standing on the rim of the eastern escarpment, above the lake’s silvery alkaline waters. Vast twig-thin flocks of flamingos were clustered in dense numbers around the shoreline, feeding on the blue-green algae that, illogically, gives the birds their rosy tint. As I watched, several hundred of them took flight – ungainly on take-off, then hard and fast when airborne – to a more distant part of the lake.

Hot springs and geysers frothed and bubbled along the waterside. Pelicans looked on from high branches. The whole scene had a grand, cinematic quality; I was left marvelling, not for the last time, that there was no one else around – no white jeeps, no frantically snapping tour groups – to savour the view.

On that first morning, I felt a little humbled. I’d emerged from my tent with a backpack, sun hat, water bottle and the usual hiking paraphernalia. I was then introduced to Jackson, clad in a smart V-neck sweater and unburdened with such indulgent fripperies as water or even a bag. We were about to embark on a six-hour walk in 30°C-plus heat. He looked like a man about to pop out for a newspaper. He was in his late 50s, and had elongated earlobes that had once held heavy tribal jewellery. “I am like a camel,” he laughed. “I don’t need water.”

But Jackson was to prove himself the perfect hiking companion, owl-wise and tireless. As the trail wore on and the two of us were joined each day by guides local to the particular communities we were passing through, he kept spirits high and bearings accurate. When need demanded it, he even started carrying a rucksack. I was crossing the Great Rift Valley in his company – open African countryside and starry nights lay ahead. The week would be memorable.


Part of the tribe

It was the third day of walking. There had been a brief rain shower, and the red earth smelt raw and vegetal. Birdsong swirled around us in fluting choruses. In the distance, tendrils of smoke from far-off charcoal kilns curled above the woods. And for perhaps the fifth time that morning, we encountered a local pastoralist ushering stoic, water-laden donkeys through the bush. A look of surprise, a smile. “Chamgei!” came the greeting.

I had packed a Swahili phrasebook for the trip, but should really have known better. Swahili may be one of the country’s two official languages (alongside English), but this was Kalenjin country, with its own entirely separate dialect. The bush villages we walked through held basic but well-tended homesteads, almost always lacking electricity but flanked by plots of maize and busy with plump livestock. Conical straw roofs marked out family dwellings. The locals we met were open and inquisitive, ready to laugh.

Tribal affiliation is of enormous importance in Kenya, with most people identifying themselves by their tribe first and their nationality second. Many of the country’s well-documented political controversies have their roots in precisely this trait. The area of the Rift Valley that we were travelling through is a long-established homeland for the Kalenjin people, known traditionally as farmers. “And we are runners too,” Jackson told me. “Long-distance runners.”

Big-name international athletes such as five-time world champion Paul Tergat and Dennis Kimetto, who smashed the world marathon record in September 2014, are a source of genuine pride here; several times we were passed by fleet-footed locals – children en route to school, women on their way to the village waterhole, one striding, Nike-clad runner who clearly had aspirations further afield.

It’s said that the valley’s high altitude and up-and-down terrain provide perfect breeding for athletes. Mo Farah has trained nearby. “And the diet is important,” one of the community guides, Chris, explained to me. “The runners eat ugali [maize-meal porridge] and drink mursik [fermented cows’ milk]. It makes them strong.” Mursik, I can report, is thick, lumpy and off-white – and best described as an acquired taste.

Chris also casually informed me that he possessed 400 goats, and the animals were certainly plentiful as we made our way across the valley, not just in the bush but on the dinner plate. Local tour operator East African Eco Adventures was keeping us fed and sheltered, shuttling our tents and provisions from one campsite to the next and creating disarmingly good evening meals from regional ingredients. I’d previously had no inkling that charcoal-roasted goat could be so tender, nor that river-caught catfish was quite so moreish. Such were the joys of walking up an appetite. 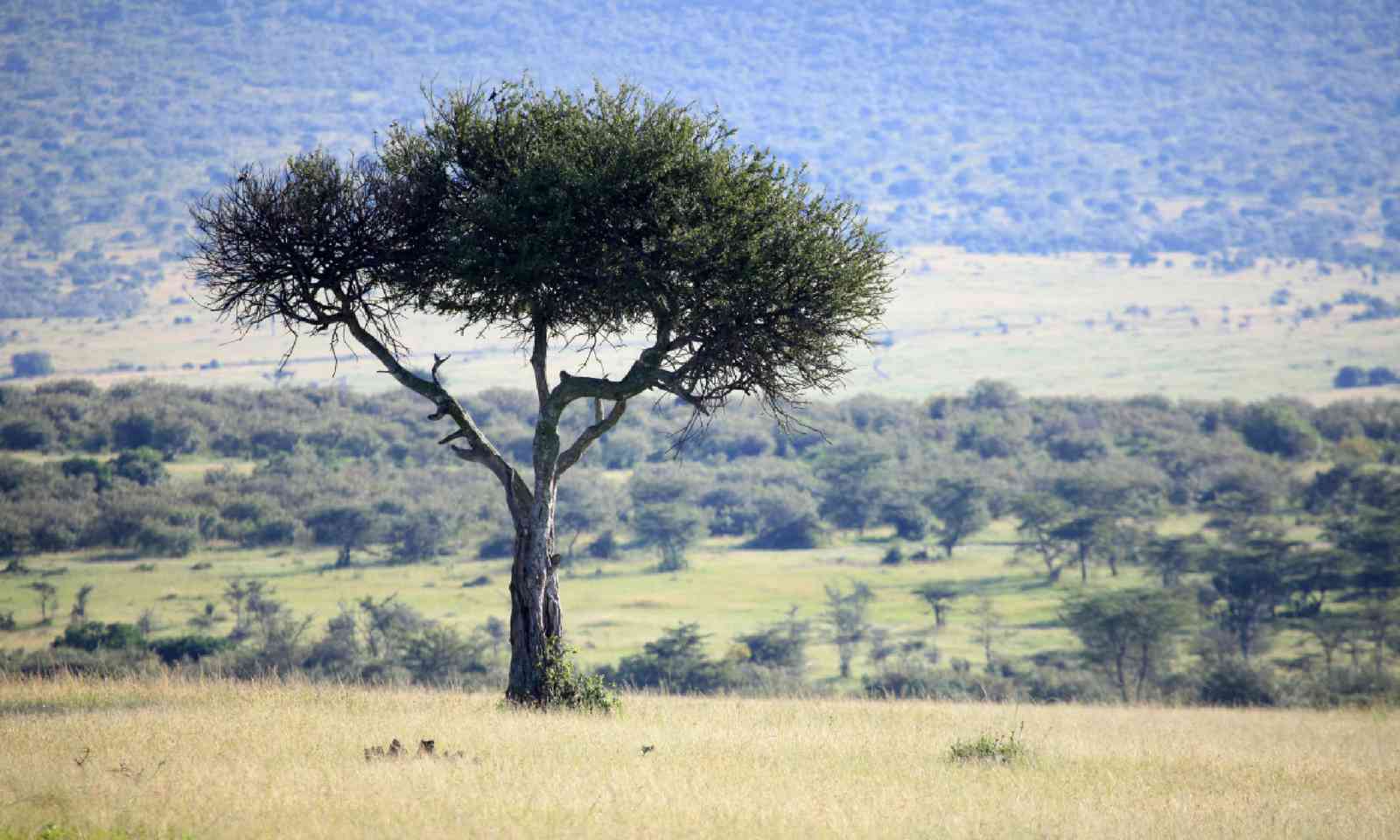 Our campsites varied greatly – on one night we slept under the stars, bedding down on top of an old Land Rover – and the landscapes were just as diverse. On the scorching valley floor we walked among thorny scrub and flat-topped acacia, while in the highlands we wandered through cool pine groves, treading a path between tomato and coffee plantations. Flowers shone from the undergrowth. Huge views tumbled out and down, full of green slopes, farming terraces and rippling rock formations. It struck me that some things would have changed little since explorers such as Hannington and Thomson were here more than 130 years ago.

The walk held magical moments. On the evening that we reached the village of Maji Moto, a luxury was revealed in the form of a natural thermal rock pool. We tore off walking clothes and sank into the deep, warm waters just as fireflies were emerging from the trees. In the Great Rift Valley, the days of hiking are long, sometimes shatteringly so, but they’re more than worthwhile.

Somewhere in the folds of the Tugen Hills, the belt of peaks that runs down the middle of the valley, there lives a young boy named Tonyblair Jepkurui. His mother Ester had joined us for our penultimate day’s hiking. “No, we don’t admire the man,” she told me patiently, resplendent in an emerald-green Kenya football shirt. “We just admire the name, from the news. We wanted a name that was different.”

The former PM isn’t the only Brit to have made an impression of sorts here. In 1955, the Queen – then Princess Elizabeth – famously had to cut short her holiday to Kenya when her father died. One of the spots she was due to visit was a campsite high in the hills, now known as the Royal Camp. When we arrived there mid-afternoon, a group of 80 local girls on a school trip were stood singing gospel songs. Their voices spilled up into the sky. At first light the next morning, meanwhile, Mount Kenya, Africa’s second-highest mountain, stood noble on an orange horizon. A site fit for royalty? No question.

The week continued to produce surprises. I knew that the Big Five didn’t frequent this part of the Rift Valley, so hadn’t expected much wildlife. I was wrong. “Look, zebra,” said Jackson one morning – I followed his finger and saw four nearby in the bush. More animals were to follow. We saw tortoises, mongooses and monkeys. Pairs of dainty dik-diks sprang up rocks. Baboons lumbered across the trail. Gentle impala drifted away from us. The birdlife was remarkable too: yellow-billed hornbills, lilac-breasted rollers, green wood hoopoes and my personal favourite, the white-bellied go-away bird.

At times, the heat was an issue. Midday in the tropics is not always a great friend to hikers. But it’s worth noting that walkers aren’t obliged to cover the entire distance – half-day treks and 4WD pick-ups are easily arranged if desired. Indeed, when Jackson and I reached the main tarmac road that stretches up the Rift Valley from Nairobi to South Sudan, we opted for a vehicle transfer rather than an hour of roadside hiking. “The trail can be as hard as people want it to be,” William had told me. “Crossing the valley is the important thing.”

When we clambered and clawed our way up the valley’s 3,000m-high western escarpment to finish the trek, I felt the sense of achievement that comes from completing a long, hard yomp. As much as the landscapes had been magnificent, however, the people I met along the way will linger in the memory for just as long: the softly spoken man who had turned production of the local honey, garnered from basic log hives, into a community cooperative; the beaming woman who rushed chai tea and chapatti flatbreads out to us in the lunchtime shade; the 70-year-old who had been walking this same trail all his life, and had four wives and 25 kids to show for it.

Hotel beds and hot showers awaited us on the final night. Breakfast the following morning was on the balcony, looking back across the cloud-patched valley, back across the cradle of mankind. “The Kalenjin language has no word for goodbye,” Jackson had told me earlier in the week. “Only thank you”. It seemed apt, somehow.