Beyond Vancouver Island on Canada's west coast lies an archipelago dedicated to the good life – and tailor-made for ferry-hopping, bike-riding exploration

4 mins
There is a story they tell about a Scottish engineer on the old Saanich Inlet ferry on Vancouver Island. Not long after the service began in 1924, the ship was sunk at her dock by ice, leaving only her funnel showing. When the engineer scrambled onto the wharf, he was asked whether he was all right. “Aye, fine,” he replied, “I have my tools.”

This says a lot about the kind of characters who went west as far as they could go, and settled on an island populated by bears, wolves and native Indians, none of whom were particularly glad to see them. They were hardy, independent types who came seeking land and fortune, and found both in a wilderness bigger than some of the European countries they came from.

Even now, it is not a good idea to venture alone into remote areas of British Columbia’s Vancouver Island, which still has the highest concentration of cougars in the world. A few years ago one turned up in the underground car park of the Empress Hotel in Victoria, the capital, and had to be escorted out after being given a hefty tranquiliser.

For those who found even this outpost of British imperialism too civilised, there were the Gulf Islands, a mosaic of rocks and mountain tops scattered in the Strait of Georgia east of Vancouver Island, like stepping stones from mainland Canada. They still attract odd characters who prefer the company of eagles to people, and a laid-back lifestyle that combines echoes of the pioneering spirit with good pubs and grub. When you are sitting in a timber-frame house surrounded by giant firs, watching herons glide over a tranquil inlet, there is a sense that life is pretty much sorted. 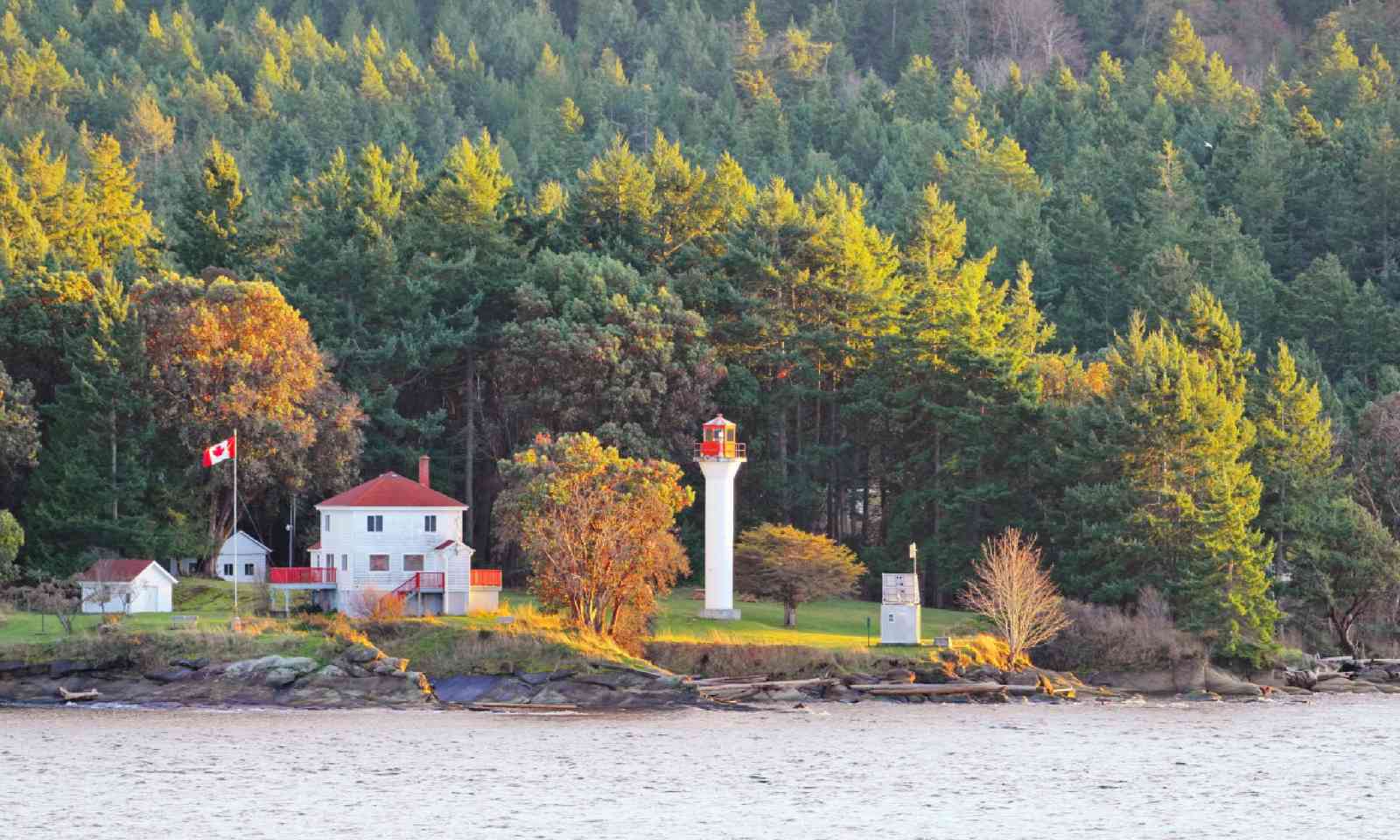 Light House in the Strait of Georgia (Shutterstock)

On arrival, I discovered that the best way to explore these remote isles is using a combination of boat and bicycle – and, thanks to a decent set of wheels and regular ferries, I managed both in comfort and style. Granted, I could have hired a car and driven a few miles to the nearest ferry, but it’s more fun on two wheels.

Most of the islands are small – the largest, Salt Spring, is only 25km long by nine at its widest point – the roads are narrow, and a gentle pedal is just about the right pace to enjoy the changing vistas of sea and forests. Also, the inter-island ferries are busy in summer and, while your car might not get on the last boat of the day, there’s always room for a couple of bikes.

I generally prefer investigating on my own, but it can often be enriching to have someone with local knowledge on hand. So, for my two-wheeled exploration, I enlisted the services of Greg, an enthusiastic pathfinder who knew quiet back roads, scenic coves for picnic lunches, and – perhaps most importantly – ferry timetables. All I had to do was limber up my cycling muscles while Greg worked out a three-day route that would take us from Vancouver Island to Salt Spring, on to Mayne and Pender islands, and back to Vancouver Island by a different crossing.

It was a while since I had done any serious cycling, which may have been apparent to Greg, who graciously set a leisurely pace that allowed time to admire the bird sanctuaries and farmland from the cycle path that led us out of Victoria. When we were overtaken by a jogger pushing a pram, it was a reassuring sign we had switched to island time.

The Seahorse Café in Brentwood Bay was the perfect place to ease the saddle soreness of the first few miles, and to appreciate why people choose to live here. We sat in the sun, on a timber platform projecting over the water by an old pier. Views of the wooded hills and islands across the Saanich Inlet stretched into the distance while the air rang out with birdsong and yacht halyards clinking on masts like wind chimes – it is not what you would call a bustling port. 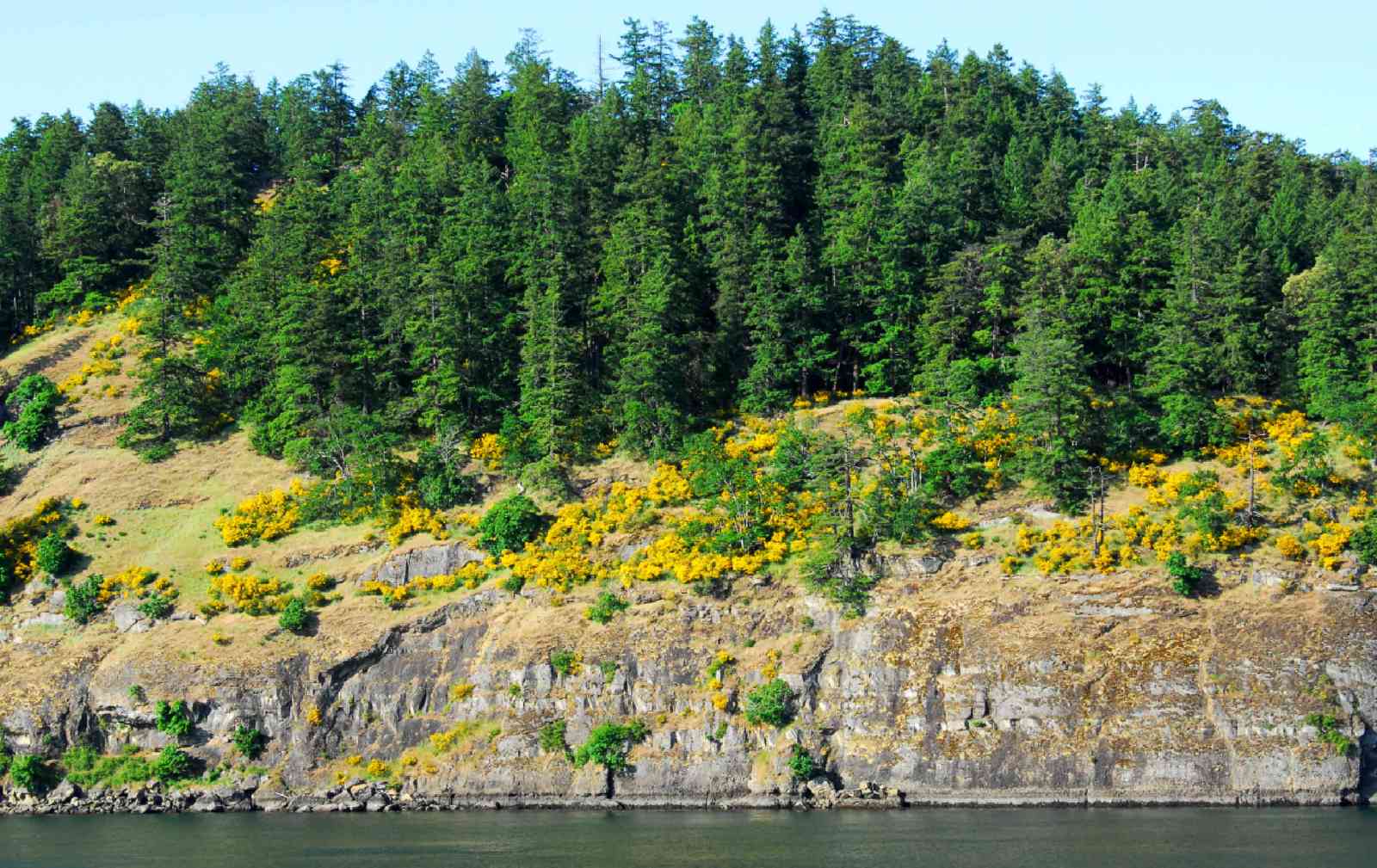 The ill-fated tramp steamer serviced by that phlegmatic Scots engineer was eventually replaced by a custom-built ferry, which has been chugging over the five-kilometre run to Mill Bay at a steady eight knots for almost half a century. A sign on her wheelhouse says ‘Welcome aboard Vancouver Island’s most beautiful shortcut’, and it is not an idle boast. The seascape around her is reminiscent of Scotland’s Inner Hebrides, with more trees and sunshine, and a maze of backwaters that beckon to be explored.

That evening we dined by moonlight across a bay from the small town that gave the world Baywatch babe Pamela Anderson. Of more interest was an older lady with sleeker lines, who will doubtless age more gracefully – Dame Patty, a 70-foot racing sloop that competed for the America’s Cup in 1967, was moored below us. She was once the second-fastest sailing boat in the world, and I was admiring her rakish beauty when I became aware of something hovering above me. From an upper branch of a Douglas fir, the seared salmon on my plate was being observed with interest by a bald eagle.

Edge of the world

The port of Crofton, our point of departure for the Gulf Islands, had the feel of a frontier community clinging to old livelihoods of lumber and fishing. Its harbour was filled with tough, chunky boats sprouting webs of metal rods that serve as stabilisers in heavy seas. They were purse seiners and trawlers whose names told of the sea conditions they work in: Endurance, Ocean Gambler and Crazy II.

Even the few sailing boats among them looked like they’d taken hard knocks. But the natives are friendly: the woman selling tickets for the ferry regarded our bikes enviously. “Nice islands you’re heading for,” she said. “Sure wish I was goin’ with you. Any time you want a passenger on a tandem, let me know.” 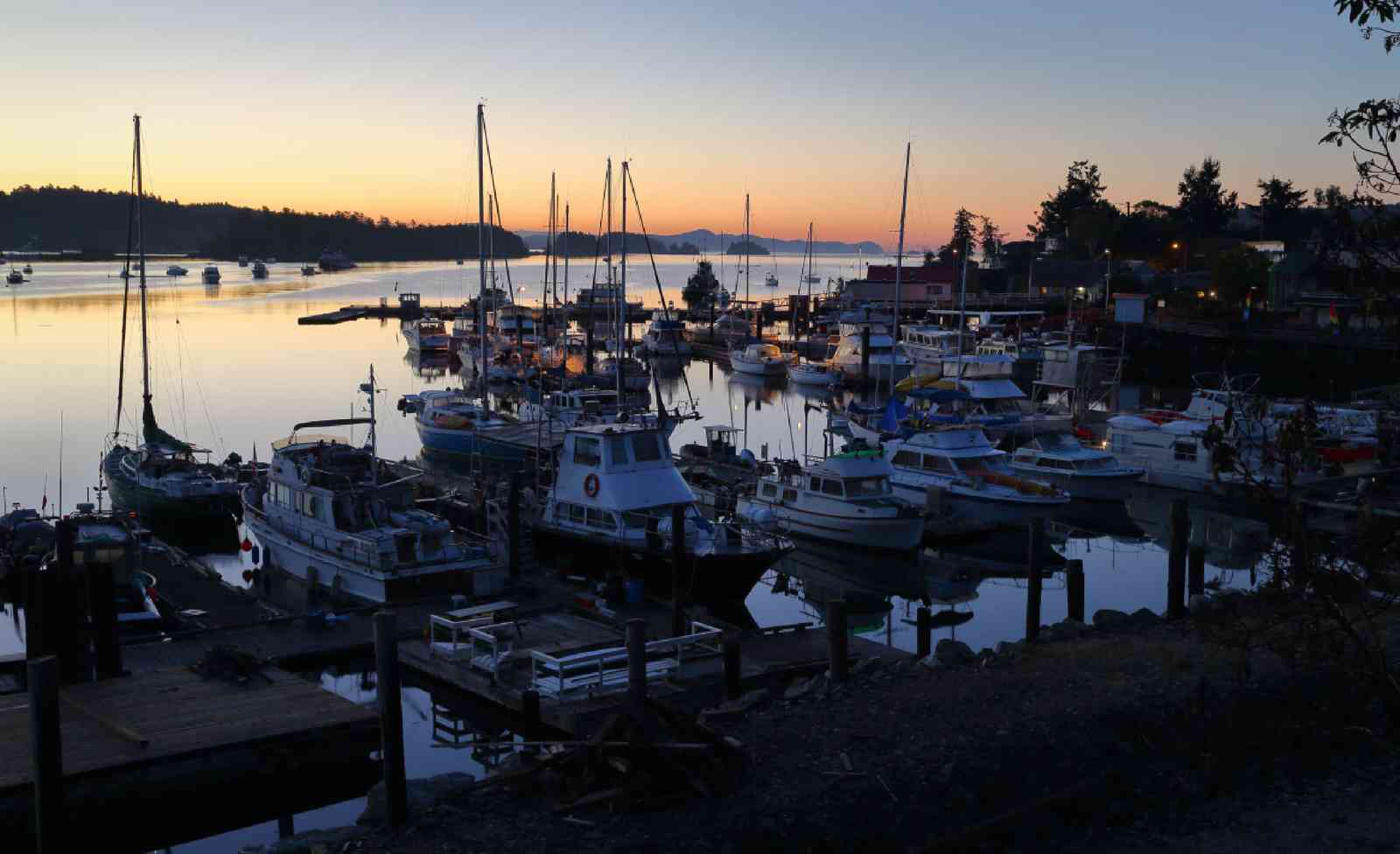 Most of the people who live on Salt Spring Island came to escape the stresses of urban society. Their numbers were swelled by US draft dodgers during the Vietnam War, and then by a mish-mash of hippies, pensioners, artists, musicians, ecologists and professionals of the computer age. A local guidebook concedes: 'We do perhaps have a higher proportion of people who have chosen to pursue alternatives to the mainstream lifestyle.' Greg had a more succinct view: “Beads and weeds, we call ‘em.”

In fact, the community is more crafts and cappuccinos. On Salt Spring, pedalling along a quiet, winding road by the sea, we stopped at a woodcarving studio owned by Don and Bab Arnett. Using local wood, Don carves figures of people, animals, boats and anything else that takes your fancy, and Bab paints them. A yellow dolphin? No problem, sir.

We chatted with Bab for a while amid the paint pots, and she told us she is more content here than she has ever been. “It’s nature, the pace of life, and like-minded people. Good company if you want it, and no hassle if you don’t.”

Before leaving I bought a figure of a boy wearing a baseball cap and T-shirt, with a slogan that said: ‘question authority’. Don said he copied it from a shirt his son came in wearing one day. “Says something about the kind of folk who live here,” he concluded.

By now we had been joined by Andrew, driving the back-up van, and he offered us a lift over the hilly terrain on the south of the island. Salt Spring has the highest mountain in the islands at over 600m, and even its lower slopes can be taxing for those long out of the saddle.

But by the second day I was enjoying pootling along at my own pace, and managing the short uphills between flat coastal stretches without breaking sweat. However, it was good to know that Andrew wasn’t far behind in the event of a puncture or time running short for a ferry connection. 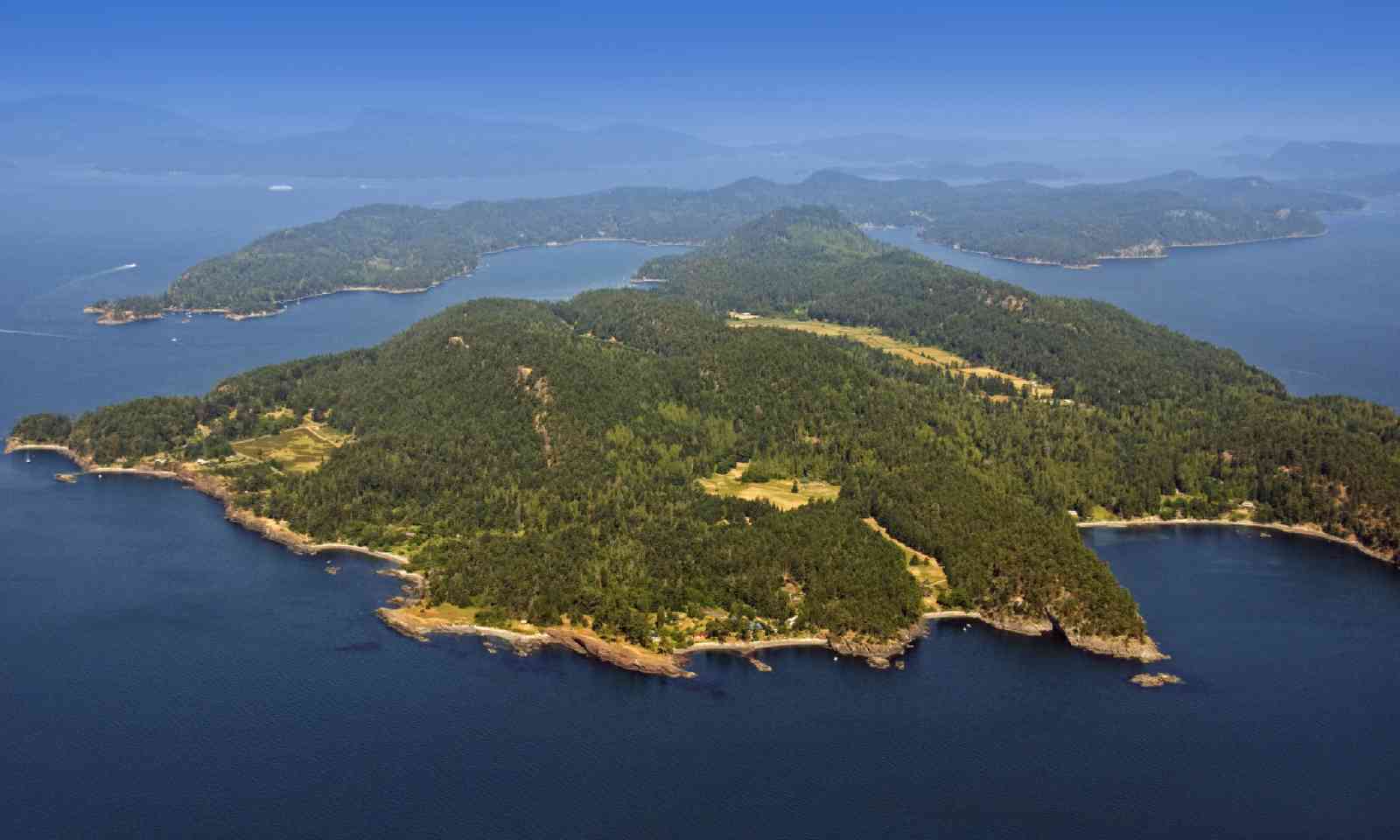 On Mayne Island (population: 950), they have an expression: “Ferry’s in”, used when more than three cars are seen driving in the same direction. Here, the only reliable timekeeper is the tide. People chat at checkout counters and petrol pumps, and sometimes with cars idling in the middle of the road. The following exchange has gone into local folklore: “Hey Pete, d’you have the time?” “Yeah, I think it’s Monday.”

Their neighbours to the south, on Pender Island , are equally laid-back, having given up harvesting timber and fish for gentler pursuits, like making pottery and dried flowers for tourists.

Cycling here was a leisurely affair on undulating country roads, with glimpses through the trees of wooded isles in blue water, and in the distance the snowy peaks and glaciers of the mainland. The air was suffused with the scents of pine and seaweed, and the verges were dappled with orchids and lilies. A car might come by every ten minutes or so, or it might not.

After only a couple of days’ cycling, it was clear what brings cyclists here: the fresh air, views to far horizons, and the hum of tyres and well-oiled chainsets in a silence undisturbed by the infernal combustion engine.

I felt I was stepping back in time, and was particularly glad I had come on two wheels instead of four when a couple of boys stopped us and offered to show us an eagle’s nest in their back garden. There are birds everywhere – a vulture pecking the ground ignored us as we cycled by, and while I was trying to take a photograph of a yacht sailing by a lighthouse, a hummingbird appeared and hovered in front of the lens.

No two houses on Pender are the same, reflecting the characters of the people who live in them. As long as they stick to natural materials that blend with the landscape and stay lower than the trees, it seems they can create pretty much what they please. Which is what they do, enjoying space and independence in timber homes standing alone in rocky coves, signposted by numbers nailed to trees. Given the quirky nature of the place, it came as no surprise to find that Pender Island hosts the annual Invitational Disc Tournament. This takes place on an 18-pole disc park – the frisbee equivalent of a golf course – on which competitors aim for poles rather than holes. Serious players carry bags with discs of different sizes and weights for different shots and conditions. Needless to say, use of the course is free.

I read the noticeboard, which boasted boats for sale, dates for farmers’ markets and talks on reflexology in the church hall. Tourism is making inroads – guesthouses are springing up with names like Gnome’s Hollow – but there is still a strong sense of community. Everyone – be it mainland defectors like Don and Bab, or intrigued tourists like me – comes here to chill out, and by and large they find themselves among kindred spirits.