Taking the train to Mandalay

A new border crossing, an old, notorious trainline, modernising worlds, ancient scenes – the rail and road ride from Bangkok into Burma is a journey through time

With shirts wet against our backs we reached the brow of the hill. I could finally see the view. And it was magnificent.

The vast sweep of the Salween River delta stretched at our feet towards the setting sun – red as a blood orange and leaking colour into the horizon. Crimson light shimmered off myriad streams, silhouetting stands of coconut palms and a distant boat ploughing a tiny, glittering wake. Mawlamyine city was off to our left, its towering pagodas brilliant as glowing embers in the dying light.

Low mist rose from the scrubby forest below and sound drifted up towards us – the distant tinkle of prayer bells swaying in the gentle breeze, a yell from fishermen casting their nets, the chatter of a passing parakeets. ‘Mist on the rice fields, the sun droppin’ slow, the tinkly templebells…’ Kipling’s poem was ‘long ago an’ fur away’ – but I understood his Victorian soldier stuck in winter London, and longing to be in Mawlamyine, on the road to Mandalay.

I’d set off on the road four days previously, beginning my journey a country away in Thailand amid the skyscrapers and rushing highways of 21st century Bangkok. I was nursing a hangover as I travelled to Thonburi railway station for the train to Kanchanaburi.

The new border crossing into Burma lay there, at the start of the Kwai Death Railway built at the cost of thousands of Allied lives – immortalised in the 1957 movie Bridge Over the River Kwai and, more recently, in Richard Flanagan’s 2014 Booker Prize-winning novel, The Long Road to the North. 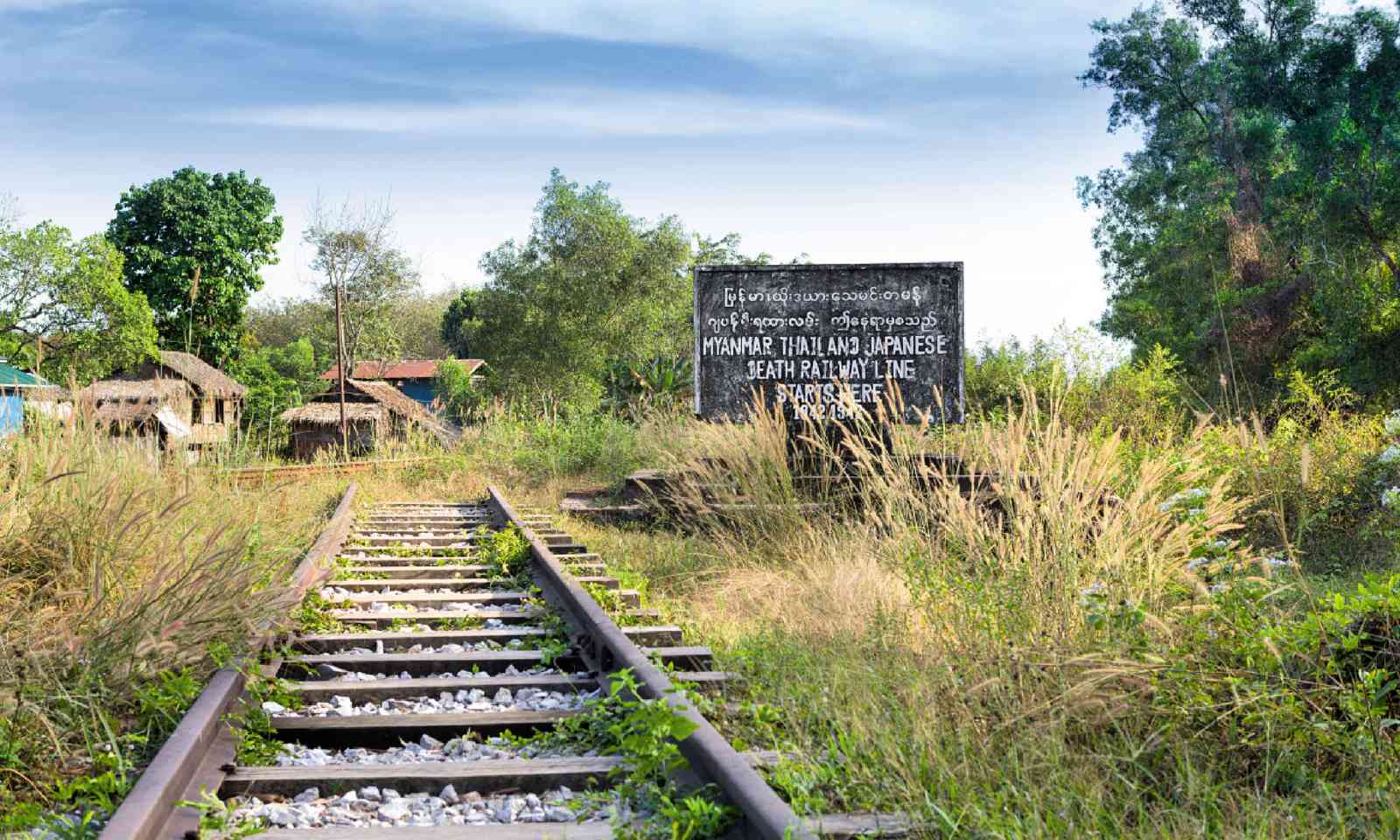 I’d been enthralled by the book and by dreams of Burma fostered by Kipling. I planned to follow the Death Railway’s route as far as I could, crossing David Lean’s famous bridge, entering Burma and connecting with the old British line that rattled on to Mandalay. Burma, people told me, is changing. Come before it’s too late, and take the train to see the real country.

As I drifted out of Thonburi, Bangkok’s skyscrapers faded through factories into suburbia. We sped up and a rushing highway streamed past, a newly built Buddhist temple and paddy fields farmed by tractors on huge spindly wheels. We began to climb into forest-covered hills and two hours later we slowed, slipped and shuddered into Kanchanaburi.

The station was right next to the Bridge over the River Kwai. It was tiny – an undulation of steel arches on pillars over a sluggish brown stream. Then I remembered that the film bridge was a fiction. The convicts had built two. This was the only survivor. The bridge was crowded with kids snapping selfies and coach parties of tourists, led by guides with placards. 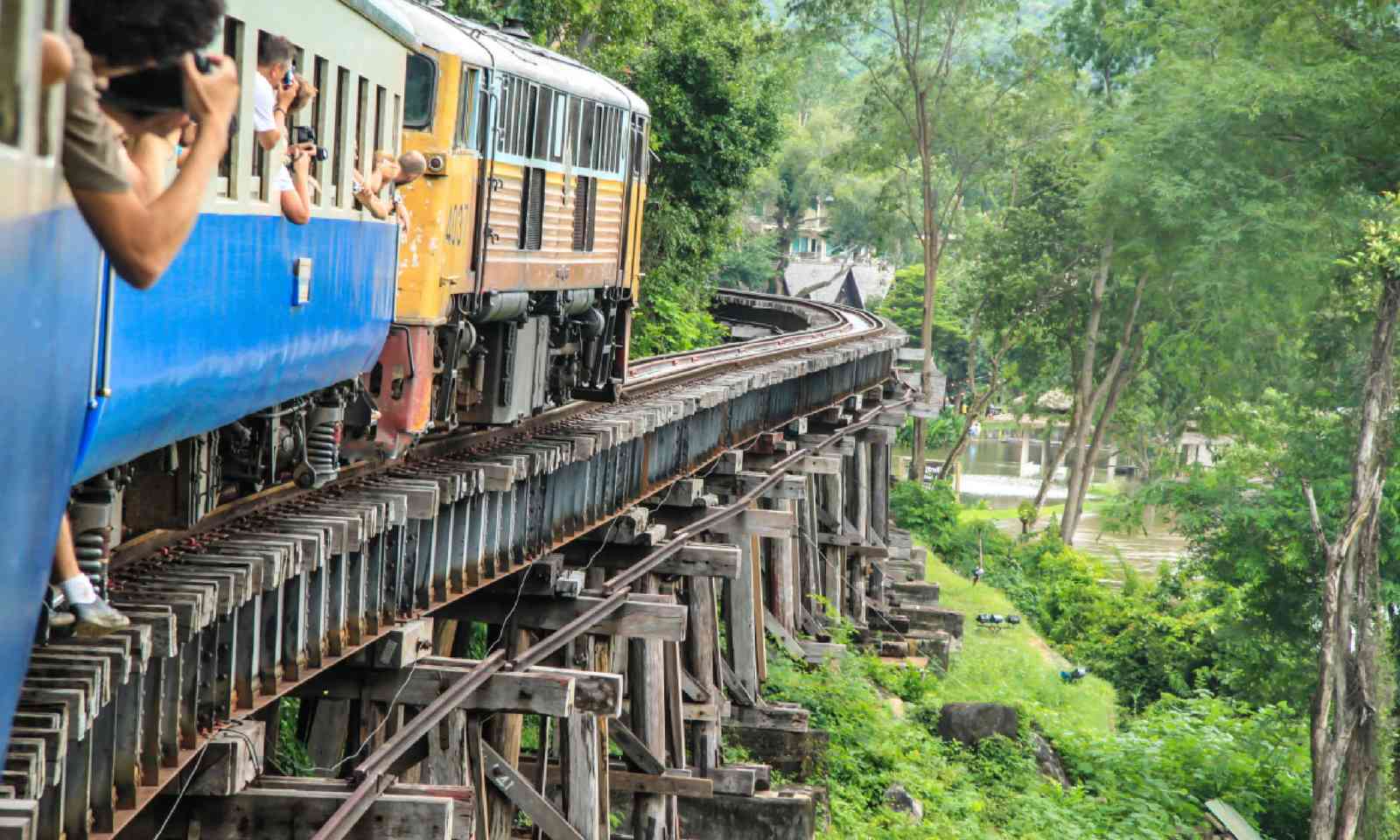 After Flanagan’s book I needed something more sombre, and found it a short cab ride away at Kanchanaburi’s War Cemetery, where ranks of stone graves under a shroud of iron-grey cloud brought home the horror of the Death Railway. I found a namesake – an Australian AJ Robinson, who died here aged 34, a month after the end of the war. His grave was garlanded with fresh flowers.

Next stop: Burma. I caught the Death Railway to the infamous Hellfire Pass, where there’s a sobering museum and monument to the dead. The line stops here so I had to continue by road. In the half hour it took me to leave Thailand and meet with my guide, its surface had turned from teflon-smooth tarmac to rutted dirt.

On the map Thanbyuzayat – and the Burma section of the Death Railway – looked just a little further than Bangkok. I was peckish. Would we be there for lunch? My guide grinned. Chuckled. And then burst into a wicked laugh. “Are you mad!?” he asked in clipped, British English. “This isn’t Thailand. It will take us two days!”

“Welcome to Burma,” he added with a delicious hint of sarcasm, ignoring my Thai wai greeting, grasping my hand warmly and shaking it. “I’m Giovani.”

It’s not a common Burmese name, he told me as we bumped over the road, which dropped down a narrow river valley framed by steep jungly cliffs. He was named in honour of Italian missionaries who founded a school in his Karen village. Through them he found education and a way out of conflict with the military government.

“Burma is segregated into zones,” he told me. “We are passing through a brown zone – run not by the government but by Karen tribes. My village is remoter still – in a black area – a part of Burma the government don’t want visitors to see.”

“Burma not Myanmar?” I asked.

“Burma,” he said emphatically. “It’s what the lady calls it. The military call it Myanmar.” The lady, he told me, is Aung San Suu Kyi, the Nobel Prize-winning opposition leader whose picture sat on the van’s dashboard.

We took lunch in a ramshackle roadside eatery – open-sided and roofed with palm thatch and plastic. I avoided the fragrant monkey curry and opted for chicken. Afterwards I lost myself in what would be the first of many astonishing views: a rushing mountain river cut a furrow through blue-green, rainforest-covered ridges; they stretched as far as I could see. A flock of white birds floated across one of the slopes – like falling confetti.

Then my view was blocked – by a shirtless old man chewing betel nut and looking unsteady on his legs. He gave a big grin, shaped his hands into a camera and beckoned me to an open-sided bamboo shack a few metres away. Inside was a bed, a Buddha, a big clock and a radio. It was home.

He pointed to my camera. I should take a picture. But wait. He needed to dress for the occasion. After tugging a camouflage jacket from a nail hammered into one of the uprights and combing his hair, he slipped on a chunky gold watch, popped a cigar into his mouth. And pulled out a gun.

Before I could even flinch he was in photo pose, big grin, gun in the air. It wasn’t a hold-up. It was a victory photo. I took the shot and showed the old man. He was delighted. These people have fought to keep their country. They want visitors to know. 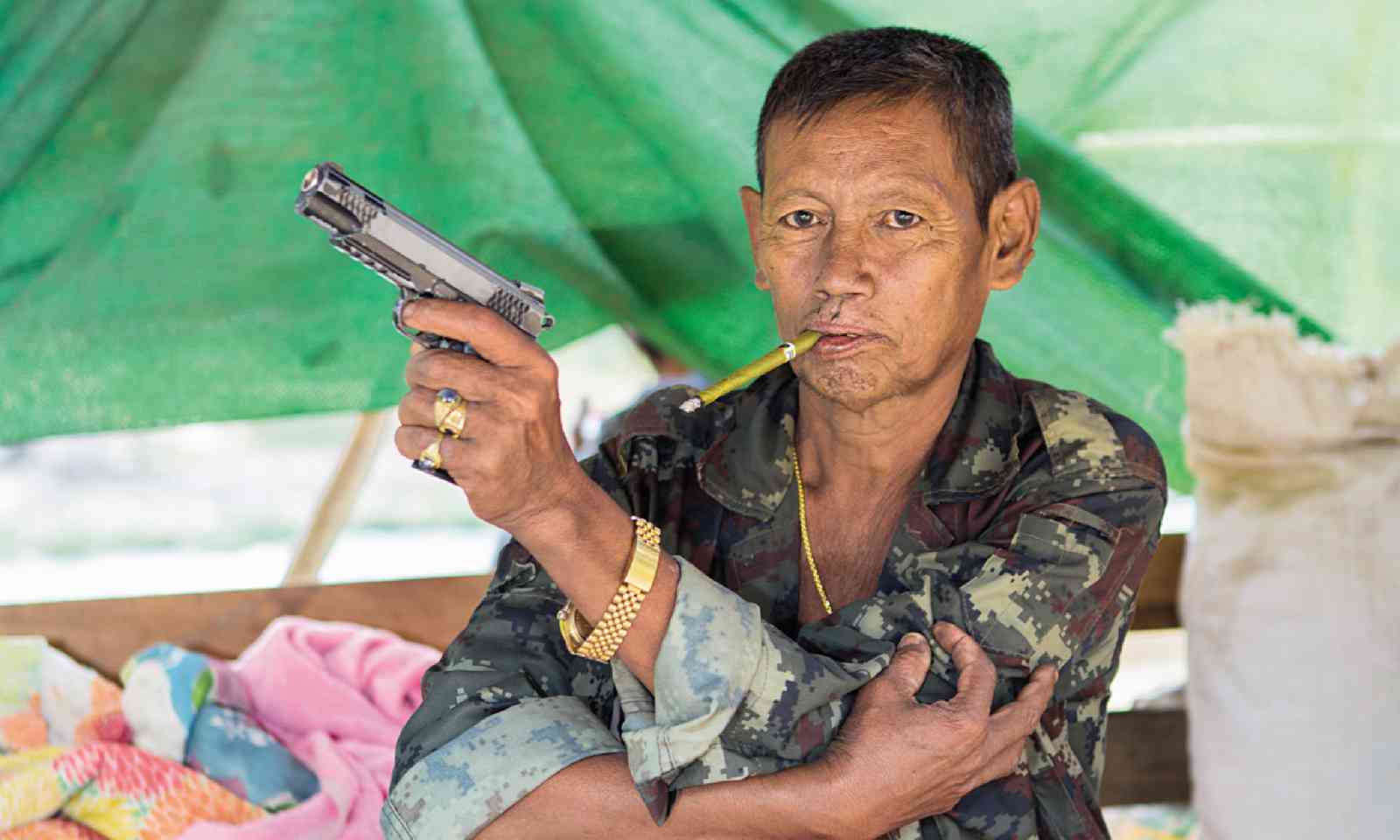 Stories of love and hate

A few hours later we were in Dawei, our first stop. We took dinner in a simple wooden restaurant next to a glorious sweep of pearly-white sand lapped by the gentle Andaman Sea. It seemed to stretch forever – empty but for a huddle of old wooden fishing boats. Tourists were still a curiosity. I attracted friendly stares.

And I attracted shouts over breakfast the next morning – from giggling kids on their way to school. Seeing me through the hotel window they called out, “Hello, whay you from?”

It took us the morning to reach Thanbyuzayat, where a rusting old locomotive stood on the Burmese end of the Death Railway and where I caught my first Burma train – climbing on a carriage that looked tawdry after Thailand, and in need of a clean. But the people were disarmingly friendly, families shared their food, maroon-robed monks welcomed me. And the view was magical.

The flat landscape stretched across a plain humped with domeshaped hills. One looked like a giant sphinx, its 300m-high back bristling with stupas. I saw a huge concrete reclining Buddha sunlit on the side of another. “It’s as long as a football field!” I said. “It’s longer,” replied Giovani, “200m long – the largest reclining Buddha in the world.” 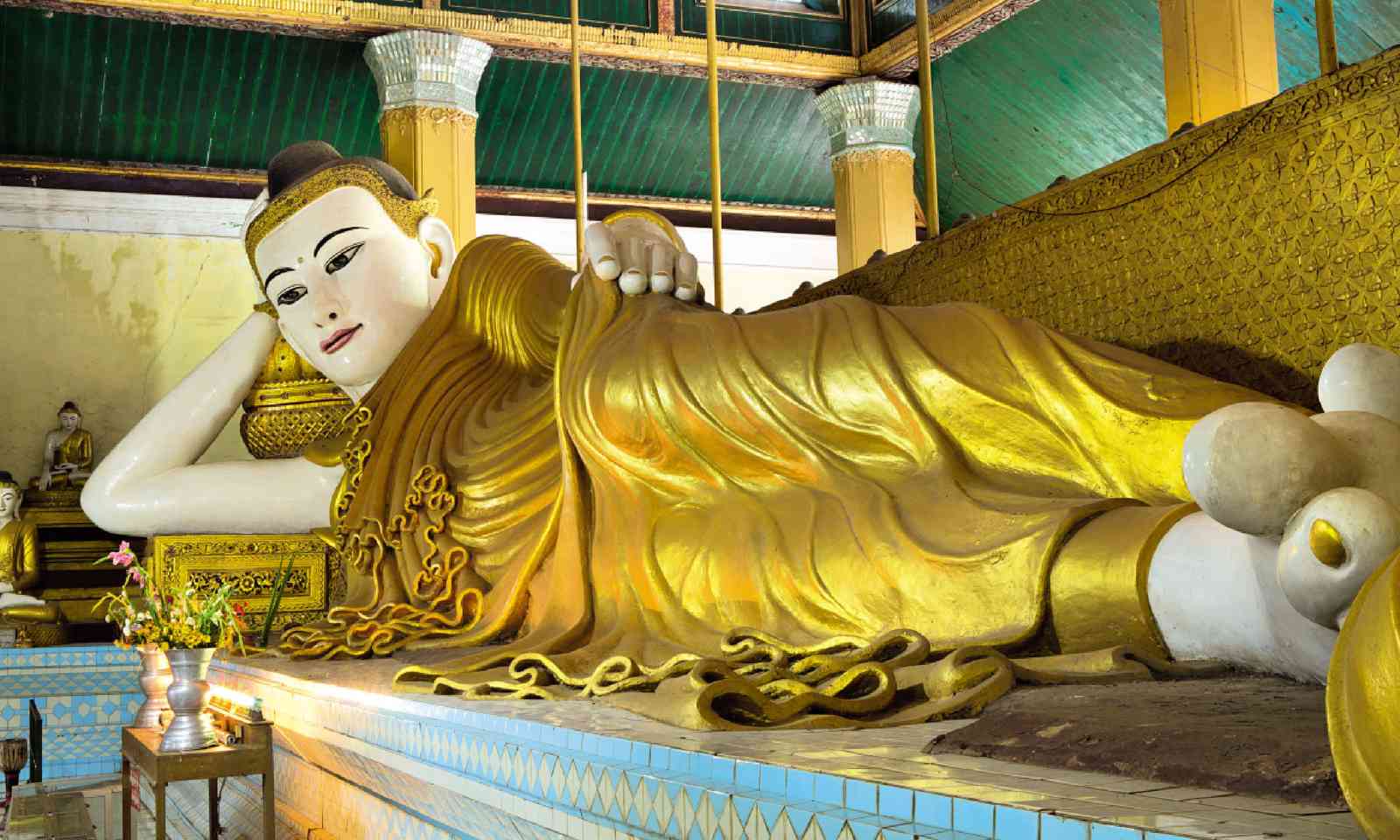 We reached Mawlamyine with sunset, the call to prayer from the town’s twin mosques and the sight of hundreds of Buddhist monks wandering through the street. The next day we explored the city, driving past the crumbling mansions of ‘Little England’ – where Orwell had once been a colonial policeman, ‘hated by large numbers of people’.

We walked the steps to the Kyaikthanlan temple, which Kipling had visited when Mawlamyine was Moulmein – the capital of British Burma. He’d been so smitten by a Burmese woman that he never made it to the pagodas immortalised in his love poem. But we did, finding more magnificent views, hundreds of praying devotees and another love story connected with Mandalay.

After the death of her husband King Mindon, Queen Sein Don had been exiled. Broken-hearted and hundreds of miles from her Mandalay home she shaved her head and became a Buddhist nun, using her inheritance to build a lavishly carved teak monastery next to the Kyaikthanlan temple. She filled it with treasures, including a replica of Mindon’s Imperial Lion throne. 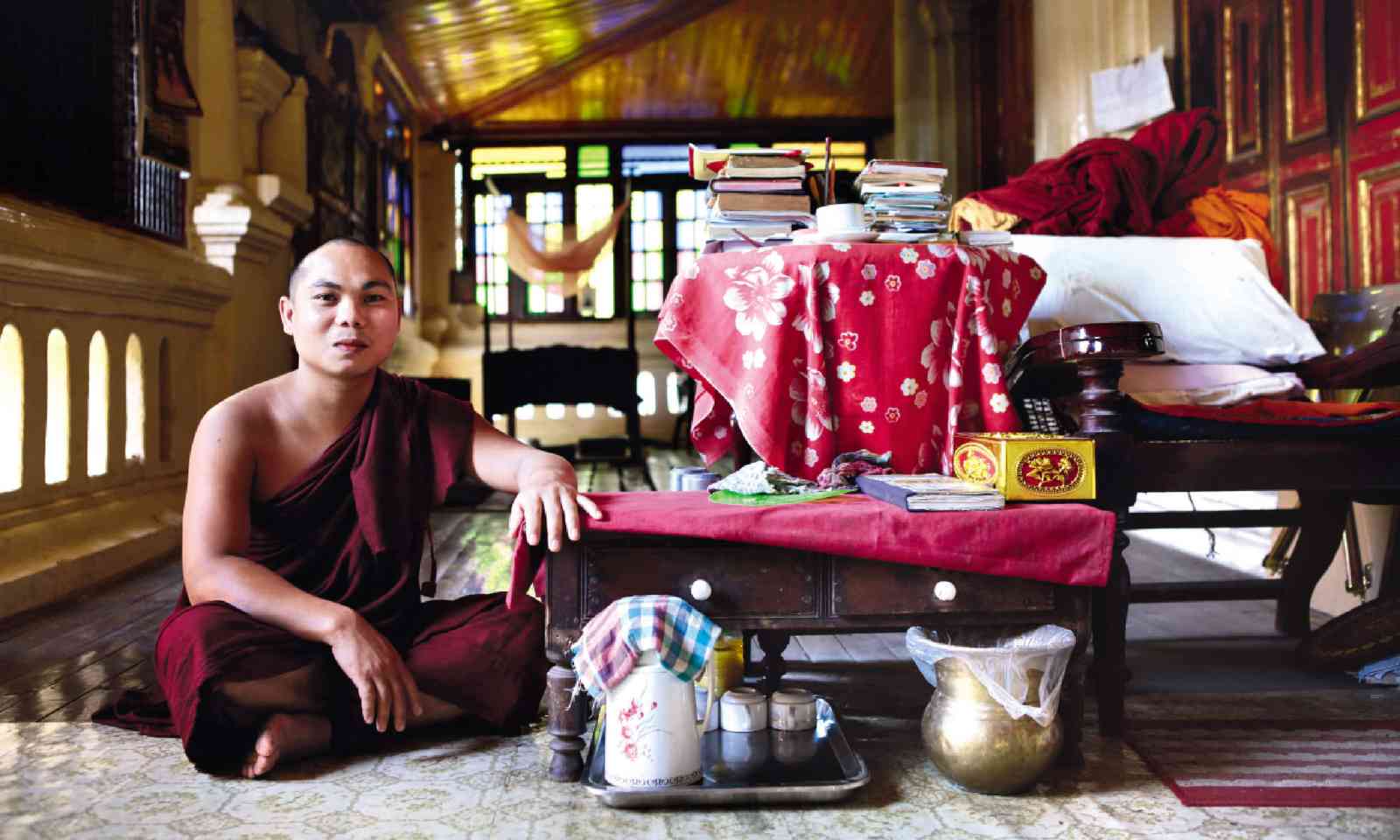 The monastery was empty when we visited – but for one young monk who’d made it his home. He sat on the floor in the wooden corridor, his belongings strewn around one corner of the throne room – blankets piled on a priceless antique gilt chair, a bag of washing soap slung on a teak table, a vest drying on an intricately carved screen.

The Lion Throne sat opposite, an astonishing baroque filigree of swirling lotus fronds and sinuous gold dragons set against a screen of mirrors and ornate statuary.

The next morning I was back on the railroad to Mandalay. The decrepit old Chinese carriages crashed and swung over the buckled rails, which were the original British stock. Burma passed by outside: in dusty lanes where monks sat sidesaddle on mopeds; and in paddy fields dotted with farmers in conical hats and ox carts older than John Constable’s 1821 The Hay Wain painting.

Station platforms were crowded with pink-robed nuns, families migrating with the entire contents of their houses and vendors clutching chickens. The train itself was a moving market. Women hustled through, offering everything from boiled eggs and barbecued sparrows to noodle salad – whipped up in a minute, mixed with cashew, chilli and raw onion and served on a banana leaf.

It was utterly enthralling. For the first eight hours. But then the bumps and dusty heat began to wear.

I arrived in Mandalay with the night, a splitting headache and a warm greeting from a new Burmese guide, Yan, who oozed efficiency and had me fed and checked-in to a hotel in no time at all. I woke to a golden dawn, croissants and an air-conditioned car, which whisked us through Mandalay.

We passed the walls of Mindon’s old palace, the U-Bein teak bridge silhouetted against the early sun, and crossed the giant, snaking Irrawaddy. By late morning we reached a low range of hills sitting under a dome of brilliant-blue sky. Yan led me down steps into a narrow gorge and smiled as he saw my jaw drop.

Stretching before us was a terrace of Edwardian townhouses. One was topped with a very English town hall clock. It looked like Windsor. But it was more like Petra – these weren’t buildings at all. They were the painted, carved facades of huge caves.

For two hours Yan led me through the caves of Hpo Win Daung, past facades topped with giant elephants to stone arches and Khmer-style filigree as ornate as a Fabergé ring. And as we walked through the hills we went back in time – from British Burma to the Burma of the great medieval kingdoms, whose life was depicted in astonishingly detailed brilliant-red murals.

I realised I’d been travelling through Burmese history since I arrived – through tribal life and royal mansions, through Japanese and British occupation and into military dictatorship.

Come now, before Myanmar changes, travellers had told me. Before it loses its soul. But Myanmar has always changed. And always stayed the same. For in every one of hundreds of caves I’d seen – behind every changing facade, and in the soul of Burma itself – sat the Buddha. Timeless and serene.

All images by Alex Robinson, unless otherwise credited.