A mini guide to Suva, Fiji

Head to the eastern side of Fiji’s main island to find the archipelago’s capital, with local history, adventure and a sip of kava all within easy reach...

Those wondering why Suva is rarely troubled by visitors should look no further than the Pearl Harbour attack. Despite Suva being Fiji’s capital, most travellers instead touch down 120km away at Nadi International on the opposite, western side of Viti Levu, the country’s largest island, from where they’re quickly whisked away to their beachside resort. In 1941, it was Nadi whose newly laid runway accommodated the Flying Fortress bombers of the USA airforce as they flew sorties against the Japanese, and the infrastructure left over after the war made it the perfect hub for air connections across the South Pacific. Nadi boomed, leaving Suva on the otherside of the island sleepily untroubled by Fiji’s post-war tourism boom.

That’s a (kind of) shame, because Suva is the largest and most cosmopolitan city in the region. It has an easy urban charm that stands in contrast to the hashtagged and palm-fringed beach fantasies portrayed on most Instagram feeds of the Fijian tourism industry.

You can begin learning Suva’s story at a modest whitewashed marker at an intersection downtown, next to where the city’s landmark old ivi (Tahitian nut) tree stood, before it was badly damaged by Cyclone Ana in Feb 2021. Inscriptions on each side offer a timeline of the city’s colonial history, from the arrival of the first missionaries to its establishment as Fiji’s capital in 1882. Fijians can tell you an older story though, of the original village that sat at the mouth of the Rewa River before their land was leased to Australian speculators in 1868 by Cakobau, Fiji’s paramount chief, to help settle his debts to foreign bankers. It was a canny deal for Cakobau (pronounced ‘Thakombau’; the Christian missionaries who first transcribed the island’s language took an idiosyncratic approach to Fijian consonants) but less so for the village’s original inhabitants, who were displaced from their homes as a new European-designed town sprang up in its place. 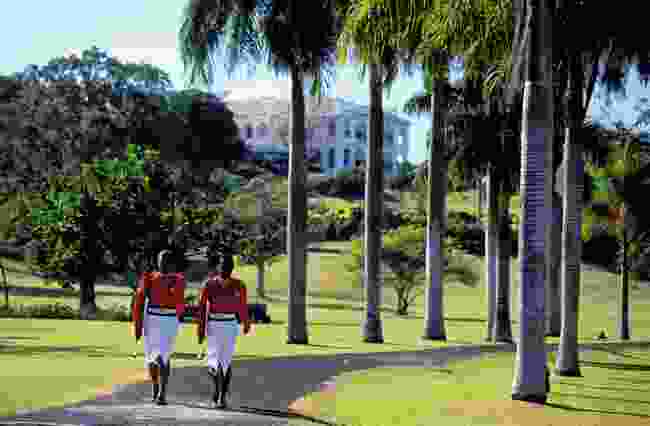 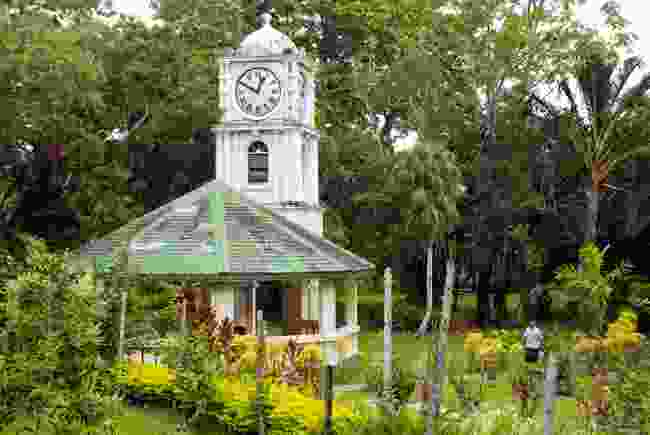 The clock tower in Thurston Gardens, created in 1913 on the site where the original village of Suva was located (Alamy)

That first Suva village was located where Thurston Gardens now stands, a richly planted botanic gardens just south of downtown. Today it’s home to the wonderfully compact Fiji Museum, which recounts the national story from the earliest archaeological remains through to the height of Pacific exploration undertaken by the island’s original inhabitants and on to the arrival of indentured Gujarati labourers in the late 19th century. Their Indo-Fijian descendants now make up a third of the population and are the reason why Hindu temples are almost as common a sight in the country as churches. They also explain the ease it takes to find excellent Indian food in Suva to complement the starch-heavy plates of indigenous iTaukei cuisine.

The cassava, yams and taro that form the backbone of iTaukei cooking are piled high at Suva’s buzzing municipal market, alongside piles of fist-sized pineapples waiting to be squeezed into juice for a Fijian dollar a glass. Perhaps most intriguing to the eyes of visitors will be the bundles of yaqona root, which is grated and soaked in water to create the muddy but mildly stimulating drink kava. Beloved by Fijians, it’s a drink that’s made with as much precision as a Japanese tea ceremony.

Visitors tend to encounter it laid on in kava rituals at their resorts, where it’s taken with much clapping as the coconut-shell drinking-bilo is topped up from a central bowl and passed around. In the city it’s a drink for social occasions with the verandas of Suva houses being popular spots for late-night drinking sessions of ‘grog’ (as kava’s colloquially known), some good conversation and perhaps a few beers laid by too, to take the edge of the kava buzz at the end of the evening. Kava holds an even-more important ceremonial role in the villages beyond the city. Anyone heading to the countryside needs to stop by the market first to buy yaqona in order to give it as the required ritual gift to the village headman.

There’s buzz of a different kind in Suva’s Laucala district, which is home to the University of the South Pacific. A dozen countries across the region jointly operate the university, but Suva is home to the main campus. The university gives Suva much of its international flavour, with students and academics coming here from across the Pacific. Its Oceania Centre for Arts and Culture regularly puts on excellent events showcasing the best in contemporary South Pacific culture.

The best national parks to Visit in Fiji 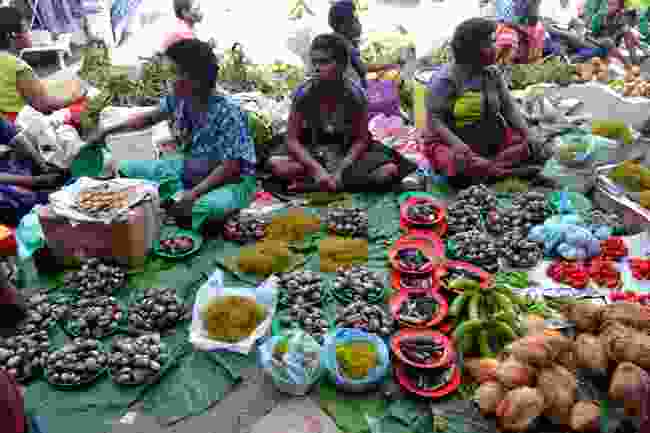 Selling clams, seafood and fruits in the market (Alamy) 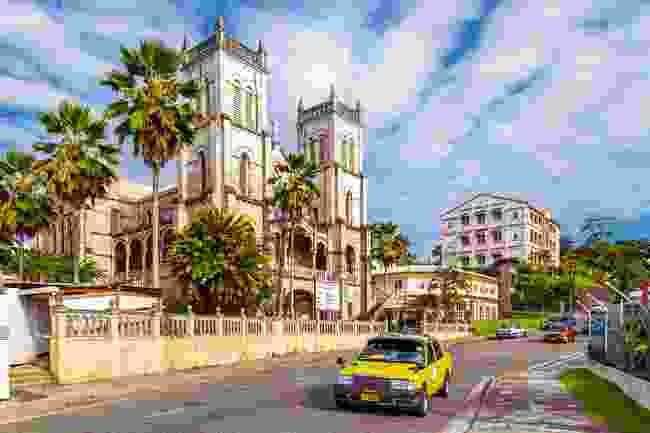 Like much traditional Fijian culture, Suva is modest and unshowy. Its charms are revealed during a stroll along the seawall promenade. The route takes you along parks where kids play impromptu games of rugby and dream of Olympic glory, and families picnic in matching tropical prints picnic at the weekends; past the colonial spectacle of the Grand Pacific Hotel and the Presidential palace, to the warren of streets spinning out from the Tappoo City shopping centre, where sari shops butt up against hole-in-the-wall agencies selling ferry tickets to the outlying islands.

More walks can be found on Suva’s outskirts at Colo-i-Suva, the city’s very own rainforest sanctuary; if you’re feeling even more energetic there’s the climb up Mount Korobaba with its splendid ocean views. The long-running Suva-based Rucksack Club welcomes temporary members eager to use the city as a base to explore the surrounding area.
Suva’s inconvenient location on Viti Levu means that it’s often overlooked by those looking for the postcard Pacific. But with one-in-four Fijians living in its metropolitan area, this compact, characterful capital is the authentic Fiji and more than worth making an island-traversing diversion for. 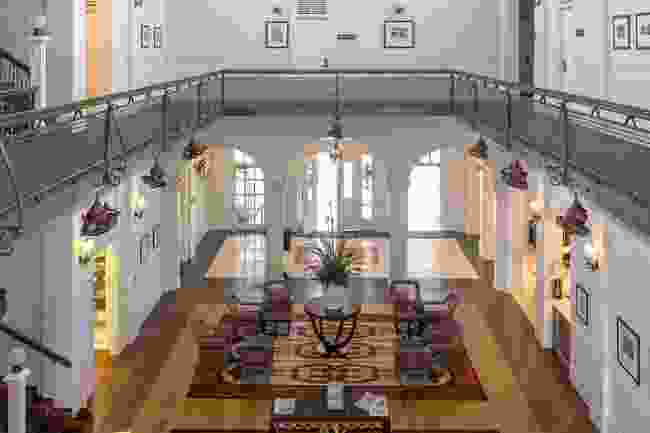 Where to stay in Suva, Fiji

Get away from everything with a lakeside bungalow in this rainforest retreat on the outskirts of Suva. Facilities are basic, but the sounds of nature will serenade you to sleep and wake you gently the next morning for your adventures in Colo-i-Suva.

Rooms decorated with traditional Fijian fabrics add a cheery touch to the popular Tanoa Plaza; along with the great service, these offer a welcoming contrast to the hotel’s business-class bland exterior. Rooms at the front have tremendous views over the city.

The crisp white porticoed facade of this storied hotel was first raised in 1914, and the Grand Pacific has been the height of luxury ever since, looming over Victoria Parade. All rooms come with either a pool or ocean view, and the outside dining is a refined delight for guests and non-guests alike. 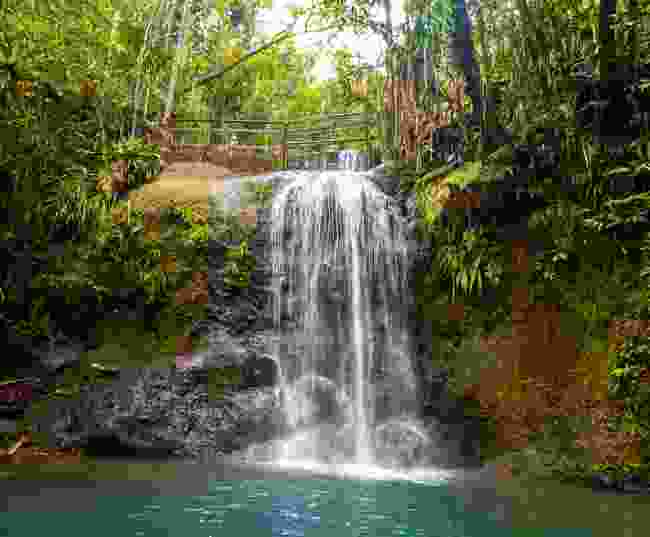 Hiking past a waterfall in Colo-i-Suva (Alamy)

Things to see in Suva, Fiji

An ocean-going double-hulled canoe is the highlight of this national museum, along with the chewed-over remains of a Christian missionary’s shoe from the days of ritual cannibalism. The surrounding Thurston Gardens is the spot for a picnic.

A pocket-sized slice of rainforest on the hilly outskirts of Suva, Colo-i-Suva is braided with lush walking trails and waterfalls leading to swimming holes. Bring a pair of binoculars for the birdwatching.

The best views of Suva and the surrounding city can be found from the peak of Mt Korobaba (427m). It’s a stiff-but-beautiful three-hour return bush hike, though the trail should be avoided after heavy rain.

This lively market is the place to take the city’s temperature, amid earthy piles of vegetables, tropical fruit and cords of yaqona root, which is shredded to turn into the ceremonial drink kava.

A mini guide to Nur-Sultan, Kazakhstan

A mini guide to Asmara, Eritrea

A mini guide to Vigan, Philippines