A mini guide to Nur-Sultan, Kazakhstan

Kazakhstan’s capital has the most dramatic contemporary skyline in Central Asia and challenges every expectation you might have of the Eurasian country, says Sophie Ibbotson

Anyone who visited Tselinograd in 1991, the year Kazakhstan became independent, and then asked a tour operator to take them back again 30 years later, would be in for a shock. They would wonder, not unreasonably, if the city they saw today – now called Nur-Sultan – was even in the same country; or if they had perhaps wandered onto the set of a futuristic sci-fi movie that happened to be being filmed in this remote section of the Eurasian steppe?

There has been a small settlement in this part of north-eastern Kazakhstan since the 1830s. At first, it was called Akmola, meaning ‘white grave’ – probably referring to the burial place of a local holyman. In the mid 20th century, Soviet leader Nikita Khrushchev made it a regional administrative centre for his Virgin Lands campaign, which brought 30 million hectares of previously unfarmed land under cultivation. Akmola became Tselinograd (‘City of the Virgin Lands’) until 1992, when it reverted to its earlier name.

When Kazakhstan became independent, the existing hub Almaty – not Nur-Sultan – was the natural choice for capital city. But Kazakhstan’s new leadership had concerns. Almaty is in the extreme south-east of Kazakhstan, close to the borders with China and Kyrgyzstan. At the same time, the country’s sparsely populated north had little in terms of population or infrastructure. What if Russia decided to encroach on Kazakh territories there? Akmola replaced Almaty as the capital in 1997 and was renamed Astana (‘capital city’) the following year. That name lasted two decades more, when it was once again changed, this time to Nur-Sultan, in honour of Nursultan Nazarbayev, Kazakhstan’s first President and ‘Father of the Nation’.

The exciting thing about building a new capital at Nur-Sultan was that the site was an almost blank canvas. Many of the low-rise Soviet-era apartment blocks and non-descript public buildings could be swept away. Celebrity architect Kisho Kurokawa won first prize in the international competition to design the new capital. Kurokawa, a founder of the post-war Metabolist Movement in Japan, had already created dozens of futuristic buildings around the world, including Kuala Lumpur International Airport in Malaysia and Republic Plaza in Singapore. His global reputation as a ‘starchitect’ and his futuristic vision for the city captured the government’s imagination: this was the man they needed to put Nur-Sultan on the map.

The plan worked beyond their wildest dreams. Kurokawa’s plan caught the attention of numerous other big-name architects, including Norman Foster of Foster + Partners. When designers such as this were onboard, it seemed that neither money nor convention were limiting factors. Foster designed Nur-Sultan’s Palace of Peace and Reconciliation, a dramatic glass pyramid with a £41 million budget; and then, four years later, the Khan Shatyr Entertainment Center, the world’s biggest tent, which covers an area equivalent to 10 football pitches. Italian architect Manfredi Nicoletti, the pioneer of bioclimatic architecture, contributed the design for Nur-Sultan’s Central Concert Hall while Danish firm Bjarke Ingels Group won a competition to design the National Library.

One of the latest additions to that eclectic skyline is Adrian Smith and Gordon Gill’s Nur Alem, the glass sphere centrepiece of the Kazakhstan Pavilion at EXPO 2017. Any architecture enthusiasts could spend weeks grid-walking Nur-Sultan’s streets, and with new structures continually rising storey-by-storey from the ground, there will always be something new and aesthetically unexpected to see. 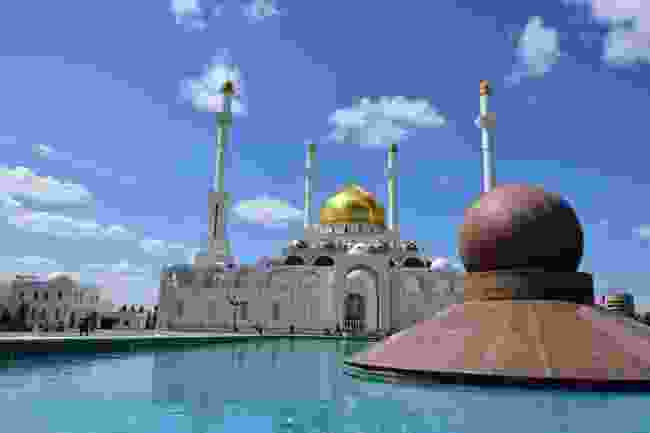 Aside from its impressive architecture, Nur-Sultan’s other claim to fame is that it has one of the most extreme climates in the world. Only Mongolia’s Ulaanbaatar is colder in winter, but summer temperatures can reach beyond 30°C. This influences when you will want to travel (avoid December to March) and may mean you spend more time indoors, or sightseeing from a bus, than in some other destinations. When the weather is fine, however, it’s a great joy to be outdoors, joining Nur-Sultan’s residents on the wide boulevards, plazas, and parks.

The pedestrianised Nurjol Boulevard is on the left bank of the Ishim River. It is a key part of Kurokawa’s city plan, and runs between the Ak Orda (the President’s official residence) and the Khan Shatyr, with the Baiterek Tower and other notable monuments en route. The fountains dance, often in time to music, and, in the evenings, are choreographed with coloured lights. The fabulous flower displays, which change with every season, make you forget that this part of Kazakhstan is naturally arid steppe.

If you are searching for signs of traditional Kazakh culture, which does at first may seem lacking in Nur-Sultan, you need the Zhailau Ethnoaul. This ethno-cultural complex was built during EXPO 2017 but is now a permanent attraction, popular with locals as well as foreign visitors. Unlike in other parts of Central Asia, Kazakhstan’s nomadic population has been settled and urbanised for the past century. At Zhailau, however, there’s a family-friendly opportunity to see inside a Kazakh yurt, watch horse sports, meet artisans and admire the national costumes you are unlikely to see elsewhere.

Yes, there is a touch of Disney-fication at Zhailau Ethnoaul and across Nur-Sultan. Nothing really is natural, and it’s not necessarily what it seems. And yet, this is entirely fitting in a city where almost everything has been created in the past three decades to present a modern vision of Kazakhstan. After exploring those remarkable streets, visitors can only wonder what you would discover there in another 30 years.

4 top things to do in Nur-Sultan 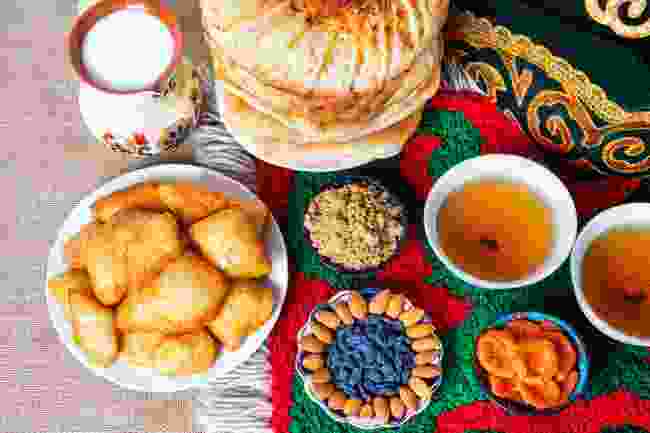 Eat… authentic Kazakh cuisine at Alasha, a restaurant modelled on what seems to be a Bukharan palace and an oriental bazaar. It’s atmospheric, and the food is some of the best in Nur-Sultan.

Climb… to the top of the Baiterek Tower for panoramic views across Nur-Sultan. The design of this monument was inspired by a Kazakh folk tale of a mythical bird of happiness which laid its golden egg in the tree of life.

Discover… the country’s history and culture at the award-winning National Museum of Kazakhstan. The museum’s showstopper is the Golden Hall, which displays Bronze Age ornaments discovered among the ‘Golden Man’ treasure horde.

Relax… on the beach! Kazakhstan may be land-locked, but the Sky Beach Club within the Khan Shatyr recreates a marine environment. The sand is real, as are the palm trees, and there is even a wave machine in the pool.

Where to stay in Nur-Sultan... 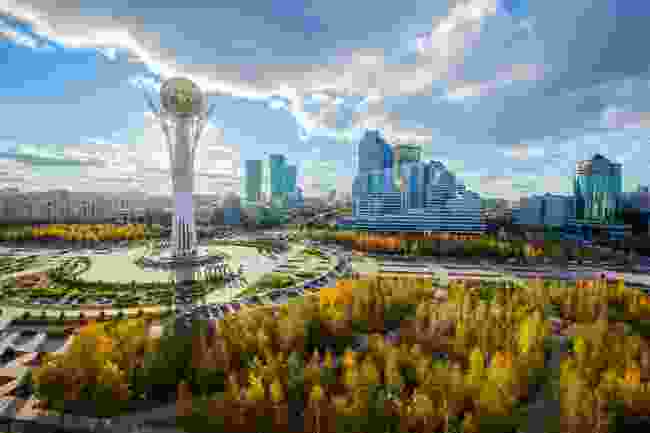 Affordable: Nochleg is a well-designed, well-run and – most importantly – clean and safe hostel option for budget travellers. It’s within easy walking distance of the Baiterek Tower and the State Theatre of Opera and Ballet, right opposite Jetisu Park and the Ishim River.

Mid-range: Centrally located and wonderfully kitsch, Vintage Boutique Hotel is a super choice for those wanting elegant interiors and good facilities without breaking the bank. The Japanese sauna is ideal if you are planning to visit Nur-Sultan in winter.

Top end: The Ritz-Carlton, Astana Nur-Sultan’s most exclusive hotel sits in Talan Towers in the city’s business district. Strikingly designed and with some of the best views in the city, the hotel carefully incorporates aspects of Kazakh culture, such as a tea ceremony at zen, with top standards of service.

Quiz: How well do you know the Central Asia ‘stans?

Quiz: How well do you know the world's strangest flags?