It sometimes feels like there are few islands left in Thailand that haven’t been turned into tourist hotspots. Koh Phayam is still one of them, but development is fast bringing it into line with its more famous rivals. There are still no cars, no post and no hotel blocks. Hot water is a luxury and air conditioning is available in only one bungalow resort.

Sitting off the northwest coast of Thailand, on the border with Myanmar (or Burma, I’m confused about which is the correct term these days), Koh Phayam has long been a secret refuge for yachties tired of the commercialism found in places like Phuket, Phang Nga Bay and half moon party magnets like Koh Phangan and Koh Samui. 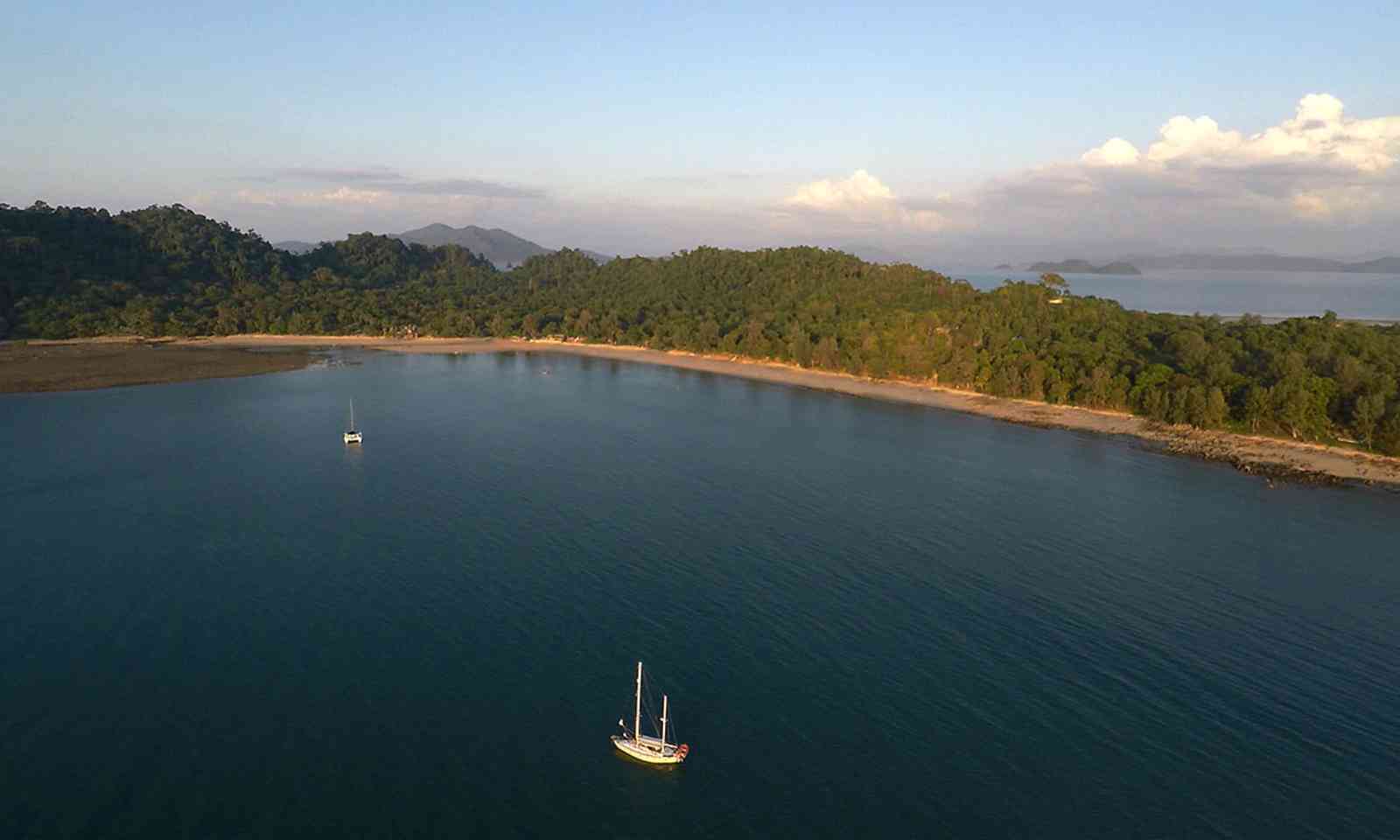 More intrepid holiday-makers have also been beating a path here in the last few years. A fast ferry from Ranong gets you to ‘The Pier’, a basic concrete jetty that emerges from a tiny village over mud flats and mangroves.

Most visitors then hire scooters or take taxi-bikes to Long Beach, where the majority of bungalow resorts can be found. For yachties, Buffalo Bay provides better shelter from the Andaman Sea swell, and it's a safe place to drop the hook in late December until late March. We had to get there first.

As we rounded Phuket’s southern point SY Esper was pounded by three to four metre waves in confused seas. By now, the northeast monsoon should have set in, but this year’s unpredictable seasons meant the wind refused to play ball and was coming straight at us.

After taking a battering from the relentless waves for most of the day, we gave up and pulled into Patong Bay looking for enough shelter to allow for some sleep. The waves flattened out, but the swell meant a night of rocking with objects, people and a disgruntled cat being flung from side to side. We got up before dawn and left.

With no chance of a sail, we gunned the engine and headed northwards for 10 hours to the river estuary of Ban Thap Lamu.

After the turbulence of the past couple of days, arriving at dusk to calm waters was a relief. Ban Thap Banu is home to one of Thailand’s naval bases, so it is perfectly appointed for weary sailors to recharge and re-provision with food, fuel and water. 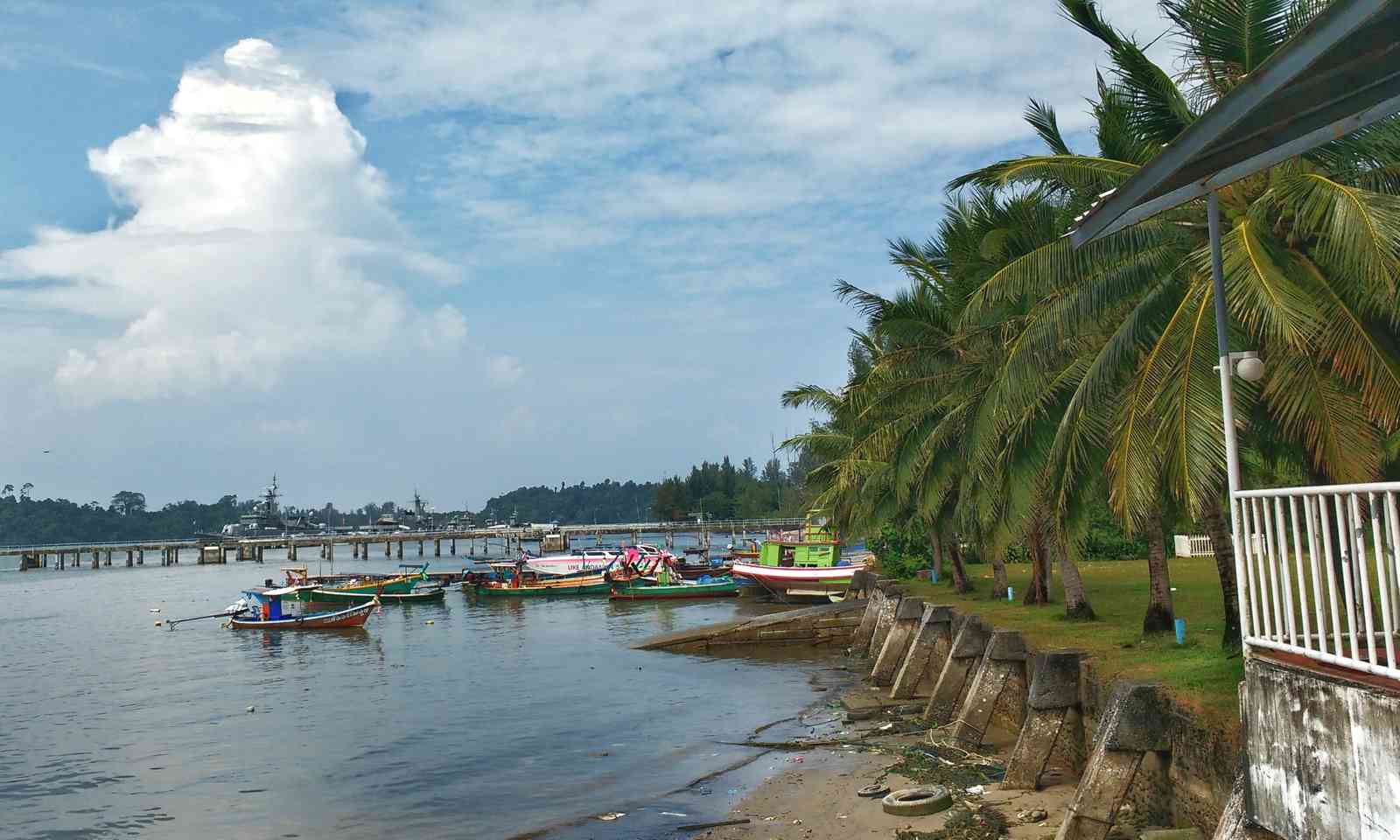 The view from the Navy Wives Club (Jamie Furlong)

We made the most of our two days there, catching up on sleep and going to the Navy Wives Club (where the food is local, substantial and cheap) for lunch and dinner. Apart from grey naval vessels, the estuary is home to abandoned fishing boats, old yachts, long-tails and slaloming motor cruisers full of tourists off to the Similan islands.

With two stops still to go before reaching Koh Phayam, we left for our next haven in rolling seas and wind on the nose. Thankfully, our new engine was proving strong and reliable and was passing its extended sea trial with flying colours.

Ko Phra Thong, taking its first footsteps into gentle eco-tourism, is one of several islands in an estuary off the coast of Khao Sok national park, where you can find a couple of tiny resorts and camping grounds on shore.

For the most part, the estuary is fringed with pristine mangroves rising to uninterrupted rainforest. The whole area is wild countryside on the verge of being discovered by the tourism industry, and I urge anyone looking for peace in a remote and naturally beautiful area to go there now. We stayed for one night and it wasn’t long enough. 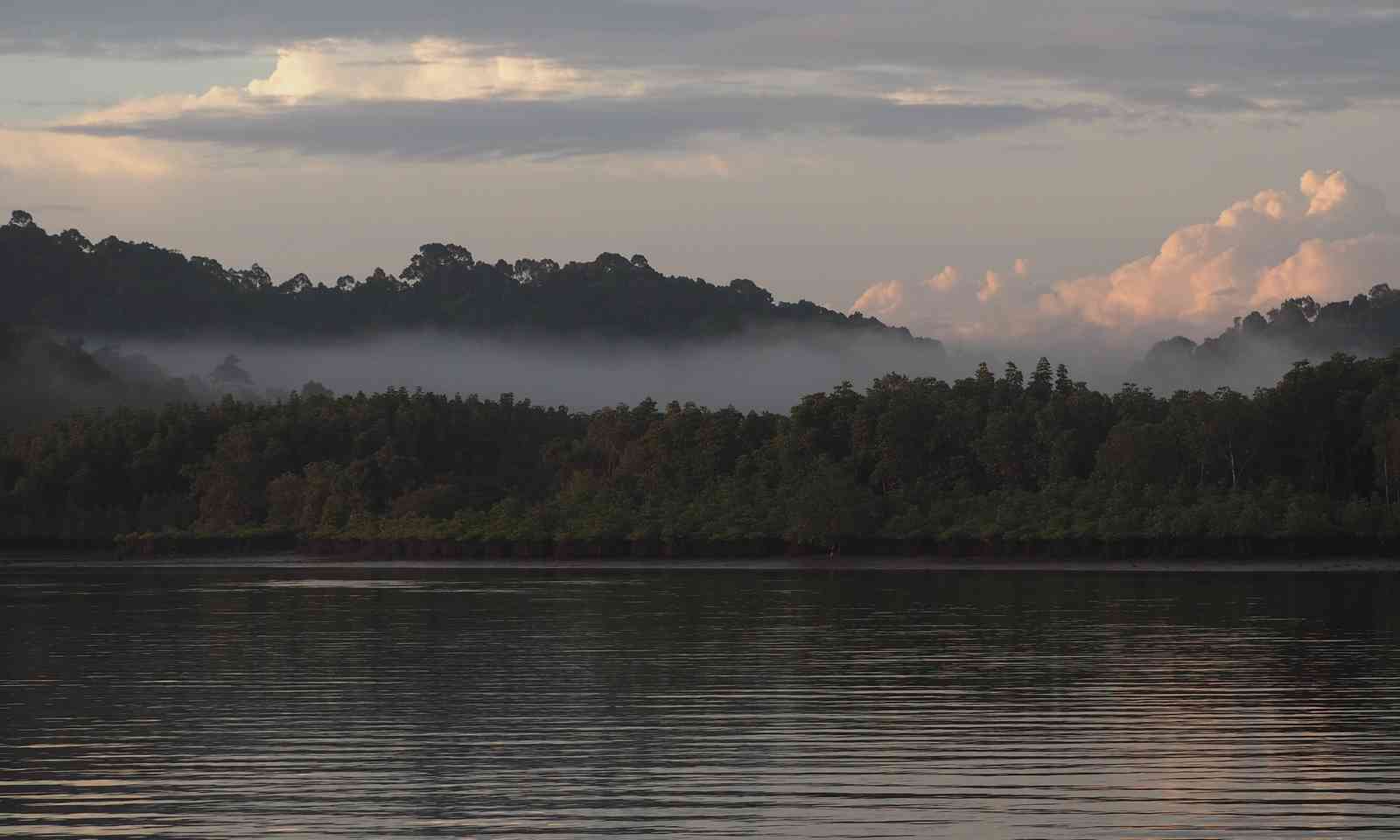 Closer now to Myanmar than Phuket, SY Esper made her final stop at the Laem Son group of islands before a short crossing to Koh Phayam.

Untouched by human occupation, this island group is home to monkeys, eagles, swiftlets and every-shade-of-green jungle.  The only visitors are longtail fishing boats and yachts sheltering from the Andaman swell, but the islands’ white tidal beaches are sure to attract visitors by speedboat in the near future. 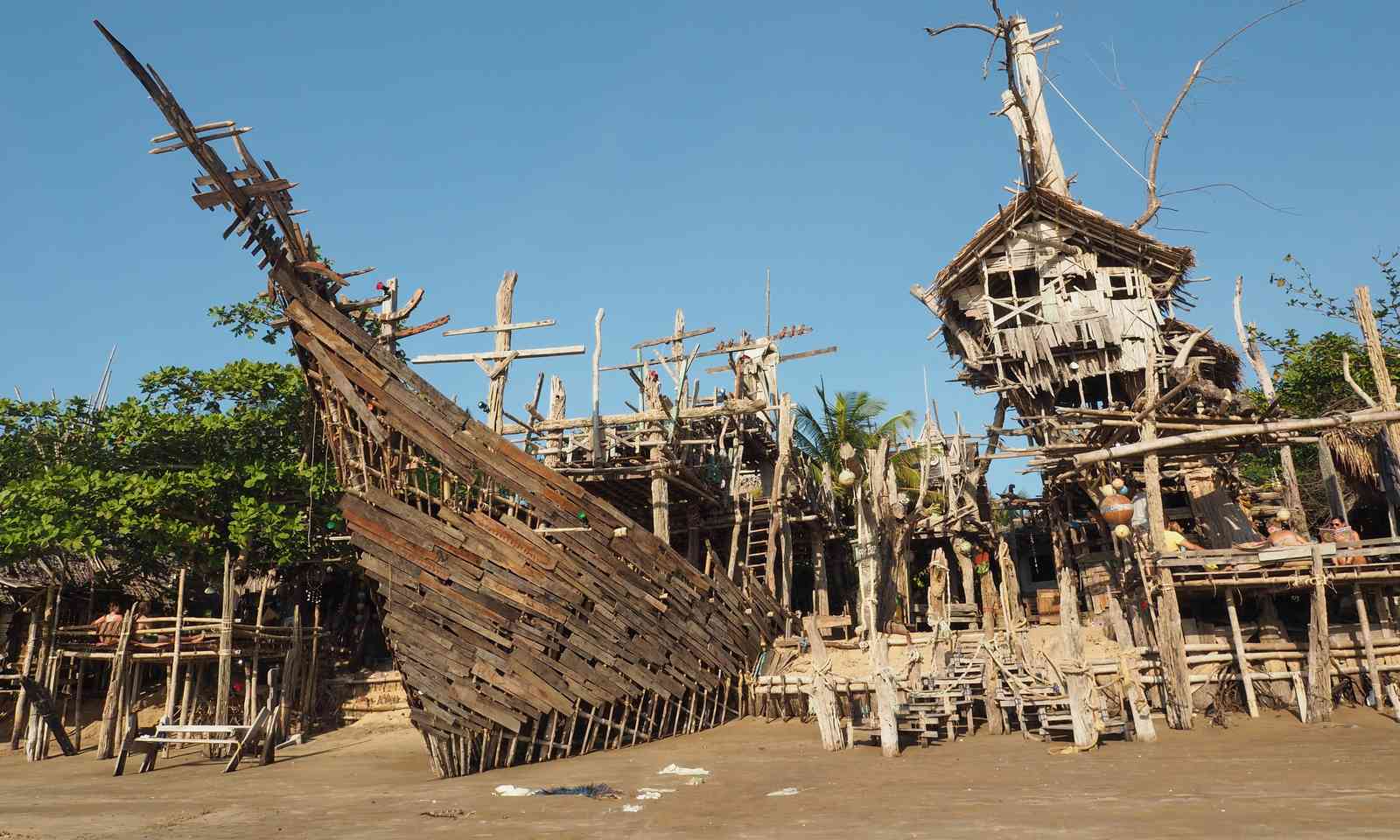 We arrived at Buffalo Bay in time to welcome 2017 at the Hippy Bar on the beach’s northernmost point.

Built entirely from driftwood and other found objects, the bar/restaurant has been a work-in-progress for its owner Jimmy over the last decade. A ghost ship prow hangs above the sea at high water and a higgledy-piggledy arrangement of ramshackle towers dot the area behind it, some extending to three levels. Small sea and forest treasures, along with patterned textiles, hang from gnarled timber, and someone has added subtle carvings to a few of the larger sea-weathered logs.

During the day, it is an irresistible climbing paradise for children, with parents hovering close by as the kids swerve to avoid exposed nails and eye-level planks. There are small wooden bars serving Thai and western food or fruit shakes and beer. In the evening, adults gather in candle-lit nooks to sample the best Caipirinhas on the island and listen to Jimmy’s smooth vibes or the occasional live music. 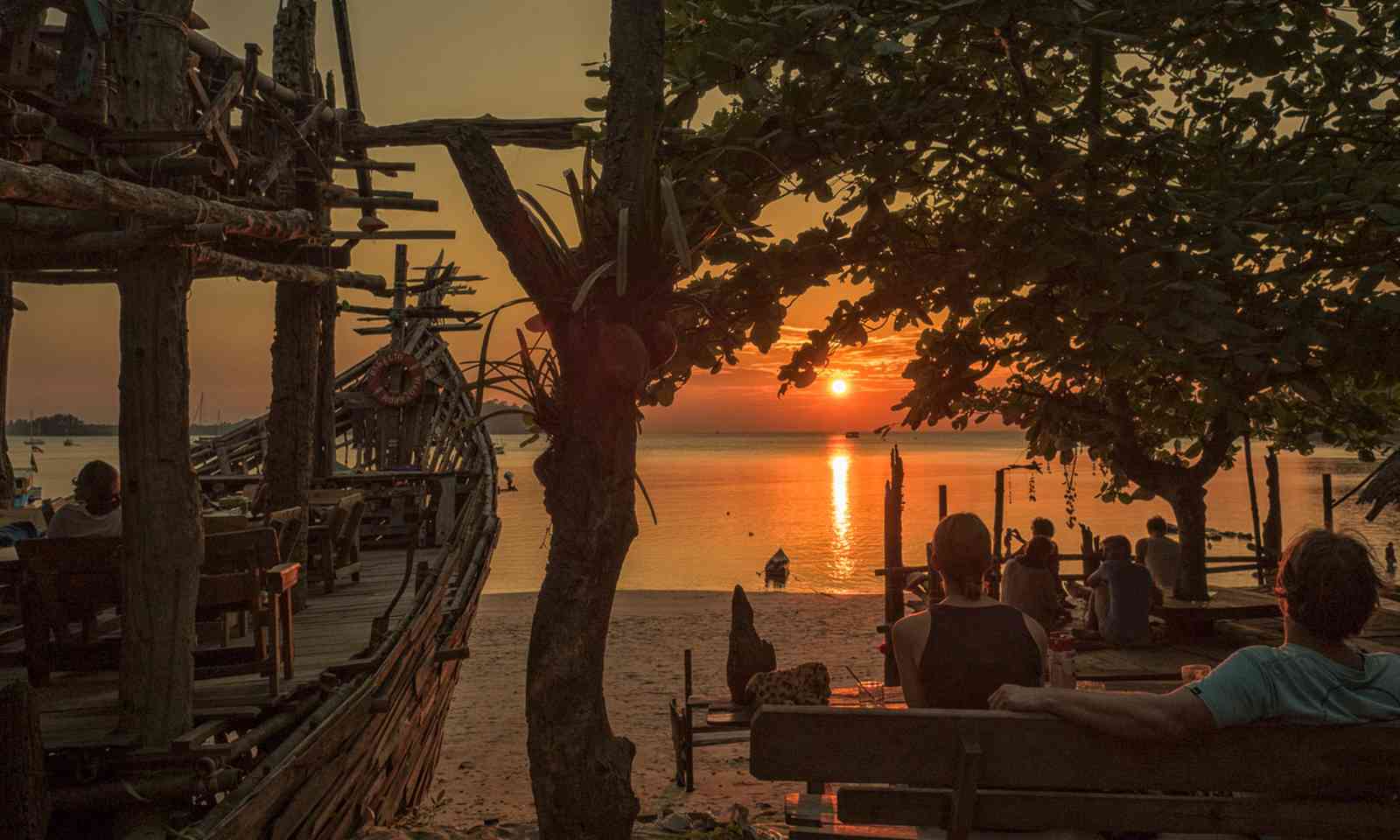 A few years after the tsunami of 2004, when building and planning regulations were tightened up in vulnerable areas, inspectors were eventually sent to the beaches of Koh Phayam. Bars and restaurants were closed or relocated to higher ground, and it looked for a while like The Hippy Bar would be shut down.

But, to everyone’s relief, the government decided Jimmy’s hard work was intrinsic to the island’s success as a tourist destination and allowed it to remain as a designated icon.

Putting the previous week of thrashing waves and tranquil anchorages behind us, we settled in for a New Year’s holiday.