Salt of the earth: Meet the local people and projects of Mauritius

A new hotel in Mauritius is encouraging visitors to get out of their rooms and spend time with local artisans, fisherfolk and farmers, discovering a side to the honeymoon paradise that few witness… The night was dark and I was faced with a tough choice: ginger, passion fruit, vanilla, rosemary, lemon, banana, cinnamon or coffee.

“Or one of each,” winked Mirella Armance, playfully bumping her hips against mine as she walked me along the line of her crystal-decanted homemade rums. “The only fruit you can’t use is pineapples,” she said, pouring a sailor’s-size measure into my glass and ushering me into her dining room. 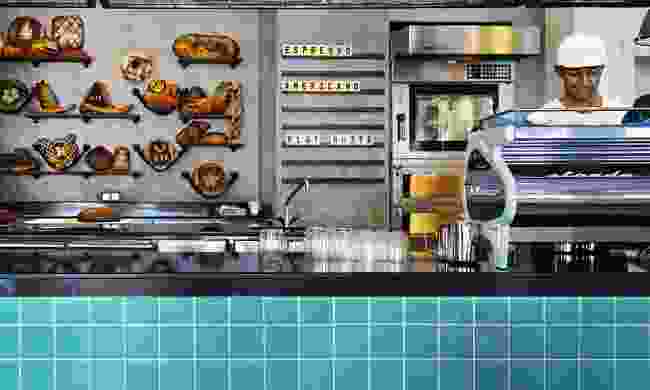 Twice a week, she and her eight daughters serve up a home-cooked meal for travellers hungering for the real Mauritius. We each picked a mismatching chair and, in a mixture of French, English and Creole, talked of fruits, mouche jaune (the ‘milky’ wasp larvae locals love to pan fry with onion and garlic) and family.

Grandchildren snuck out of their beds and came to sit on their mothers’ knees, or scrambled after a gecko on the wall. It may have been the chilli, or almost certainly the free-flowing rum, but contentment settled over the room like a warm blanket.

She’s not wrong. This Indian Ocean island is a prototype paradise of palm trees and translucent waves lapping shores white as spilt sugar.

It’s a place where communities bear mottos such as ‘Village of Sincerity,’ ‘Village of Peace’ and ‘Village of Politeness’; where more than 55 varieties of mango grow; and where the flightless dodo once ambled, convincing foreign sailors they were drunk and seeing things, until these birds were nibbled into extinction by rats carried by the Dutch ships.

However, until recently, travellers looking for ways to break out of their hotel cocoons and spend time with Mauritians struggled.

Now a progressive new stay is changing all that. SALT of Palmar opened late last year on the wilder eastern edge of Mauritius, away from the touristy north and west, and I was eager to see how it could open up a side to the island far removed from its blissed-out honeymooners.

A stay to remember 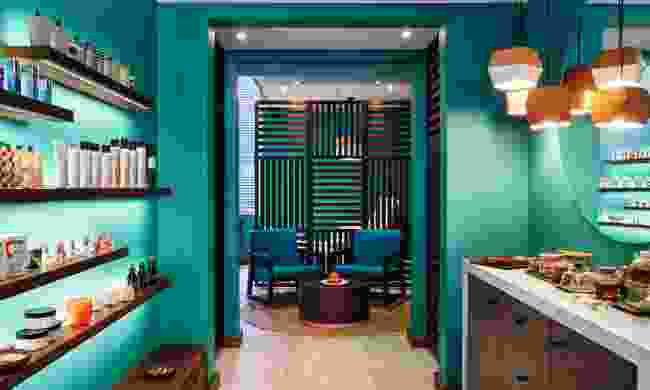 The hotel's spa (SALT of Palmar)

The idea took some faith. An old Moroccan-style family hotel was reimagined with riotous décor by French artist Camille Walala, and an eco approach was adopted, including a ban on single-use plastic (there are water-refill stations around the property and ceramic pots for shampoo and sunscreen in bathrooms).

Food is sourced from a local bio-farm (there’s no imported meat) and, to eliminate waste, there’s no buffet. Even the bathrobes are made from recycled coffee beans. But it’s what you do when you leave your room that makes all the different.

“Other hotels offer standard excursions to the wildlife park, or a catamaran cruise. Our day trips are about meeting the local people,” said Tony, a six-foot-plus wall of muscle with a white smile, who is also the on-site fitness instructor. 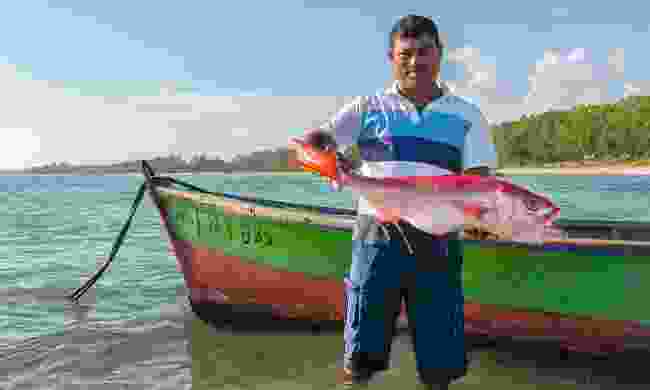 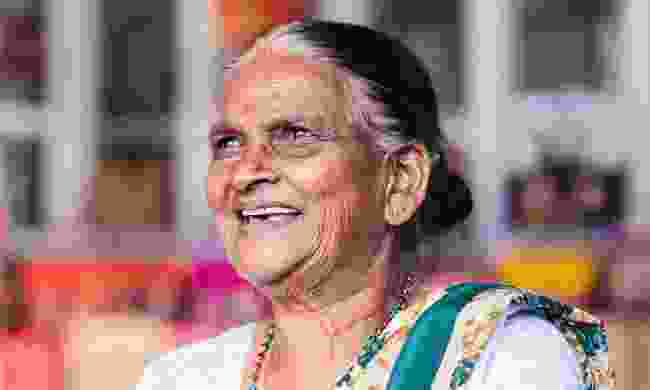 They do this via a network of ‘Saltshakers’ – a team of local suppliers and artisans that guests can meet via the Skill Swap platform: from fishing with Kishor Juggoo and soap-making with Nathalie Marot, to pottery with Janine Espitalier-Noel and basket weaving with Reotee Buleeram. We found Mrs Buleeram in the village of Brisée Verdière. Her raven hair and keen eyes didn’t betray her 74 years. One of eleven children, she started life cutting sugar cane in the fields.

“The sirdars (French supervisors) were not kind – always shouting,” she said, leading us through the jungle of vacoa (screwpine) planted in her back garden. “We woke at 4am to crop before the sun got too strong, and we earned 50 cents a day,” she said of her days on the sugar plantation.

She uses the vacoa for her homemade baskets, and we watched on as she handled the razor-sharp leaves effortlessly. “Only strangers get scratched,” she smiled, “the palms know me.”

“After the plantation, I carried wood on my head and milked cows,” she said, moving to the front of her house and seating herself on a low stool outside her temple room. “And then the baskets – I’ve been making two a day for 40 years now. My sons want me to stop, but I love it.” She picked up a leaf and smoothed it flat with a large blade. “They weren’t interested in learning, but that’s OK because one’s now a manager of a casino and another is a lawyer – all by my work.”

Proof of her hard graft stood in the driveway behind her: a shiny red car. “I’m so proud of them, but I can’t read or write, so I ask neighbours to recite and reply to the letters they sent.”

We asked to buy a few of her baskets, so she stood and arranged her cotton sari with quiet dignity, then gently gathered some together. 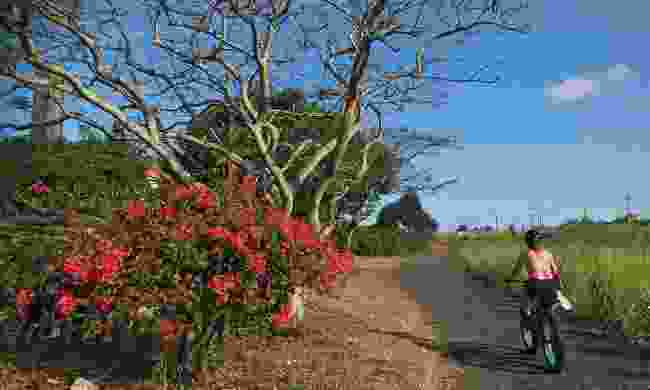 A cycle tour of the lesser-seen east coast (Emma Thomson)

To get to know the community even better, Tony, the fitness instructor, took us out on an e-bike ride along the old coastal road to the village of Belle Mare. On the outskirts was an old sugar mill, its tall stone chimneys standing sentinel-like, forgotten obelisks. The only tenant was a scarlet Madagascan fody that trilled loudly as we approached.

Sugar cane was first brought from Java by the Dutch and was used initially for the production of arrack (rum). It was only under French rule that the financial potential of the sugar crops was realised, and at the height of production in the 1850s, there were 259 mills on Mauritius. 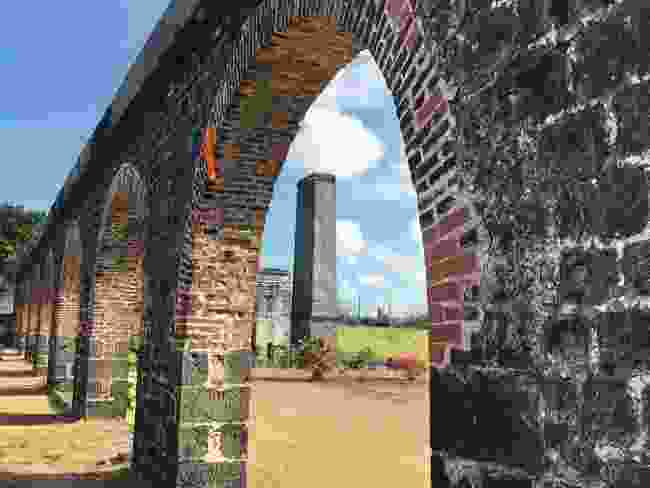 We turned around and headed south towards Trou d’Eau Douce, passing an open-air Hindu cremation site, chickens grazing on the roadside. To our left, the gnarled roots of mangroves dipped into the tin-foil sea like old men cooling their legs.

We halted beside Beline Barachois, a pond layered with lily pads. “I used to swim with the fish here while my Mum did the washing,” said Tony, leading me to the other side of the bridge where a woman was pounding clothes on a rock below while her young son splashed nearby.

Further along, Tony dismounted next to a roadside cart. “Victoria pineapple?” he suggested. I followed him over, asked for two and watched the vendor sprinkle chilli flakes and sea salt over the top of the juicy chunks.

“Just the way we like it,” said Tony. The heat of the flakes cindered my mouth until we pulled up outside a concrete house with two dogs sheltering beneath the bushes. “Come and meet my mum and sister,” he said, dipping into the doorway.

They were watching TV and were surprised to see us. “I just wanted to show them my medals and trophies,” he called over his shoulder while pointing to the dresser laden with glinting brass.

“He’s a national champion in Thai kickboxing,” his mother beamed proudly, as he gave her a peck on the cheek and ushered us out into the sunlight. A dish of cold-cut octopus (SALT of Palmar)

Fired up by the chilli, I later joined a food tour of the southern town of Mahébourg. The area was discovered accidentally by the Dutch in 1598 when their ship was blown off course by a cyclone; today it’s still most famous for the Battle of Grand Port between the British and French navies in 1810.

“British ships snuck into the bay using a French flag, but the French later lured them to shallow reefs and sank the fleet,” explained my guide, David (‘The Useful’) L’Utile. “Napoleon was so proud that it’s the only naval battle listed on the Arc de Triomphe – but I’m not a historian, I’m a foodie,” he enthused, rubbing his belly. We entered a simple café where David started us off with gateaux piment, or chilli cakes – a Creole recipe of split peas mixed with tomatoes, onions and cornflour, rolled into balls and deep fried.

I followed his lead and drizzled some of the accompanying salsa on top. A fiery flash of heat ripped across my tongue, causing me to cough and tears to brim in my eyes.

David grinned: “The only place with hotter chillies is Mexico,” he said, proudly. “I’ll eat chillies until my hair starts to itch – I used to drink Tabasco when I was a teenager!”

We walked a few blocks more, the south-east trade winds raking my hair. David plonked a bowl of mine bouillie (boiled noodles with shellfish, cloves, star anise, cinnamon and pepper) in front of me. Next came a mangouak (shellfish) salad, then a merveille – fried poppadum topped with tamarind sauce.

“So far, so fat?” laughed David. I tottered after him as he led the way, imparting tidbits of local wisdom as we went. “You know Creole is just an abbreviation of ‘créé aux Îles’ (‘created in the islands’),” he told me. The slaves were all drawn from many different parts of Africa and needed a common tongue in which to communicate.

“I’ve got friends in Haiti, Mozambique and Tahiti, and they all understand our Creole.” Sandwiched between private homes, we waited by the river while a Delta motorbike puttered down the lane. “Meet Mr Pandeet,” waved David. “For 30 years he’s made the best glaçons rapés (slushies) on the island. Every Tuesday, he makes his own juices; others use syrup, but his are just fresh fruit and sugar.”

Mr Pandeet stepped off and magicked an ice block from near the engine and started crushing it beneath a hand press mounted on the back of his bike. “Coconut, almond or tamarind flavour?” he motioned, pointing at the bright bottles. 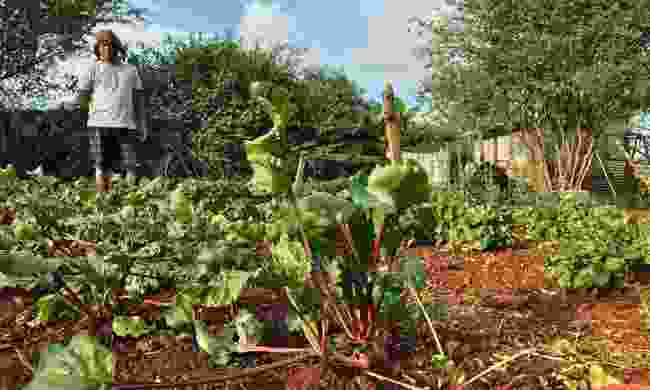 Food, it seems, changes lives on Mauritius. “I was young when my mum died from cancer,” explained the co-founder of NGO Island Bio, Olivier Fanfan, “and I vowed then and there that everyone – even the poor – should have access to healthy food.”

One of Island Bio’s projects is an organic community garden in Baie du Tombeau, which supplies SALT hotel with their vegetables. “The farm acts as an open-air supermarket for the neighbours,” Oliver added, as we strolled between rows of lettuce, beetroots and peas tagged with flickering videotape to deter the birds. 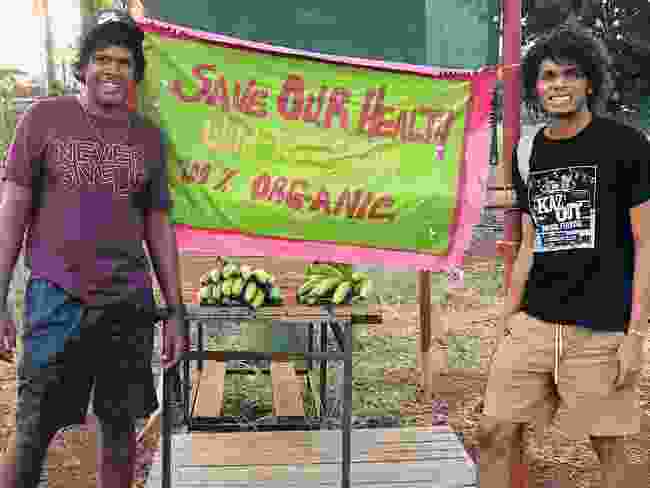 But the project is as much about offering second chances. “This is a tough neighbourhood. Many young guys were drug addicts or ex-offenders unable to find work. We had to do something, so we now provide them with training in agro-culture and a chance to be part of the community again.”

He took us to see the goats and beehives, passing blooming moringa trees and banana palms, their new leaves rolled tight as cigarillos. “Plus, we give gardening lessons to kids who want to learn more,” chipped in his co-worker, Kevin Madre, who wore a T-shirt emblazoned with the slogan ‘NEVER GIVE UP’. “Most hotels assume visitors only want to go to the beach, but maybe they want to meet locals and learn about our projects?” he finished, tracing the toe of his shoe through the red dirt. 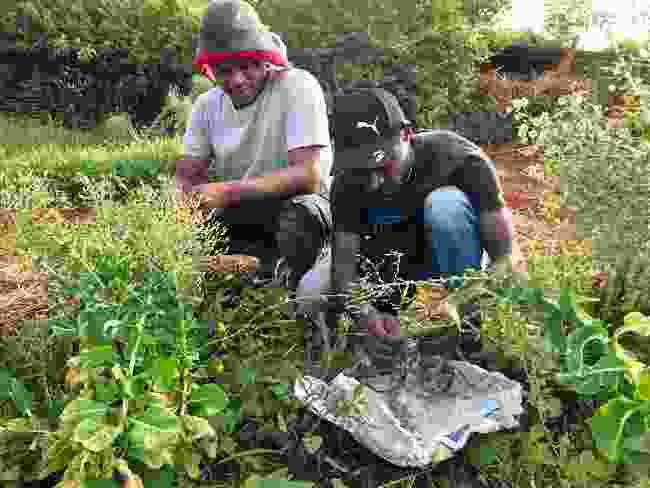 Kevin was right. Their work reminded me of something Mirella’s eldest daughter had taught me at dinner on that first rum-laced night. It was a Creole saying that translates as ‘one match breaks easy, but you can’t break a box’. In other words, together we’re strong. The sight of the island’s sands would have washed from my memory over time, but supporting Mauritian families, initiatives and artisans had – like the chillies – left a lingering glow. 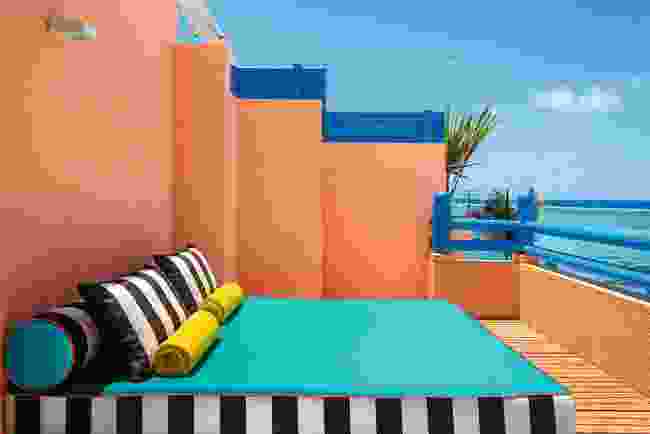 Here's 5 reasons you should go

How to make a Mauritian coconut pie

Check out our full guide before heading to Mauritius