Repairing the damage in Thailand

When Liz Cleere's boat got damaged in Thailand she was told she'd never receive reparations. This is how she proved them wrong

The day after the collision Jamie went to the police station to make an official report of the accident. We had shared our experience on social media and were advised by travellers and sailors near and far that we may as well write it off, just put it down to experience, be thankful it hadn't been worse.

“No falang ever receives justice in Thailand,” someone said.

These kinds of bigoted remarks get bandied about, but we had found only reason and kindness during our stay so far. We decided to trust Jia, our Thai friend, who urged us to make an official report of what had happened. With no working dinghy Jamie grabbed a lift ashore from American and set off to the police station with Alicia as back up, leaving American and me behind to keep watch over the boats. Everyone felt a little twitchy, even vulnerable, and we didn't want to leave our homes unattended.

The anchorage is in a small cove on the northern shores of the island, so the only way to get to the main part of town and the police station, is by longtail boat. What started off as an obligatory trip turned into an opportunity for a bit of sight-seeing. Longtail boats have narrow drafts which can take them close to shore, through shallow pools and rocky patches; they reach the kinds of places we have no chance of seeing in SY Esper.

The trip took them past hills of tropical rain forests and limestone karsts, through coral-fringed narrow passages into blue-green lagoons. For all its tourism, Phi Phi Don still has unspoilt and spectacular places to visit. It's the kind of destination which suits all tastes, from bar-hopping hedonists to beach-time families to nature and wildlife lovers. 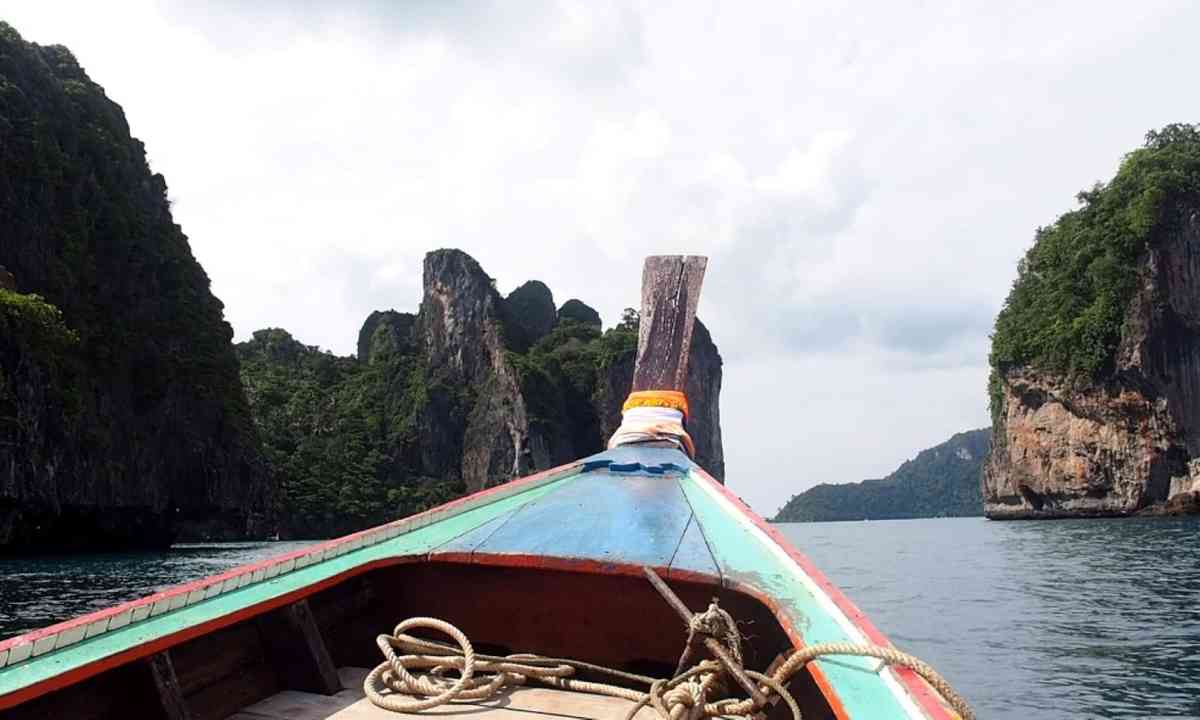 Jamie made his report to a bored-looking policeman who chain-smoked throughout. He looked at Jamie's photos of the incident and wrote some notes, then thanked Jamie for letting him know about it. That was that.

After grabbing the opportunity for a little shopping in town – food and wifi top-up for Jamie, jewellery and clothes for Alicia – they came back to our anchorage in another spectacular longtail ride, this time viewing all the same natural splendours from the opposite angle.

While they were having a lovely time recording and photographing the trip, I received a call from the police asking Jamie to return the next morning. Alarm bells rang. Did we have the right papers for the boat? Was his passport in order? Was everything about us legal? Were we in trouble? What was it all about?

There was nothing we could do about it now, so we put our worries behind us, and spent the afternoon planning our passage south to the boat yard. In the evening, our new wonderful friends, American and Alicia, fetched us ashore for a stroll along the warm, soft sand and a candle-lit dinner.

Although SY Esper was suffering from some unpleasant injuries after her bump, we were in a place some might call paradise, and it would be churlish not to appreciate the beauty surrounding us.

The following day, Jamie and Alicia were up early to get to the police station again. We all hoped it would not take too long because the previous night we had agreed that if business was completed quickly, we would sail both yachts south to Ko Ha (Five Islands), five scraggy rocks surrounded by coral, accessible only by boat.

At the police station, Jamie was introduced to the skipper of the barge that hit us.  He spoke no English and Jamie spoke no Thai. In fact, no-one spoke anyone else's language well, so a translator was summoned. By the time Jamie was on his fifth coffee and the police chief on his twentieth cigarette, 'Wat' the translator arrived.

A joke he'd used many times before, but in the tense atmosphere of the room it fell a little flat.

Straight away, Jamie learned that the skipper had admitted that the collision was his fault, and that he had caused the accident. He explained that the gearbox was faulty and that it was sometimes impossible to engage reverse. He shouldn’t have been so close to us with a faulty gearbox (or even with a good gearbox) but Jamie was delighted by the man's obvious honesty.

Not wanting to lay all the fault at this sad man's feet, Jamie and the police suggested the owner of the boat admit liability. The skipper made the call, but the man would have nothing of it, insisting his skipper make reparations. The police said there was nothing they could do and talked of taking the skipper to the courts, throwing him in jail and charging him for damages. This was not what we had been expecting.

Despite knowing the skipper was going to cost us around £5,000 in repairs, Jamie felt sorry for the poor man. Wat explained that if an agreement could be made for repairs between them right now, it would avoid time, trouble and money in the courts.

Jamie knew that neither of us wanted anyone put behind bars, so he plucked a rough figure out of the air, halved it, agreed a six month payment scheme, and the contract was drawn up, signed and witnessed at the police station. To Jamie's astonishment, the senior police officer then pulled out his wallet and lent the first instalment to the skipper. There were smiles and bows all round, and Jamie walked away with cash in hand.

The only question now was would we be able to make it to Ko Ha before nightfall.

We never expected to see the rest of the money, and didn't mind because we were overjoyed by the way we had been treated by all parties. But next month the second instalment showed up in Jia's bank account (as a Thai he was able to collect the money on our behalf).

By then we were conscious of the heavy debt the man was carrying, so we halved his repayments and when Jamie returned to Phi Phi a few weeks later, waived the remainder.