The perfect Thai island that you’ve probably never heard of

Liz Cleere and Jamie Furlong explore the culture, food and hidden corners off the little known Thai island of Koh Phayam, and ask: “Is this the best island in the world?”

Koh Phayam, a tiny island off Thailand’s Andaman coast, has long been a favourite with intrepid yachties. As we secured our anchorage at the Sun Resort on Buffalo Bay, we quickly discovered why.

Within minutes, the mostly Burmese staff knew our names and were well on the way to becoming friends for life. It immediately felt like one big happy family, presided over by an elderly Thai husband and wife, who showered smiles and charm on staff and customers alike.

The food wasn’t great, but with all the goodwill and helpfulness, we were happy to put up with the thin, tasteless curries carefully placed in front of us. 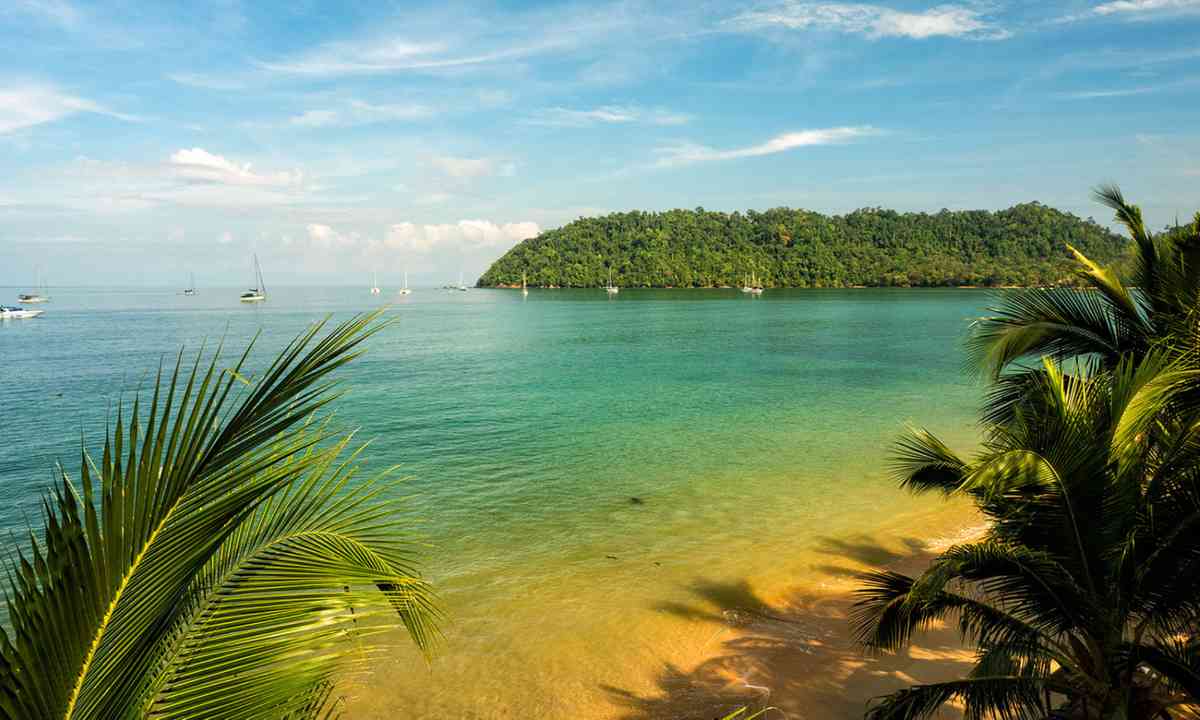 Thankfully, there are many locally-run restaurants near and far on Phayam, on the beach, tucked away in the rainforest, on top of hills, overlooking the mangroves or down dusty lanes. Each visitor finds their favourite. For us, it is Cha-Chai Home.

After becoming stranded on the island six years ago because of a cock-up with her credit cards, Charmain from England fell in love with Chai from Phayam and never really left. Now married and with a son, the couple built this refuge-from-the-daily grind themselves.

Although its enormous two book menu is aimed at vegetarians and vegans, you are just as likely to bump into red-blooded meat eaters wolfing down succulent veggie burgers trimmed with foraged leaves, home-made cashew cheese and tulsi pesto.

The flavours are so intense, the offerings so wide, and the atmosphere so laidback, it is easy to spend the day there on a bed of cushions on a raised bamboo platform, underneath a coloured awning, as you work your way through local-grown fruit lassis laced with every kind of superfood. All the food is prepared in-house and the ingredients are fresh and sourced locally.

The island is only 10km long and 5km wide, so we didn’t take long to cover every road and most of the trails on the island. On one trip, we followed a sign pointing up a steep track to ‘Seaview Bungalows’. It took us through a silent, tree-filled resort called the Lamai. Half way up, we got off our scooter to the sound of a breeze sweeping through the leaves and insects strumming in the bushes.

The only human presence was a woman carrying laundry up a stepped path to the top bungalows. We followed her, but even under the shade of the trees it was heavy going.

We arrived, bathed in sweat and breathing heavily, to a crystal clear view under blue sky stretching across the island, the sea glistening on both sides. Rainforest, rubber tree plantations, coconut groves, fields of tall grass and bushes of colourful flowers fell away beneath us. 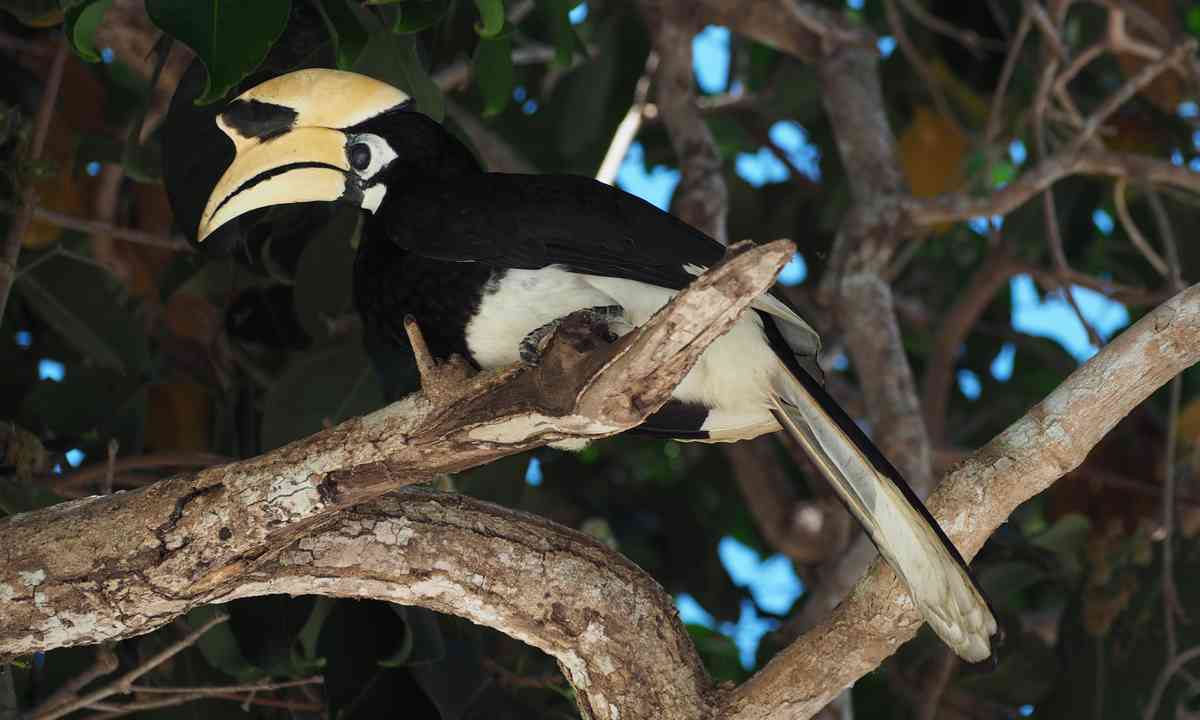 Exotic butterflies, their 'strings' pulled by some drunken puppet master, danced around us. Above us, eagles and kites soared over land and sea. Asian pied hornbills shot from tree to tree, shrieking as they went. These unusual birds are all over the island, shouting their presence from inside leafy trees and occasionally coming down to feed from rice and leftovers thrown out by the restaurant kitchens. After a few weeks, we were shocked to realise that seeing them had become almost commonplace.

It’s not just the wildlife that is unique on Koh Phayam. The island is also home to a small community of indigenous people of the Andaman Sea. They are variously called sea-gypsies, chao ley, chao nam, selung, salone or chalome, loose terms that are used for any kind of nomadic seafaring tribe. These people refer to themselves as Moken. They are hunter-gatherers, living a frugal existence between the land and the sea. 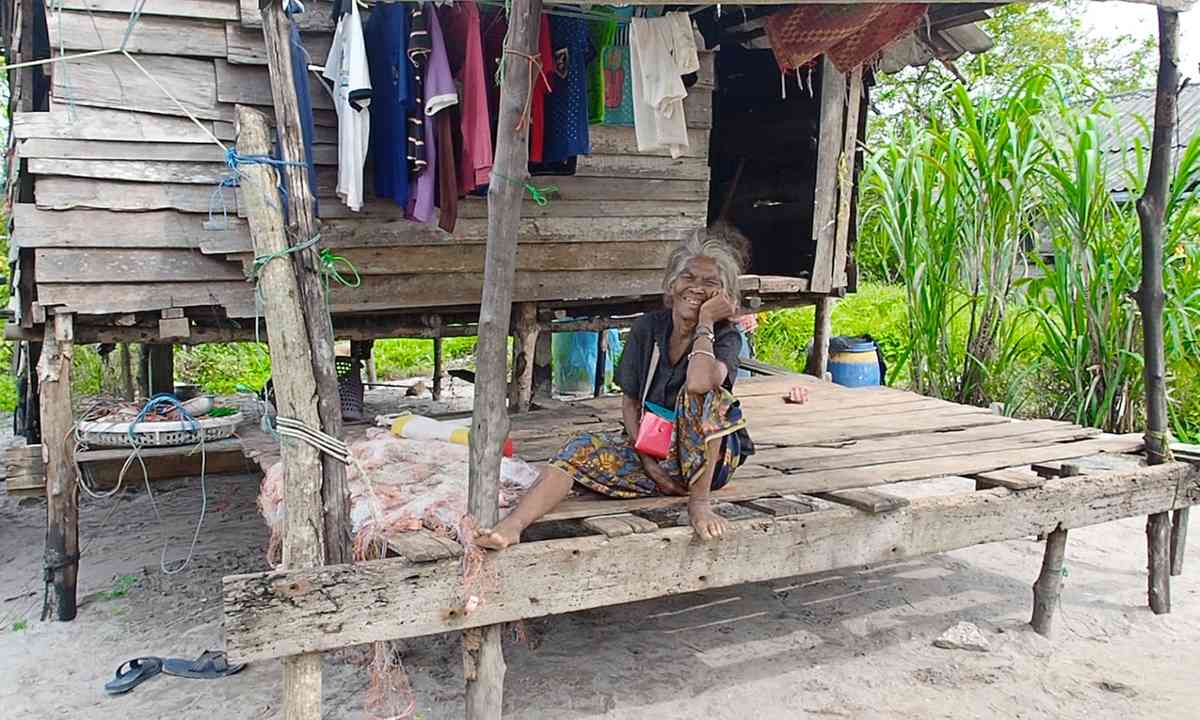 The small settlement we visited is situated behind mangroves, on a promontory between the two main tourist beaches of the west coast. You can only get there by dinghy or along an overgrown dirt trail. There is a sign outside the village requesting visitors to dress conservatively and to be respectful. Some of the Moken are happy to engage with visitors by smiling and posing for the camera, but others do not want to talk and or have their pictures taken.

I felt a little uncomfortable, like I was trespassing on their privacy, but we walked the whole route through the settlement and received different levels of greeting from nodding and looking away to the laughter of old women and curiosity of children. Most people were busy making intricate woven fishing nets or some other fish-related paraphernalia. There was also one group of older people playing a serious game of cards, which seemed to require a lot of discussion between hands. We smiled and nodded when appropriate and made an unfussy retreat once we reached the end of the path. 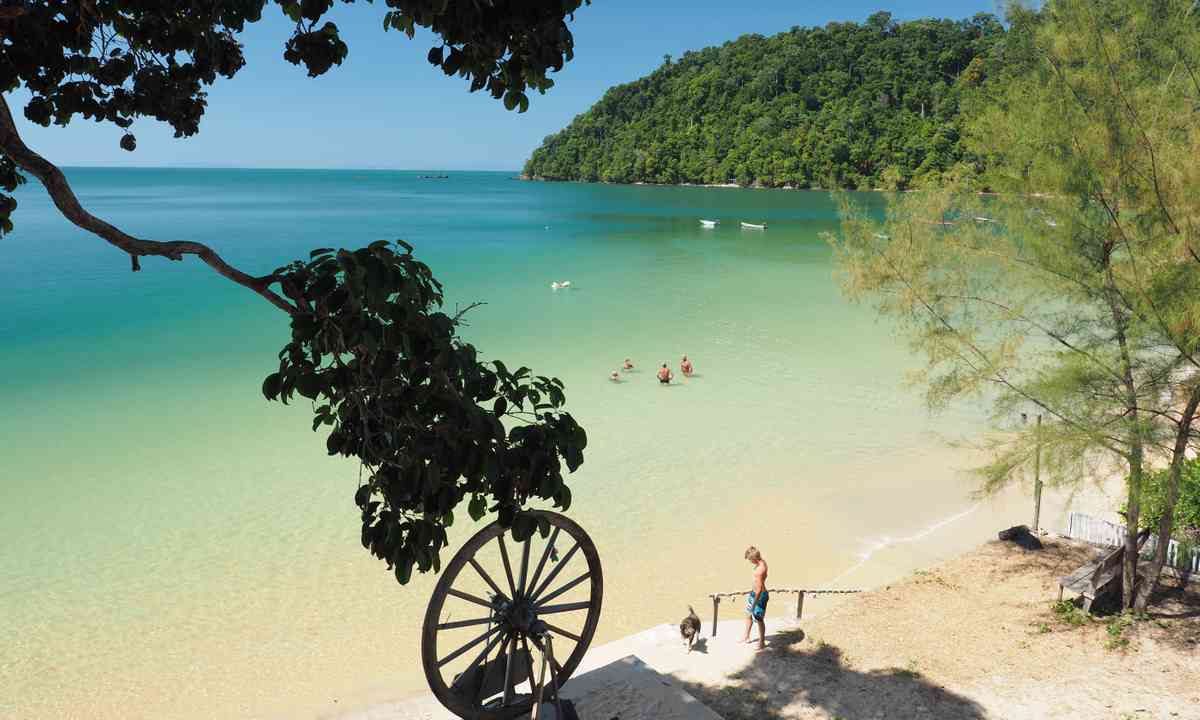 The view from The Sun resort (Jamie Furlong)

Back at The Sun, the big news was that a new chef had arrived. In one day, the curries became recognisable Thai dishes, delights like Vietnamese fresh rice spring rolls, fish burgers and proper chips were added to the menu and every dish was spectacular.

Sadly, it was time to leave. Amid tearful farewells, we pulled up the hook and headed northwards to Koh Chang Noi.

Also known as Little Koh Chang, Koh Chang Noi is Thailand’s northernmost island in the Andaman Sea. It is renowned for being an even more laidback that Koh Phayam.