After a few months stuck on land, sailor Liz Cleere hits the water again and heads for the legendary hongs of Thailand's Phang Nga Bay

We said 'goodbye' to the marina in the late afternoon and 'hello' to our first anchorage in a few months. It was good to be back 'on the hook'. Swinging with the tide as the breeze blows across the deck is one of the simplest pleasures of living on the water. You don’t have to be far from land, or even far from other boats, to experience the overwhelming sense of freedom that sweeps through your body and lifts the spirits.


By this time, I was spooked and asked Jamie to turn back.

After the best night’s sleep in weeks, we set sail to Thailand's Phang Nga Bay, in the Strait of Malacca, between Phuket and mainland southern Thailand, the marine section of the Ao Phang Nga National Park. Like a mini version of Halong Bay in Vietnam (but without the crowds) the northern part of Thailand's favourite cruising ground is littered with startling limestone karsts. Tunnels, funnels, channels and caves honeycomb the islands and rocks, and if you choose your travel company carefully, or travel independently, it is possible to get off the tourist timetable and be the only visitors there. 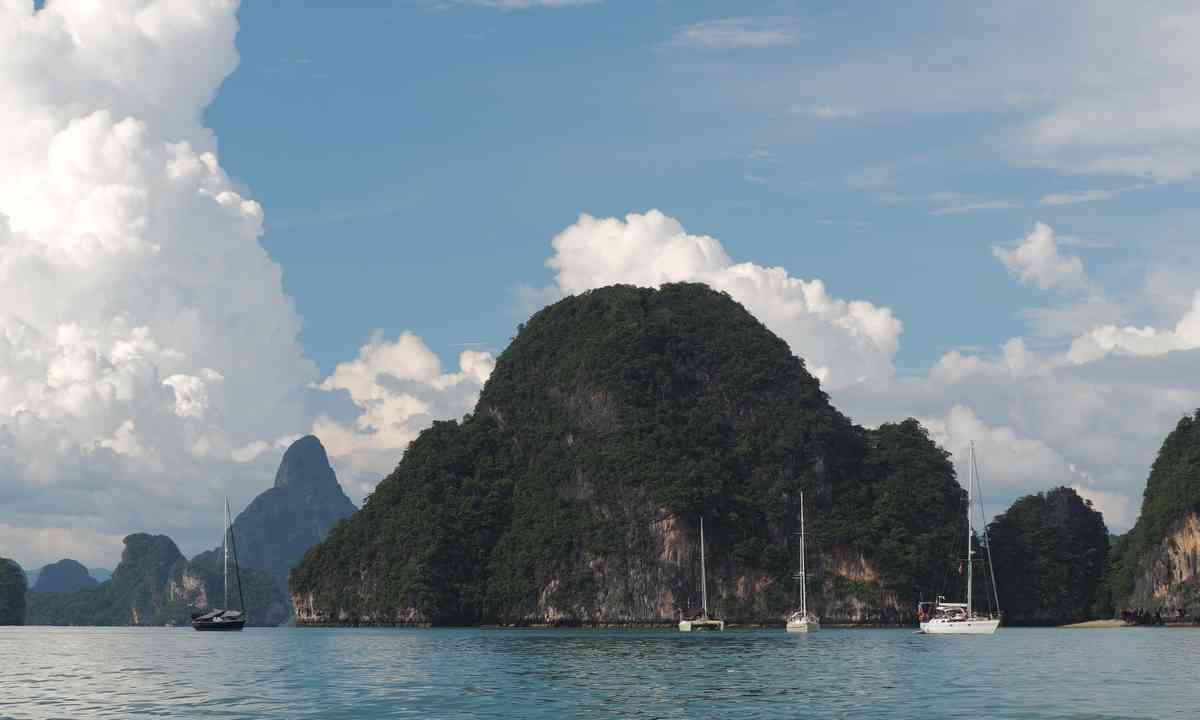 Sailing in Thailand is like nowhere else, with the weather and sea state changing hourly. In one morning the topography morphs from white sand beach to vertical cliff, and as you look up from a swimming monitor lizard, Brahminy kites and sea eagles circle overhead, or perhaps bats hang from the roof in a pitch-black cave.

Earlier in the year, we had spent some good times anchored close to the sandy beaches, snorkelling over coral reefs. The vertiginous cliff faces of Ko Ha had been staggering, but now it was time to investigate the geological equivalent of Swiss cheese in the islets and rocks within Phang Nga Bay.

Our first stop was Koh Phanak, a long thin island that marks the beginning of this distinctive area. It runs from north to south, providing shelter for anchoring yachts in either monsoon. Winds were coming round from the north east, so we chose a spot towards the north western tip which faced directly across from the island’s famous ‘hong’. Translated as ‘room’, hongs are collapsed caves formed within limestone pillars by rock erosion.

The life-giving humidity of the tropics means that any horizontal, and many vertical, surfaces are covered in plants and trees of one kind or another. As this dense vegetation dies and rots, it forms more soil on which new life flourishes. Rainwater percolates through the slowly building soil and through the limestone, creating holes as it reaches sea level. Eventually, the soil becomes too heavy for the pitted rock and sinkholes come crashing through the middle, forming the classic hong. 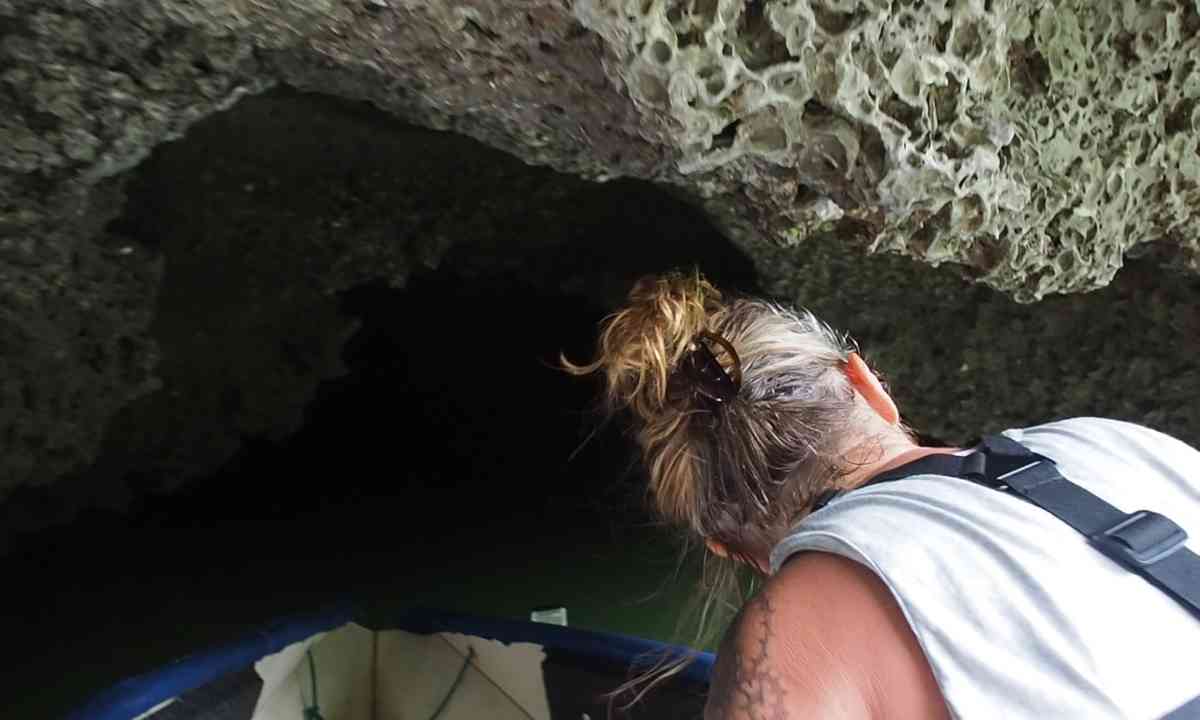 Sizing up the entrance to Ko Phanak cave (Jamie Furlong)

According to our navigation chart, there was a cave directly in front of where we had anchored through which it should be possible to reach the biggest hong on the island. The only problem was that the shallow entrance could only be reached at mid tide. If you wait until low tide, the water reveals impossibly sticky mud. Too high, and the entrance is sealed by water. We calculated we still had a short window to make our first recce into the cave before the falling tide made it impassable, so we prepared torches, cameras and recording equipment for our first tentative sortie.

Inside the tunnel, green stalactites had formed into organic sculptures and white stalagmites appeared ghost-like through the gloom. The use of outboard motors and any loud noise is forbidden on the islets because it upsets the fauna, so we paddled our way further into the cave. All was silent except for the occasional dripping of water through the warm, windless air. Around the first corner, we encountered utter blackness and the fluttering of nocturnal wings. By this time, I was spooked and asked Jamie to turn back. I used the excuse that I was concerned about missing our exit, but I was also conscious that there were no other boats around: what did they know that we didn’t? 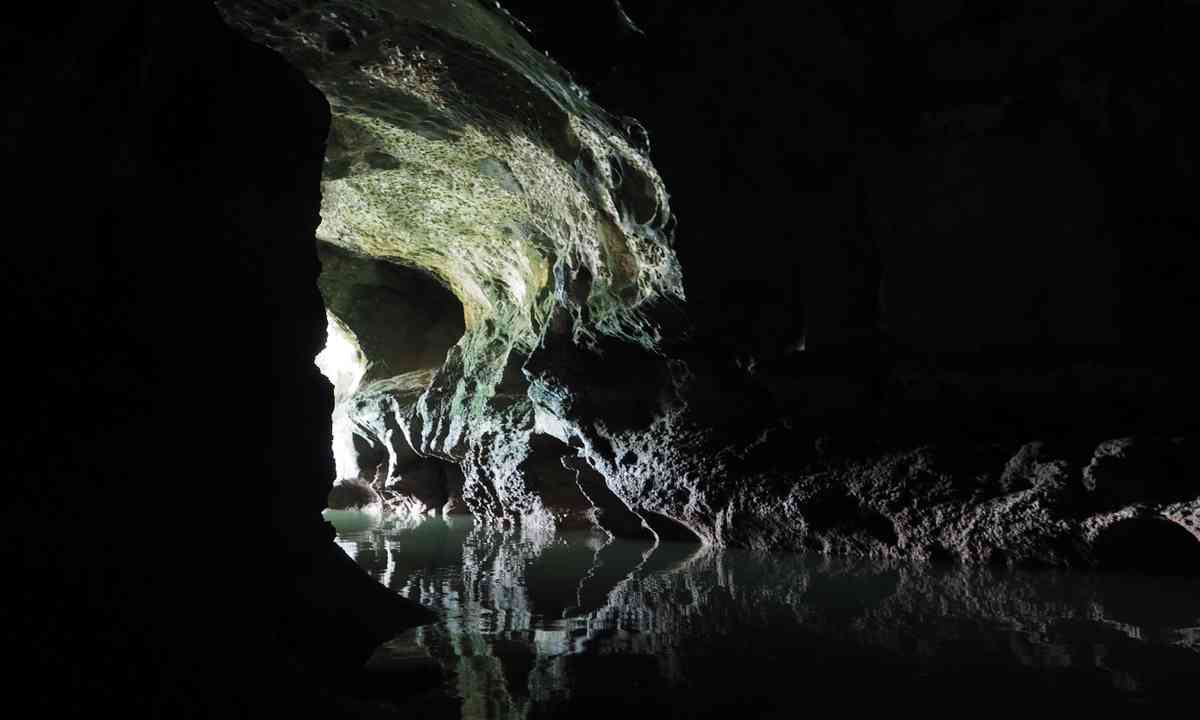 Light at the end of the hong (Liz Cleere)

But I shouldn’t have worried. Within a couple of hours, two day boats packed with visitors turned up and anchored right outside the entrance. Their guides waited until after sunset when the sea once again covered the mud, and we watched what seemed like a 150 people row into the caves. We sipped our beers and planned our next move.

By the following morning, I had grown some courage, so just after sunrise we went back, this time on a rising tide. We were once again on our own as we passed the previous night’s track in darkness and silence. The tunnel widened into a high vault, then veered off to the left. Above us, sleeping bats hung in their hundreds from the ceiling. We continued to paddle and drift with the current in peace. A little further along, the faintest daylight began to illuminate the walls and overhangs, then intensified as a literal light at the end of the tunnel appeared.

We pulled our way under jagged rocks into the hong. As the rods and cones of our eyes blinked into life, we were stunned by the intense colours of the walled lagoon which spread in front of us. Every surface was covered in brilliant greenery; birds chatted, insects thrummed and small fish splashed in the shallow water. It felt like we had crossed snow-capped mountains to reach Shangri-La. All we could do was gawp and smile. 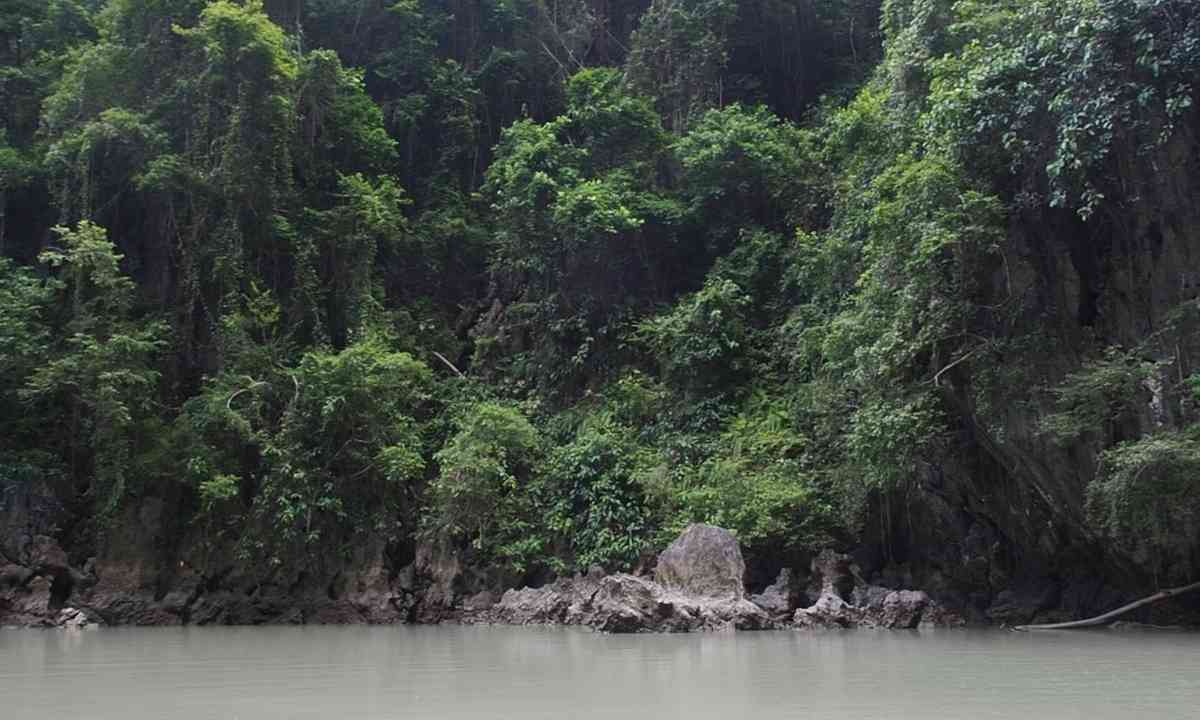 The other side (Liz Cleere)

But this time it was Jamie’s turn to be jittery. The height of the exit was rapidly decreasing and if we didn’t move sharpish, we would be trapped in this place till the next mid tide. Which might not have been such a bad prospect had we been equipped with food and water. So we went back through the tunnel and marvelled at nature’s works of art all over again, this time from a reverse angle.

Ko Phanak had shown us our first hong and we wanted more.