Where to experience indigenous culture in British Columbia, Canada

Canada’s western province is the place to immerse yourself in the history, traditions, legends and ceremonies of the country’s diverse first inhabitants...

Between the Pacific Ocean and Rocky Mountains, British Columbia (BC) is Canada’s westernmost province. It is also the second-most visited by international tourists, drawn to the scenic beauty of its vast wildernesses as well as Canadian wildlife greats such as grizzly bears and orcas, ancient rainforests, majestic mountain ranges and scores of islands, lakes and waterfalls. Plus there’s another compelling reason to visit. British Columbia is home to Canada’s most diverse indigenous cultures.

Long before the arrival of Europeans, the original inhabitants – the First Nations, Métis and Inuit Peoples – lived here in what is now known as BC for more than 10,000 years. They developed unique societies, customs, traditions, territories and laws. Lifestyle and culture evolved distinctly depending on whether one lived on the north-west coast or in the Northwest Plateau, between the Coast Mountains and the Rockies, leading to vast differences between the peoples. They are united, however, by a deep connection to nature, a rich oral tradition and respect for elders. Indigenous community perform during the celebration of Hoobiyee in Vancouver (Alamy)

When explorers and settlers arrived in the mid-18th century, the indigenous numbered in the thousands. Today, there are approximately 200,000, about 4% of BC’s 5.2 million residents. British Columbia is Canada’s most diverse province for indigenous peoples, home to 198 distinct First Nations, one-third of Canada’s total. And with 34 living languages and close to 60 dialects spoken, BC also counts the most First Nations languages.

With such a richness of cultures and a visitor-focused economy, British Columbia has a vibrant and ever-growing indigenous travel industry in all six of the province’s diverse regions, helmed by Indigenous Tourism BC (ITBC). The Coast Salish, Nuu-chah-nulth and Kwakwakaw’akw are experts at navigating the Pacific Ocean around Vancouver Island; northern BC is home to many distinct indigenous peoples, including the Nisga’a, Haida and Tahltan; the Cariboo Chilcotin Coast, which spans the province’s lower middle from the Pacific Coast to the Cariboo Mountains, is the territory of the Secwepemc, Tsilhqot’in, and Dakelh; the Vancouver Coast and Mountains is homeland of the Coast Salish people, including Squamish, Lil’wat, Sto:lo, Musqueam and Tsleil-Waututh; the Nlaka’pamux, Okanagan and Secwepemc First Nations live in the Thompson Okanagan region; while the Ktunaxa inhabit the rugged Kootenay Rockies area.

By choosing indigenous-owned and -operated tourism experiences, travellers share in living languages, cultures and traditions, gleaning understanding and creating more meaningful connections to people, land and wildlife. The following are six places for visitors to get a taste of the many diverse indigenous experiences on offer in British Columbia.

Read next Catch up with our British Columbia virtual event 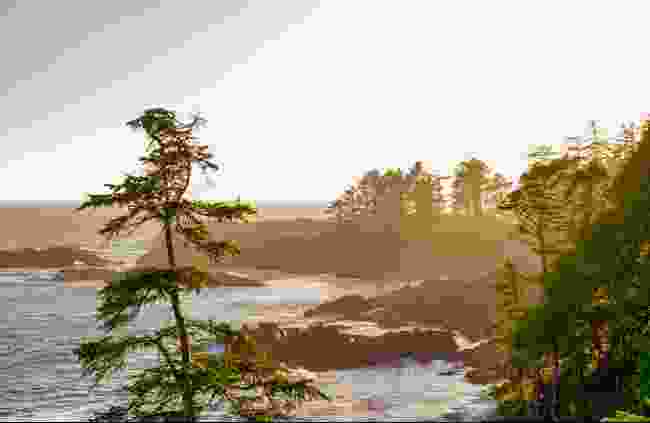 In an old-growth rainforest on the rugged west coast, the Yuu-thlu-ilth-aht (Ucluelet) First Nation built Wya Point Resort on the prior site of a village outside Ucluelet. Choose from tent and RV camping or waterfront yurts with private access to Wya Beach or nine luxurious ocean-front timber lodges built with local red cedar. Raised on stilts, each lodge is designed by a local carver and artist and named for an important animal. The totem poles in each are works of art. 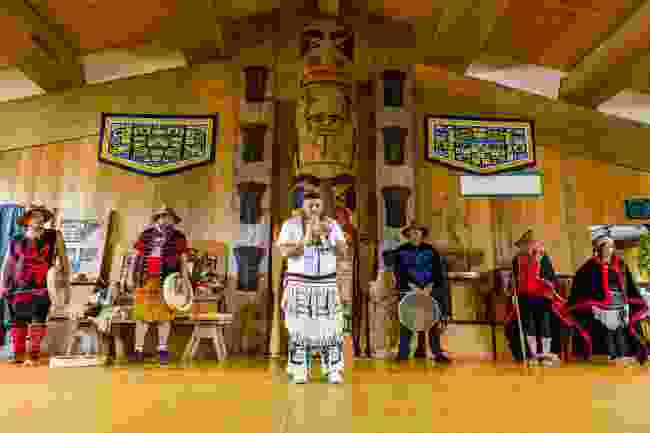 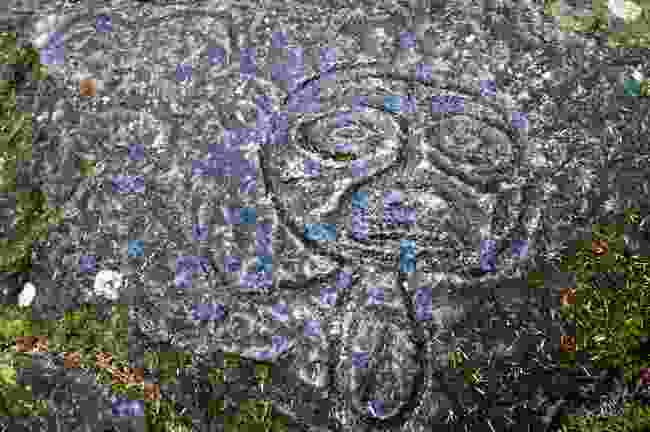 Deep in the Great Bear Rainforest – part of the world’s largest coastal temperate rainforest – beneath a canopy of red cedar trees lie the 10,000-year-old Thorsen Creek petroglyphs. Hike into the Bella Coola Valley site with Copper Sun Journeys. At moss-covered rocks etched with carvings by his Nuxalk ancestors, Chris Nelson interprets their meanings and shares, through words and songs, the Nuxalk people’s story “through our eyes, right from creation through to smallpox and the potlatch ban, to today.” 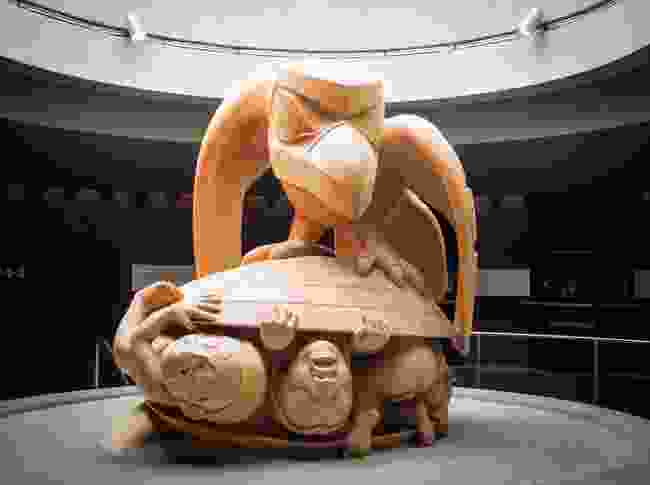 The Squamish Lil’wat Cultural Centre in Whistler showcases the art and heritage of the Squamish and Lil’wat Nations – Salish-speaking Coast and Interior neighbours. The Great Hall is crowned by a 12-metre Salish hunting canoe carved from a single cedar tree. Join a cultural ambassador for a tour or make a drum or dreamcatcher. In Vancouver, the Museum of Anthropology at UBC highlights First Nations works, which include a glass-walled Great Hall with towering poles and house posts. Don’t miss the world’s largest collection of pieces by famed Haida artist Bill Reid. 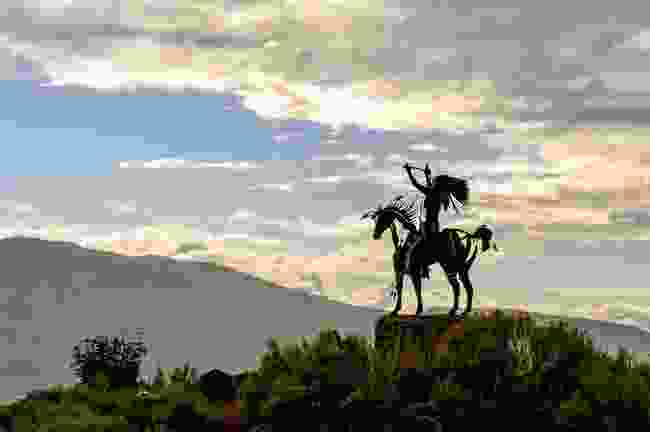 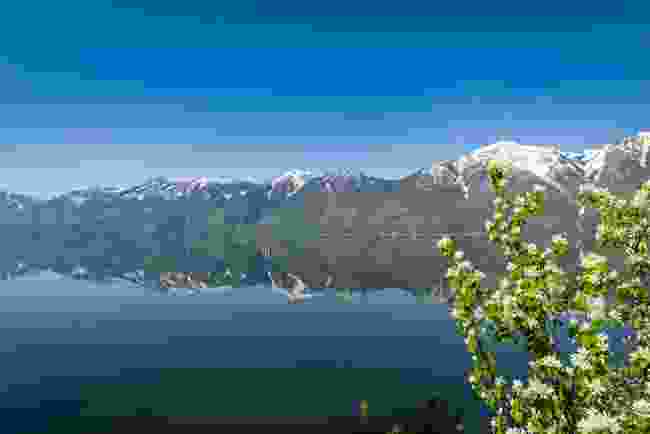 Nestled into the mountainside along the shore of Kootenay Lake, Ainsworth Hot Springs Resort is in the traditional homelands of the Ktunaxa. After battle, warriors soaked in the medicinal spirit waters. Today the healing hot springs are still a place for good medicine. Bathe in the mineral-rich restorative waters in a natural horseshoe cave or in the lounging pool, and then indulge in a treatment, like a steamy body wrap with wild medicinal plants, in the refurbished Spirit Water Spa.

The best places to visit to experience indigenous Alaska