For a deeper understanding of Alaskan culture, experience indigenous traditions first-hand alongside its native population

The chance to hear the haunting song of humpback whales or to watch one breach draws two million visitors to Alaska each summer, more than half of whom visit on a cruise. But beyond its wildlife and scenery, there’s also a wealth of culture to be found in the USA’s most-northern state. To fully appreciate Alaska, it’s important to meet native Alaskans, who’ve inhabited this corner of North America for more than 10,000 years – long before Russia colonised much of its coast in the 1700s. But despite the Russians introducing disease and forcing Alaska’s original inhabitants into slavery – before selling the region to the USA in 1867 – native culture survived.

“The people coming to the city of Sitka had no idea there are native Alaskan people living here,” says Chuck Miller, who created the Sitka-based dance troupe Naa Kahídi Dancers in what was once the capital of Russian America. “The only thing they hear on the cruise ships is, ‘the Russians this, the Russians that…’ I wanted to educate visitors.”

Today, around 15% of Alaska’s 731,500 residents belong to native groups, roughly associated with the state’s five regions. The Arctic north is home to Iñupiaq and St Lawrence Island Yup’ik; the interior and south-central regions are the Athabascans’ homeland; the south west belongs to Yup’ik, Cup’ik, Unangax and Sugpiaq while Tlingit, Haida, Eyak and Tsimshian inhabit the south-east’s Inside Passage.

The regions’ natural resources led to distinctive cultural differences between the tribes. Coastal communities such as the Iñupiaq and St Lawrence Island Yup’ik hunted whales, seals and walrus, while the Athabascans in the interior migrated depending on the season and availability of food, camping along rivers to fish in summer. Trade between communities was common, so they built canoes and dog sleds to transport goods.

The south-western native Alaskans lived in lodgings that were partly underground, while those in the south-east used cedar trees to build plankhouses and totem poles. The latter featured clan crests and images of wolves, eagles and mythical creatures which were carved into tree trunks. These poles recorded legends, treaties, crimes and life events. The significance of a pole was explained during raising ceremonies, but these stories were passed down orally through generations, so many have now been lost.

Today, visitors can gain an insight by meeting totem pole carvers and experiencing a weaving class or even a raven dance. Here are six places to escape the cruise ships and discover indigenous Alaskan culture for yourself... 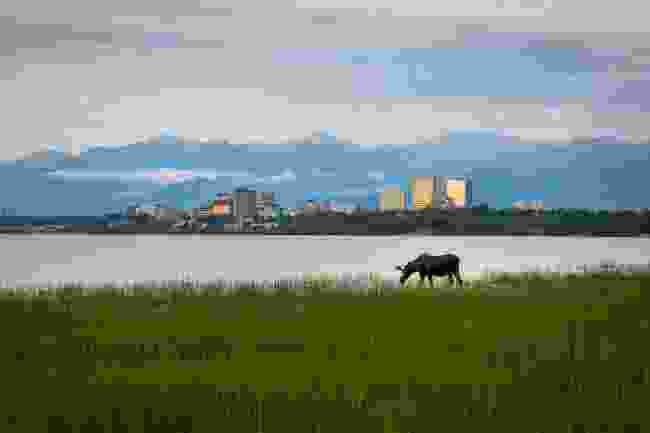 A moose in Anchorage, USA (Shutterstock)

The state’s largest city is home to the Anchorage Museum, which honours native heritage through soundscapes, storytelling and a permanent exhibition that features everything from ceremonial masks to an embroidered dog blanket. At the Alaska Native Heritage Center, meanwhile, you can learn native dances and games, listen to storytellers and watch traditional art being made. You can also meet elders at native dwellings set around a lake. Each structure represents an ethnic group; look out for whale bones at the Iñupiaq site and an Athabascan food cache. 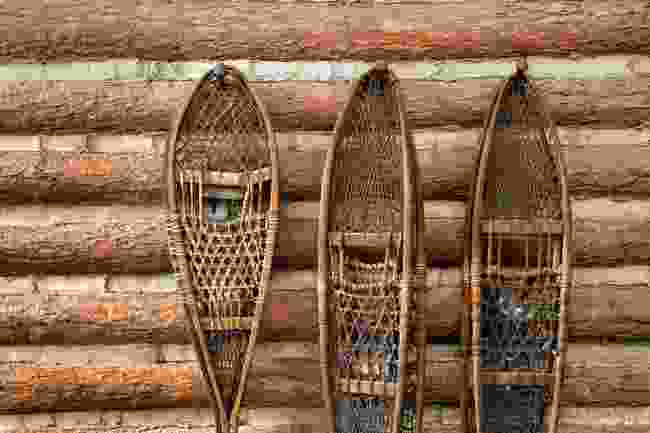 Only accessible by plane or boat, Ruby is an Athabascan village on the Yukon River in the interior region, home to just 160 people. Here you’ll meet George Albert, an Athabascan Living Cultural Treasure according to the Alaska State Council on the Arts. George makes dog sleds and snowshoes from birch and moose skin. Stay at Empty Nest Bed & Breakfast, and try its locally-caught king salmon. 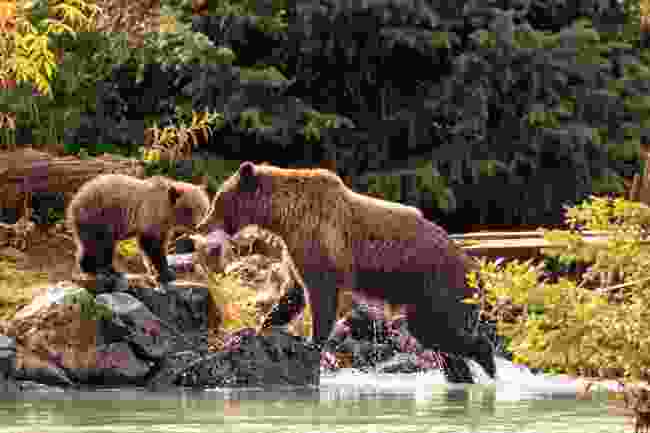 The Kodiak Brown Bear Center on Camp Island is owned by Alutiiqs, which is the Sugpiaq way of describing the original residents of the south-west’s Aleutian Island archipelago. Traditionally, Alutiiqs hunted bears, but these days, visitors watch the ursines instead. As the centre is only accessible by seaplane or helicopter and guests are limited to six, visitors have plenty of opportunities to listen to the hosts’ stories about their heritage as they sit around the firepit. 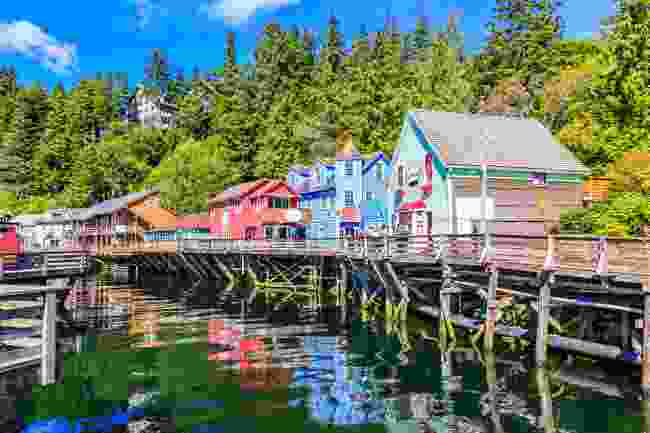 Ketchikan’s Totem Heritage Center in the Inside Passage has one of the world’s largest collections of unrestored 19th century totem poles. Visitors can browse carving tools such as axes and scythe-like adze and take classes in carving, basketry and ‘ravenstail’ weaving. In town, you can also meet Ken Decker, a Tsimshian pole carver, who owns Crazy Wolf Studio downtown. 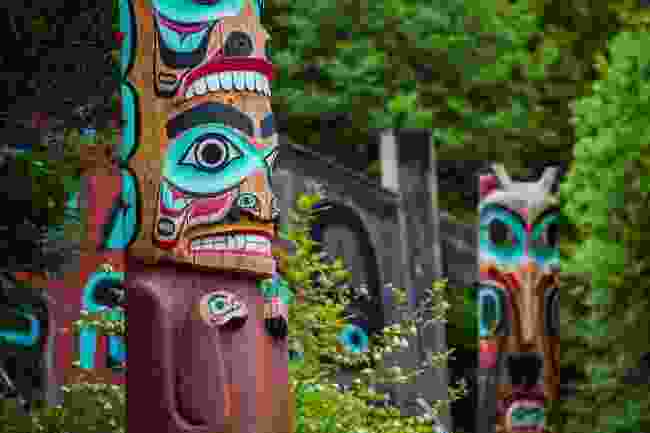 Also close to Ketchikan is Saxman Totem Park, where you can watch Nathan Jackson at work. Nathan’s craft – which has been displayed in London’s Horniman Museum and Washington DC’s Smithsonian National Museum of the American Indian – has earned him a National Heritage Fellowship, the USA’s highest award in folk and traditional arts. “Once when I was younger, I carved a 3m pole in seven days, but I was working like crazy,” laughs Nathan, 82, who’s also known by the Tlingit name Yéil Yádi (Raven Child). “Nowadays I spend more time talking about poles than carving them.” 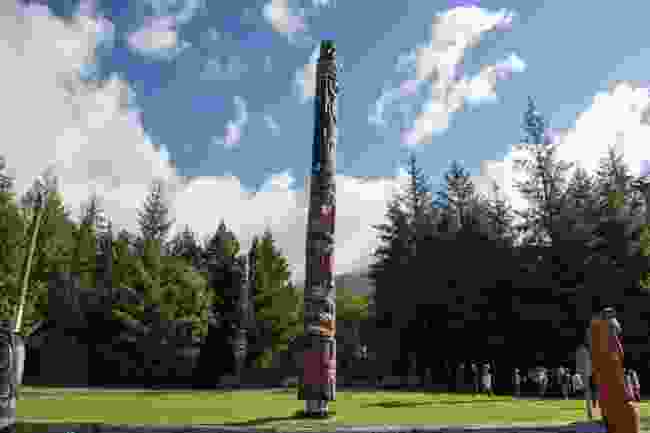 Sitka Naa Kahídi Dancers perform at Sheet’ka Kwaan Naa Kahídi Tribal Community House in Sitka in the Inside Passage. The dancers perform native tales such as the raven dance wearing regalia decorated with shells and clan crests. ”Raven ignored a party invitation because he didn’t think highly of the hosts,” explains Chuck, who is part Tlingit, part Haida. “But when he found out they were serving great food he disguised himself and went. He was treated so well that he thanked the hosts by teaching them to dance.” The audience is invited to participate at the end. “By the time visitors see our show, they’ve not only seen dancing, drumming and singing, they have a better understanding of the Tlingit people.”

Read more about indigenous culture in the USA:

A journey up the Mississippi from sea to source