How to find your own island paradise in Thailand

Five miles to the north of Koh Phayam, in Ranong province, is Koh Chang, Thailand’s northernmost island in the Andaman Sea. Don’t confuse this Koh Chang with its big noisy brother off the coast of Cambodia or the uninhabited limestone stack in Phang Nga bay, both of the same name.

This sleepy island is a throwback to the tranquillity and peace found in Thailand by the first intrepid backpackers. Still with no hot water and with electricity switched on via a generator for an hour or two at night, Koh Chang has retained its rawness.

Passing smaller coves, some fringed with mangroves, it took just an hour of peaceful sailing to reach Ao Yai ('Big Bay'), aka Long Beach, where we dropped the hook. The sand appeared to be charcoal grey from SY Esper, but when we took the tender ashore we discovered it was striated with black, yellow and white grains.

At first there didn’t seem to be many places to eat or sleep, but peering under the pines, palms and banyans, which grew up to the shore, colourful bungalows emerged from the shadows. 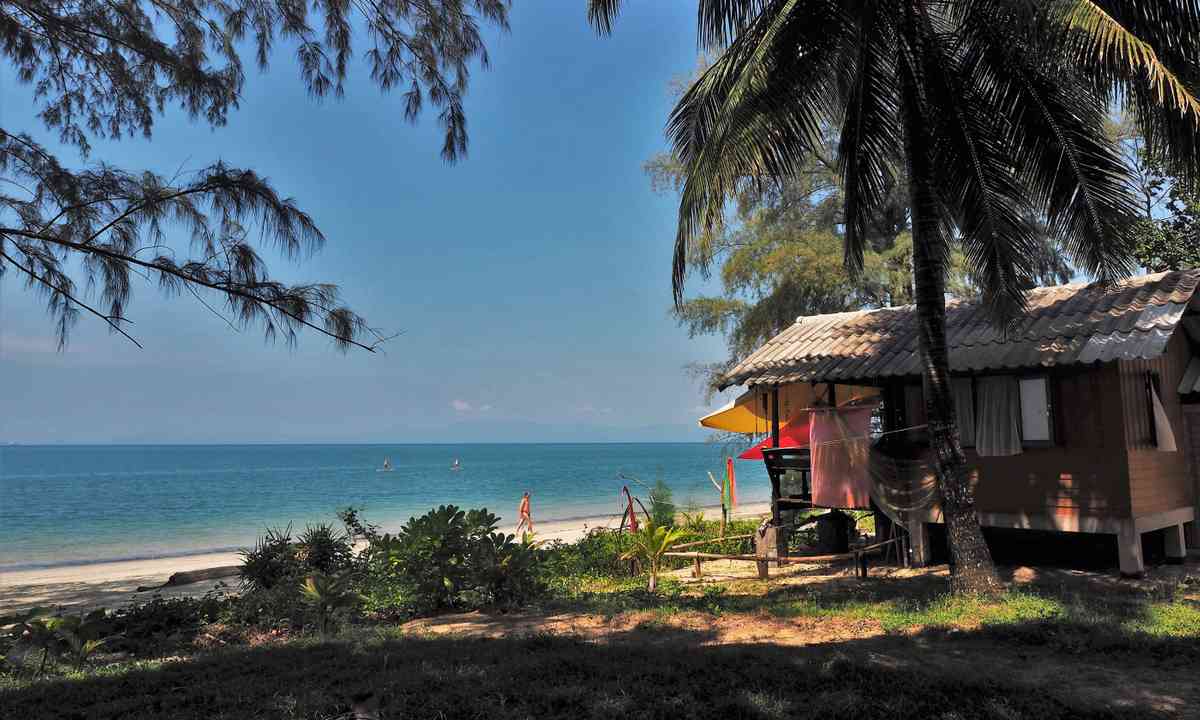 “I think it is less popular than Phayam because the beach is not typical white sand,” Deanna, owner of Café on the Rock, told me. “But also the authorities here will not allow any development, and it has not changed at all since I arrived.”

Deanna, from Germany, discovered Koh Chang eight years ago while on holiday. She fell in love with its serenity and with one of its inhabitants. They now have a daughter who was chatting to us in perfect English.

“She is trilingual,” said Deanna. “She learns English at school or from tourists, Thai from speaking with her friends or German from me. I think her English is better than mine.”

Our travels have taught us that English is becoming the international language, one that partners and friends of different nationalities use to communicate with each other. Deanna has only basic Thai, so communicates mostly in English.

By far the largest contingent of visitors to Koh Chang are German. We didn’t meet any from the UK or Australia apart from other cruisers, and yet everyone spoke flawless English. This easy way to communicate has made us lazy, and we regret not having taken lessons in Thai when we first arrived here.

The Café on the Rock started off as a bakery on the hill above Long Beach. Over the years, Deanna and her husband have added a bar, a café, a tattoo parlour, open rooms on stilts and hammocks strung between trees, all set round a small courtyard.

It’s the kind of place where you can spend the day just chilling, reading and snacking in the shade while contemplating the idea of a bamboo tattoo. What to have? Where to have it? We drank our tenderly-made coffee and salivated over the warm, fresh bread, while taking in the view.

Koh Chang faces Burma’s Mergui Archipelago, and in geological terms is itself part of that seldom-visited group. The horizon is scattered with hazy peaks and rocks jutting out of the blue sea, with promises of pristine islands, untouched coral and wildlife.

For us, it remains a dream, because to sail your own boat in Burma is an expensive business, running to thousands of dollars. If the bureaucracy changes and the fees are reduced in the future, it remains our Number One destination. Like most cruisers, we are always looking for the most remote places to visit. 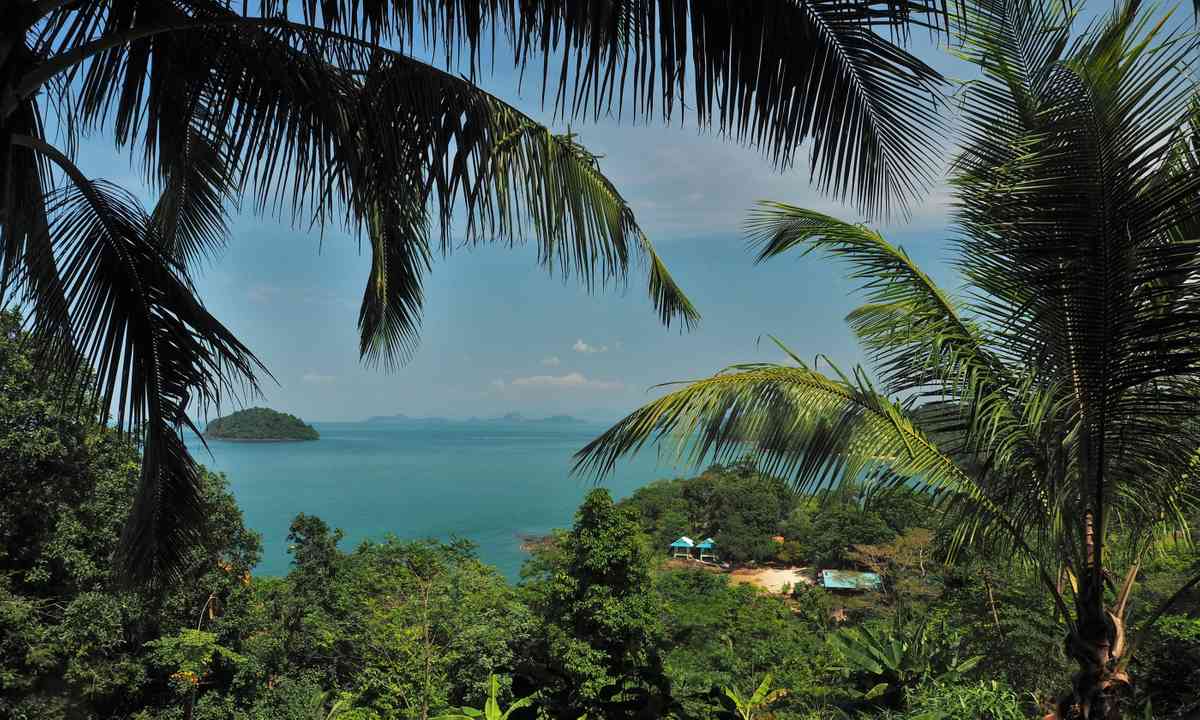 View across the islands (Jamie Furlong)

Although Deanna is probably right about most tourists yearning for the postcard-perfect white sand beach, her second reason for Koh Chang remaining frozen in the 1980s is probably closer to the mark. Its strict laws on development mean that only the northern part of the island has a few concrete roads. These are joined by mud paths, with a 'village' (nothing more than one shop and a couple of restaurants) at the crossroads.

There is a tiny school and a medical centre, but the rest of the island is protected rainforest with rubber and cashew plantations in the more accessible areas. This means that trekking and walking are big attractions for the island, where visitors can immerse themselves in the wildlife or make their way to small coves and inlets, which they have to themselves.

The island tends to attract long-stay visitors who while away the days reading in the hammock on their bungalow porch, or take slow walks through the jungle and along the beaches. We met a number of couples who come back year after year, usually to the same bungalow. There are few families. T tends to be older people or those looking for quiet isolation who come to Koh Chang. I can think of few places better to write that novel or to hone your painting and drawing skills. 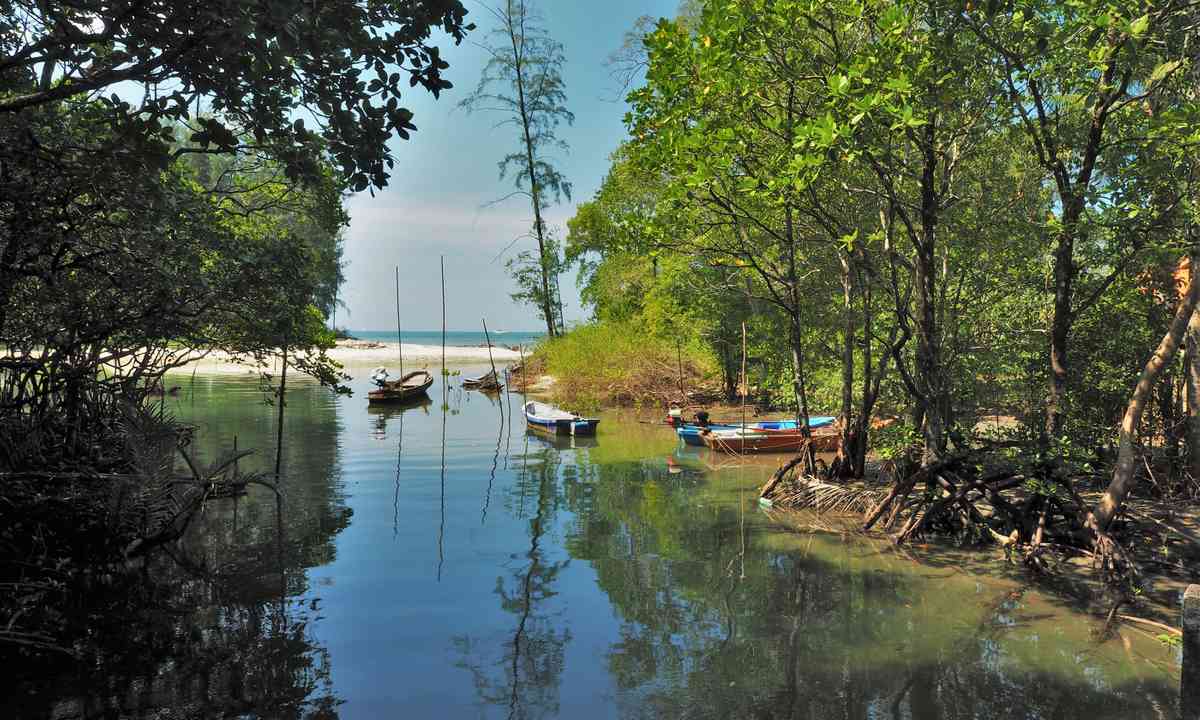 At night, the shoreline looks quite different, and you become more aware of the bungalows and shacks that lie under the trees. Twinkling lights appear, usually candles or coloured bulbs powered by generators. People walk along the beach silhouetted by torchlight.

Most of the time it is quiet. There is no banging music here unless it is party night, when everyone from the island, tourists and locals alike, gathers in one of the few larger bar areas around beach fires.

Fresh fish from The Freedom Bar, right opposite from us, became our regular evening meal. At less than 200 baht and cooked straight out of the ocean, it was juicy and flavoursome with added local spices.

We keep thinking we have found the best island in Thailand, but so far nowhere has beaten Koh Chang.